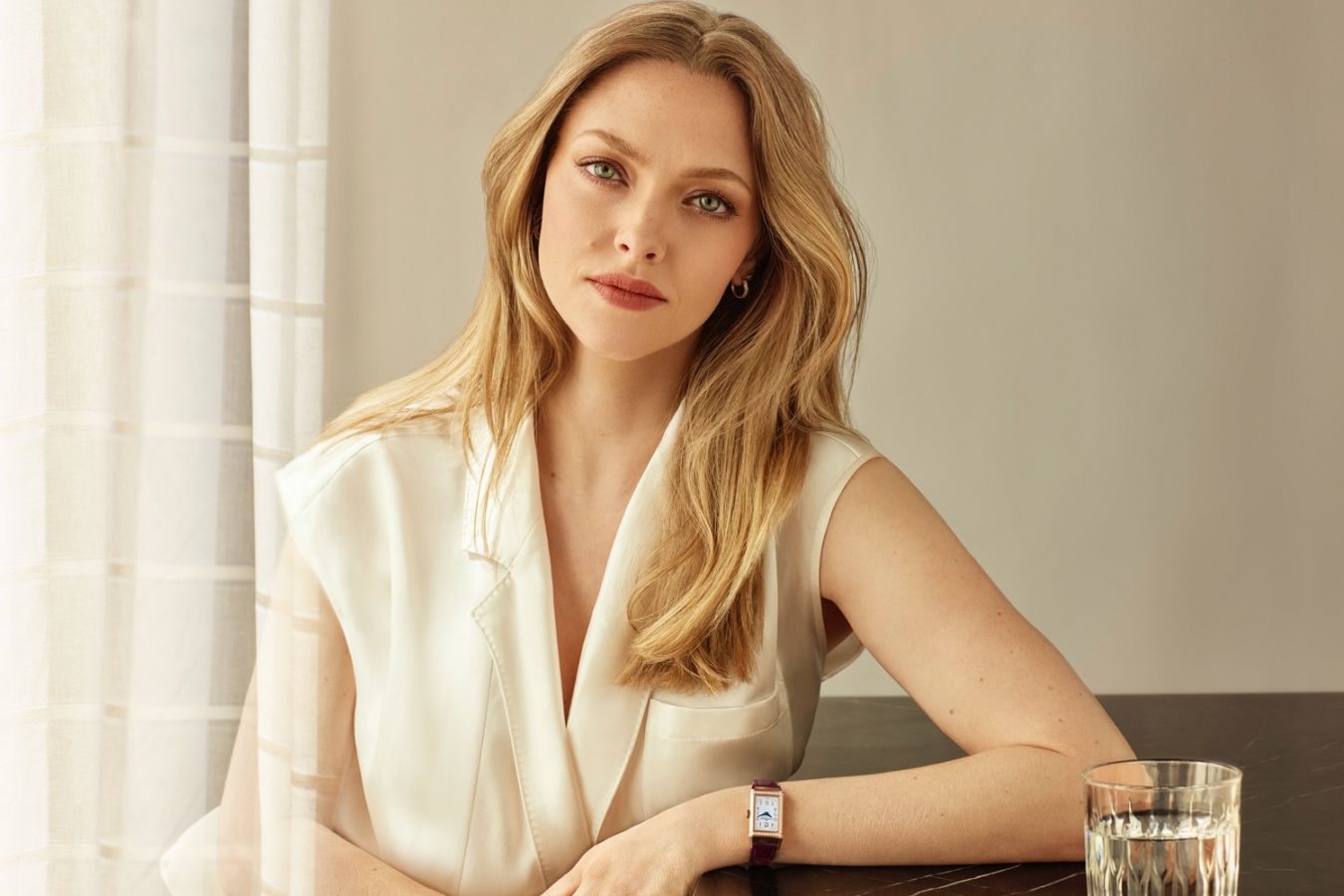 Amanda Seyfried’s standout performance as Marion Davies in the biographical drama Mank earned her an Oscar nomination and proved to be a pivotal point in her career. In an exclusive interview, the actress and Jaeger-LeCoultre ambassador tell us more about her film, Art Deco costumes, the Reverso, and her own inimitable style.

There’s never been any contention about Amanda Seyfried being funny; her breakout role in Mean Girls (2004) has transcended the ages and generations have memorised her various punchlines. No one without a formidable sense of humour could also have tattooed “minge” on their left foot. But Seyfried has also proved herself an absolute angel following her roles in Mamma Mia! (2008) and Les Miserables (2012), in which she used her wide blue eyes to her biggest advantage and blessed our ears with her piercing vocals.

Recently, it’s her role in the acclaimed movie Mank that has editors and film critics praising her nuanced performance and calling the film a turning point for her career. Seyfried was nominated, for the first time, as a Best Supporting Actress at both the Golden Globes and Oscars for her portrayal of Marion Davies, a screen star in the 1920s and ’30s who captured the heart of newspaper mogul William Randolph Hearst, and whose relationship became the impetus for the plot of Citizen Kane

Directed by David Fincher, Mank follows the life of screenwriter Herman Mankiwicz, played by Gary Oldman, and his memories of the lavish times he spent with Davies and Hearst. It’s a big Hollywood moment for the 35-year-old actress, who’s equally poised and effervescent at work, but most comfortable when she’s at home at her farm in the Catskills, with her animals, husband Thomas Sadoski and their two children.

The star recently did a photoshoot with Jaeger-LeCoultre to mark 90 years of the brand’s most recognisable watch, the Reverso, with its dual faces, distinctive swivel-case design and rich Art Deco codes. The campaign was shot by Alique, a Dutch-born and New York-based photographer and artist known for her effortless portrayals of her female subjects. Under her lens, Seyfried, a friend of the maison, radiates an air of calm and quiet confidence. Much like the watch she wears – a pink-gold Reverso One Duetto Moon styled on both a matching bracelet or with a burgundy-red leather strap – Seyfried doesn’t need to shout to be heard. Her attitude and her work speak volumes for themselves.

The Reverso was created in the 1930s and, as the story goes, it was designed as a response to polo players who asked for a watch that could be turned around so the crystal and dial were protected during a match. The watch’s Art Deco cues are unmistakable – it’s deceptively angular but there are no strong edges, and the three grooves on the upper and bottom of the case profile give it just the right amount of flair without being excessive. On one side, the dial is in beautifully etched sunburst, while the other side it’s bolder – dark burgundy, with an elegant moon-phase indicator for a touch of romance. One thing’s for sure: Reverso’s design has remained virtually unchanged for the last 90 years.

“If I had to define the Reverso, I’d say: timeless, innovative, pristine,” says Seyfried, adding that she likes watches that can be worn with anything – a shirt or a dress – yet still fits her style, which she describes as “loose, casual and androgynous”. Her own favourite Jaeger-LeCoultre is from the Master collection.

“I like the refined, clean, detailed look of a watch, and I never felt as if I found one that fit me,” she says. “I’m attracted to men’s watches – the Master is the most attractive watch I’ve ever seen. And so, I notice that kind of look in watches, that big, round, beautiful, clean, classic watch face. It’s solid, versatile, sexy and sharp. You can see the time from a mile away.”

Seyfried has been a friend of Jaeger-LeCoultre since 2019 and says she sees a solid friendship between them for as long as their values continue to be aligned. In a way, selecting her business partnerships are a somewhat similar process to her getting into character. She once described how she connects with her various roles by finding common things between herself and her characters. When it came to connecting with Marion Davies, Seyfried says, “It’s easy to feel misunderstood as a woman and as someone in the public eye. People assume things about me, and I try too hard to prove I’m a real person in most cases.”

Mank was set in the ’30s, around the time that Art Deco was at its peak and the Reverso was born. In homage to the movies of the era, it’s filmed in black-and-white. Costume designer Trish Summerville was the mastermind behind the elaborate clothes from Hollywood’s golden era.

Seyfried didn’t wear the watch on set but muses, “The Reverso can be worn with anything, casual or dressed up.” Her favourite costume was the delicate dress-and-hat ensemble she wore in the scene where Davies visits Mank in Victorville. “That open back was so delicate and special,” she says.

“I loved walking in Marion’s shoes,” she adds. “The gowns and the accessories helped so much to get me into character. The fashion was deliberate and chic. Nothing felt too tight or revealing, which is exactly my speed. “Marion knew exactly who she was and what people needed from her and used that to her advantage.”

Still, comedy is in Seyfried’s soul: “I have a lot of fun with comedy and wish I did more. The challenges in comedy are more fruitful.” She’s talked about wanting to play a musician, combining two of her greatest passions, singing and acting. She also finds joy playing a mother and thinks it would be fun to play a cop someday.

Opportunities are undoubtedly plentiful. Seyfried recently completed filming for A Mouthful of Air and a short film called Birdwatching. She also plays Elizabeth Holmes in the Hulu miniseries The Dropout, which chronicles the rise and fall of the now-defunct health-tech company, Theranos, and is currently in post-production.

With the world still adjusting to the pandemic, however, Seyfried says, “The fewer places I have to travel to, the better. I’m happiest when I know I’m going to be with my kids. And if I’m working, I have to be passionate about the story, the character and the people I’m working with. Life’s too fast.”

The story first appeared on The Prestige Hong Kong.