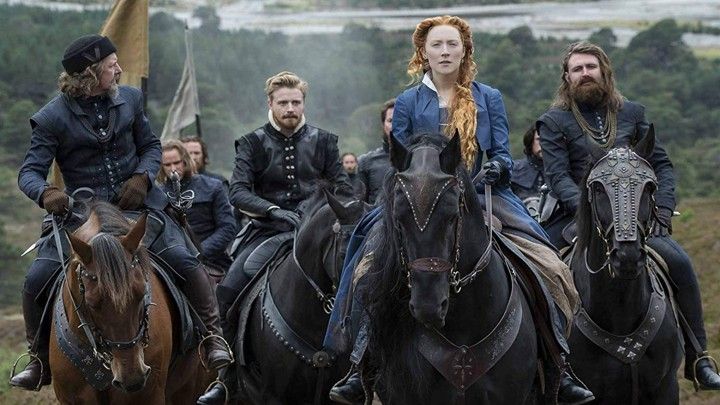 Set in 1561, Mary Queen of Scots brings together two very compelling performances by Saoirse Ronan and Margot Robbie.
The film opens with young Mary’s (Saoirse Ronan) return to Scotland to claim her throne, after the death of her husband, the sovereign of France. In Scotland, she is welcomed by her half brother Earl of Moray. Mary is the Catholic Queen of Scotland. In neighbouring England, her cousin Queen Elizabeth (Margot Robbie) is the Protestant Queen of her state and threatened by Mary’s claim to her throne. Queen Elizabeth by choosing not to marry or have kids, has no actual heir to her throne but is unwilling to consider Mary. In order to have Mary let her guard down Elizabeth is advised by her council to insist that Mary marries an Englishman and they add it should someone who is loyal to Elizabeth. Elizabeth sends her reluctant lover, Robert Dudley to propose to Mary, but sensing something is amiss Mary insists she will marry only once she is named the heir.
Meanwhile, advocating religious freedom in Scotland by allowing her subjects to choose who wish they worship, Mary falls out with her court cleric John Knox. Mary dismisses him, only to have to him conspire against her and form a rebel group. When Queen Mary against the advice of her brother chooses to marry Lord Darnley, who charms her into agreeing to marry him, Moray leaves her court to join the rebel forces.

Will Queen Mary be able to hold on to her crown against her rebels and stake her claim on Elizabeth’s England, forms the rest of the story.
While the story is based on the book ‘Queen of Scots: The True Life of Mary Stuart’ by John Guy, the film’s stuffed screenplay oscillates too often between the Queens of Scotland and England. Without either Mary or Elizabeth’s story being fleshed out fully to satisfaction. And the long stays on the reactions of the ladies in waiting of the Queens amount to not much finally.
Yet there are dramatic moments to reckon with. Like when Mary discovers her husband’s infidelity, or how Elizabeth’s bout with small pox leaves her wanting to revel more in life’s simpler joys. Some touching moments like Mary asking her cousin to be her new born child’s godmother and it almost feels like the sisters might reconcile. And then the most compelling of them of all is the secret meeting between Mary and Elizabeth, shot in a stunning fashion – this face off scene highlighting both the actress is simply sparkling!

Mary Queen of Scots has been nominated for Oscars in the Hair, Make-up and Costumes category. And it’s easy to see why! Designed by Alexandra Bryne who won an Oscar for her costumes in ‘Elizabeth – The Golden Age’, the costumes form their own character in the film. The voluminous gowns, the delicate royal jewellery, the exquisite headgear and hairdo’s – all form a motif intrinsic to the quality of the Queens. Queen Elizabeth’s look through the course of the film is ultimately formidable and powerful, crowned with her hairdos. Queen Mary in shades of indigo layered with lace and fur at times is elegant yet very striking! Their costumes reflect their intrinsic shades of character – Queen Elizabeth focused and committed to her throne to the point that she never marries and Queen Mary whose marriages end up being used against her.
The cinematography is top notch blending into mood of the period. But ultimately it is the powerful performances by Saoirse Ronan and Margot Robbie that shine through.
Cast: Saoirse Ronan, Margot Robbie, Jack Lowden, Joe Alwyn, David Tennant, Guy Pearce
Director: Josie Rourke
Rating: 3 stars Running time: 125 minutes
Entertainment Reviews Movies european films Film review
Sreeparna Sengupta

Film Entertainment
Sign up for our newsletters to have the latest stories delivered straight to your inbox every week.