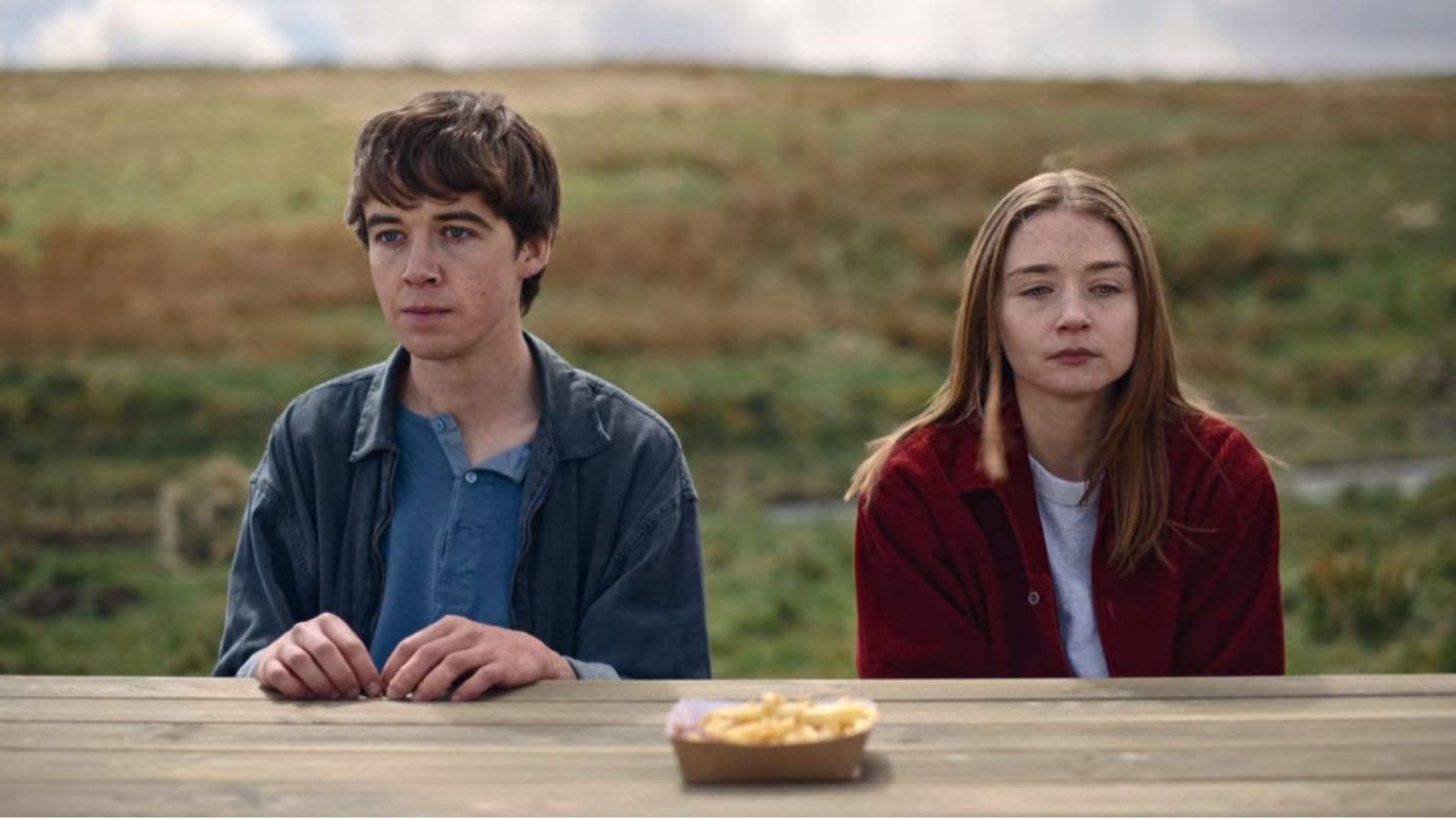 With Netflix overflowing with new content and shows, viewers often get confused about where to start. While some may have a great plot, others are packed with action; while some episodes are intensely gripping, others are laugh-riots. Apart from all the immensely popular series, there are many hidden gems that may have missed the limelight. So, if you are wondering what to watch next, check out some of the most underrated Netflix shows from our list.

With streaming platforms being flooded with all new movies and series, viewers may find it difficult to choose from the array of options in front of them. Besides, there are a few underrated TV shows on these OTT platforms that have not been able to garner attention, but make for some great streaming options. From all the adventures in End of the F***ing World to the bewildering crimes shown in Dirty Money, if you wish to watch some good shows on Netflix, which may not have created the necessary buzz, keep scrolling.

When the director of The End of the F***ing World and producers of Stranger Things come together, something stupendous can be expected on screen. And, I am Not Okay With This is the best example.

With just one season, the series has all the right ingredients to keep you glued to the screen for a fun binge-watching night. 17-year-old Sydney Novak (Sophia Lillis) is an awkward high school student who simultaneously deals with family drama and a one-sided crush on her best friend. However, she makes her way through everything while taming her newly surfacing superpowers.

Helmed by Jonathan Entwistle with Christy Hall as its executive producer, this underrated dark comedy series on Netflix is inspired by Charles Forsman’s comic book of the same name, and also stars Wyatt Olef and Sofia Bryant.

Watch I am Not Okay With This here.

Teenage romance, crime thriller, comedy and lots of drama — this series portrays oddly different protagonists in the most fascinating way. Though it did gather some attention when it was released on Netflix, it fizzled out soon.

Alyssa (Jessica Barden) and James (Alex Lawther) are two 17-year-old high school classmates. Alyssa is a rebellious adolescent and James believes he is a psychopath, and sees himself as a budding serial killer. While James targets Alyssa as his first victim, he soon finds himself embarking on a road trip with her to escape home in search of her biological father.

This coming-of-age series sees the two young adults come together for a journey like no other. It has two seasons and stars Naomie Ackie, Steve Oram and Christine Bottomley as well.

Watch The End of the F***ing World here.

Set in 1970s New York, this understated musical drama traces the rise of hip-hop in the American metropolitan city. Created by the iconic Baz Luhrmann with a screenplay penned by Pulitzer Prize-winning playwright Stephen Adly Guirgis, The Get Down is undoubtedly a must-watch.

The story is about a bunch of teenagers from the South Bronx neighbourhood who have their own dreams to make it big in the music field. And, impeccable performances by Justice Smith as Ezekiel ‘Books’ Figuero, Shameik Moore as Shaolin Fantastic and Herizen F Guardiola as Mylene Cruz among others, breathe life into these soulful characters with very relatable stories.

Watch The Get Down here.

Imagine three mothers from the suburbs pulling off a heist and making Breaking Bad-like money. What follows is a roller-coaster of events as things spiral out of hand for these women. This thriller-comedy series stars Christina Hendricks as Beth Boland, Mae Whitman as Annie Marks (Beth’s sister) and Retta as Ruby Hill, their friend.

This series has high-paced crime sequences interspersed with family drama, making it an entertaining watch. It aired on NBC for three seasons and just as the TV show started getting some loyal viewers, it was suddenly cancelled. However, a Netflix revival did garner attention but it failed to create the same buzz.

Based on Lucy Maud Montgomery’s 1908 children’s book, Anne of Green Gables, this Netflix show, set in the early 19th century, depicts the life and journey of Anne Shirley-Cuthbert (Amybeth McNulty), an orphan girl who goes to stay with an unmarried brother-sister duo Marilla (Geraldine James) and Matthew Cuthbert (RH Thomson).

Anne is a high-spirited talkative girl who is full of life, and viewers are taken on her adventures as she finds her way through various obstacles.

The three-season-long underrated series was expected to have a fourth season, however, it was cancelled by Netflix and CBC in 2019.

Watch Anne With an E here.

Raising a 7-year-old kid has never been so difficult and challenging as it is for single mother Nicole Warren (Alisha Wainwright). And, as she reels from the untimely death of her husband (played by Michael B Jordan), Nicole finds out about her son Dion’s (Ja’Siah Young) superhuman powers, which makes things tough for her.

The show is an adaptation of Dennis Liu’s comic of the same name. Being one of the most humorous shows for kids, the series tells the story of a mother who protects her son from his own abilities and prevents the world from knowing about them.

With the second season being dropped in February 2022, it is about time that this underrated show gets noticed.

Set in inner-city Los Angeles, the show is about a bunch of four extremely close friends who go through the ups and downs of their lives as they try to navigate through school.

This coming-of-age story highlights the adventures of Monse Finnie (Sierra Capri), Cesar Diaz (Diego Tinoco), Ruby Martinez (Jason Genao) and Jamal Turner (Brett Gray), who are growing teenagers of colour. It depicts their bond right from freshman year to high school. Their strong friendship is put to test when they begin thinking about their future and what’s in store next.

This show might have failed to catch the attention of viewers, but with four seasons, it is definitely a simple and fun binge-watching option which will not disappoint.

Watch On My Block here.

Easy dives into the lives of several individuals (living in Chicago), trying to find a grip over modern living, relationships, sex, technology and general knowledge. This hidden gem is an anthology series with perfectly scripted standalone episodes that do not need you to watch them in sequence.

Though it does have some continuing characters which appear throughout the three seasons, Easy makes a remarkable watch if you are looking for something different yet relatable. Directed by Joe Swanberg, this series stars some familiar faces like Elizabeth Reaser, Jane Adams, Judy Greer, Aubrey Plaza and Marc Maron.

This is one of those underrated Netflix series that deals with very different kinds of crimes. While it may not involve serial killers and gory bloodshed, it focuses on unimaginable white-collar crimes that are sure to give you goosebumps.

The Netflix description gives an apt synopsis of what to expect in this two-season show. It says, “From crippling payday loans to cars that cheat emissions tests, this investigative series exposes brazen acts of corporate greed and corruption.” Crimes including tax evasion and insurance scams of billions of dollars make this a must watch.

It features former US President Donald Trump and shows how these stories were unearthed.

Created by Lisa Hanawalt, this animated series may remind you a bit of Bojack Horseman. This show tells the story of two daring and fearless bird best friends — Tuca (voiced by Tiffany Haddish) and Bertie (voiced by Ali Wong), who are in their thirties and explore female sexuality.

Steven Yeun has given his voice to Speckle, Bertie’s boyfriend, and together with the vivid animation and visuals, the series is a must-watch for comedy lovers. Though the series just has one season, each of the 10 episodes shows the birds’ approach an impending midlife.

Though Tuca & Bertie was cancelled on Netflix after 2019, it continued on Adult Swim.

The Curious Creations of Christine McConnell (2018)

Are you a foodie who enjoys horror flicks? Well, eschewing from the typical recipes of a horror series, this is a rather different horror comedy which is a great option for a light-hearted spooky night.

Christine McConnell is a gifted baker but with a dark secret lurking below what meets the eyes. Her delectable recipes give rise to some delicious fluffy bread, cookies and other chocolate confectionery items but there is something eerie and haunting about them. This show lets you tuck into some bread skulls and clawed whoopie pies freshly baked from her oven. Some odd and scary creatures roam around her place, while a gothic air looms over.

Starring Christine McConnell in the titular role, the show also features Colleen Smith as Rose and Adam Mayfield as Norman.

(Main and featured image credit: The End of the F***ing World/ IMDb)

Hip Hop Netflix Netflix series shows underrated
Trinetra Paul
An ardent foodie, Trinetra seeks every opportunity of travelling and writing. Storytelling and slam poetry are her go-to jam. Her lazying around ideas includes binge watching and whipping up some snacks or searching the next place to visit.
Sign up for our newsletters to have the latest stories delivered straight to your inbox every week.