Grim news getting you down? Here’s new music to uplift your spirits

Culture
Grim news getting you down? Here’s new music to uplift your spirits
Share this article
Next article

As the COVID-19 pandemic continues to spread across the world, musicians are keeping their fans entertained with home concerts and other digital initiatives. Here is a selection of four items of music news you might have missed recently. The Canadian musician continues to promote his new studio album, ‘After Hours.’ In addition to dropping visuals for several of his ‘After Hours’ singles, The Weeknd shared a deluxe edition of the critically-acclaimed follow-up to 2016’s ‘Starboy’.

The deluxe edition of the album features the new bonus songs ‘Nothing Compares,’ ‘Missed You,’ and ‘Final Lullaby’.

The full-length also includes a remix of ‘Heartless’ by Vapor Wave featuring rapper Lil Uzi Vert, one of ‘Save Your Tears’ by Oneohtrix Point Never, one of ‘After Hours’ by The Blaze as well as one of ‘Blinding Lights’ by Chromatics.

This deluxe-edition drop likely boosted the sales of ‘After Hours,’ which granted The Weeknd his fourth No. 1 album despite the rapid spread of the COVID-19 pandemic in the United States. The Louis Vuitton menswear artistic director Virgil Abloh filmed the visual during the recent Paris Fashion Week, which took place just one month before Pop Smoke was killed during a home invasion in Los Angeles.

“This video is real-life footage. This is barely a ‘video shoot,'” the preface of the clip reads. The visual finds Pop Smoke and Quavo enjoying themselves in the City of Lights, where the pair dine at a fancy restaurant and drink wine with Parisians.

“[Pop Smoke’s] impact will live on thru the art he left us. In this case, it was the night after the [Louis Vuitton] show while we had the cameras rolling inside & outside a typical French restaurant in my neighbourhood,” Abloh recently said of the project, which marks the first posthumous video to be released since Pop Smoke’s death. 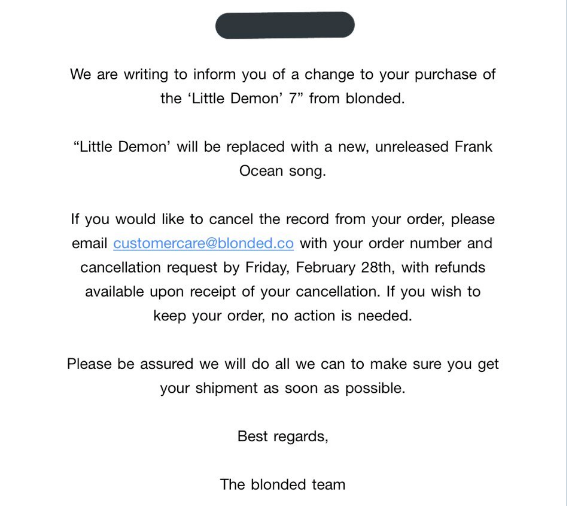 The singer-songwriter previewed the pair of new songs back in October, during his first-ever PrEP+ club night in New York City. Although the singles have yet to hit streaming platforms and digital storefronts, Ocean offered 7″ vinyl editions of ‘Dear April’ and ‘Cayendo’ on his website.

The 7″ vinyl editions of the singles come with acoustic versions of the songs on the A-sides and remixes by Justice and Sango on the B-sides. Also, previewed during his PrEP+ club set, ‘Little Demon’ was also supposed to be released on vinyl.

The elusive R&B singer cancelled the planned release in late February, with fan accounts reporting at the time that Ocean will instead ship a vinyl copy of an upcoming and unreleased song.

The R.E.M. frontman took fans by surprise when he shared a first-take demo of his latest collaborative project with Dessner, ‘No Time For Love Like Now.’ The National member took to Twitter to discuss his collaboration with Stipe, revealing that they had been working together on several additional projects in the past.

Absent from music since R.E.M. broke up in 2011, Stipe returned in recent months with the solo singles ‘Your Capricious Soul’ and ‘Drive To The Ocean.’ Earlier this March, the musician covered R.E.M.’s 1987 hit “It’s The End Of The World As We Know It (And I Feel Fine)” in a new coronavirus safety video.

This article was published via AFP Relaxnews. Featured image: Getty

Beauty & Grooming
Beauty For Real: Actress, Insta-influencer and mother of two, Roshni Chopra’s beauty bible
Gear
‘Postcards from Isolation’: a project to reunify people amidst the pandemic
Culture
Top 10 releases: Here’s your guide to what to watch online in June
Style
This is how influencers are giving loungewear an upgrade
Travel
These air services will be back on their wings from June 2020 onwards
Gear
7 Lesser-known, ‘Made in India’ apps you’re missing out on
Beauty & Grooming
Why is it expensive: The super exclusive SK II Facial Treatment Essence
Gear
The greatest hackings pulled off by hacktivist group, Anonymous
Style
The most iconic bags created by JW Anderson
Sign up for our newsletters to have the latest stories delivered straight to your inbox every week.

Top 10 releases: Here’s your guide to what to watch online in June