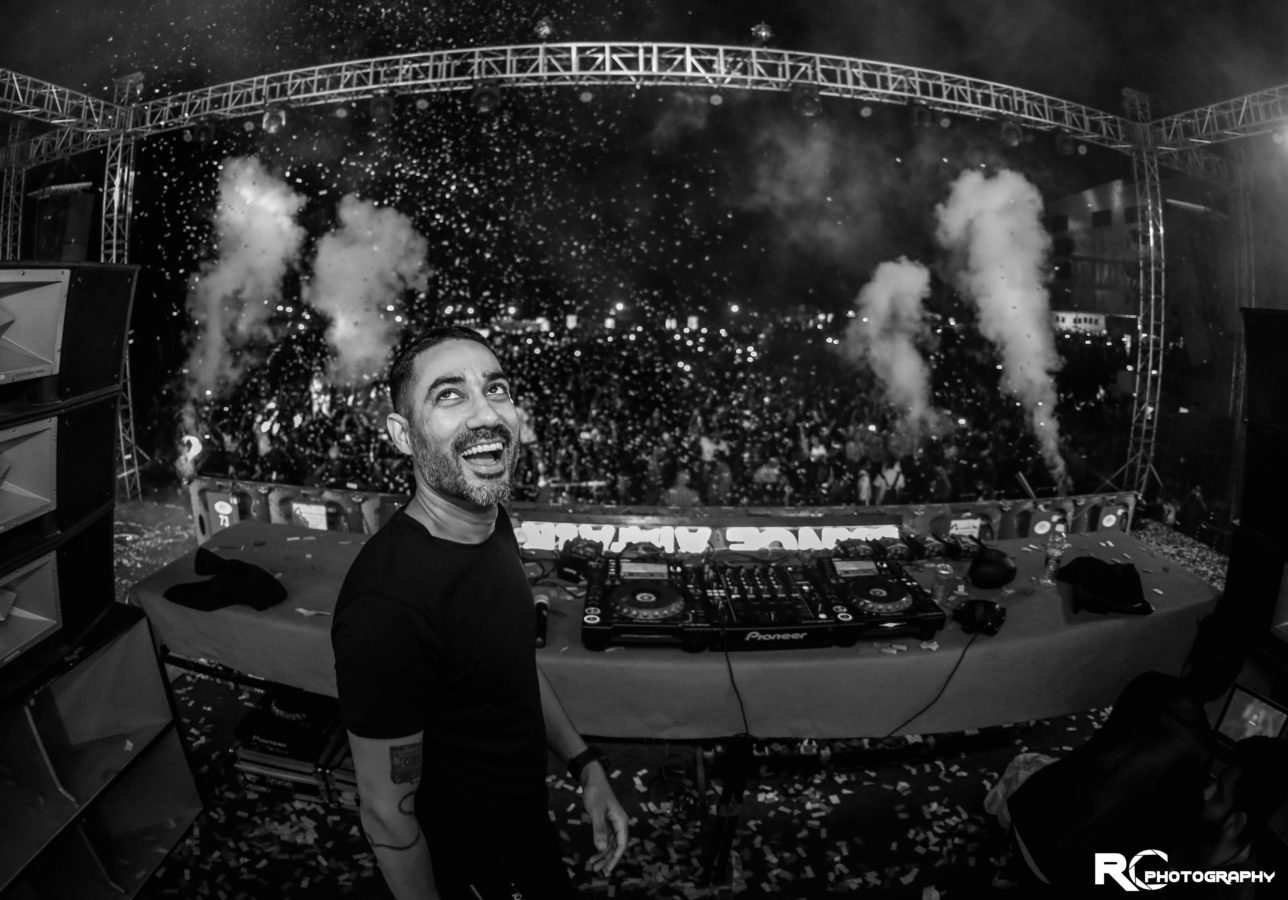 In one of the biggest-ever collaborations for an Indian musician, Nucleya has released a song with Major Lazer. The DJ & Producer talks about what brought about this alliance, and his journey that led up to this moment.

Jadi Buti came out last week, and chances are it will hit one million views on Youtube by the time you read this. Udyan Sagar, who goes by the stage name Nucleya, joined hands with the global dance music trio, Major Lazer (producer Diplo, and DJs Walshy Fire, and Ape Drums) for this track, released as a part of the latter’s album Music Is The Weapon. The trio has toured India twice, but your most prominent memory of them is most likely their song Lean On, which they shot in India and was the youth anthem in 2015.

And for the uninitiated, Nucleya is the gent behind popular releases such as Bass Rani (2015), Let’s Nacho (2016), Raja Baja (2016), and considered the face of independent music in India. Jadi Buti also marks Nucleya’s debut with the record label Mad Decent, which has managed international artists such as Nicki Minaj, Mace, French Montana, and more.

Making no bones about it, Jadi Buti solely revolves around marijuana. Bringing together his desi bass and Major Lazer’s global bass, the upbeat track is a lighthearted take on the herb that has had India in a tizzy these past few months. However, that’s simply by chance, “My aim has never been to create music topically, and we’ve never tried to align our releases to coincide with news events,” Nucleya shares.

He describes it as a “cheeky track that pays homage to the sound and style of Bollywood”, and it looks promising in becoming yet another youth favourite. The graphics, which have garnered praise in heaps, have been done by his wife Smriti Choudhary aka Airphish. And the vocals are by Rashmeet Kaur, coincidentally the winner of The Remix—a reality TV competition Nucleya had judged.

“A few years ago, Diplo and I started talking, and we were pretty sold that we wanted to collaborate in some way. We kept going back and forth, then I happened to send the rough idea of this track last year, and it just clicked,” Nucleya says about how Jadi Buti came about. Once the song was decided, thus began the creative process to make it a part of the album. “I sat down with Raftaar who came up with interesting lyrics, which were then sung by Rashmeet because I wanted the vocals to have a very particular flavour that she is so incredible at creating. While this was happening, Major Lazer started pouring in their contribution, and after multiple back-and-forths, the song was finally ready.”

Not just the end product, their year of working together is also something Nucleya appreciates. “There’s no doubt that Major Lazer are some of the most talented artists around. One of the biggest take-aways is their passion for the right project. They’re hell-bent on finding the right sound and aesthetic, and they’re okay with the fact that it takes time to make that happen.”

This collaboration is certainly a high point in his career, one that started in 1995, when he was only 16 and started his first band called Private Soch-alay, which soon became Bandish Projekt. Today, the 40-year-old has a vibrant repertoire to back him, from starting a solo trajectory in 2008 to his first EP in 2013 (Koocha Monster). And many that followed, establishing him as the face of Indian dance music, where he amalgamated EDM with folk beats in his signature style. He is the pioneer of taking concerts to smaller cities and tap into India’s fanbase and has hosted a show on BBC Radio, launched an album at a Ganesh Visarjan, and performed at several renowned music festivals such as Glastonbury (UK), the Electron Festival (Switzerland), Electric Daisy Carnival (Mexico).

Here, Nucleya shares the poignant turns of this incredible journey, and thereby a peek into the workings of this music powerhouse.

Culture
New music this month: 7 Indian artists you need to tune into

You’ve always done what feels right creatively, regardless of any set rules. How has this decision worked out for you?

To be honest with you, this is not so much a conscious decision. I don’t know a different way of being true to myself and my sound, and the reason I’ve been able to do what I’ve done with my music is that I don’t want to be boxed in by ideas of what is ‘right’ or ‘wrong’. But I never actively sat around thinking about the fact that I was choosing not to follow the rules. For me, this is what my sound has naturally emerged into, and my only aim is to continue to keep re-defining what that means to me.

You’ve released music for free in the past. What made you do that?

Experimentation, really. We started at a time when we were still figuring out so much about the music industry. We were still learning what indie meant for us, and we were dabbling in what was a new genre back then. We’ve worked with multiple platforms and different modes of distribution, but we were confident that we didn’t want to make it expensive to listen to our music.

Concerts have been an important way for you to connect with and increase your fanbase. How are you channelling that in the pandemic?

So I’ve never been much of a social media guy, but I do think it’s given me a way to interact with my audience in a new mode and manner. I’ve started going live on my Instagram account to talk to my fans, and have started paying closer attention to my account because it’s one of the only ways to interact. We also did a bunch of fun stuff earlier this year. In the build-up to retroFuture, which was a digital concert we did earlier this year, Ritviz, Anish and I hosted Time Capsule, which was a game show where we had the chance to interact with our fans, and it was a super fun experience! I don’t think that Zoom, IG, and any of these other platforms can replace the feeling of meeting people on the ground and being able to play music live for them, but we’re all trying to get creative to try and bridge that gap.

Does being called the king of independent music in India ever add pressure?

I used to feel the pressure a lot more when I was younger. I’ve had a phase when I felt like I had to release an album every year to stay relevant and to keep my audience engaged. But over the past few years, I feel as though my approach has changed immensely and my family has a lot to do with this. I’ve slowed down just enough to enjoy the process of making the music I do. Also, the independent scene has expanded so much, and there’s so much innovative and exciting music coming out. I’m using that energy to keep me inspired while I go with the flow of where my music wants to take me.

How has independent music evolved in India? And how does the future look?

Honestly, the most beautiful thing for me is that I see different artists finding their own unique sounds even within the genre itself. That trend is only going to continue, and I see that as being supremely beneficial to the growth of the space. We have hoped to attract larger audiences to the style, and with the diversification of the sounds coming out of the country, we’re definitely set to grow. My hope – having worked on Jadi Buti – is that global audiences for Indian dance music are going to increase and we’ve all just got to stay focused on doing what we do!

How can Indian independent music gain the recognition it deserves?

It’s a process, and we’re doing pretty well with developing that stage for the industry. From an artist perspective, it’s about continuing to create and push the boundaries because of the quality of the work. It’s also about an open channel of communication and information between the industry, the artists, and our audiences. We have to know what’s happening in the industry, what kind of music is being created, and understand what the audiences are geared for.

How’s your personal evolution been to date?

To me, it’s really a coming-of-age story. Through my music, I’ve not only discovered my sound, but I’ve also discovered things about myself and my relationships. Over the years, I’ve been able to understand the things that are important to me and work towards them.

What’s next from Nucleya’s studio?

Well, I’m currently working on a few collaborative projects, and we definitely have some tracks lined up that I’m super kicked about. Releasing those will be a priority!

New Releases Indian Artists Independent music Indian Music Top Djs Nucleya Major Lazer
Megha Uppal
Senior Associate Editor
An innate love for travel and food has translated into many a trips since childhood for Megha; it also fed her curiosity to know about local cultures. When not writing, she is on the lookout for three things: A great dark chocolate dessert, a beautiful pool where she can practice her backstroke, and art that she can save up for.
Travel Culture Food Drinks