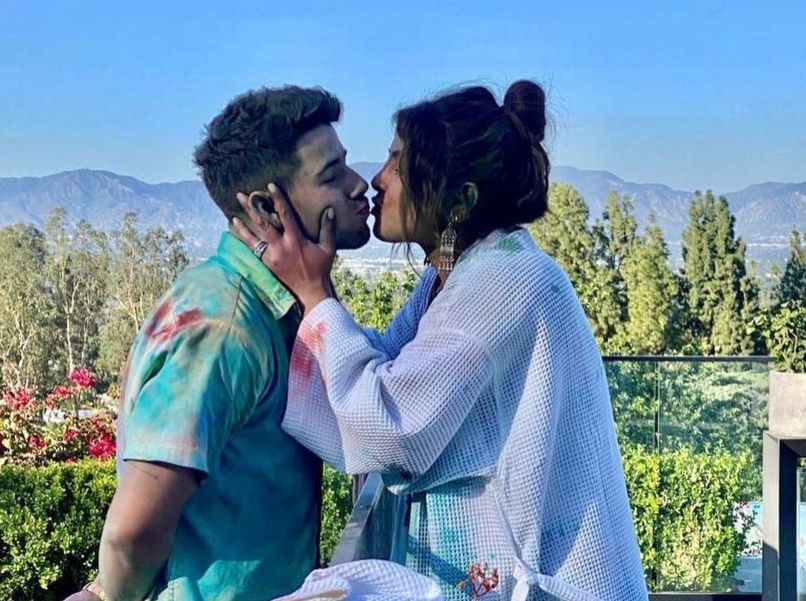 One of the biggest celebrations happened at Priyanka Chopra’s residence in Los Angeles. The actress hosted a Holi 2022 bash with her husband Nick Jonas for their close ones. The party was attended by her friends and family including her in-laws.

She even took to her official social media handle to share a few glimpses of the celebration. In the pictures and videos, the actress can be seen enjoying splashes of gulal along with her hubby. Sharing a series of clicks, Chopra captioned one of her posts saying, “Do me a favor.. let’s play holi. Sorry. Had to! #holihai”

Apart from this, Priyanka Chopra even shared a few more photos and videos where Nick Jonas can be seen kissing her and then hitting her with a balloon. Meanwhile, in another video, the actress was jumping with her husband’s cousins. She captioned the post saying, “To be able to find some joy at a time when the world feels so scary is such a blessing. Happy Holi everyone. Thank you to our friends and family for playing Holi like desi’s do! Feeling blessed. #photodump #happyholi #goodoverevil #festivalofcolours”

This is not the first time the Jonas couple has organised a Holi bash, since the duo got married, they’ve been hosting Holi parties every year. At first, they celebrated the festival in Mumbai and then last year it happened in London.

Talking about the two’s personal life, the couple recently became parents and welcomed a baby daughter via surrogacy. We’re still waiting to hear the news about the newborn’s name.

Holi Festival Priyanka Chopra Priyanka Chopra Jonas Nick Jonas
Sanyukta Baijal
Apart from scrunched up paper with recycled aspirations, Sanyukta is also a writer. When not reading or scribbling, she loves playing copious amounts of video games and watch tons of films.
Sign up for our newsletters to have the latest stories delivered straight to your inbox every week.