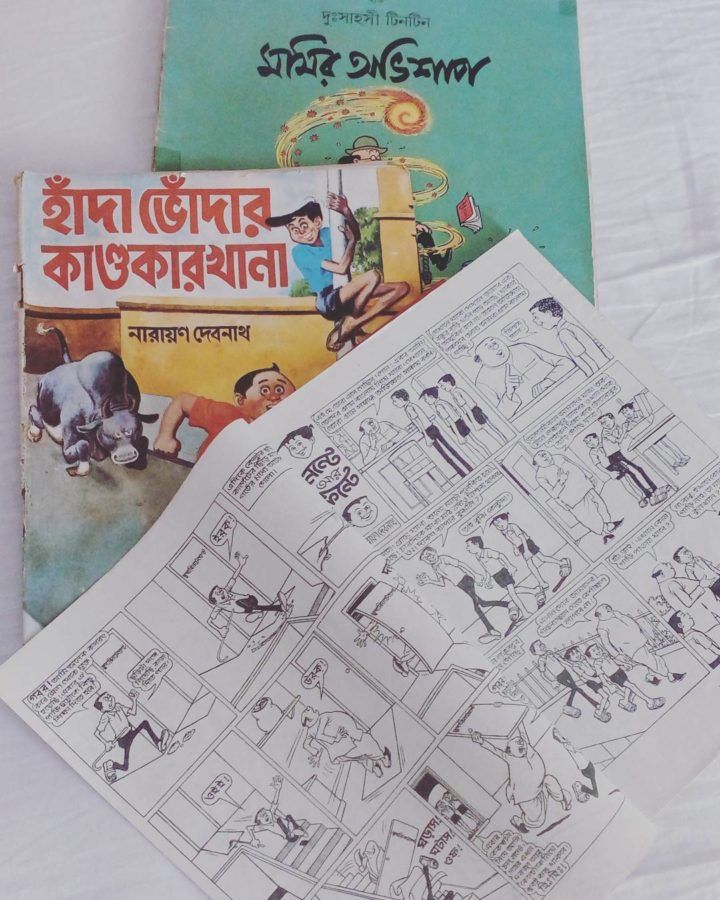 Narayan Debnath, the man who gave Bengali kids a childhood worth remembering with his comics, passed away this morning in Kolkata at the age of 96.

The legacy he has left behind is unmatched. A Padma Shri, Sahitya Akademi Award and Banga Bibhushan awardee, Narayan Debnath is a cartoonist that gave generations of Bengali kids and young adults their weekly dose of fun comics to wake up to on weekend mornings and school holidays. Here’s looking back at some of his legendary work that will stay with us forever!

Originally serialised for the children’s monthly magazine Kishore Bharati, Nonte Phonte is the story of two mischievous boys in boarding school, their arch-rival Keltu and their hostel superintendent. That’s their entire world, and for most of us, so was ours, while growing up. This fun comic strip wouldn’t have been half of what it is without Narayan Debnath’s illustrations.

This is the story of a heroic, muscular man with a 40-inch chest and stick-thin legs, who’s dressed in a pink vest and black shorts. He has superhuman strength and uses that to help others and save others in distress, but often lands himself in comical situations. Debnath had thought of the idea of the superhero Bantul one day while returning from College Street in then-Calcutta. Bantul The Great originated during the Bangladesh War of Liberation, also known as the Indo-Pakistani War of 1971.

Started in 1962 for the monthly Bengali children’s magazine Shuktara, Handa and Bhonda are two young boys. Handa is a thin and mischievous lad trying to get his plump friend Bhonda in trouble and always failing. Narayan Debnath holds the world record for creating the longest-running comic strip as a solo writer-artist with Handa Bhonda.

In May 1961, in the hugely popular children’s magazine Anandamela, Rabi Chobi, which was a Narayan Debnath creation, was published to mark the birth centenary of Nobel laureate Rabindranath Tagore.

His other notable works include Potolchand the Magician, Bahadur Beral, Danpite Khadu aar tar Chemical Dadu and Petuk Master Batuklal. While these did not get as much acclaim as the rest, these were funny in their own ways, and if you ask a true blue Bengali, you may even find these comics at their home library.

comics cartoonist Bengali
Sreetama Basu
A self-proclaimed plant mom, Sreetama finds joy wherever she sees greenery. The list of other things that bring her joy is pretty long, but writing about them is her way of celebrating them. In love with little, inconsequential things, like neatly tucked-in bedsheets and big, significant things, like whole cheesecakes. She dreams of being a baker and writing about food someday.
Food Dining Entertainment
Sign up for our newsletters to have the latest stories delivered straight to your inbox every week.