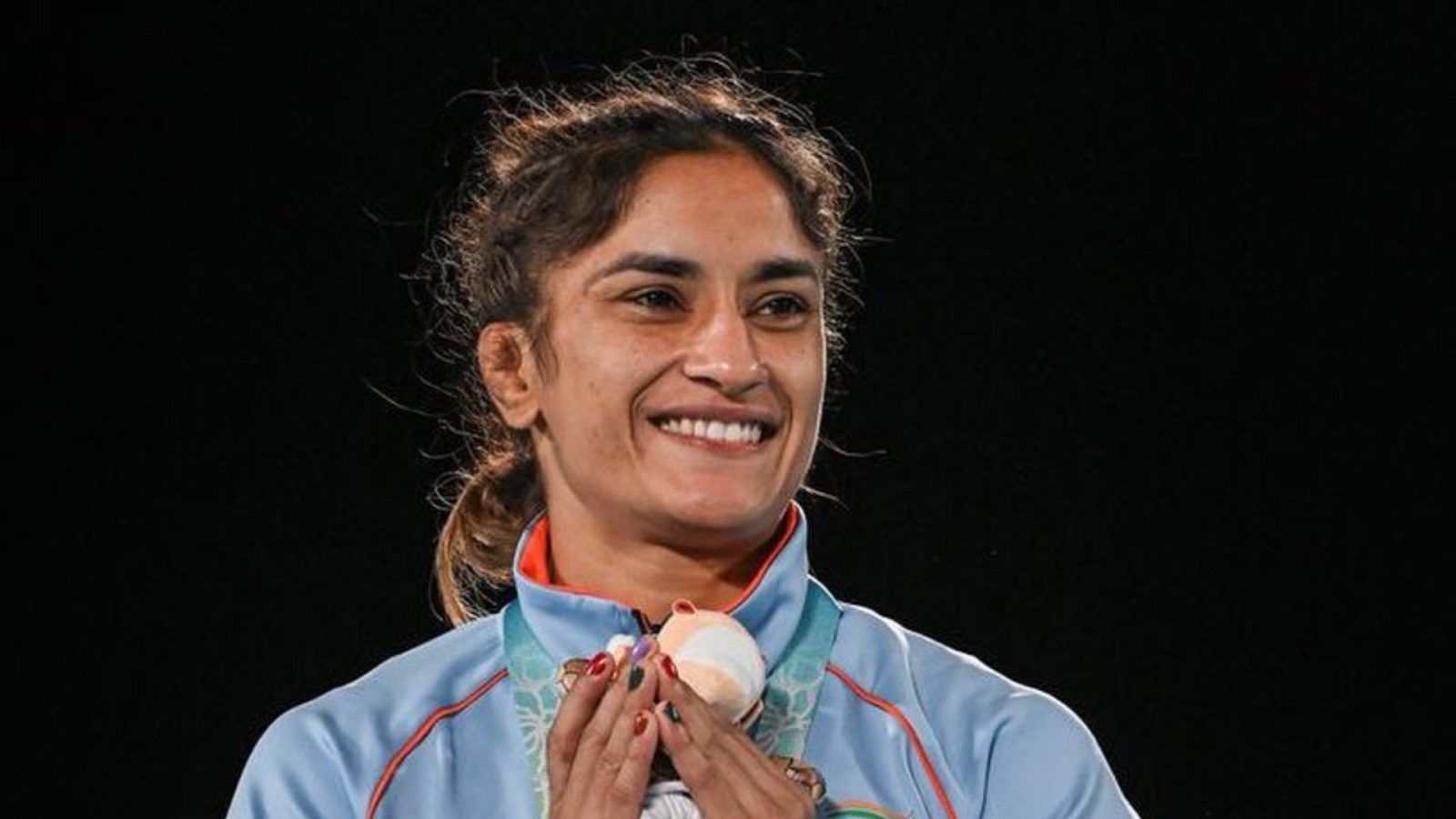 Culture
Commonwealth Games 2022: All the gold medal wins for India
Share this article
Next article

Indian athletes at CWG 2022 are steadily proving their mettle, winning medals and qualifying for further rounds for upcoming events. If you’ve been following the Games this year, you’ll know that in the last few days, India has managed to bag twenty-two gold medals. We are keeping a tally of all the gold medal winners from India at the Commonwealth Games 2022.

With this win, Sharath Kamal has bagged an overall 7🥇 medals at the CWG in different categories🤩 pic.twitter.com/OC3vBo47iS

Satwik and Chirag won India a gold medal at the Commonwealth Games by defeating their opponents, England’s Ben Lane and Sean Mendy – with a score of 0-2.

– ! Congratulations to Lakshya Sen on bagging in his first Commonwealth Games.

Lakshya Sen bagged a gold in the Men’s Singles badminton finals. He defeated Malaysia’s Ng Tze Yong 19-21 21-9 21-16 in the match, and it is the third time he has defeated Yong in a total of three matches he has played against him.

! PV Sindhu wins her first CWG Singles by defeating Li Michelle of in the final.

Bow down to the Badminton royalty!

PV Sindhu won gold at the Commonwealth Games, winning against Canada’s Michelle Li. She scored 21-15, 21-13 in the final to bag the gold medal.

Our Gold medalists on the victory podium | Sharath Kamal & Sreeja Akula
PS: That innocent smile on Sreeja’s face is a joy to watch. She absolutely deserves all the laurels after the kind of effort she has put in last week across all events. #CWG22 #CWGwithIAS pic.twitter.com/CjRsWDmPaa

Our World Champion @nikhat_zareen wins Gold medal in 48-50 Kg flyweight at #CommonwealthGames2022.
3rd Gold for India in Boxing and 17th over all Gold and with the 48th Medal India crossed New Zealand at 4th position in overall medal tally. pic.twitter.com/kd7Ybhy15P

‘Everyone pats themselves if we win medals, but athletes on the fringes won’t get support to climb the ladder’. A late bloomer, Paul Eldhose was rejected for a sports scholarship for ‘lacking potential’. Today the 25-year-old triple jumper wins a historic CWGwith a 17.03m PB pic.twitter.com/4Ne5vWHoLZ

Winning India’s first-ever gold in Men’s Triple Jump at the Commonwealth Games was Eldhose Paul. Recording a massive 17.03m, he managed the score in his fifth attempt.

A prestigious addition to our medals tally thanks to the bright Amit Panghal. He is one of our most admired and skilled Boxers, who has shown topmost dexterity. I congratulate him for winning a Gold medal and wish him the very best for the future. #Cheer4India pic.twitter.com/RI2qfveMVn

Nitu Ghanghas opened India’s account for gold medals in boxing as she defeated England’s Demie-Jade in the women’s 48kg final.

Naveen thank you so much

Ur just 19 year old and won Gold with such superior skillset.

So proud of you bhai

You have a bright future ahead !!

Naveen Naveen chants in the arena made our day today !!#Naveen #Wrestling pic.twitter.com/KYvcvcisS1

Naveen Sihag won 9-0 against Pakistan’s Muhammad Sharif Tahir in the men’s 74kg final, bagging yet another gold medal for India at the Birmingham Commonwealth Games.

Vinesh won the Women’s Freestyle 53 kg in wrestling. Among the gold medal winners from India at the Commonwealth Games this year, she won 4-0 to Chamodya Keshani Maduravalage Don of Sri Lanka. She took just two minutes and 24 seconds to win the gold.

Ravi won gold for India by defeating Ebikewenimo Welson of Nigeria. He scored 10-0 in the final to win his first gold at the games, in a match that lasted just two minutes and 16 seconds.

In the third gold medal win within hours, Deepak Punia managed to cinch the medal for India on August 5, 2022. The wrestler defeated Muhammad Imam of Pakistan to claim his first ever CWG gold at his first Commonwealth Games, bringing India’s total gold medal tally up to nine.

! Congratulations to Sakshi Malik on winning her first gold medal at the Commonwealth Games.

An excellent come back from her to win the bout!

Sakshi Malik brought laurels to India by winning the eighth gold medal for the country. For her first gold at the CWG, she beat Canada’s Ana Gonzalez to bag the medal in the Women’s freestyle 62 kg category. This is Sakshi’s third medal at the Commonwealth games, and she has carved her name as among this year’s commonwealth games gold medal winners from India.

Bajrang Punia managed to cinch a gold – his second consecutive at the Commonwealth Games – on Friday, August 5. The wrestler defeated Canada’s Lachlan McNeil to achieve the feat.

Asian Para-Games Bronze medalist, #Sudhir wins ‘s 1st ever GOLD medal in Para-Powerlifting at #CommonwealthGames with a Games Record to his name

Sudhir wins his maiden in Men’s Heavyweight with 134.5 points (GR) at CWG#Cheer4India
1/1 pic.twitter.com/cBasuHichz

Sudhir became the sixth gold-medallist from India on August 4, as he bagged the prestigious medal for the Para Powerlifting Men’s Heavyweight. The medal is a historic win, as this is the first time India has won a gold in the same. Sudhir lifted a whopping 212 kg, recording a massive 134.5 points, which helped him bag the gold.

Bringing India’s tally of gold medals up to five was the men’s Table Tennis team, which won the first gold ever in the sport (at the CWG). The team, comprising G Sathiyan and Harmeet Desai, won their singles as well as the double matches against Singapore, defeating them 3-1 in the final.

Team defeat 17-10 in the Women’s Fours to clinch their first ever in Lawn Bowls at @birminghamcg22 .

This is India’s 4th Gold medal in the games.

In what is a history-making win for India, Nayanmoni Saikia, Pinki Singh, Lovely Choubey and Rupa Rani Tirkey won India a gold medal at the Lawn Bowls Women’s Fours event. The ladies beat South Africa 17-10, grabbing a significant margin and securing yet another medal for India on August 2, 2022.

The superstar from Imphal has made India proud on several occasions, including a silver medal win at the 2020 Tokyo Olympics, and several other accolades that she has won over the years. The weightlifting champion managed to grab the coveted gold, India’s first for the Commonwealth Games this year, carving her name as among the winners. The gold medallist set a new record as she lifted a total of 201 kg –  88 kg in snatch, and 113 kg in clean and jerk. The second place record for the event is at 172 kg, way behind Chanu’s record.

Among the Commonwealth Games India gold medal winners is Jeremy Lalrinnunga, who made the country proud by bagging the prestigious medal on July 31. The weightlifter set the record of lifting a massive 300 kg total, setting a new Commonwealth Games record. The 19-year-old ended up hurting his back after the first clean and jerk attempt, but he collected himself and pushed hard. Lifting an impressive 160kg on his shoulder, which followed his massive lead in the snatch round, he managed to achieve this feat.

Achint Sheuli from West Bengal grabbed his much-awaited gold in the 73 kg men’s weightlifting category late on July 31. The debutant lifted a massive 313 kg to grab this gold medal at the Commonwealth Games this year. He heaved 143 kg in snatch, and a massive 170 kg in clean and jerk, on his third attempt, to etch his name among the Commonwealth Games India old medal winners from this year.

Commonwealth Commonwealth Games Commonwealth Games 2022 CWG 2022
Anushka Goel
Anushka likes to spend her time reading, scrolling through Instagram for some travel inspiration or looking after her plants. She loves reading about the latest skincare and makeup but tries to make mindful choices and live sustainably.
Sign up for our newsletters to have the latest stories delivered straight to your inbox every week.

Friendship Day 2022: Ultimate gifting guide for the priceless friends in your life