Home > Culture > Events > Know the champs: Here’s a look at the glorious journey of the Thomas Cup winners 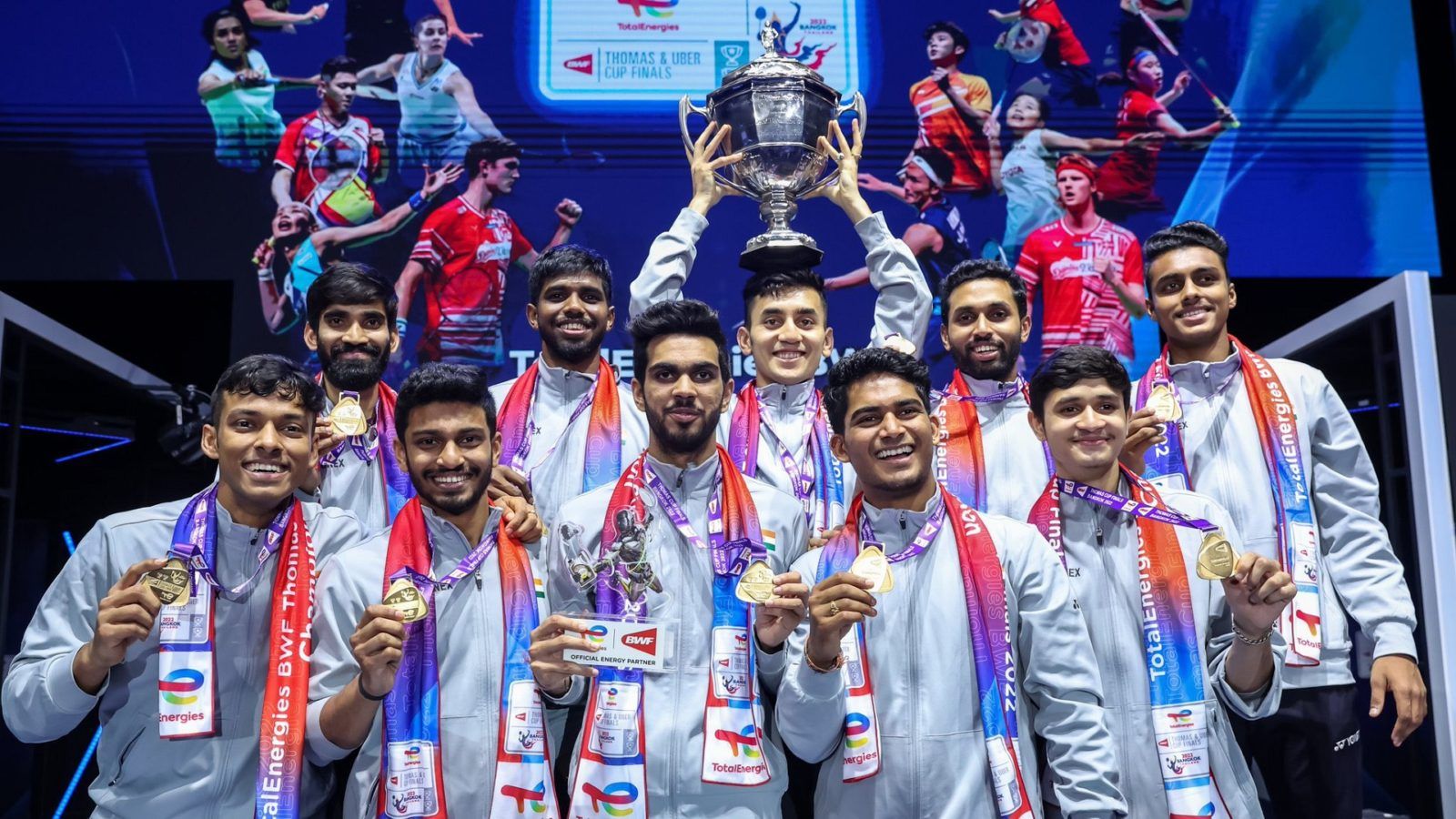 Culture
Know the champs: Here’s a look at the glorious journey of the Thomas Cup winners
Share this article
Next article

Indians were up for a lovely surprise this weekend. It was a moment of national glory when the national badminton men’s squad lifted the prestigious Thomas Cup for the first time in the event’s 73-year-long history. They achieved the feat by defeating 14-time champions Indonesia. The Indian badminton team’s determination over the seven-day-long tournament, held in Bangkok, reaped rich rewards for what most fans thought was an underdog team.

The official blog of the Olympics called Sen the new poster boy of Indian badminton in a post earlier this year. The 20-year-old shuttler has a plethora of trophies and medals to his credit. His first big victory came in 2014 when he made the nation proud by winning the Swiss Junior International. Sen also bagged gold at the Asian Junior Championship 2018.

In the February of 2017, Sen became the Junior World Number 1. At the World Junior Championships 2018, Sen won a bronze medal. The young badminton player has also won a silver medal at Youth Olympics 2018.

2019 was a great year for the badminton player as he won 5 tournaments. These included SaarLorLux Open, Dutch Open, Bangladesh International, Scottish Open, and Belgian International. Sen also clinched the bronze medal at BWF World Championships 2021. Some of Sen’s latest achievements before the Thomas Cup include runner-up positions at the All England Open and German Open. He stood first at the Indian Open 2022.

The brilliant duo of Satwiksairaj Rankireddy and Chirag Shetty won the First Doubles against Mohammad Ahsan and Kevin Sanjaya Sukamuljo.

Satwiksairaj Rankireddy and Chirag Shetty became the first men’s doubles pair from India to make it to the top 10 ranks of the BWF World Ranking by achieving the 7th rank.

Hailing from Andhra Pradesh’s Amalapuram, Rankireddy was inspired by his father, a former state-level badminton champion, to play badminton. He joined the Pullela Gopichand Academy in 2014 and worked towards becoming a doubles specialist. Shetty has been his partner for a long time now. The two have brought laurels for the nation on several occasions.

Rankireddy and Shetty won a gold medal for India at the mixed team event in the 2018 Commonwealth Games. In the same tournament, they also won the silver medal in the men’s doubles event. Their victorious journey continued in 2019, when the young lads became India’s first badminton doubles pair to taste success at the BWF Superseries title, after winning the Thailand Open. They also bagged the runner-up position at the 2019 French Open.

In the 2020 Summer Olympics, Rankireddy and Shetty became the only pair to defeat Lee Yang and Wang Chi-Lin from Taiwan. They qualified for the BWF World Tour Finals in December, 2o21.

They were the winners at the 2018 Hyderabad, and runner-ups at the Syed Modi International tournament in 2018. They also won the Thailand Open in 2019. The same year, they finished second at the French Open. Before the historic Thomas Cup win, Rankireddy and Shetty bagged the first position at the Indian Open in 2022.

Kidambi Srikanth won the Second Singles against Jonatan Christie. The badminton champion needs no introduction. He is one of the best badminton players that India has ever witnessed. Married to badminton champion Saina Nehwal, the former world number 1 has had a glorious career with many ups and downs.

He debuted at the Olympics in 2016 and won four titles in 2017 to achieve the number 1 position in the world. Unfortunately, Srikanth lost his top form owing to several serious injuries and COVID. He made an impressive comeback at the Sudirman Cup in September 2021. He played in five other tournaments after that, including the semi-finals at the Hylo Open in Germany.

In 2017, Srikanth penned history with Sai Praneeth, when the two became India’s first-ever badminton pair to make it to the finals of a ranking event in badminton. Srikanth missed the Tokyo Olympics 2022 but the historic victory at the Thomas Cup will definitely be a new start for the champion.

MR Arjun and Dhruv Kapila won the Second Doubles against Fajar Alfian and Muhammad Rian Ardianto. Kapila shot to fame when he won the gold medals in the men’s doubles, mixed doubles, and team events at the 2019 South Asian Games. Arjun and Kapila’s impressive victory over Supak Jomkoh and Kittinupong Kedren was the only highlight for India in an otherwise disappointing outing at the 2021 Sudirman Cup. Arjun Madathil Ramachandran was part of the Indian men’s team that clinched the bronze at the 2020 Asia Team Championship.

H S Prannoy won the Third Singles against Shesar Hiren Rhustavito. His full name is Prannoy Haseena Sunil Kumar. He hails from Kerala’s Thiruvananthapuram and has been representing India in both the singles and doubles categories. His father Sunil Kumar is also a former badminton player and an All India Air Force Badminton Champion.

Prannoy entered the international arena in 2010 after proving his talent at several Junior and Senior National tournaments. His first international podium finish came in 2010 when he bagged a silver at the 2010 Youth Olympics in Singapore. His first big win came in 2011 when he won the silver at Bahrain International.

2017 was special for Prannoy as he became India’s first badminton player to win the US Open Badminton Championships title. His winning streak continued in 2018 when he bagged the gold at the 2018 Commonwealth Games. He was the runner-up at the 2022 Swiss Open.