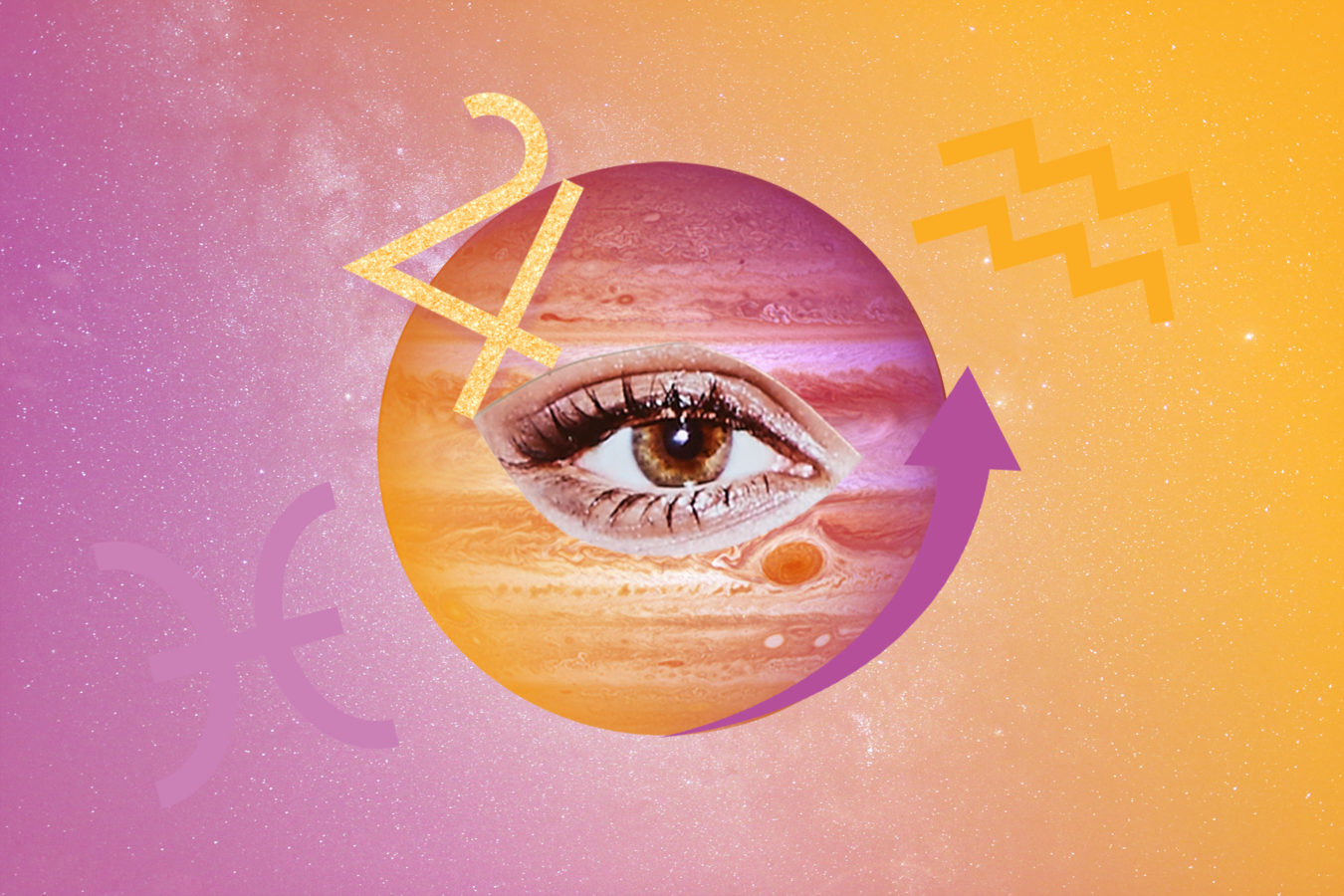 The planet of fortune moves backwards through Pisces and Aquarius until October 17-18, urging reflection around personal development and spiritual growth.

Everyone’s rejoicing that Mercury has ended its retrograde and is direct as of June 22, but one planet’s backward turn is only just beginning. Jupiter, the planet of luck, fortune, and expansion, kicked off its retrograde on June 20, turning its powers inward until October 17-18 (depending on your time zone).

Although it kicks off its transit in empathic mutable water sign Pisces, it will move back into humanitarian fixed air sign Aquarius on July 28, offering up two distinct flavours and themes over the course of its annual retrograde.

Here’s what you need to know about Jupiter retrograde 2021.

What It Means When Jupiter Is Retrograde

The largest planet in our solar system, which oversees luck, abundance, fortune, religion, and philosophy, is a transpersonal (aka outer) planet that spends approximately a year in a sign. It goes retrograde – in other words, appears to move backwards from our vantage point on earth – for about four months every year. (That’s right, it’s not actually moving backwards. Ditto with when Mercury is retrograde.)

When moving direct (when it’s not retrograde), Jupiter tends to exaggerate or amplify external matters. For instance, if it’s hanging out in your fifth house of romance and self-expression, you’ll likely experience a major uptick in creativity and a lot of happy, fortunate activity in your dating and love life. If you’re single, you’ll have your pick of app matches, and if you’re attached, you could be having a blast with your SO and, because the fifth house rules children, maybe even be on the brink of parenthood if that’s in the cards for you.

But when Jupiter is in retrograde, which occurs roughly once a year for about four months at a time, it turns your attention inward and toward expanding development. Much like Mercury retrograde, it’s a reassessment phase during which you’re tasked with gaining more insight and clarity around a particular area of personal growth. Jupiter retrograde asks you to consider if you’re truly comfortable with the ways in which you’ve expanded and taken on more in this specific area of life and whether you’re ready for the rewards the fortunate planet is intent on bringing.

Again going with that example of the fifth house, you could find yourself reflecting on how more romance and/or self-expression has helped – or could help – you become even more fulfilled and fortunate. Maybe you’ll be debating which artistic projects you want to take on more (or less) of, which people you want to continue dating or not, or how much fun and spontaneity is factoring into your everyday life. Given Jupiter’s terrain, you’ll mull personal philosophies, development, and growth and be nudged to tune into new ways of strengthening any educational and spiritual pursuits.

What to Know About 2021’s Jupiter Retrograde

In order to wrap your head around where Jupiter is heading over the course of its retrograde, it’s important to talk about where it’s been. On December 19, 2020, after about a year in industrious, power-driven cardinal earth sign Capricorn, the planet of luck shifted into Aquarius, the fixed air sign symbolised by the Water Bearer that exudes a rational, humanitarian vibe, as well as one that’s contrarian and platonic relationship-loving. Through the end of the year and the beginning of 2021, it continued to move through Aquarius, and on May 13, 2021, it shifted into Pisces, the mutable water sign symbolised by the Fish and known for its empathic, psychic, artistic, and escapist ways.

The ginormous planet only managed to get to 2 degrees of Pisces before its retrograde hit, so on June 20, it began its trip backwards, and on July 28, it will re-enter Aquarius where it remains for the rest of its retrograde until October 17-18 and beyond. Jupiter doesn’t make its way back to Pisces until December 28. But it’ll remain there until May 10, 2022, and then later in the year, enjoy a brief reunion with the sign of the Fish.

This astrological zig-zag through the last two signs of the zodiac could bolster your internal focus on both Piscean and Aquarian themes.

From June 20 to July 28, while Jupiter is retrograde in emotional Pisces, expect more reflection on your deep-rooted emotional needs, how you show empathy and compassion, how you’ve been caring for your mental health. And from July 28 to October 17-18, its path back through Aquarius could spur more meditation around how you want to work as part of a team or a collective to achieve spiritually satisfying progress, where you’re okay with digging your heels in to enact change, and how collaboration with others and future-minded thinking can boost your fortune.

Just like every retrograde, Jupiter’s backward spin is a wonderful opportunity to not only reflect but also reconsider and revise particularly when it comes to issues of growth and expansion. While it is in Pisces, you could notice you’ve been giving too much of yourself emotionally in a particular situation or that you’ve been leaning too hard on escapism to deal with everyday stressors. And during its retrograde in Aquarius, you might be more acutely aware of the fact that you’ve bitten off more than you can chew with a group effort or you’re thinking in an amplified, black-and-white (fixed!) way related to your ideals.

Because it’s a transpersonal planet, Jupiter’s effects can be felt on the social and political stage as well. This will be especially apparent while it’s back in Aquarius, known to be deeply humanitarian and focused on what’s best for the collective over the individual. So, big-picture ideas sprung from that mentality – like Medicare for All or remote vs. in-person school or work situations – could be back in the headlines in a major way.

The Signs Most Affected by the 2021 Jupiter Retrograde

Although every sign could feel the taskmaster planet’s backward turn, those born while the sun was in either Pisces – annually from approximately February 19 to March 20 – or Aquarius – annually from approximately January 20 to February 18 – or with your personal planets (Sun, Moon, Mercury, Venus, or Mars) in either sign (something you can learn from your natal chart), you’ll feel this retrograde more than most.

If you want to get even more specific, check to see if you have a personal planet that falls within five degrees of where Jupiter stations retrograde and direct (2 degrees Pisces and 22 degrees Aquarius). If so, you’ll be extra compelled to pour more energy, time, and effort into boosting the qualities and abilities that make you unique and bring you luck.

The Thrilling Takeaway On Jupiter Retrograde

When you hear “retrograde,” you probably think doom and gloom, but it’s helpful to reframe that work as an opportunity to reflect and revise. And when it comes to anything related to benevolent Jupiter, the positive is sure to outweigh the negative, as the planet’s focus – even in compromised positions or challenging transits – is on luck, optimism, fortune, and expansion.

Additionally, Jupiter’s association with the big picture means there’s no need to get too hung up on all the little details of its retrograde. It simply sets the stage for better understanding where and how you’ve given more of yourself than necessary and where you could stand to offer more in order to achieve self-actualisation. As it travels back through Pisces, it’ll bolster awareness around what you’ve been putting your heart into, and in Aquarius, what you’ve been channelling mental energy toward. By the time it goes direct this fall, you could be crystal clear on what you want and what you need – and ready to make even your wildest dreams come true.

Maressa Brown is a writer and astrologer with more than 15 years of experience. In addition to being Shape‘s resident astrologer, she contributes to InStyle, Parents, Astrology.com, and more. Follow her Instagram and Twitter at @MaressaSylvie.