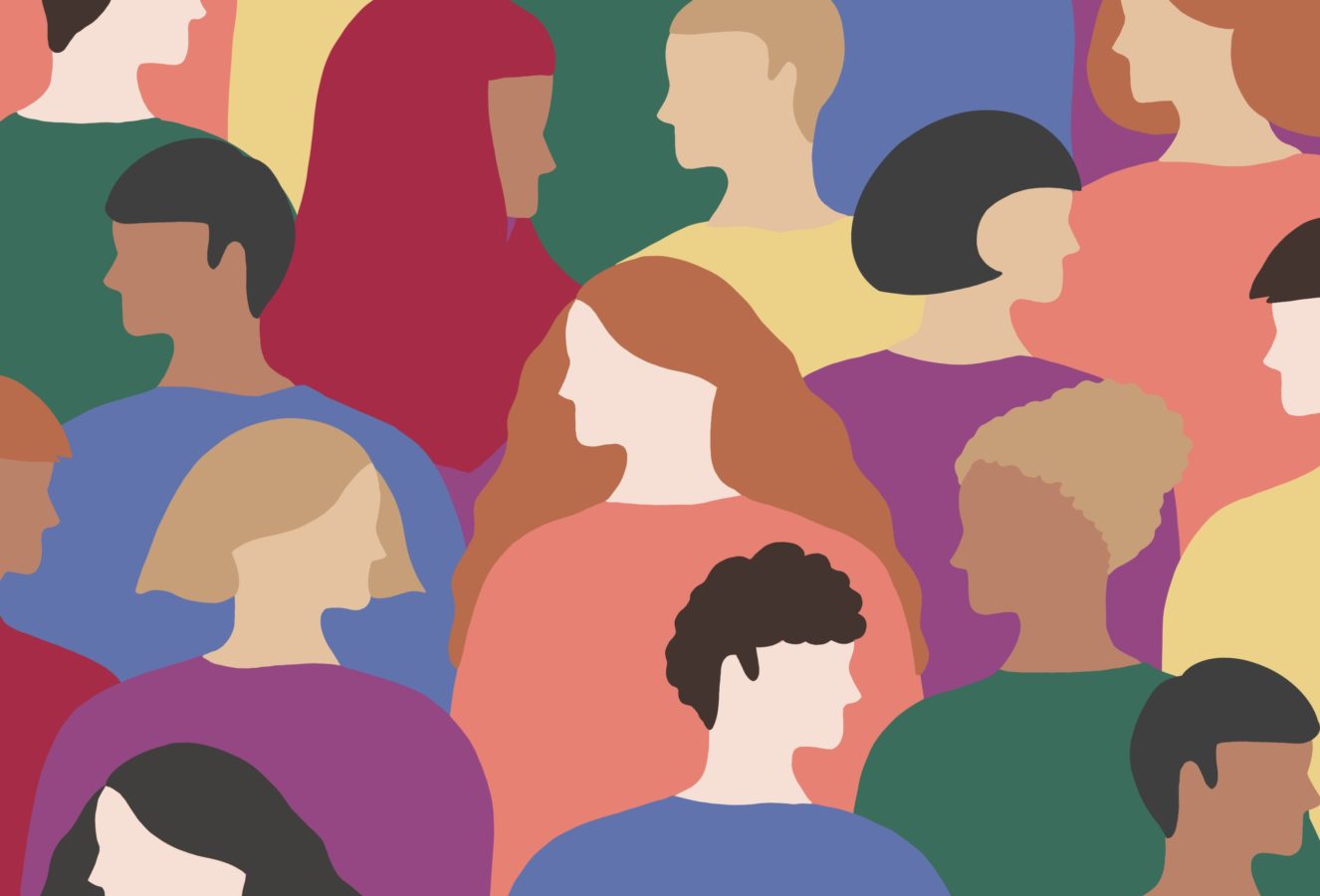 From the 1969 Stonewall riots, which gave the impetus to Pride Month, most of the world has come a far way. The LGBTQ community today makes a convincing case for equal rights. India, too, is seeing a growing awareness about alternate sexuality and gender. However, changing the minds of millions of people is a daunting task. Thankfully, some LGBTQIA organisations in India are taking up the ambitious mission of making people understand what the community stands for.

Here are ten such LGBTQIA organisations in India – 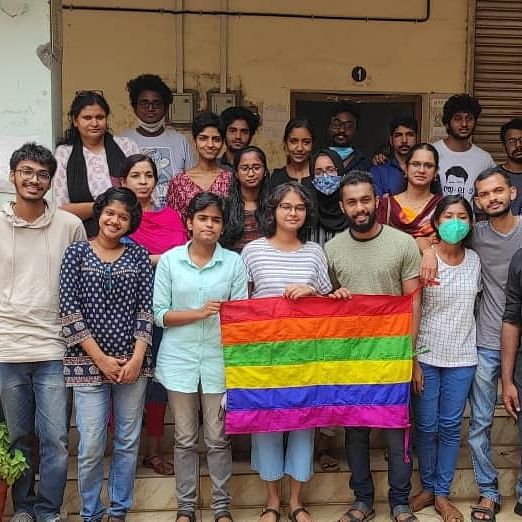 Queerythm is a community-based organisation for LGBTQI (Lesbian, Gay, Bisexual, Transgender, Queer, Intersex) people. Based out of Kerala, it started as a support group for the community. Queerythm holds monthly meetings on first Saturdays and aims to create a society free of discrimination against gender and sexual minorities. 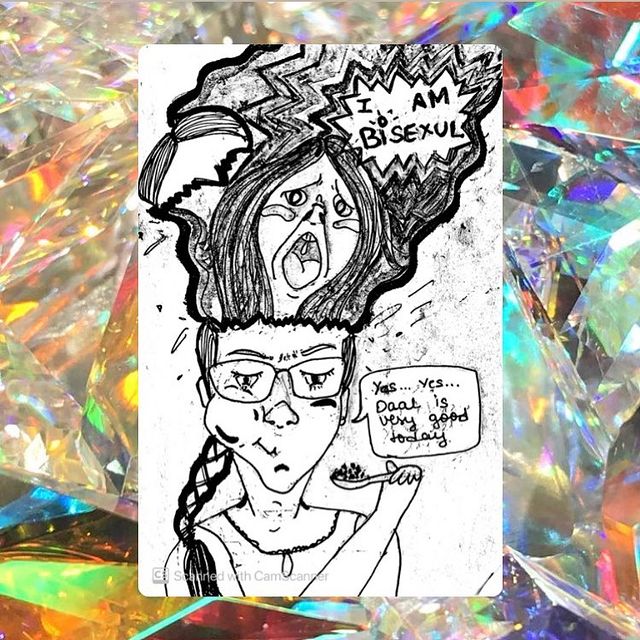 Bi Collective is an independent voluntary community meant for bisexual, bi+, bi-curious, and pansexual people in and around Delhi. It functions as a resource and support group for the community. The organisation aims to answer questions around sexuality and to encourage open discussions. Some of the initiatives that the Bi Collective has taken in addition to regular support group meet-ups are the ‘Bi Collective Library’ and ‘Sexuality and multiplicity: A comic-making workshop’. The Bi Collective Library has a collection of over a hundred books from academia, fiction, and non-fiction. It also boasts of research reports centring around bi-sexuality. Recently Bi Collective started a podcast named ‘Passing Bi’ on Spotify.

Started in 1994, Goodasyou is one of the oldest queer support groups in Bengaluru. The aim of the group is to formulate discussions about the LGBTQIA+ community in both personal and public space. The group functions on voluntary donations. It also looks at creating more avenues for the community members to socialise via sports, trekking, and cooking. The organisation also has a Facebook group to encourage discussions amongst community members, their families, friends, and allies. In addition, it also provides support for emergency situations. Additionally, their website also provides counselling, guidelines for dating strangers, and resources for HIV testing and treatment. 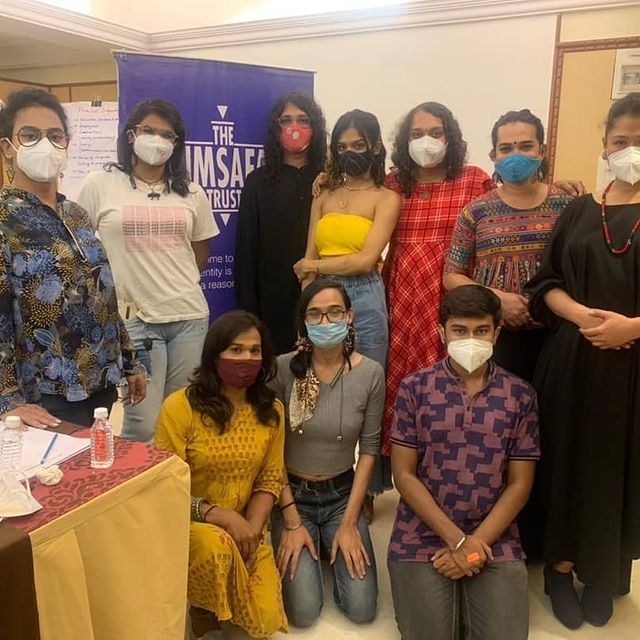 The website of Humsafar says it is a place “where your identity is not a reason to a hide, but a reason for pride.” Established in April 1994 by renowned journalist Ashok Row Kavi, the organisation aimed to reach out to the queer community in and around the Mumbai metropolitan area. The trust started its activities by inviting gay men and lesbian women to its centres. Soon, the centre began conducting workshops on the health and human rights of the LGBTQ community. Humsafar Trust, in collaboration with National Aids Control Organisation (NACO) and Mumbai District Aids Control Society (MDACS), has provided health services to hundreds and thousands of queer community members. It has also partnered with public health delivery systems in Mumbai for providing medical and counselling assistance. In addition, HT initiates advocacy workshops. 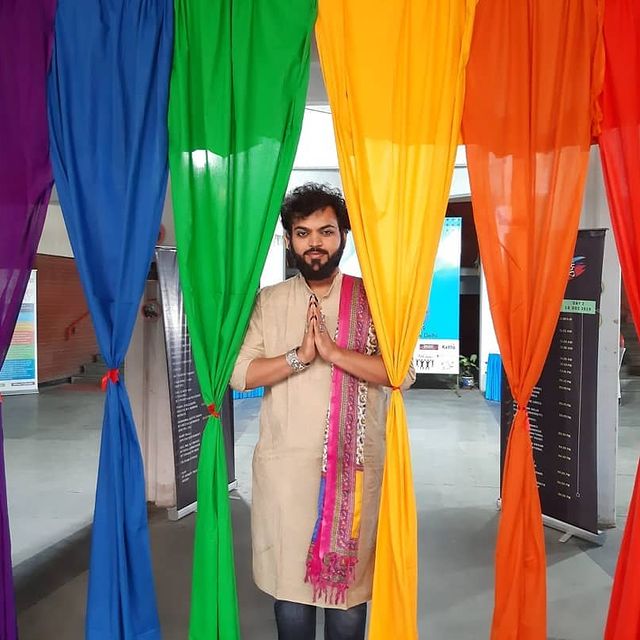 Started by Vinay Kumar in 2012, Harmless Hugs focuses on community building. The organisation has led a variety of interesting events like the Queer Holi Event and the Delhi International Queer Theatre and Film Festival (DIQTFF). Harmless Hugs also provides resources in case of any legal or medical emergencies. Vinay Kumar, in an interview with The Indian Express, said that ”Harmless Hugs came into being as a safe space for queer people to meet and interact”. Harmless Hugs wants to make space for all kinds of people, from activists to intellectuals. 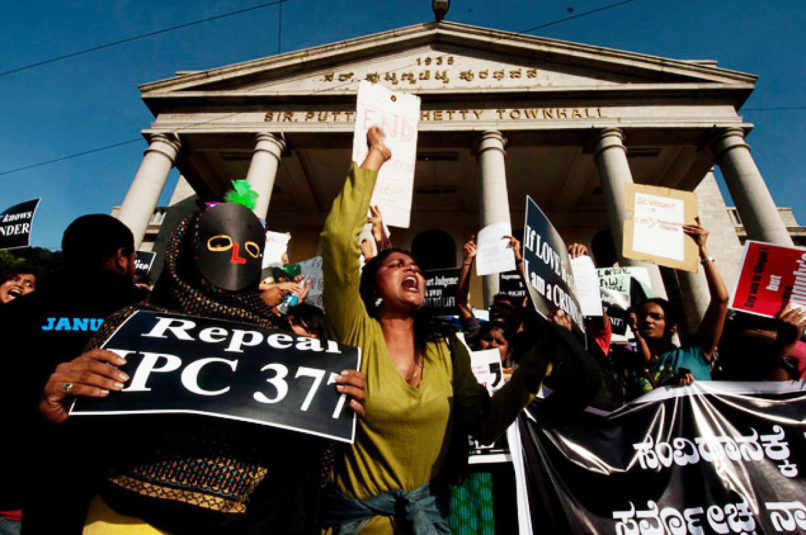 Founded in 1999 in Bengaluru, Sangama is one of the first LGBTQIA Organisations in India that emphasizes the concerns of sexual minorities, especially the under-privileged and non-English speaking backgrounds and sexual minority sex workers. It works to bring discussions around sexuality, sexual preferences, and gender identity. It challenges the existing laws, which it believes discriminate against sexual minorities and people living with HIV/AIDS. It also works with family members, friends, and co-workers of the community. The organisation believes in an ‘integrationist approach’, which is to bring the non-homophobic heterosexuals into the movement for sexual rights. 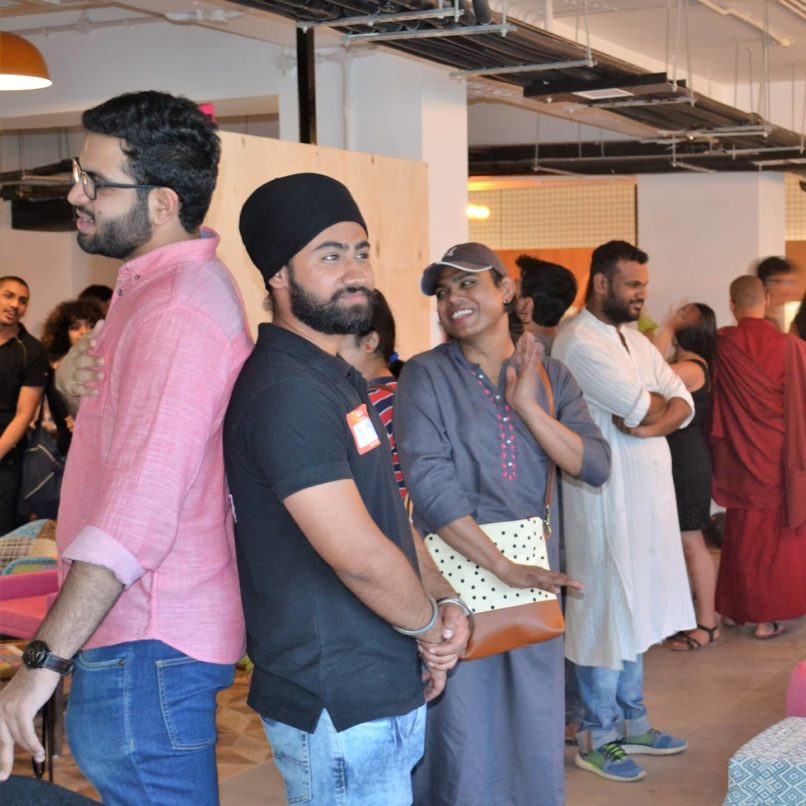 India’s first support group for asexual people, Indian Aces was founded in 2014 by Dr Pragati Singh. Indian Aces has won multiple awards and grants. It has an active presence both online and offline in India and around. The organisation was started to inform people about asexuality, but it has expanded itself into a space that represents the LGBTQIA+ community at large. It encourages discussions on topics like gender, sexuality, and diversity. 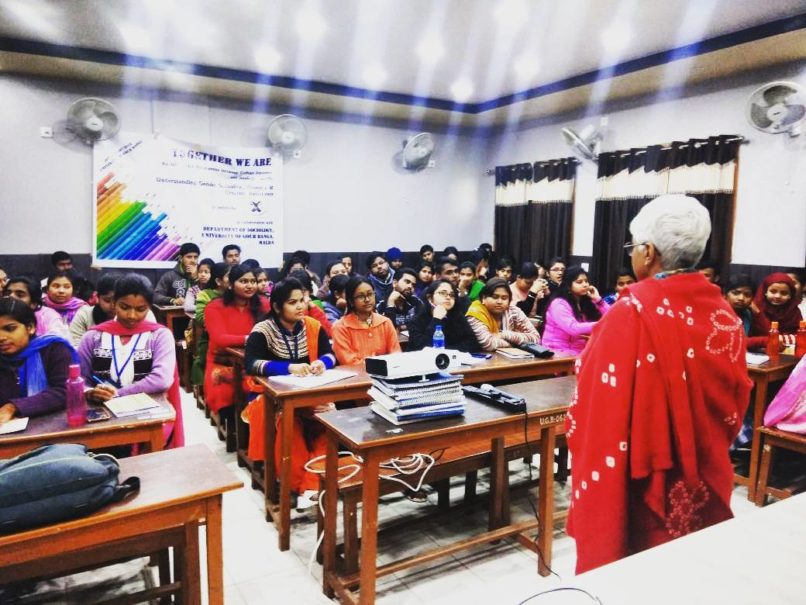 Named after the famous lyrical Greek poet of the 6th Century, Sappho is an emotional support group for bisexual women, lesbians, and male to female transpersons. Sappho was established in 1999 and is the first-of-its-kind group in Eastern India. It is based out of Kolkata but has members across the globe. The initial goal of Sappho was to provide safe space and emotional support for sexually marginalised women and female to male transpersons but eventually entered into the rights/justice-based framework to fight homophobia, discrimination, and violence. Sappho started with the goal to provide safe space and emotional support to sexual minority women. It later made its way into the arena of rights and justice to fight homophobia and violence against sexually marginalised women. Sappho for Equality, an initiative of Sappho, was established in October 2003 to initiate various activities and provide resources for the community. 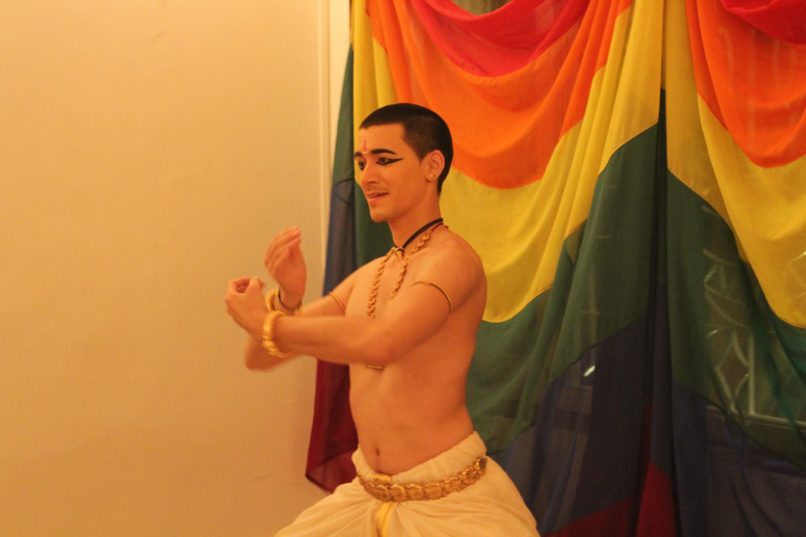 Queer Arts Movement India was founded by author and human-rights activist Romal Laisram in 2013. It is one of the LGBTQIA organisations in India that hopes to represent the voices of the community through performing arts and thus, make the community visible in the mainstream. Based in Bengaluru, (QAM)I is a non-profit organisation where all collected funds are used for other social causes. 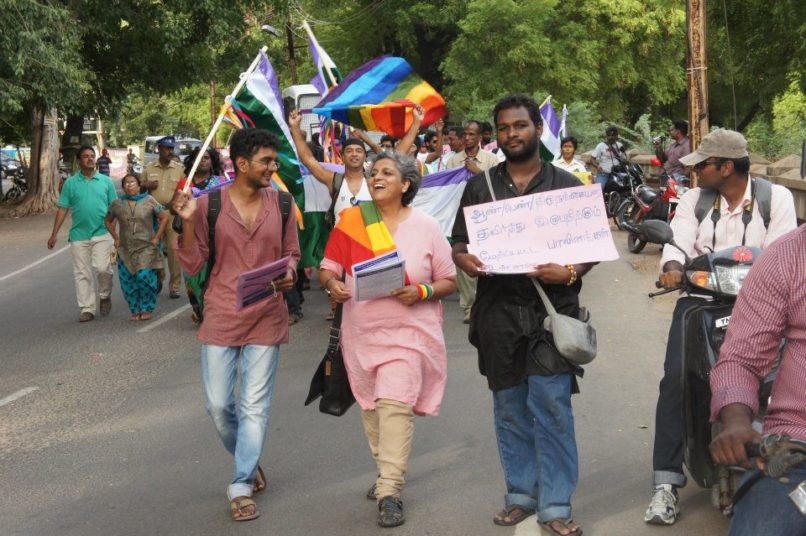 Srishti Madurai was started as the first genderqueer and intersex LGBTQA+ student voluntary group. Founded on September 2, 2011, by Gopi Shankar in Madurai, the group aimed to look into the problems of the LGBTQ people from smaller towns and villages in Tamil Nadu. Instead of merely creating awareness, Srishti took upon the task of educating both community and the public about gender politics and issues surrounding gender and sexuality.

In 2012, Srishti shifted into a Genderqueer and LGBTQIA Literature, a research and resource circle led by student volunteers. This is the first-of-its-kind initiative in India. The organisation approaches all the concept of alternate sexuality through various lenses to impart authentic knowledge about the queer community. In 2014, Srishti moved beyond its focus on studying gender and sexuality into the realm of interdisciplinary studies. In 2014, it became a registered educational research foundation with the name Srishti Madurai Educational Trust. Today, Srishti works at understanding the interrelation between human, nature, and society.

lgbtqia Pride Month LGBTQIA+ stories LGBTQIA+ community pride month 2021 LGBTQIA Organisations in India
Pradyumna kalagi
An automotive enthusiast who believes that there is no better way to see the world than through the driver’s seat. Also loves reading books, playing with dogs and eating cheesecake.
Culture