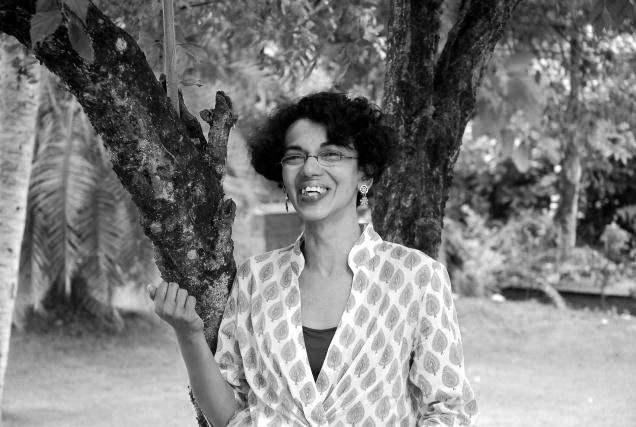 Spill the beans: In conversation with Paris-based poet Karthika Naïr

Culture
Spill the beans: In conversation with Paris-based poet Karthika Naïr
Share this article
Next article

“We can blame my parents for my utterly scrambled cultural DNA,” says poet, librettist, and dance producer Karthika Naïr who was recently in Bengaluru to participate in the 8th edition of the Bangalore Literature Festival. The author of several works including the award-winning Until the Lions: Echoes from the Mahabharata, a reimagining of the epic, says performing arts, cinema, and books in particular were a steady, unobtrusive part of her childhood.

In light of this information, Naïr’s career trajectory makes sense. The Paris-based poet has been the principal scriptwriter of the multiple award-winning ‘DESH’ (2011), renowned choreographer and MBE Akram Khan’s dance solo and its family show-version ‘Chotto Desh’ (2015). In Naïr’s résumé as a dance enabler, one finds mention of dancers and choregraphers like Sidi Larbi Cherkaoui, Damien Jalet, and Käfig/Mourad Merzouki; two Olivier award-winning productions (Babel(Words) and Puz/zle); Festival d’Avignon, the Louvre, the Villette and the Shaolin Temple in Henan. This, of course, is just to mention a few.  ‘Until the Lions’ is a reinterpretation of the ‘Mahabharata’ from the point of view of marginalised voices, which won the Tata Literature Live! Award for Book of the Year (fiction) 2015.

Culture
Flower power: A new book tracks how flowers can give you a lifestyle overhaul

“I have a chronic congenital disorder, Recessive Dystrophic Epidermolysis Bullosa (RDEB) that rules over life. I gave up on ambitions in my teens because with a mostly dysfunctional body, plans had a way of going awry,” says Naïr. She stumbled into a journalistic stint, then art management [in Lyon, France], where producing and curating performing arts, mainly dance, happened rather naturally. Her first assignments in France were in multidisciplinary arts, mostly classical and traditional forms of South Asian performance; she switched to production in contemporary dance and it redefined her life, leading to poetry and ‘Until the Lions’.

Naïr says that the direct trigger for the book was Arun Kolatkar’s masterpiece ‘Sarpa Satra’, an account (in verse) of Janamejaya’s snake sacrifice, which bookends Vyas’ Mahabharata. “A major section of it is recounted by Jaratkuru, his mother — so, one of the most compelling tellings I have read of the epic is from the perspective of the snakes who are collateral to the power and anger of humans. I like to say it rewired my synapses and made me think of the dangers of the single narrative, of imagining oneself to be the centre of every story. And a nation(s), or people(s), who are determined to erase every other perspective, after millennia of – sometimes desired, sometimes organic, sometimes ordered – shared visions, contiguous narratives,” she explains.

‘Until the Lions’ took two years to research, which to Naïr were more like an exploration of one rabbit hole that led to not a warren but an entire empire underground, she says.

Naïr’s first was work was ‘Bearings‘ (2009) and she recalls how, despite not having any connections in publishing, it was appreciated and recommended by the likes of Pramod Kumar K.G (co-founder of the Jaipur Literature Festival), Jeet Thayil, Paul Zachariah, Anita Roy, Mita Kapur, to finally reach Karthika VK, the then chief editor of Harper Collins India, who asked for more, to make it a collection. She also has illustrated children’s books to her name, of which ‘The Honey Hunter’ an invented fable borrows two of its protagonists – the goddess Bonbibi, worshipped by both Hindus and Muslims and the demon tiger Dakkhin-Rai – from the cosmogony of the Sundarban mangrove forests.

As someone who hasn’t studied literature or writing, it is Naïr’s own creative pursuits that interlace and influence her works. “Performance, especially dance, remains my primary reference in writing. Similarly, the structure, rhythm, non-linearity, and tangentiality of poetry considerably predicate my writing for stage. Sometimes the results are obvious, intended; subterranean at others. They could also be inadvertent, unconscious.”

It is this oldest form of expression that has her heart. “It isn’t mere coincidence that all the greatest, oldest epics were written in verse, whether its Gilgamesh, Mahabharata, Iliad or Aeneid. It may change form, medium, and audiences, and it can be many things to many people at the same time.”