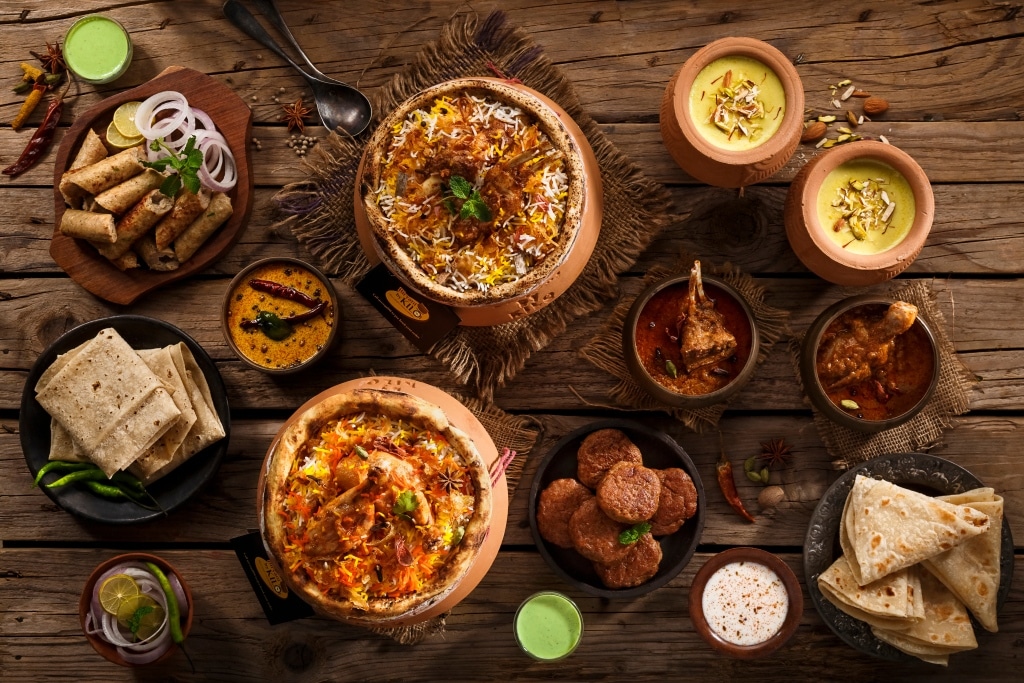 Dial-up the biryani: Delivery services in Delhi for an easy start to the new year

Food & Drink
Dial-up the biryani: Delivery services in Delhi for an easy start to the new year
Share this article
Next article

Golgappa, puchka, panipuri. Kheer, payasam, payesh. The same dish almost always has different names in different regions, but the one that stays unwavering in its identity is biryani. Kolkata, Hyderabadi, Awadhi – diverse locales have given their own twists to this rice dish. Biryani is a strong contender for being the favourite dish of a country as heterogenous as ours. Here we curate the list of the five choicest services for biryani delivery in Delhi.

Biryani by Kilo has taken the capital by the storm. This direct popularity indicative is supported by their khansama style of cooking, wherein they prepare each biryani fresh, after the order is placed. True to their name, they serve biryani handis by the kilo and have options ranging from chicken, mutton, kathal, and egg made in Hyderabadi, Lucknowi, and Kolkata styles.

What we love is their single portion biryani. While most places only do orders that serve a minimum of 2-3 people, Behrouz has a single person option so one can relish their biryani without wastage or guilt. Ideal for one’s biryani craving quick-fix, they deliver between 30-60 minutes, and are high on flavour and styles. From Dum Ghost to Murgh Makhni, Paneer to Subz-e-Falafel, their eclectic menu is a must-try.

An effort to serve the flavours from within the walled city to those far away from it, Delhi 6 delivers the typical biryani from Purani Dilli. They claim to use the traditional Mughal art of cooking biryani that has been handed down generations inhabiting the area. The result supports the claim and makes it a must-try. They have a daily menu and require one to place the order a day in advance. Their mutton and chicken dum biryani are sellouts. They also offer to deliver any dish one may have tried within the walled city.

The sheer variety of biryani and the options to have it makes Biryani Blues worth your next order. Delivering under 40 minutes, they’re at 26 locations across Delhi NCR. They do Hyderabadi biryani specifically, which brings together Arabic, Turkish, and Mughlai flavours with Andhra and Marathwada spices. Wholesome in their taste and fluffy rice, they’ve got Chicken 65, soya, egg, and potato biryani other than the regular varieties.

A home cook operating out of Vasant Kunj, Mansi Seth Kapoor runs the on-order Awadhi Season. She exclusively makes the Lucknowi style biryani in three options – mutton, chicken, and vegetarian. Her subtle flavours and fragrant rice bring the biryani to life, with just half a kilogram of her preparation ensuring five satisfied diners. Expert cooking skills and great quantity make the one day wait worth it.

Food Delivery Delivery Services biryani Delhi Food Hammer Kolkata
Megha Uppal
Associate Editor
An innate love for travel and food has translated into many a trips since childhood for Megha; it also fed her curiosity to know about local cultures. When not writing, she is on the lookout for three things: A great dark chocolate dessert, a beautiful pool where she can practice her backstroke, and art that she can save up for.
Travel Culture Food Drinks

Cooking through the pandemic? Here are 3 quick, sustainable recipes to try

Order now: These are the best oriental cuisine deliveries in Kolkata