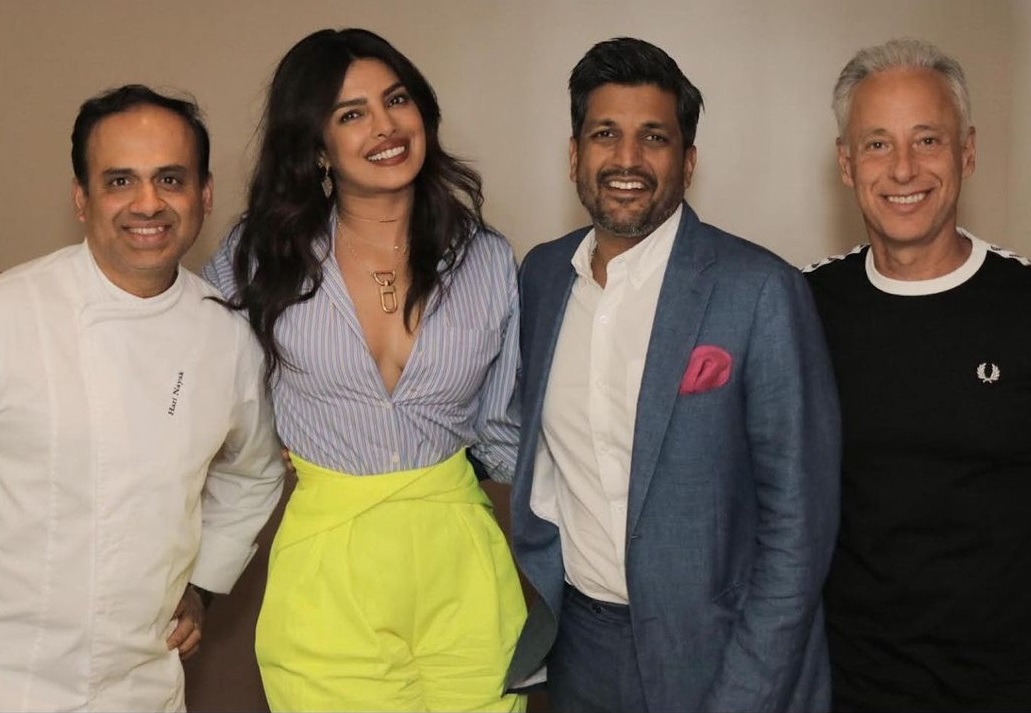 Film stars and music icons around the world have entertained us and made a place for themselves in our hearts. No matter what task they take up, they excel in it and ensure not to disappoint their loyal legions of fans.

Over the years, many such celebrities have ventured into different domains and turned into successful entrepreneurs. Teaming up with renowned chefs and restaurateurs, these eminent names from the world of entertainment have stepped into the flourishing business of restaurants, which lure customers with their eclectic decor, delectable cuisines and impeccable service.

Celebrities who own restaurants and bars —

The multifaceted artist joined hands with Miami’s nightlife king and founder of Groot Hospitality David Grutman in 2018 to start Swan and Bar Bevy — a two-floor joint designed by Ken Fulk. The 13,500-square-feet restaurant and cocktail lounge in Miami’s Design District boasts an exquisite menu curated by executive chef Jean Imbert. The delicacies are made with locally available and sustainably procured ingredients.

Swan, the restaurant, is on the first floor. Bar Bevy serves drinks on the second floor, where the decor comprises jewel tones, Moroccan detailing and psychedelic artwork. Additionally, the second floor has a DJ booth, karaoke and screening rooms. The perfect place to let your hair down.

Singer Bon Jovi and wife Dorothea started their first JBJ Soul Kitchen in 2011. The non-profit community restaurant has served 136,715 meals to date. Their message: “All are welcome at our table where locally sourced ingredients, dignity and respect are always on the menu.”

The pair runs three kitchens across New Jersey. The best part about Soul Kitchen is that people from all sections of society can eat together at communal tables — truly promoting the concept of “community dining with dignity”.

The volunteer-run kitchen was Dorothea’s idea. Although prices aren’t mentioned on the menu, customers who can afford to pay more help with covering the costs for the underprivileged.

On 29 September 2021, the renowned rapper and songwriter surprised everyone with his food joint Mom’s Spaghetti. The eatery in Detroit, which is also his hometown, serves lip-smacking spaghetti, rabbit balls (vegan), meatballs and s’ghetti sandwiches. The restaurant’s name is inspired by the opening lines of his Oscar and Grammy-winning piece “Lose Yourself”. Eminem also surprised a few lucky fans on the day of the opening by serving them food himself.

Mom’s Spaghetti has limited seating space but customers can collect their order from the joint’s walk-up window. The eatery marks his partnership with Union Joints Restaurant Group.

Robert De Niro co-owns three restaurants in New York. Manhattan’s Tribeca Grill was founded in 1990 with restaurateur Drew Nieporent; Locanda Verde was launched in 2009 and is co-owned by Chef Carmellini, Josh Pickard and Luke Ostrom with their partners at The Greenwich Hotel, Ira Drukier and Richard Born; whereas, Nobu restaurant and hotel chain, which the actor owns with chef Nobu Matsuhisa, is based on a partnership with Drew Nieporent and producer-businessman Meir Teper.

Nobu has spread across the globe, including Houston, Milan, San Diego, Monte Carlo, Bahamas, Doha and Manila. Its exotic Japanese cuisine is unmatched.

SONA, an Indian cuisine restaurant, is owned by an award-winning actress and producer. David Rabin and restaurateur Maneesh Goyal collaborated with her for this venture which was launched in 2021.

The New York restaurant has a private dining room named Mimi’s — which is also her nickname. According to its official website: “SONA reimagines the wonders of Indian fare in a space that evokes a bygone era of a boisterous yet elegant India—all within the heart of New York City. This is timeless India.”

Guests can choose from a host of eclectic choices like golgappa shots, Bengali mustard tofu, gruyere cheese dosa, and several other brunch, dessert and beverage options.

The Birdbox actress started Watson’s Fancy and Staple in 2009. Watson’s is an all-rounder of sorts; it is a bakery, deli, coffee shop and florist and provides catering services and gifting options as well.

From avocado toast and biscuit sandwich to chicken Caesar wrap and pastrami, Watson’s is a haven for food lovers. Those with a sweet tooth can enjoy their pastries too.

Nothing less than heaven for sports lovers is Jay-Z’s 40/40 Club. Opened by the rapper-businessman and his partner Juan Perez in 2003, the club is famous for its game day-inspired appetizers, delicious entrees, interesting salads, mouth-watering sliders, scrumptious sides and heartwarming desserts.

“I love sports and wanted to create an environment that is conducive to match my lifestyle, while watching the games at the same time,” said Jay-Z talking about the 12,000-square-feet club.

One can select from a wide variety of bottle selections too. Guests have everything — from vodka and whiskey to wine and cognac at their disposal. Their cocktail selection is also pretty impressive. If you want to catch your favourite games while enjoying food, Jay-Z’s sports bar and lounge is the go-to option.

“We tried to create a place that would be favourable to both men and women, and we think we have found it with the combination of sports and an upscale hip lounge,” said Perez.

The first joint of the family-run eatery, Wahlburgers, opened in 2015 in Hingham, Massachusetts. The casual dining burger restaurant and bar chain is owned by chef Paul Wahlberg, Mark Wahlberg and Donnie Wahlberg.

The brothers spread their business empire which went from strength to strength. There are 22 Wahlburgers in the US, one each in Canada and Germany and another one is expected to open soon in Australia, as per the official website. The burger chain also inspired a television series called Wahlburgers in 2014. The 10-season series was aired on A&E.

The menu curated by chef Paul comprises food that he and his siblings relished as kids: juicy burgers, crispy fries, cheesy dips, lip-smacking salads and much more.

Established in 2012 by the American actor, the restaurant in New Orleans has a stunning contemporary bordello decor. Guests can choose from a plethora of seafood options, appetizers and cocktails.

The multi-hyphenated artist became a part-owner of her parent’s restaurant Joanne Trattoria in 2010. Located in New York City, featured artists perform every Friday and Saturday nights — regaling the guests as they enjoy authentic Italian-American cuisine.

The restaurant also has gluten-free options. Enjoy the restaurant’s extensive list of pasta and appetizers. It also offers numerous wine choices, including The Gaga Collection.

The Moroccan restaurant boasts a bevy of beers and wines from around the world. Apart from drinks, the place offers a selection of exotic dishes like homemade baklava, New Zealand lamb chop, fish bastilla, hummus and honey salmon tagine, to name a few.

Chip and Joanna Gaines gained much fame with their home renovation reality show Fixer Upper. The couple added one more feather to their cap in 2016 with Silos Baking Company. In 2018, Magnolia Table became a part of the venture followed by Magnolia Press Coffee Company the next year. The trio is located in Waco, Texas, US.

Magnolia Table’s versatile and scrumptious menu comprises everything — from Gaines Brother burger and eggs benedict to Chip’s famous ham sandwich and homemade pies. The Instagrammable breakfast joint will not only satiate your hunger pangs but will also soothe your eyes with its carefully curated decor.