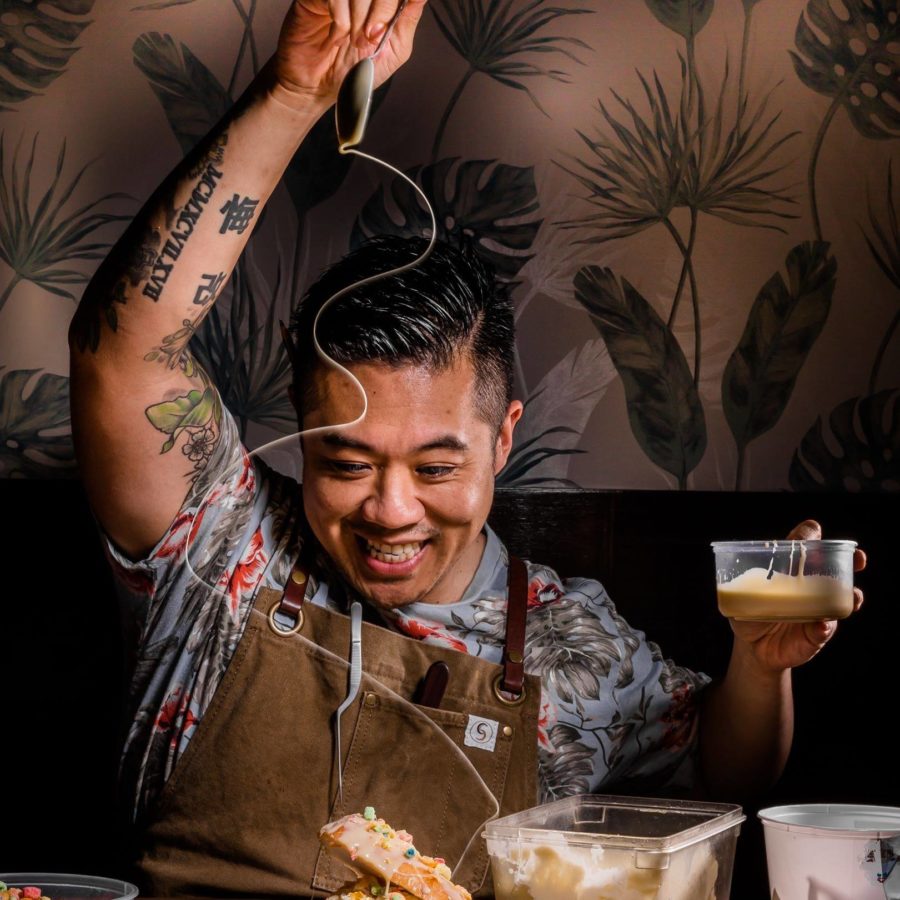 Those of you who have dined at the celebrity favourite restaurant Bastian in Mumbai and wished it had a Delhi outpost, or have simply coveted getting a seat there by seeing its drool-inducing Instagram posts, know this —the man who made the eatery a household name, Chef Kelvin Cheung, is now in the capital.

After an abrupt exit from Bastian last July and moving back home to the US lock, stock, and barrel, the 39-year-old chef is back in just six months, with not one but two culinary experiences. This time ’round his partnership is with White Panda Hospitality, known to host the pan-India food festival The Grub Fest.

Walk through the back lane of Basant Lok market in Vasant Vihar, and towards the end is a striking royal blue door that opens up to Kiko-Bā and Dadel. A restaurant and a bar, respectively, the two share the same address but different floors. “The best way to describe the place is Asian-forward. Not only am I delving into my food memories—things made in my family, a dish I had in Thailand, something a friend made for me—I’m changing those for today’s diner,” says Cheung about Kiko-Bā. “Though the food is predominantly Asian, it’s not locked into it.” Dadel, the bar, epitomises the emotions of ‘Desire, Love, Obsession, Chase, Escape’ in its cocktails as well as food. While the drinks have been designed by Polish celebrity mixologist Bartosz Jakowiec, the bar nibbles are all Cheung again.

Needless to say, 2019 had been a big year for Cheung. Leaving behind Bastian Hospitality, which owns Bastian, One Street, and Whole Some & Then Some, after a little more than three years; moving three cities, opening two new spaces, and the passing away of his father — there was a lot. “It was the first time in 30 years that I took a sabbatical. I’ve worked full-time since I was 12,” says Cheung.

But that’s exactly how he has honed his skill and become one of India’s top chefs. Known for his comfort food that you keep returning to, his innovative spins on popular tastes ranging across desserts and savoury dishes alike had  people make a beeline for his restaurants. And the supremely popular Kel Cake, named after him, is a prime example of that.

While the unprecedented break wasn’t too easy to come to terms with, he shares that, it was much needed. “I was emotionally burnt out. I had to leave friends and restaurants I worked so hard on, and not by choice. But then, how many families can say they got to spend four months together with their newborn? I’m glad these partners understand my priorities, allow me to create brands I believe in, and also work on my personal time. We have a lot of interesting, cool things we’re working on this year.”

A Mumbai boy for the past eight years, Cheung is originally from Toronto, Canada and came to India in 2012 to join Ellipsis. Now in the process of getting used to Delhi, he’s joined by his son, Bodhi (who is one and already has a solid social media fan base), and wife Andrea Brown, a catalyst in the chef’s career. While she was the director of communications for their previous brands in Mumbai, and returned to work eight days after giving birth, Brown’s finally taken a break for now as they settle into their new life.

“The story we tell everybody is that we met in yoga class, which is true, but we’d actually spoken a couple of times previously.” Not surprisingly, their first interaction was around food. “Someone ordered a beef burger [at Bastian] but didn’t want it when it came to the table. After I was told that ‘most people don’t eat beef anyway’, I looked across and saw Andrea, walked over to her, and said ‘You’re a foreigner, you’ll like this burger’ and gave it to her.” However, it was the yoga class that brought them together as a couple. “After the first yoga class, I went back with gluten-free cookies and cupcakes for her, got her phone number, and never went back to class!”

Both Brown and Cheung are good at separating work from home life, which was key in their successful pairing in both arenas. “I’m very blessed to have a partner who understands fully what I do, and that it engrosses most of my energy and focus. She supports, enables, and helps me balance everything. I guarantee that if I hadn’t met her, I’d still be the same chef who was drinking, partying every other day. Whether or not I’d been successful, who knows.”

A third-generation restauranteur today, becoming a chef wasn’t always Cheung’s plan. “It happened when my mother got sick. I was 16 and we were in Chicago at the time. My dad took her back to Toronto. Phoenix was the largest restaurant we’d ever opened, and we had to take it upon ourselves to make it work. So, my sister ran the accounts, my brother helped the front, and I took over the kitchen. That was a light bulb moment, and at the back of my mind I knew that this was what I was supposed to do, but it took a while to sink in.” Since then he’s worked his way across the globe, his cooking ethos evolving simultaneously. “Whether it’s my father’s traditional Cantonese-Hong Kong style, my French culinary school days, opening my own restaurant in Chicago, a Michelin-starred restaurant in Belgium, a hotel in Vancouver, an Italian restaurant in Toronto, and all the travels…it’s really interesting to see the journey it has taken. I don’t think I could ever do fine dining again. Now my food is more fun dining. Comfort food, food that you crave and can eat more often. The standards are still as high, but the style of cooking and service is very different.”

Today, known for his signature style, it was his desire to share food with people more often that paved the way for this fun dining. “I want to create experiences that feed the soul, the heart.” And that extends to the chef’s social media as well, where he’s immensely popular. While it all started with Twitter—his then boss set it up for him—and Cheung wasn’t too enthused with the idea, it was Instagram that made him a digital celebrity. “I’m very appreciative of how I’ve reached this point. I still don’t understand how or why. Then again, I think it’s because it’s so real. I would’ve never garnered this much power and attention without social media.”

Borders, cultures, trends, and decades – Cheung agrees it’s been a roller-coaster so far. “Who would’ve thought that a Canadian-Chinese kid from Toronto, who went from being nerdy and nice in school to a very not-so-nice kid doing a lot of bad stuff, work his way across the globe to India? It’s been a very interesting ride.”

New Restaurants Chef Kelvin Cheung Dadel Kiko-Ba
Megha Uppal
Senior Associate Editor
An innate love for travel and food has translated into many a trips since childhood for Megha; it also fed her curiosity to know about local cultures. When not writing, she is on the lookout for three things: A great dark chocolate dessert, a beautiful pool where she can practice her backstroke, and art that she can save up for.
Travel Culture Food Drinks