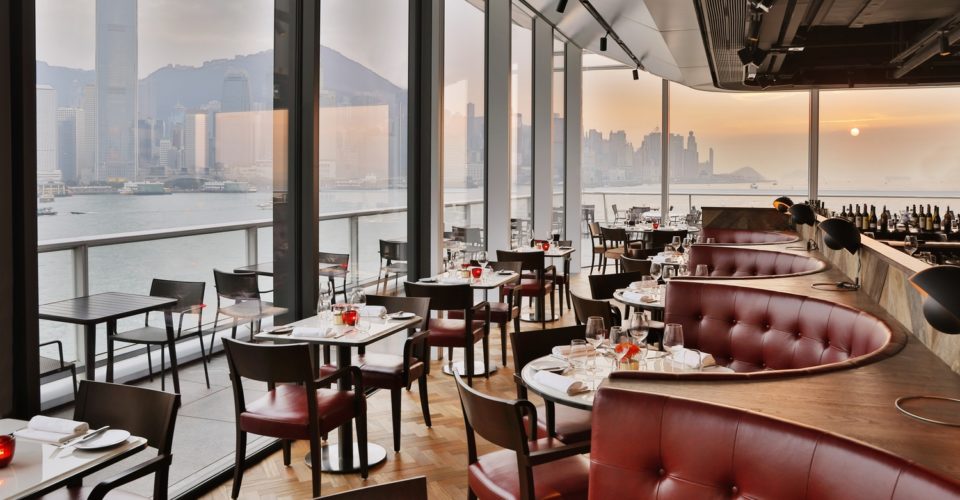 Food & Drink
First look: Gordon Ramsay’s Maze Grill serves up charcoal-grilled steaks with a side of harbourfront views
Share this article
Next article

Put the face of an international celebrity chef on a restaurant and the crowds will inevitably descend: This seems to be the strategy of local restaurant group Dining Concepts, and a wildly successful one at that — having staked much of their reputation from the last 13 years on partnerships with big-name chefs including the inimitable Gordon Ramsay, whose face is perhaps one of the most recognisable in the global culinary arena.

Following the temporarily shuttered Bread Street Kitchen & Bar in LKF and British gastropub London House, newcomer Maze Grill is the third collaboration with the notoriously hot-tempered TV chef, and it’s now open in Harbour City. Specialising in a crowd-pleasing combination of steak and sushi, Maze Grill first opened in London in 2008 and has since gained prominence in London’s steakhouse scene, serving up premium beef cuts, bistro-style sides and a selection of sushi with American-leaning sensibilities (think California and tuna tartare rolls).

Although bearing the name of Ramsay’s ubiquitous steakhouse chain — Maze Grill Hong Kong isn’t a clone of the UK flagship, however, having ditched the sushi portion of the menu for 16 original appetisers created by head chef Gareth Packham (previously at Bread Street Kitchen & Bar) with a strong influence from Japanese ingredients. In a stark reminder of the times we live (and dine) in, chef Packham plainly advertises these as the camera-friendly offerings upon our first visit to Maze Grill; in an otherwise brown, colourless menu, the vibrant appetisers will be geared towards “circulating around social media” in the coming weeks.

Step into Maze Grill and first impressions are of the breathtaking views: The restaurant sits just at the end of the Ocean Terminal Extension, with the newly built digs jutting out into Victoria Harbour and offering unobstructed views of the harbour and island skyline from the 180-degree wraparound terrace. On the evening of our visit, we were greeted by a mesmerising sunset sending ripples of red and yellow across the deck — enough to make us want to sit for hours on end, soaking up the views with a cocktail in hand. In these few weeks of breezy weather as we transition from summer to fall, there may not be a better Kowloon-side venue to while away the lingering dusk hours.

Inside, the restaurant seats 70 diners (80 outside), with an L-shaped layout making the interiors feel a bit more snug than your average steakhouse. Cosy for a tête-à-tête or a dinner date for two, the dining room is outfitted with half-moon booths in Maze Grill’s signature hue of red leather, with bistro-style bulbs mounted on the walls casting a warm glow, and tables for two spaced out along the floor-to-ceiling windows. Towards the entrance lies a separate bar area, where guests can plop down on comfortable bar stools for a pre- or post-meal tipple.

While steaks are served with minimal pomp and circumstance, the starters section spans the gamut of international flavours, from Wagyu tataki to smoked chicken wings and Spanish-style Galician octopus. The chef’s recommended salad — if it can really be classified as that — is the confit duck (HK$138), which is more or less a bonito-crusted, fried leg of meat given the appearance of a salad with watercress and spinach leaves, watermelon and pomegranate. The meat itself is decadent, having infused all the juices from the duck fat and made extra rich with a luscious duck fat jus. Other signatures include the Traditional Ploughman’s Pork Pie (HK$158), carved table-side; the sliced snapper (HK$118), marinated in a ponzu sauce and finished with pork crackling; and the prawn and chorizo toasts (HK$118), which suggest a Western version of okonomiyaki pancakes with meat and seafood-topped fried toasts drizzled in a tart yuzu mayo.

Mains encompass grilled beef, fish and poultry, paired with classic steakhouse sides and sauces. Other than a couple of pastas and salads, options for vegetarians are severely limited — but that should go without saying: You come here with meat on the mind and the kitchen delivers, from British sirloin beef to Japanese Wagyu, all broiled to an exacting medium-rare on the blazing Josper grill. On the evening of our visit, we tried the Lincoln Red T-bone steak — a native UK breed fed on both grass and grain. In addition to the rich, subtly gamey flavour imparted by a 38-day ageing process, the steak bore a delicious juiciness and caramelised charcoal crust — a byproduct of the fat sizzling onto the burning embers of the grill and infusing back into the meat itself.

Other British cuts range from sirloin to fillet (all dry-aged a minimum of 28 days), while the international selection includes decadent Australian Wagyu and Japanese A5 Wagyu. For sharing, there’s the chateaubriand for two, priced at a reasonable HK$688 for 450g, and the surf ‘n’ turf duo of lobster Wellington and beef Wellington — the latter a Ramsay signature with the pastry-encrusted premium meat drizzled in a luscious peppercorn sauce. Side dishes add an extra layer of unctuousness to the meal, from bone marrow mash to short-rib stuffed Yorkshire pudding to (rather excessive) add-ons of grilled bacon, seared foie gras and black truffle priced by the gram.

As for desserts, the sumptuous sticky toffee pudding redolent with fall spices is a fan favourite, brought over from chef Packham’s days at Bread Street Kitchen — but we couldn’t stop eating the coconut and dark chocolate cremeaux: moist cake mounded with slices of fresh coconut, coriander and a passion fruit-filled centre. As for the wine list, expect it to mirror the food menu in accessibility and affordability, inundated with easy-to-drink labels from major wine regions across Italy, New Zealand, France and Argentina. Signature cocktails also make do with simple yet crowd-pleasing ingredients. We recommend the elegant sipper of thyme-infused Belvedere Vodka vermouth, honey apple and a foamy egg white cap; or the Fleetwood Mac (HK$98), which harmonises Tanqueray gin with violet liqueur, lemon, rosé and a dash of plum bitters.

In an age where tweezered plates, foams and froths run rampant across upscale restaurants, Maze Grill can be refreshingly straightforward — a fuss-free steakhouse which eschews fancy menu descriptors and esoteric ingredients for simple yet immensely crowd-pleasing fare. While Ramsay may more or less be just the face to the brand, chef Packham and his team are making brilliant use of the charcoal grill to serve some very well-executed steaks at reasonable prices — which should, after all, be the one and only measure of a good steakhouse when all’s said and done. Worth braving the maze that is Harbour City itself to locate this gem inside the glasshouse extension, Maze Grill has all the bearings to become a worthy new addition to the city’s steakhouse scene.

Maze Grill is now open for all-day dining and cocktails on the terrace; Mon–Sun, 11:30am–11pm.

New Restaurants New Eats Dining Hong Kong Dining Gordon Ramsay Harbour City Dining Concepts Where to eat Steakhouses best steakhouses steak restaurants maze grill grill houses
Leslie Yeh
Editor in Chief
Having worked as a lifestyle editor for almost 10 years, Leslie is thrilled to be writing about the topic she loves most: wining and dining. When she's not out pounding the pavement for the latest new restaurant opening or tracking food trends, Leslie can be found at home whipping up a plate of rigatoni vodka and binge-watching Netflix with a glass of Sauvignon Blanc in hand.
Dining Restaurants Food Trends Drinks Travel

Should you go vegan or mediterranean for weight loss?

These hotels in Bengaluru are offering sanitised gourmet dining experiences