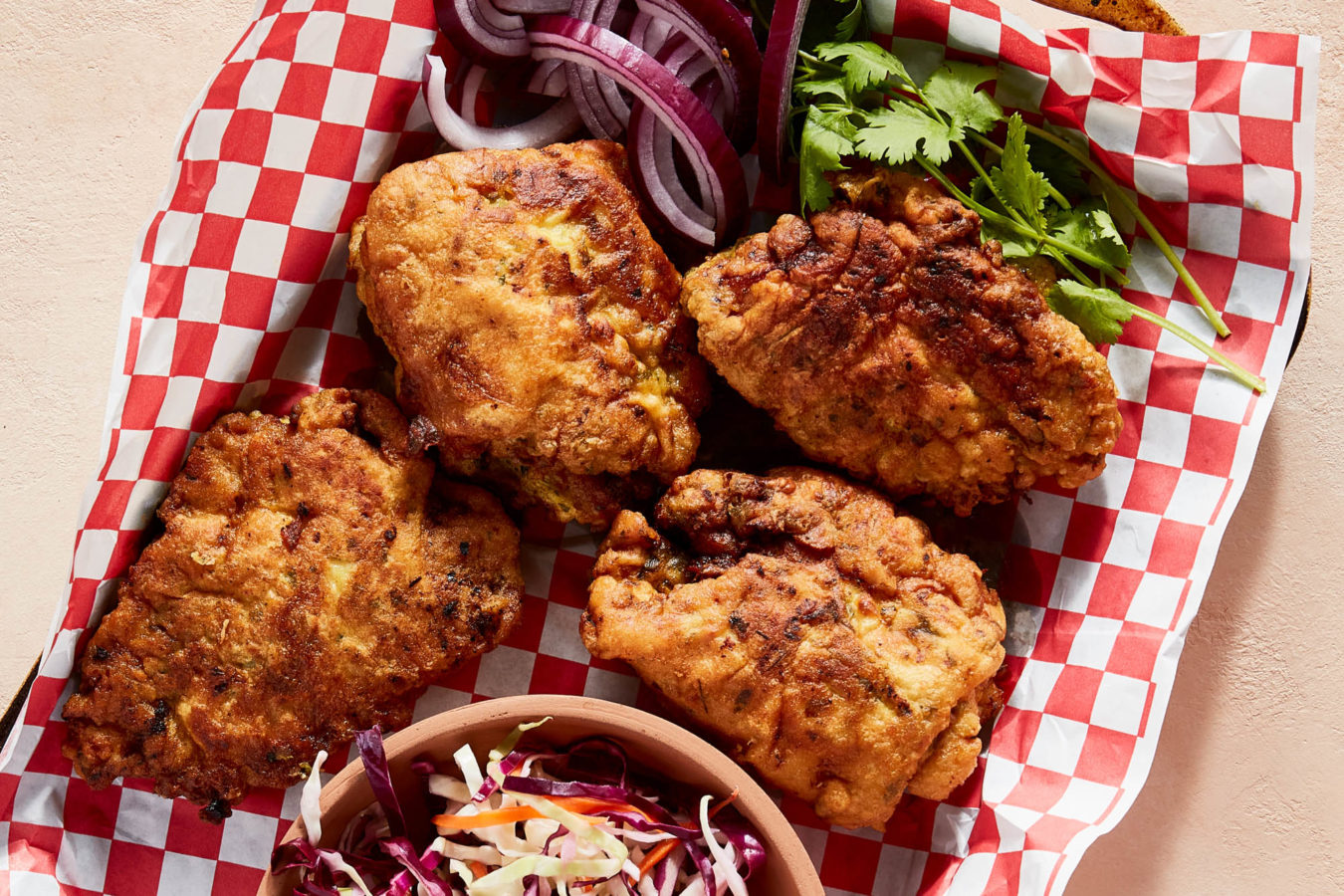 How to make your new favourite fried chicken

After a brief break, we’re back with season two of Chefs at Home and this next batch of episodes kicks off with Meherwan Irani, owner and executive chef of the Chai Pani restaurant group and founder of Spicewalla. He prepares three different Parsi dishes, starting with Kaera Na Cutless (Spicy Green Banana Cutlets), which he says “reminds me of my childhood.” Then, he prepares Parsi Kheema Pav (Curried Minced Lamb on Buns) in two different variations, one traditional and another called the “Sloppy Jai,” which is his nod to Sloppy Joes. Finally, he wraps things up with Marghi Na Farcha, Parsi Fried Chicken, served with a quick cabbage slaw.

Want to make them all? Read on for his methods and follow along.

To make these cutlets, Irani recommends using the greenest bananas available, since you want these to be savoury cutlets, not sweet. After you’ve boiled them, let them cool and drain before you peel them. Next, add the bananas to the bowl with the boiled, peeled, and roughly mashed potatoes, along with the toasted and crushed cumin seeds, white onion, cilantro, garlic, ginger, green chilli, kosher salt, and pepper. Mash everything together — taking care not to over-work the mixture — and then shape the mixture into evenly-sized balls, which you can press into cutlets.

At this point, all that’s left to do is fry the cutlets. Coat them in the panko breadcrumbs and (carefully!) get them into the oil. Irani explains that you’ll want to hear a gentle sizzle as the cutlets touch the grapeseed oil. Once they’re deeply golden brown and crispy, they’re ready to eat. Irani serves the finished cutlets with Maggi ketchup, as well as kachumber (a Parsi-style salad, he says, which Persians call salad Shirazi) on the side.

“Oh my god, that’s ridiculous,” Irani says as he tries a cutlet.

Next is the Kheema Pav, which Irani says “marries Mumbai culture, Parsi culture, and sort of street food culture.” The main ingredient here is the ground lamb, which gets flavoured with all kinds of spices, plus ginger, ginger-garlic paste, and green chilli. It all comes together in a skillet on the stovetop with red onion, yoghurt, crushed tomatoes, rice wine vinegar, and jaggery.

After the meat is done cooking, you can assemble the Kheema Pav, and Irani demonstrates both preparations. For the traditional plating, he grabs his split pav and spreads butter on them, and adds them to a serving tray with the kheema, as well as white onions, green chillis, and cilantro for garnish. A squeeze of lime juice and some chaat masala finish it all off.

For the Sloppy Jai, on the other hand, he spreads some Maggi ketchup on a pav, adds some kheema on top, and then garnishes it with cilantro, onions, green chillis, and a drizzle of green chutney.

“No matter how many times you have it, it’s just amazing every time,” he says of the Sloppy Jai.

Last up is the Marghi Na Farcha, which starts with a marinade packed with green chilli, garlic, ginger, cilantro, toasted cumin powder, salt, turmeric, Kashmiri chilli powder, and lime juice all blended together. Grab some plastic gloves and rub the marinade all over your chicken thighs in a bowl, then cover the bowl and let the chicken sit in the fridge for at least 30 minutes, or up to five hours.

Once the chicken has had time to soak in all of that flavour, you’re ready to fry. Irani likes to use a cast-iron skillet, and he dredges the chicken first in flour before dunking it in beaten eggs. You’ll want to make sure your oil is at temperature (165°C), which you can check with a temperature gauge. Then, gently lay your chicken in the oil, facing away from you to avoid splatters. As it fries, ladle some of the oil on top to help the top crisp, and use two spatulas when flipping. You ultimately want the chicken to register 71°C when an instant-read thermometer is inserted into the thickest part of the meat, and the exterior should come out golden and crispy.

To round the dish out, Irani whips up a slaw using shredded cabbage, shredded carrot, salt, sugar, lime juice, and maple vinegar (you can also use rice wine vinegar). He recommends preparing it before frying the chicken so it has time to marinate. Then, once the chicken is done, you can serve them both together.

After taking a bite, Irani says, “Wow, this is gonna be your new favourite fried chicken.”

Is this the way to a more ethical production and consumption of Caviar?

Top 10 food destinations in Europe for vegetarians and brunch-lovers