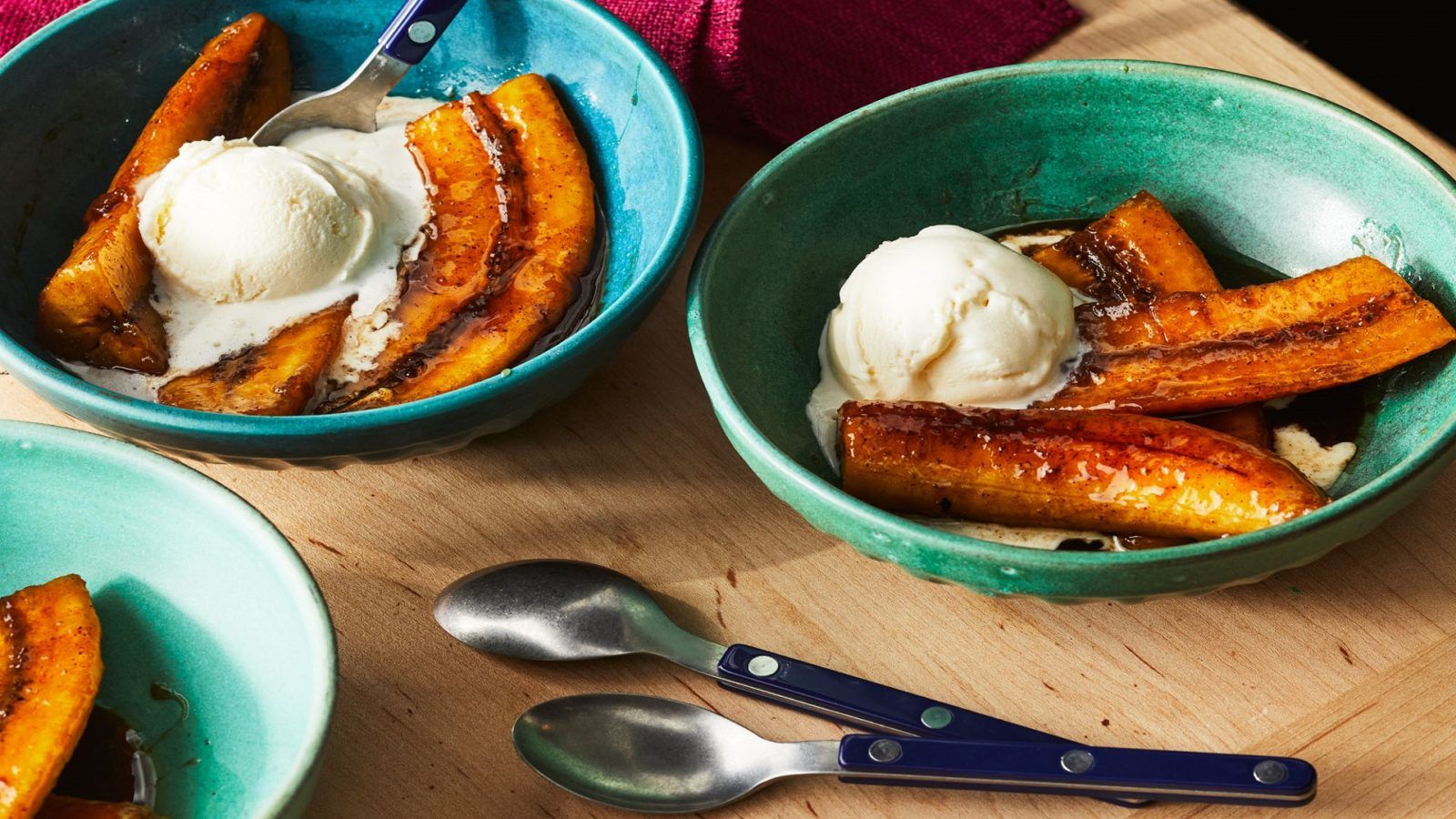 If you love Bananas Foster—the iconic dessert where bananas tossed in a caramelly, boozy sauce are flambéed and served with vanilla ice cream— this is for you. Paola Velez shares her recipe for Platanos Foster, which gives the classic a Caribbean twist by using plantains instead of bananas and adding some warm spices and coconut water to the caramel sauce. She also likes to pair the cooked plantains with rum raisin ice cream, whose rum flavour matches the rum in the caramel sauce beautifully. Start to finish, the impressive dish takes just 20 minutes to make, so you can even pull it off on a weeknight if you’d like.

Prep and cook the Plantains

You’ll need two extra ripe plantains for this recipe. Peel each one, cut them in half crosswise, and then carefully cut each piece in half lengthwise. Then, grab a large cast-iron skillet and melt the coconut oil and butter in the pan over medium. Add the plantains in flat-side down, and let ’em cook until they’re light golden brown, about two minutes on each side.

Next, add some coconut water to the skillet, stir the plantains, and then cover the skillet with a lid.  Turn the heat down to low and let the plantains cook for a few minutes until they’re soft, turning them once. Then, transfer them to a plate so you can get started on the caramel sauce.

Turn up the heat under the skillet to medium and add the light brown sugar, ground cinnamon, ground nutmeg, ground clove, kosher salt, and a little more coconut water. Stir the mixture until the brown sugar has melted, and then add the plantains back into the skillet, letting them cook for another minute on each side.

It’s time to flambé! Take the skillet off the heat and add the rum and crème de banana. Carefully—carefully!—use a long matchstick to ignite the liquor, and have your skillet lid on hand in case the flames get out of control and you need to smother them. Paola also notes that if your microwave is over your stove, you should make sure to not flambé directly under the grease trap.

After the flames have burned out, you can return the skillet to medium heat and add the rest of the coconut water. Stir until a caramel sauce forms, and let the plantains cook in the sauce for just a few minutes more until they’re evenly coated.

At this point, you’re ready to eat. Grab some bowls and divide the plantains and sauce among them. Then, top each bowl with two scoops of rum raisin ice cream. Drizzle some more caramel sauce from the pan on top of the Platanos Foster if you’d like, and then grab a spoon and savour every caramelly bite.

“Wow,” she says. “That is amazing. It just feels like a warm hug. I don’t know, I always say that. But really, sometimes, we just need a warm hug in the form of Plantains Foster.”

(This story first appeared on www.foodandwine.com)

9 easy and healthy ways to fast during Navratri