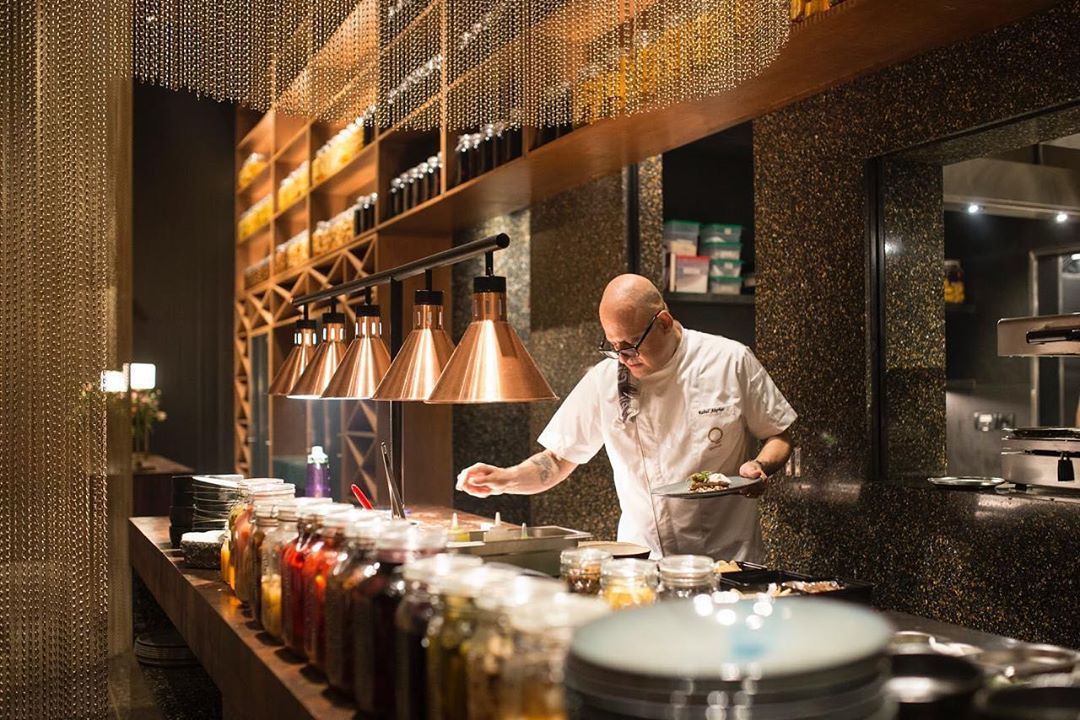 It’s a little over two months that the bay city has been revelling in the likes of Yellow Fin Tuna Tartare, Kohlrabi Carpaccio, Barbecued Quail, and more. The fun sounding, looking, and tasting dishes are a product of none other than Qualia Mumbai — Chef Rahul Akerkar’s latest gift to the city’s culinary landscape. The man who built the iconic Indigo into what it is and helmed it for close to 20 years before passing on the ropes in 2015 has returned after a four-year hiatus, and the excitement for his new restaurant is not going away anytime soon.

Food & Drink
Fresh in Mumbai: All the new restaurants you need to check out

“It’s going great!” he exclaims about the first few weeks into the opening. And the popularity is evident as they’re soon to launch a lunch menu. Entirely different from the current dinner and bar menus, the day service will carry sandwiches, burgers, eggs, and such. As he takes breaks from our chat to taste & test the dishes, I see the behind the scenes of why Akerkar’s restaurants catch the hearts of patrons — the attention to detail, the care taken to consider everyone’s opinions, simultaneously training his team, not settling for anything but the best — it all comes together in the laborious 20-minute discussion per preparation. From inspiration, which can be from anywhere, “I’m at a friend’s house, they serve a Gujju thali or something and I think this would be really nice with pork chops”, to experimentation, “you have that kind of filed away in the back of your head, so you recreate from your mind”, and finally to execution, it’s a “real evolutionary process” he says, and seeing his and his kitchen’s spirit when working on the food, it surely is.

Twenty-foot high ceiling, 100-foot glass frontage, imposing yet friendly interiors, a bar that runs through the restaurant and is lined by pickle jars, the 4,000 sq. ft. space has been designed by architect Kapil Gupta; and it all converges towards giving life to what the word ‘qualia’ means: Individual instances of conscious experience. “It was interesting because initially I probably wanted to open a smaller, more homey style restaurant, but then I saw this space, it screamed at me…it’s a grand space and required a grand treatment.” While the look and feel may have gone more towards grandeur than casual, the essence stayed the same, “It’s very elegant without being staid and formal, right. We were very clear that even though we would bring a very food-focused place, it had to be fun dining, not fine dining. We wanted people to share, have a convivial approach to dining, and that’s pretty much it.” And hearing the hostess next to us answer multiple reservation requests to a full house for the evening, that seems like the direction the diners were seeking too.

The food at Qualia is based on the sweet-sour flavour profile, “For me, when things taste great they either have the traditional umami characteristics, or if they have acidity you get that pop of freshness, so both of those work.” Yet, he prefers not to give a set definition to it, “It’s kind of inspired by western cooking techniques, but we also play with local flavours and ingredients, and we have a lot of our pickled stuff in our dishes, we put things together on a plate because they go well together, we’re not using any cooking style per se…you know designer Arjun Khanna said to me one day that it’s just really good looking soul food, he said every dish touched his heart, I thought that was really nice.” Another description by a diner he feels fits the food aptly is ‘cuisine agnostic’.

The break meant Akerkar had enough time to travel the globe and bring home a fresh perspective, “With Indigo, towards the end, we were so immersed in it all, you don’t get time to step back and really look at things holistically, you tend to get a little myopic. So part of our travel was to, as they say, ‘dimaag fresh karna’ — step back and live a little bit, taste, enjoy, see, experience. Also, frankly, just to see how the world is eating and what people are doing, that was an interesting learning.”

And what he came across reflects in what Qualia is today, “It’s more the way they’re eating than what they’re eating. Very few people want to dine in the old fashioned sense of the word, today people are more interested in tasting little things, tasting a bunch of things. I don’t want to say the food is secondary to the experience, because it’s not, but the experience counts for a lot also. It’s the ability to hang out with friends and share a convivial atmosphere to eat…that’s what people really want.” Their open kitchen is also an extension of that element, “I also love the idea of open kitchens, got nothing to hide! I wanted my chefs to see the food, I want the people eating the food to see who’s making it, it’s all there in your face, it’s a really good energy [to have].”

And the good energy resounds through the place, you feel it the moment you step in, it’s like a refreshing current of excitement. There’s no doubt that Qualia is special to Akerkar, but what makes it even more so is that his daughter, Shaan, has joined him in running the restaurant. Shadowing him and taking on responsibilities at the front of the house, this is her first step into the world of F&B, and as Akerkar puts it, working together is a learning experience for both of them!

When asked about the future of Qualia, “The long term vision for the restaurant is to keep it running!” Akerkar laughs. But with them launching a lunch service merely about two months from the opening date, that fundamental bottom line surely seems on track, and what one hopes is another legacy in the making for India’s restaurant industry.

Chef Interviews Mumbai Food Rahul Akerkar Qualia
Megha Uppal
Senior Associate Editor
An innate love for travel and food has translated into many a trips since childhood for Megha; it also fed her curiosity to know about local cultures. When not writing, she is on the lookout for three things: A great dark chocolate dessert, a beautiful pool where she can practice her backstroke, and art that she can save up for.
Travel Culture Food Drinks

This is the best way to reheat pizza in the oven