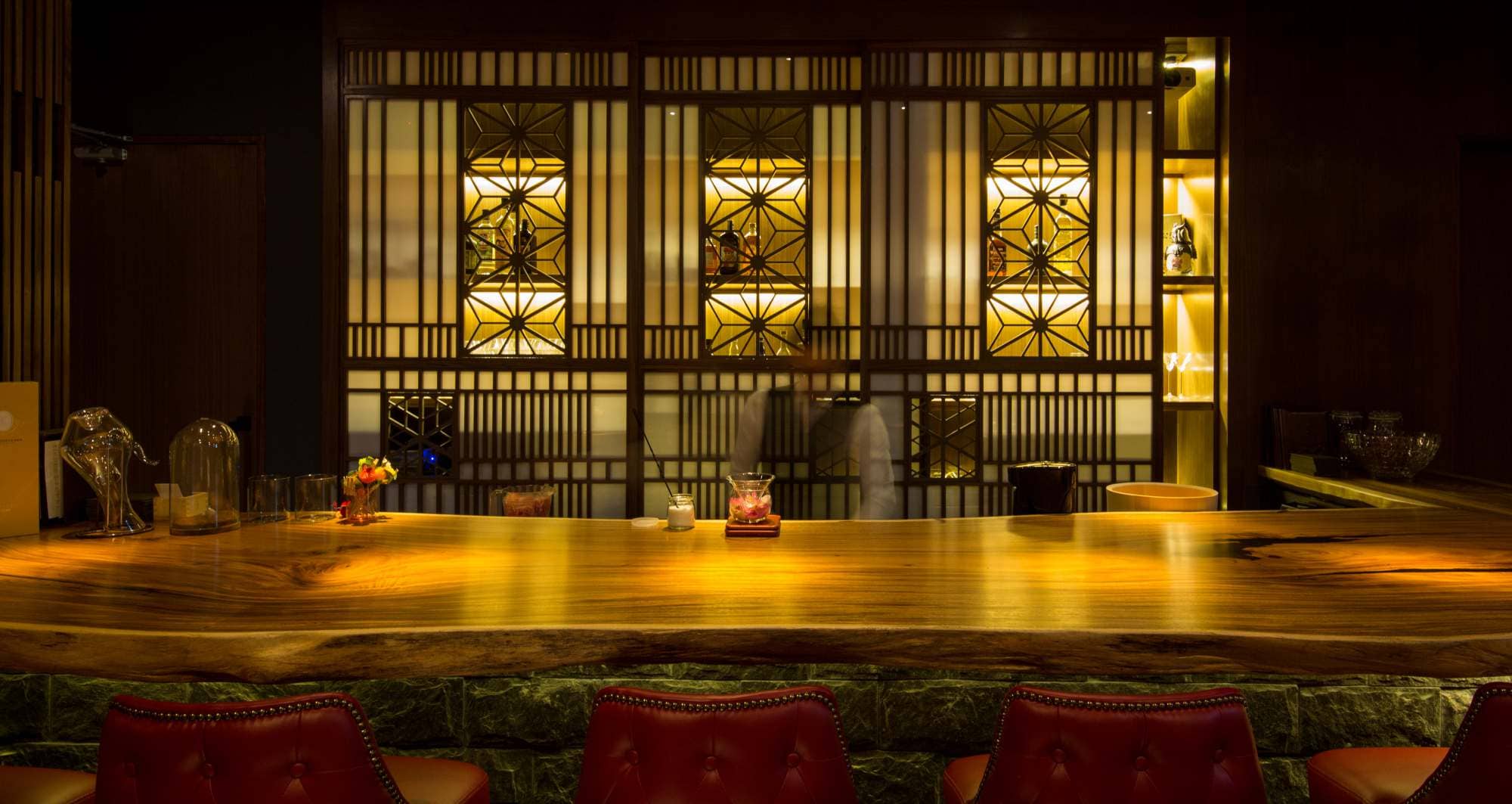 Like everything else that the Japanese do, their bartending style takes precision of skill to the highest level, demanding no less than perfection. Rather than the Western approach of churning out drink after drink for a busy bar, the Japanese bartending style takes the time to focus attention to detail on each individual drink and guest. It encompasses the spirit of omotenashi, the Japanese hospitality that they’re known for. And it is precisely this spirit that you can find in Bar Shake KL.

Similar to most great Japanese bars in their homeland, they’re often nestled in an unassuming building — Bar Shake is no different. Located in Platinum Park along Persiaran KLCC, the cosy bar is connected to the newly-opened Sushi Ryu. This enables diners at the restaurant to head directly towards the bar after their meal for the next part of their evening. It’s certainly not a place you’d stumble upon by chance.

Helmed by Sam Kinugawa, you’d probably recognise the man from his previous bar in Empire Damansara, The Bar Kinugawa. Hailing from Tokyo, Kinugawa decided to move to KL five years back to start a Japanese-style bar here. This is his second venture after The Bar Kinugawa, which has since been taken over by his Japanese friend. The former bar is now known as Iki-Ya.

Bar Shake is by no means large, yet not a shoebox either. It fits a comfortable amount of people without feeling like you’re in a Zouk club. Step into the bar and let your eyes adjust to its surroundings — you’ll soon find the dimness comforting as you watch Kinugawa at work while enjoying your cocktails. There is a hush that fills the bar, but it’s not uncomfortable. Choose to sit by the bar or by the tables. If you want your privacy, there’s a corner seat with a touch of Japanese elements — the wooden screens and green moss. For even more privacy, there’s a hidden private room with chandeliers and chesterfields — perfect for a private rendezvous with friends.

The cocktail-making and customer service is where you’ll find Bar Shake really shines. As Kinugawa says, he wants to really make this an authentic Japanese-style bar. “It’s very focused on quality in terms of drinks and service.”

Gin fans will be delighted to know that Kinugawa stocks several craft gin bottles from Japan, hand-carried by himself. Other than that, the bar focuses on whisky-based cocktails and fresh fruits sake. “I don’t use store-bought juice. Instead, I utilise local fruits and squeeze them myself using a muslin cloth from Japan,” he explains.

It’s not every day that you get to try a local-fruit-infused sake, so we recommend you try out what’s currently in season. Previously, Kinugawa made mangosteen sake among many others. During our visit, we had the chance to try langsat sake, which was actually concocted out of coincidence. Not a native to Malaysia, Kinugawa mistook the longan fruit with langsat — thus his original plan to have longan sake did not come to fruition. But it was a lucky chance, as the langsat sake turned out even better than expected. The sour yet slightly herbaceous note to the local fruit melded well with the sake, giving off a refreshing taste to the liquor. In fact, the taste could even be likened to a less harsh version of tuak.

Later on, we tried the Summer Bloody Mary, Bar Shake’s version of the classic hangover cure. We were pleasantly surprised to find that the usually thick and red cocktail was instead almost clear in terms of its consistency. This was thanks to Kinugawa slowly cooking the tomato, basil, sugar, and salt until its red colour dissipates. You don’t have to have a hangover to enjoy this savoury cocktail, though. It’s a great change from the usual sweet or bitter cocktails with its tomato and basil nuances. It’s almost like drinking a hearty broth, except that it’s alcoholic.

If you like a bit of theatrics to go with your cocktail, then the Smoky Martini certainly warrants a try. It’s almost like your regular dirty martini, except that Kinugawa smokes the cocktail with cherry wood for a full 30 seconds. The smoked nuances apparently pair well with the botanical flavours of the gin, and we’re inclined to agree. It’s worth noting that Bar Shake also has several other types of martinis to try, with the Truffled Martini being perfect if you feel like treating yourself — made with Kinugawa’s own house-made truffle-infused gin.

To truly understand the art of Japanese bartending is to experience it for one’s self. Don’t expect the bartender to engage you in frivolous conversation — the more silent they are, the better the guests are able to appreciate the entire mixology experience. Similarly, Bar Shake takes pride in its elegant and subtle quality of bartending, with impeccable drinks to match. Pay them a visit and you’ll be well taken care of by Kinugawa.

the bar kinugawa sushi ryu Bar shake bar shake kl bar shake platinum park bar shake sushi ryu platinum park kl sam kinugawa osamu kinugawa the bar empire damansara japanese bartending japanese bar kl japanese bar in kl truffle martini clear bloody mary
PohNee Chin
Editor, Kuala Lumpur
Poh Nee is the editor and writes about travel and drinks. When she's not living out her holiday dreams via Google Earth and sipping on an Old Fashioned down at the local bars, you can find her snug at home bingeing on Netflix and mystery fiction.
Travel Drinks
Sign up for our newsletters to have the latest stories delivered straight to your inbox every week.

What is the difference between sparkling wine and champagne?

What is an ‘internal shower,’ the ‘miracle’ drink that’s going viral?