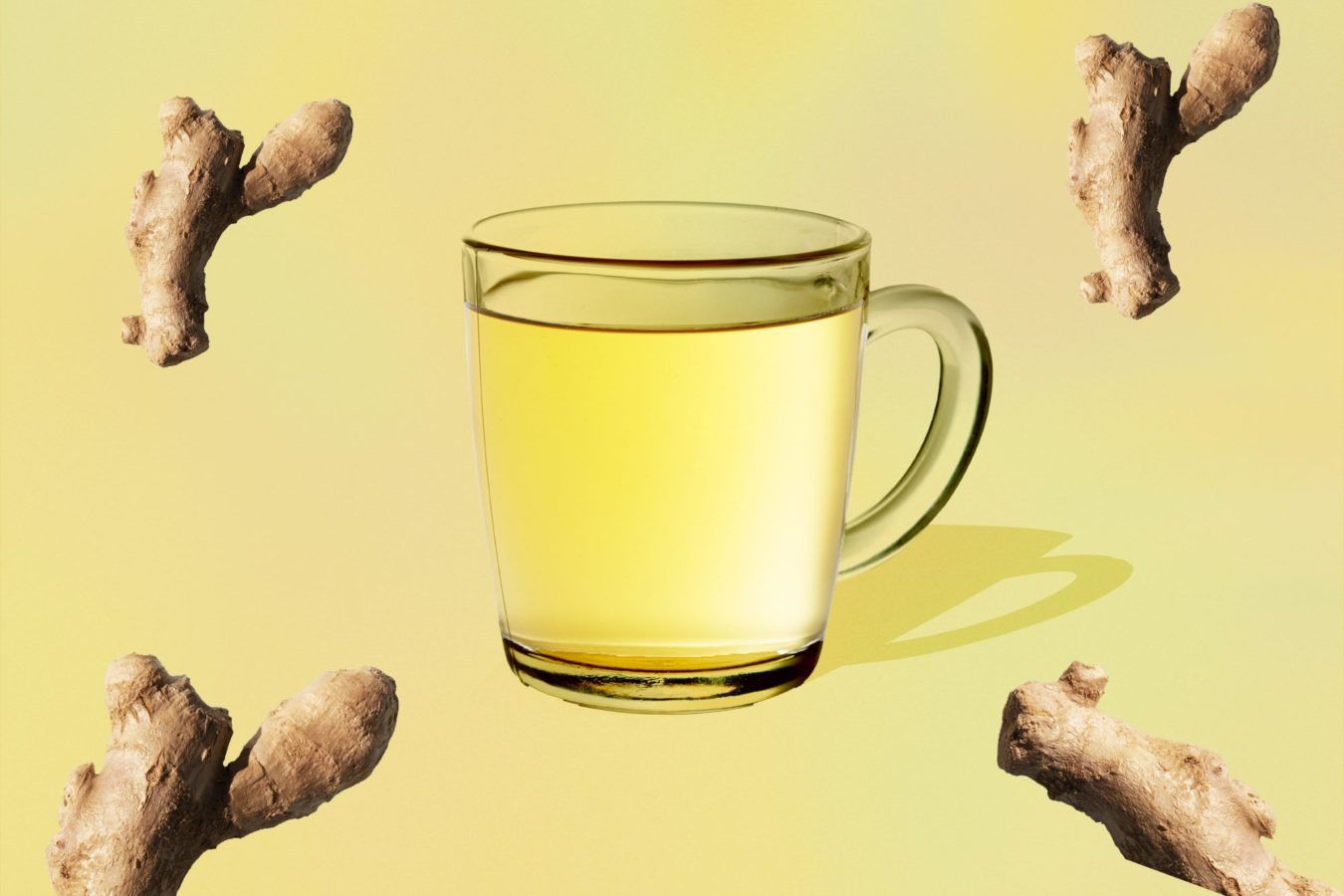 Ginger tea benefits that’ll convince you to brew a pot

If you’re looking to spice up your drink game, it might be time to try ginger tea. It’s a bit sweet, somewhat peppery, and super nutritious. After all, the drink is teeming with good-for-you nutrients that support several areas of health, from brain function to blood pressure. Ahead, find all the answers to the question, “is ginger tea good for you?” — along with tasty ways to enjoy it at home.

What is ginger tea?

First, a bit about ginger, also known as ginger root. Ginger is the root of Zingiber officinale, a tropical plant that’s related to turmeric and cardamom, according to an article from the National Center for Biotechnology Information (NCBI). Ginger has been used as a food and spice for thousands of years, according to North Carolina State University. Ginger root is also native to Asia (think: India, Japan, China), according to the National Center for Complementary and Integrative Health.

Ginger tea in particular is a caffeine-free drink made by steeping ginger in water. This infuses the water with ginger flavour, which is wonderfully spicy and pungent. Aside from the taste, this also enriches the water with ginger’s beneficial compounds, according to Isa Kujawski, MPH, RDN, registered dietitian and founder of Mea Nutrition. The result? A highly nutritious beverage that’s delicious to boot.

A post shared by Pukka Herbs US 🇺🇸 (@pukkaherbsus)

Ginger (and by extension, ginger tea) is packed with essential nutrients, including (but not limited to!) potassium, magnesium, copper, vitamin C, and vitamin B6, according to NCBI. The earthy ingredient is also chock-full of polyphenols, aka phenolic compounds, which are potent antioxidants that help stave off chronic disease. In ginger, the main polyphenols are gingerols, shogaols, and paradols, according to a 2019 scientific review in the journal Foods. In fact, these compounds are responsible for many ginger health benefits, as you’ll soon see below.

Thanks to its impressive roster of nutrients, ginger tea is one of the healthiest beverages you can drink. Here are all the ginger tea benefits worth noting, according to research and dietitians.

ICYMI above, ginger tea is rich in antioxidants including gingerols, shogaols, and paradols. These substances help combat oxidative stress, thus reducing the risk of chronic disease. Here’s the lowdown: Things such as environmental pollutants, UV radiation, and dietary choices can increase the body’s production of free radicals (read: unstable molecules), which, in excess, can damage cells and cause oxidative stress. This, in turn, can potentially lead to chronic conditions such as heart disease and cancer. But antioxidants, such as those in ginger tea, “work to stabilise these free radicals, [thus] limiting their damaging potential to the body,” says Kujawski.

Feeling woozy? Try sipping ginger tea. The beverage can help relieve nauseous feelings, and it’s all thanks to — you guessed it — the antioxidants, namely gingerols and shogaols. These substances likely work by “stimulating gastric motility, or the muscle contractions that facilitate digestion,” explains Kujawski. “This makes sense, as nausea [is] often associated with slow gastric motility.” As a bonus, ginger also helps quell intestinal cramping, dyspepsia (indigestion), bloating, and gas, according to a scientific review in Food Science & Nutrition. This may be useful if you’re experiencing these symptoms along with nausea.

Ginger can hinder the activity of the angiotensin-converting enzyme, or ACE, according to a scientific review in Frontiers in Pharmacology. This is key because ACE turns a substance called angiotensin I into angiotensin II, which narrows blood vessels and increases blood pressure, according to a 2019 review. Normally, the body produces ACE to regulate blood pressure, but a diet high in saturated fat can lead to excess levels and therefore, high BP. Drinking ginger tea may help inhibit ACE activity, thus reducing angiotension II and its undesirable effect on blood pressure. (

Chronic inflammation can manifest as pain, including myalgia (muscle pain) and arthralgia (joint pain), according to NCBI. However, the anti-inflammatory effects of ginger could theoretically help ease the pain. Ginger polyphenols reduce levels of inflammatory cytokines, thereby quelling inflammation in the body, as Kujawski mentioned earlier. A scientific review of more than 20 studies also found that ginger may relieve pain due to various causes — including menstrual cramps, osteoarthritis, and migraines — by reducing inflammation and inhibiting prostaglandins, compounds involved in pain. However, the review also notes that while using ginger for pain relief shows promise, “more studies are needed to create a consensus about the dosage of ginger for long-term therapy.”

Simply put: Ginger is “generally recognised as safe,” according to the Food and Drug Administration (FDA). But despite its range of health benefits, ginger (and, thus, ginger tea) isn’t for everyone. You should avoid ginger tea if you have a blood clotting disorder since ginger can thin the blood and promote blood circulation, says Kujawski. “In the same vein, individuals who are [taking] medications such as anticoagulants [for heart conditions] should consult their doctor before combining these medications with ginger tea,” explains Kujawski. That’s because anticoagulants also reduce the blood’s ability to clot — and the blood-thinning effect of ginger will further increase the risk of excess bleeding.

Similarly, Kujawski suggests using caution if you take beta-blockers for high blood pressure. Since both beta-blockers and ginger can reduce blood pressure, taking them together increases the risk of hypotension or low blood pressure. This may limit blood flow to your vital organs (think: brain and heart), causing symptoms such as dizziness, fainting, and weakness, according to the National Library of Medicine.

Ginger isn’t a known allergen. However, consuming too much ginger or ginger tea can cause unpleasant side effects such as stomach upset, diarrhoea, and heartburn says Kujawski. In some cases, its spicy flavour can also irritate the throat and mouth, according to the National Institutes of Health. “Individuals should avoid consuming ginger tea at doses in excess of 5 grams per day, which equates to four to five tea bags since one tea contains one or more grams of ginger,” says Kujawski.

How to use ginger tea

If you’d like to try ginger tea, you’ve got several options. One method is to use dried ginger, which you can find at your local tea shop or supermarket — just be sure to opt for products without any additives and check the expiration date to make sure you’re brewing the freshest tea possible, says Kujawski. Dried ginger is available as a loose-leaf tea or as teabags. You can also find dried ginger in tea blends which includes a combo of dried ginger, green tea leaves, pineapple, and marigold flowers. Such blends often combine ingredients with complementary flavours, making them a delicious alternative to straight ginger tea. In either case, dried ginger is meant to be steeped in hot water, just like you would with other types of tea bags or loose-leaf tea.

Alternatively, you can make ginger tea from scratch using fresh ginger, according to Kujawski, who recommends choosing a “ginger root that appears firm, smooth, and shiny,” she says. You can usually find ginger in the produce aisle next to the onions, garlic, etc. At home, wash the ginger and remove any dirt and debris. Feel free to peel the ginger first, if you’d like — but that step’s not necessary, according to the University of Minnesota Extension. Next, slice the ginger into a small chunk (about 1-inch wide), says Kujawski. From there, steep the chunk in one cup of hot water, or simmer the ginger in the water in a pan over medium heat. The tea will be ready in about five minutes, but you can let the ginger steep or simmer longer for a stronger and spicier drink.

Ginger tea — whether made with dried or fresh ginger — can be enjoyed as is. But if you’re looking to switch up your next cup o’ tea, try these ideas:

Drink it cold. If iced tea is more your style, you can turn ginger tea into a cold concoction. Simply let the tea cool, then add ice cubes. You can even freeze extra ginger tea in an ice cube tray, then use the cubes to chill your next cup instead of regular ice cubes that can water down your beverage.

Mix in sweetener. For even more flavour, consider adding a sweetener (think: maple syrup or honey) to ginger tea. Try this recipe for ginger and honey iced tea from Real Simple for a refreshingly sweet and spicy beverage.

Health Ginger Tea Health drinks
Kirsten Nunez
Health
Sign up for our newsletters to have the latest stories delivered straight to your inbox every week.

World Cocktail Day: 5 Asian-inspired cocktails for your next house party

What is Jun, the tastier probiotic alternative to kombucha?

Is your oat milk being impacted by climate change?