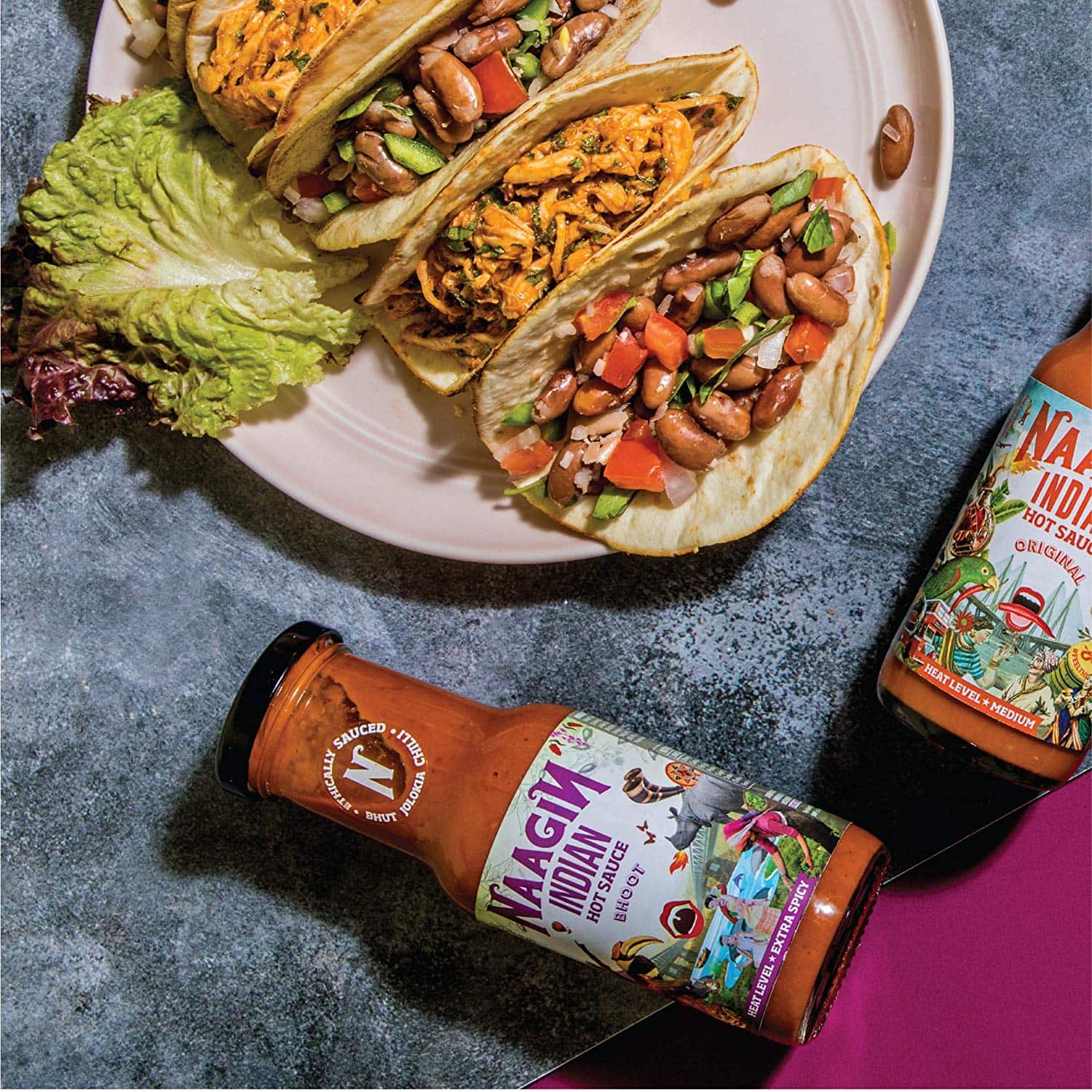 The first image that comes to my mind is that of an angry but glamorous Sridevi wearing blue contact lens and hissing, with her hands outstretched. If you are an ’80s kid, this is how you envision ‘Naagin’. In 2019, that image is replaced by a hot sauce bottle – one with interesting graphics and a flavour that could make you sweat. I’m talking about Naagin sauce, a new entrant into the Indian sauce market. With a punchy name, a personality that’s fiery (hello Bhut Jolokia chilli), and a social media strategy that’s sexy AF, this is a millennial homegrown label is making all the right noises.

“The name itself is intriguing and when I saw there’s potential for it, I immediately bought the url two years ago,” says Mikhel Rajani, co-founder of Naagin and owner of Mumbai’s popular pizza place, Francesco’s. “I knew one thing for sure – India, the home of spicy fare needed to make its own hot sauce. Someone needs to represent the best of Indian flavours and spice culture.”

When it comes to hot sauces in India, apart from the staple Maggi, there are few artisanal labels and international names. The oldest homegrown one, Pico, also has the fiery Bhut Jolokia but is yet to gain momentum. Then there’s the punchy Sprig, with new-age-y packaging. The usual ones that crowd the shelves include Ene by North East, and Veeba, which also has a Jolokia version. Popular international brands in India are few: There’s El Diablo and the popular Sriracha. Given this, Rajani points out that there was a big space left to explore – after all, India is home to some of the spiciest chillies. “We wanted to champion every chilli available in India from every region,” he says. So along with foodie friends Arjun Rastogi, who co-founded the digital agency Skarma, and Kshitij Neelakantan, co-founder at Double Think Media, Rajani established the sauce brand.

Naagin’s first two sauces pay homage to two distinct chillis – the original which has Sankeshwari chillies and the special, aptly called Bhoot, features India’s hottest chilli, the Bhut Jolokia. The sauces recently started retailing – with social media games and fun packaging to boot – and having a passion for hot sauces, I picked them up immediately. Let’s talk about the variants. The Original sauce is a milder one but gives you a tomato-punch with a garlicky tinge at first bite. It then settles down beautifully, with an almost sour taste. A bit on the flavourful side, it can be used in many ways. “It’s a well-rounded chilli, not too spicy and not too bland – just right,” adds Rajani.

The second one is not for the faint-hearted. As someone who grew up on Andhra food with exposure to plenty of Guntur chillies, I consider myself as having a high tolerance for spice. Heck, I walk into restaurants and ask for their heaviest peppers. But one bite of this Bhut Jolokia and my mouth was on fire. It’s punchy,  dramatic, and needless to say, a tiny drop goes a long way. It’s aptly named ‘Bhoot’. On a whim, I added some to pasta – and it worked. “I am constantly surprised by the number of ways people are using these sauces in their cuisine – some even use them in their chicken curries,” Rajani adds happily. People have used it in hummus, as a Maggi noodle staple, and even in the masala made for dosas.

Food & Drink
In it’s 167th Edition now, the Krug Grande Cuvée is back in India with a bang

Apart from the sauces, what makes Naagin click is the brand’s digital pull. I’m fairly sure it went viral based on it’s Naagin sauce challenges – they make weird concoctions with the sauces and make millennials test them. Who doesn’t get enticed by these? Then, there is the cool packaging – graphics of Koli women and Mumbai BEST Bus on the original sauce, and the beauty of Assam’s wildlife alongside other choice emblems from the North East on the Bhoot bottle. The bigger wins are that the company uses real ingredients, sourced ethically, uses no artificial flavours, and is 100 percent vegan (zero corn starch). All this handsomely priced at Rs 225 per bottle. The brand’s future plans include working with more chillis from various regions in the country – so expect some fireworks in your belly soon.

You can buy Naagin sauces here.