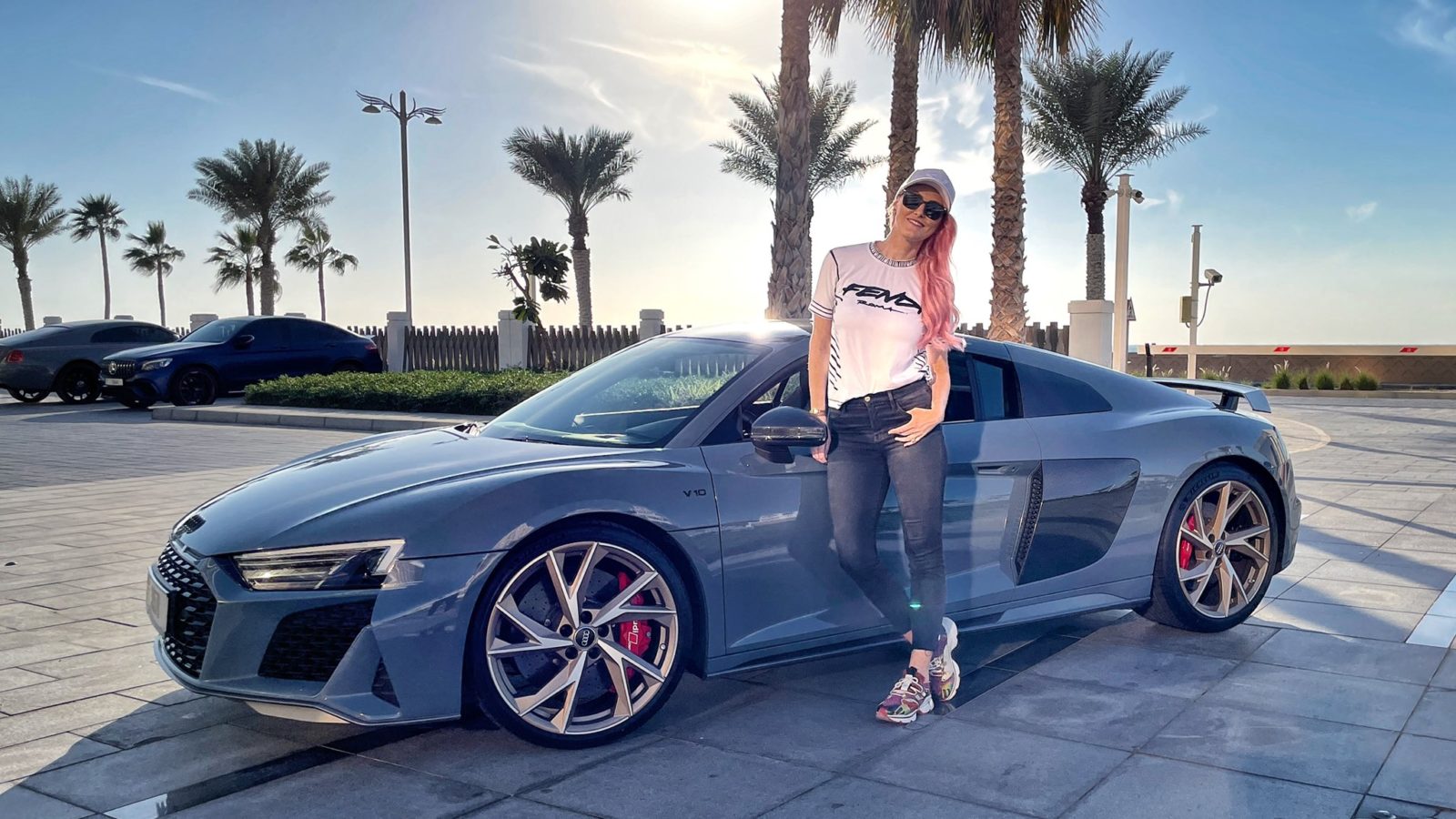 Gear
8 most exotic automobiles Alex, the Supercar Blondie flexed on her Instagram in 2021
Share this article
Next article

From the rarest Bugattis of Molsheim to the most opulent Rolls-Royces in history, Supercar Blondie has seen it all. Here’s the very best of 2021 so far.

Three years ago, Alexandra Mary Hirschi, an Australian hustler, quit her day job to hunt down, experience, and film the world of luxury motoring. Today at 35, she’s based in Dubai with millions of followers and is living a life that most auto-enthusiasts would dream of. She believes that cars aren’t just about four-wheeled transportation, but are machines to be enjoyed. Knee-deep in the world of V12s, butterfly doors, and multi-million dollar hypercars of tomorrow, Hirschi was listed in the top 30 most influential Arab women by Arabian Business last year.

Today, we cruise through some of the wildest automotive finds of Alexandra, the Supercar Blondie, in 2021. 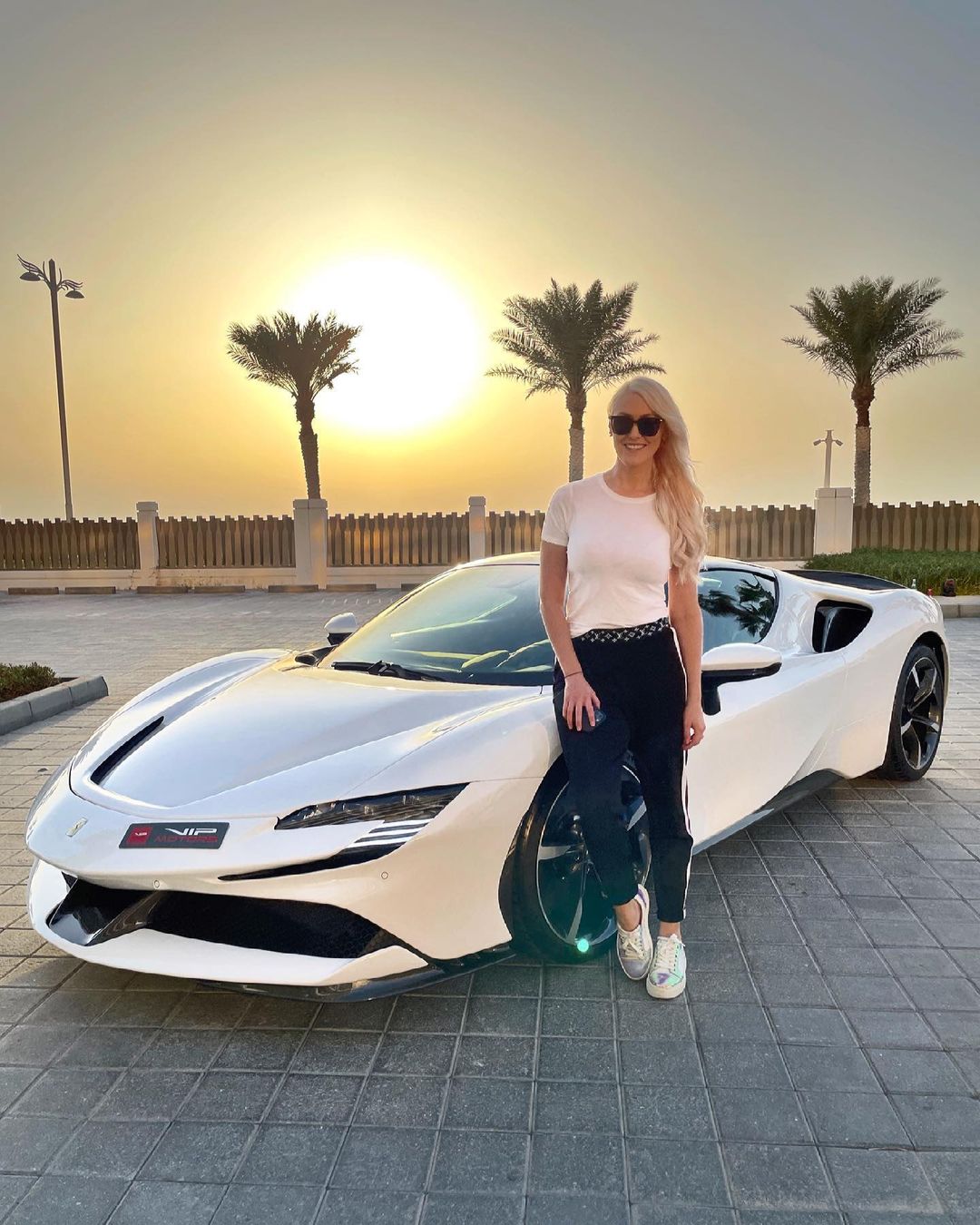 We’ve always known that cars that come with the badge of the Prancing Horse of Italy are real speedsters. And what Alex is standing next to in the picture above is the speediest of them all. Ferrari stated that the SF90 Stradale is capable of accelerating from a standstill to 100 km/hour in a mere 2.5 seconds and to 200 km/hour in 6.7 seconds. The car tops out at a speed of 340-km/hour, all thanks to its hybrid setting. You’ll find a hefty 4-litre twin-turbo Ferrari V8 and three electric motors that together, produce nearly a 1000-horsepower. A true wild stallion in our opinion. 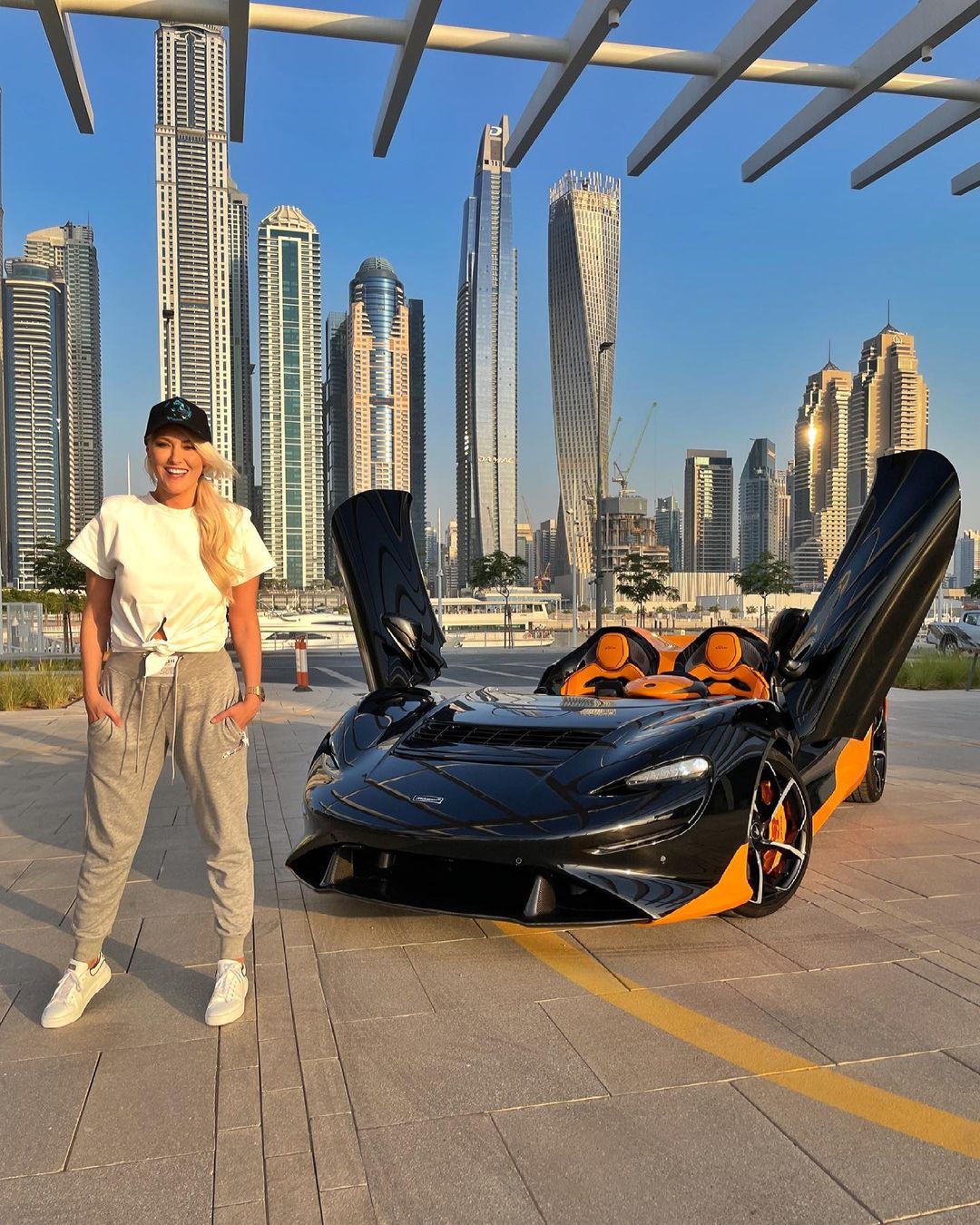 This probably might be the first time you will see a roadster without a windshield. McLaren has always prioritised performance and lightweight design in their modern works as well as in building street-legal super-sports cars.  Even though the Elva is much lighter and faster than the Senna, it promises the purest driving experience of any new McLaren. To add to its design attributes, there’s a prominent air vent on Elva’s nose. It’s actually a newly introduced McLaren concept called Active Air Management System, which sucks up the airflow instead of allowing it to reach the open cabin. 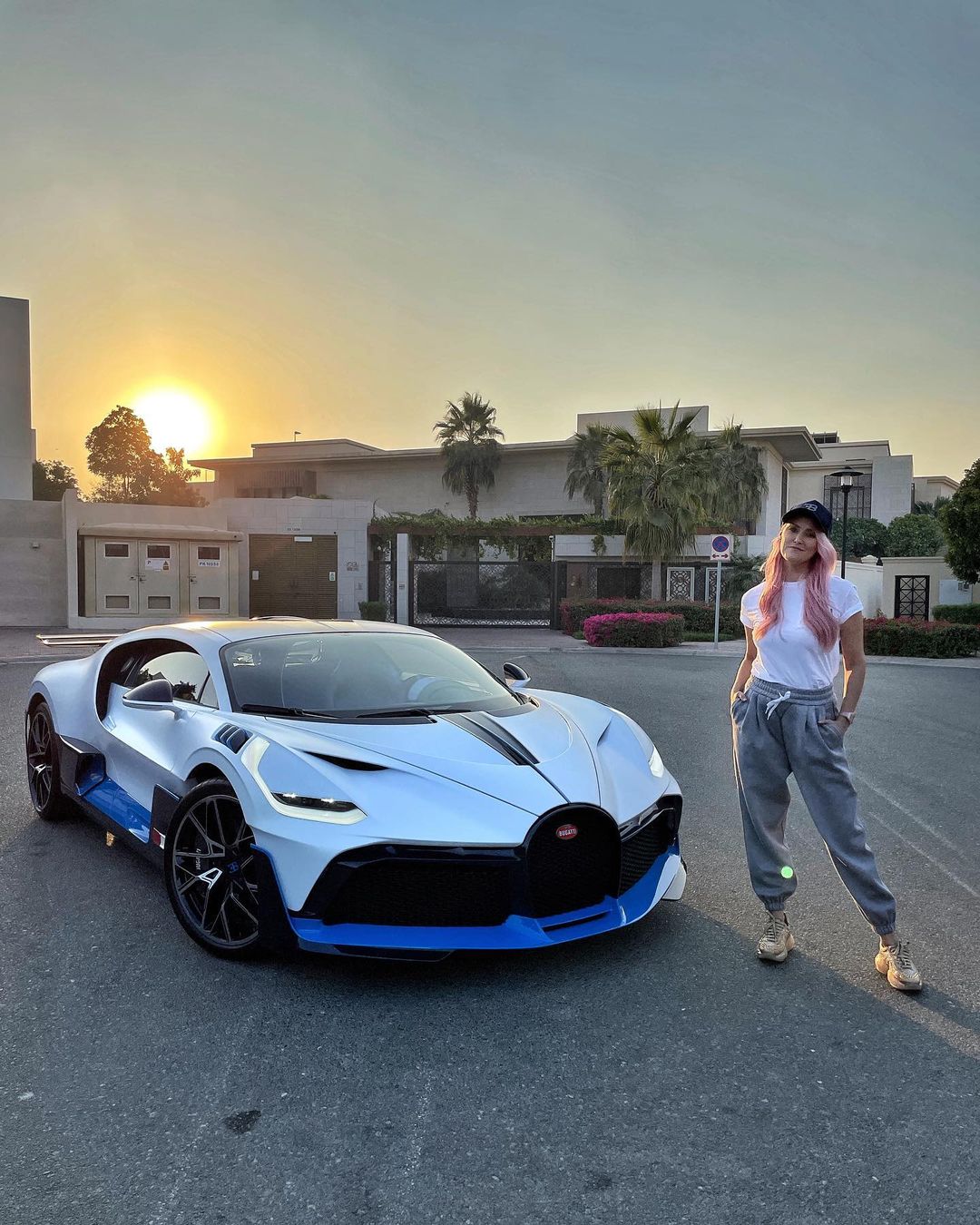 What you’re looking at costs a hefty $8 million, and there’s only 40 of these in the world. What’s interesting is that this is one of those cars that money simply cannot buy. Alex explained that in order to buy this car, you need to already own the Chiron, which in itself costs $3.2 million. Moving on to the power department, the car holds an 8-litre W16 monster that churns out 1,479-horsepower at 6,000-rpm and a torque of 1,180 lb-ft. The Divo is capable of zooming at 380-km/hour. 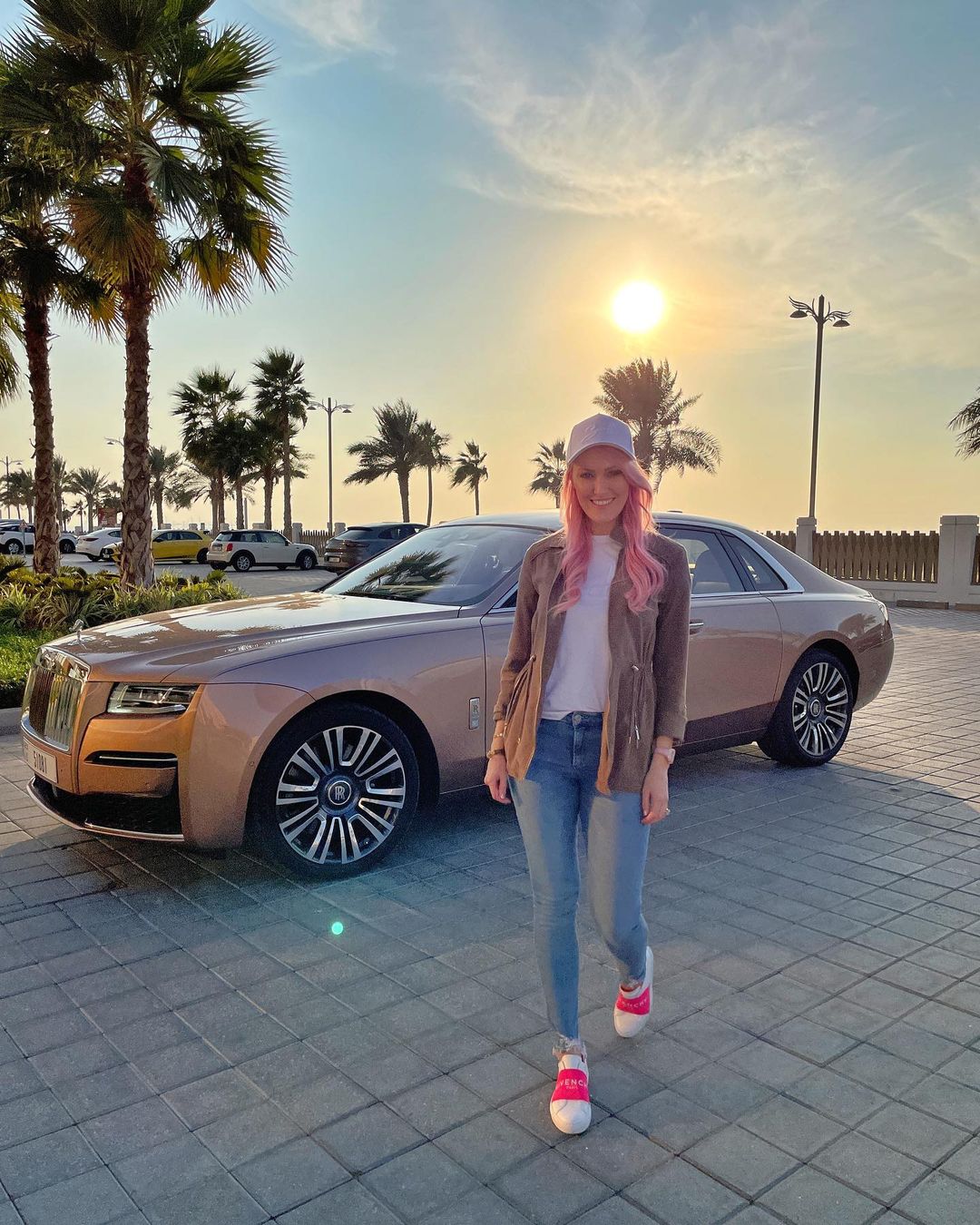 If you ask me which luxury car I’m most excited for in 2021, we’re pretty sure the Supercar Blondie and I would have the very same answer: The Rolls-Royce Ghost in its third generation. For the record, this luxury chariot boasts the quietest luxury cabin in the business. The men at Sussex have mastered the art of aural engineering to a point where it’s too quiet and almost disorienting. Apart from that, the Ghost has always been a driver’s car. It’s the car you take out on a Sunday for a spin, not in the backseat but behind the wheel. 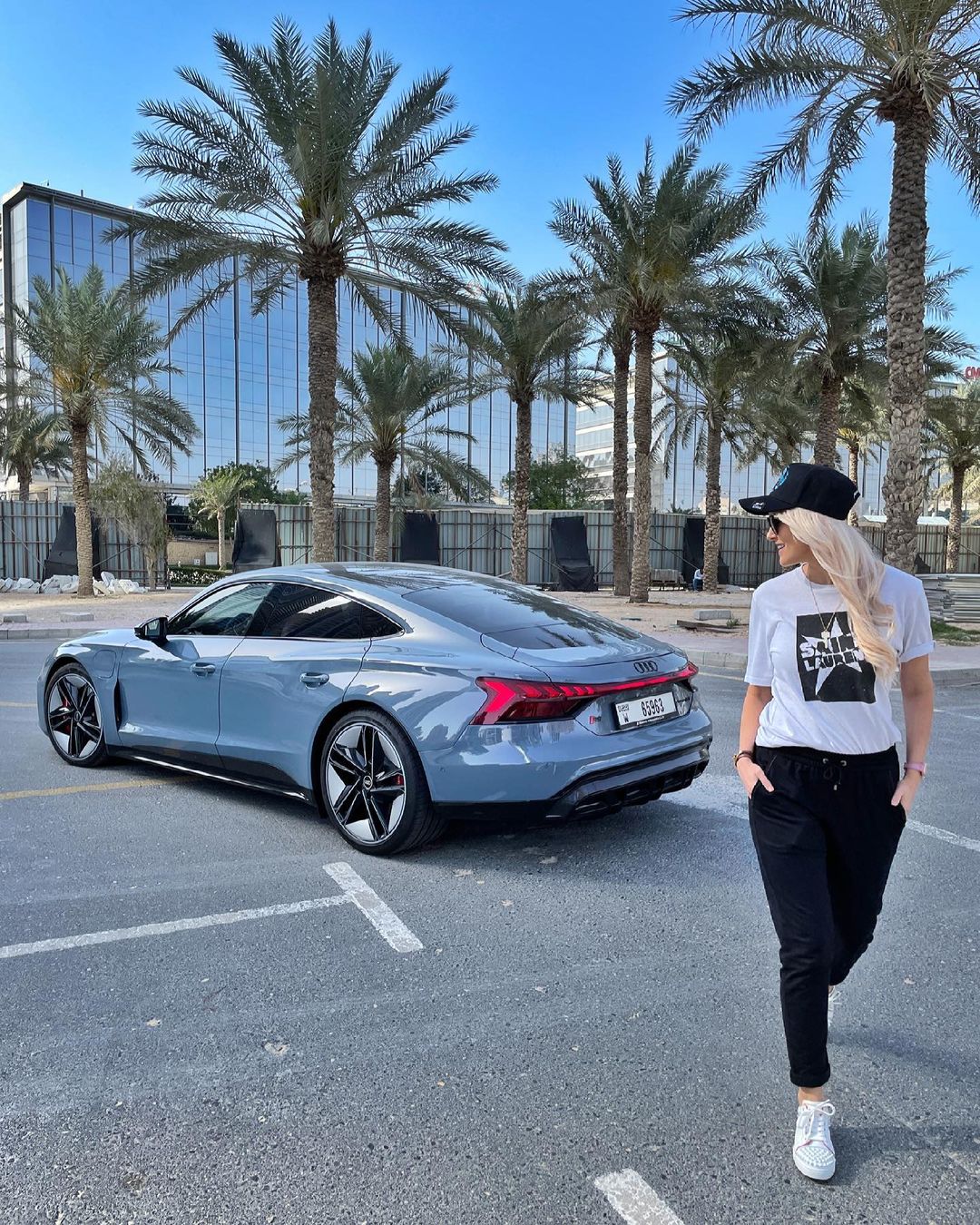 The speedster of the future, the Audi E-Tron GT is truly a spectacle of electric power, futuristic design, and on-road dominance. While the standard E-Tron is an SUV, this one focuses on the sporty side of things. Alex stated that the torque on this electric beast is ‘head slamming’ — well, it does churn out 640-horsepower so that wouldn’t be much of a surprise. More so, it comes with an Audi RS badge, so you know that always means serious business. 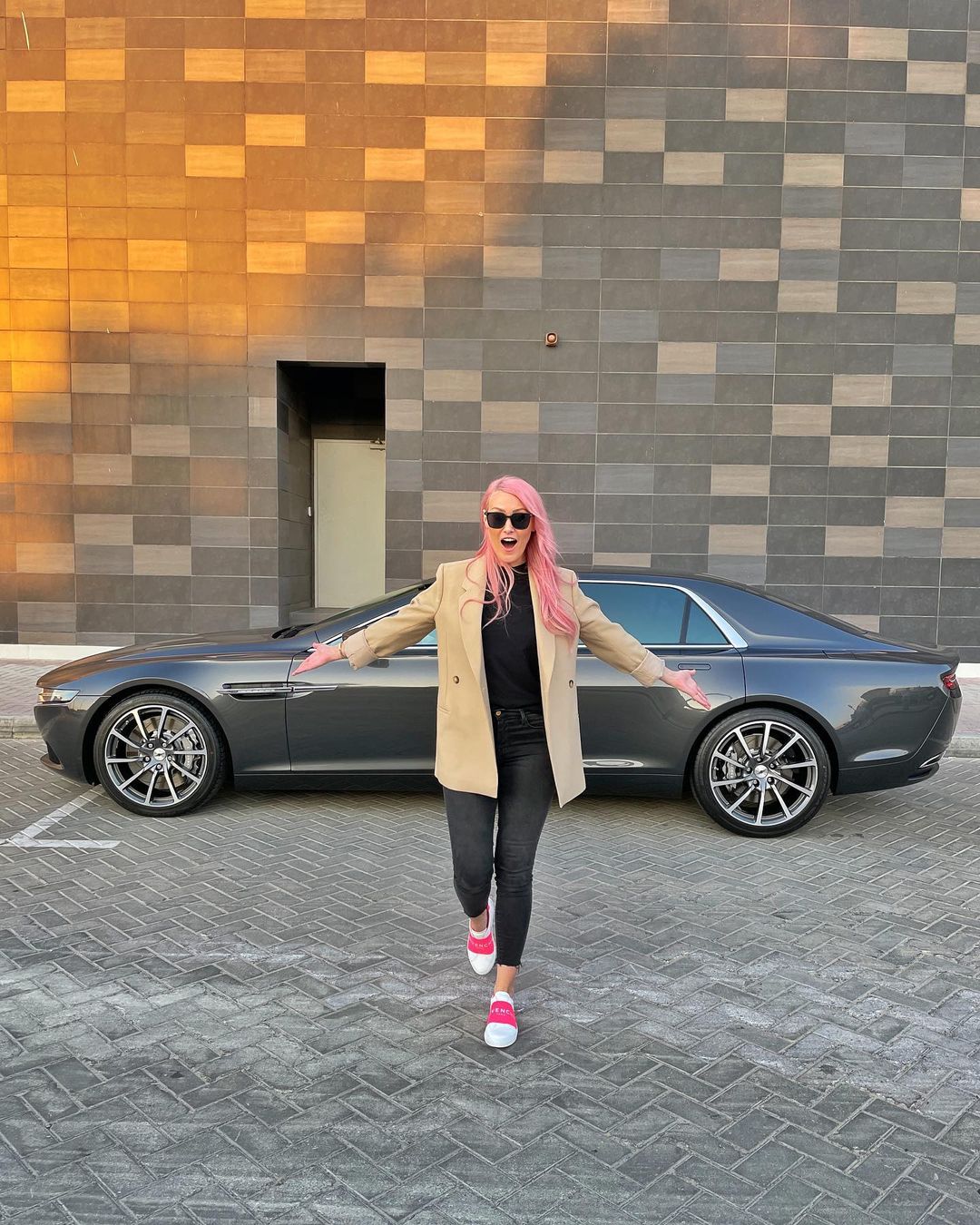 Behold, the world’s most expensive saloon. You must be expecting to see a Bentley or a Rolls-Royce, but it’s actually an Aston Martin-owned, Lagonda. Back in 2014 to 2016, when the car made its debut, it came with a price tag of a million American dollars. To put that into perspective, you can either buy two top-spec Rolls-Royce Phantoms or this super sedan. The word ‘Taraf’ translates to luxury in Arabic. The car was also based on the DB 9.

Earlier this year, she posted an Instagram Reel saying she purchased the new ARES Design 1 as her very own hypercar. For those wondering what separates a hypercar from a super-sportscar, well, it’s simply its purpose: Speed, pure adrenaline, and pushing the boundaries of on-road motoring. The S1 is powered by a reworked, naturally aspirated V-8 that produces up to 705-horsepower, some 200 horses more than the Corvette C8. It catapults from zero to 60 in just 2.7 seconds. Let’s end this list with two cars from the Supercar Blondie garage itself. On the left, a plush Rolls-Royce Wraith Black Badge and right, a slick McLaren 720S. It proves that Alex’s taste in luxury cars swings both ways: Luxurious and lightning-quick. While the Rolls was Alex’s first, she purchased the McLaren back in July of 2020. Tell us, if you had US$400,000, which one would you pick?