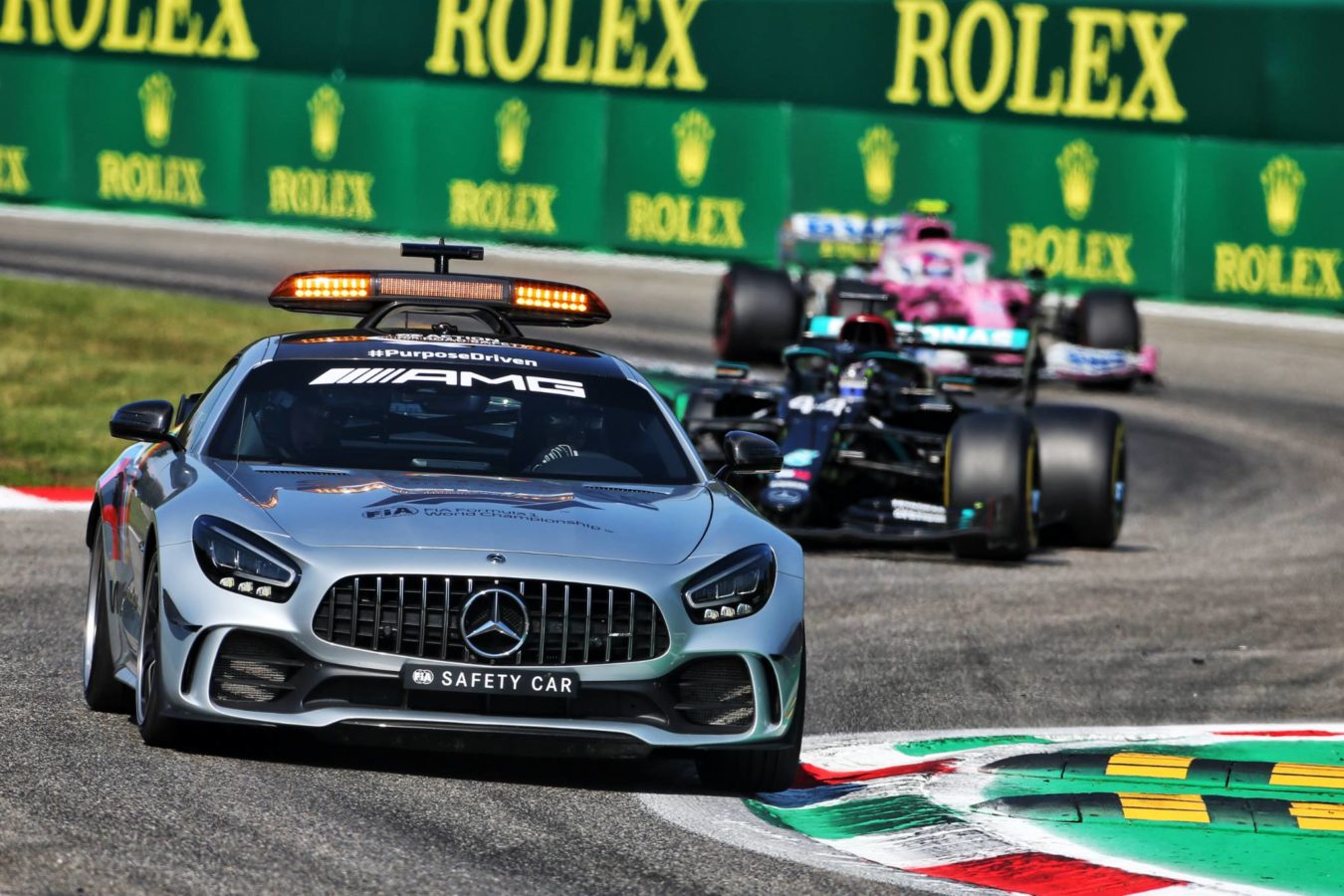 From the first 1973 Porsche 914 to the current Aston Martin Vantage, here’s a brief list of some of the most memorable F1 safety cars in history.

Formula 1 cars: 1000 plus-horsepower engines, open wheels, and roofless driver cockpits – Safety is critical. With millions of dollars pooled into one car, striving to push the limits of on-road physics and mechanical engineering, it’s all controlled by one steering wheel and the man behind it. Throughout the history of all forms of motorsport, on-track calamities have been a persistent threat and worry. And in these situations of damage, obstruction, or injury, a safety car swoops in to control the pace of the racecars until the track is clear. Safety cars aren’t exclusive to F1, we have a BMW M2 or M5 for Moto GP, McLaren 570S for British GT, and a BMW i8 for Formula E.

Considering the F1 fever today, we’re scrolling through the archives highlighting some of the most memorable F1 safety cars.

Historically, the first ‘safety car’ made its appearance in the 1911 Indianapolis 500 and it was a Stoddard-Dayton Model 11-A. In F1 books, it was a Porsche 914, however, this was interestingly an unofficial first appearance. After some terrible weather conditions that caused a few crashes, the 914 swooped in to pace things down. This was the first documented use of a safety car in F1 history.

A 911 as an F1 safety car, what a sight. We couldn’t fetch an official image of what it looked like with the ‘pace car’ badge, but this should give you a pretty decent idea. It made an appearance at the Circuit de Monaco in the year 1976. A brief run yet noteworthy.

Could there be a more glamorous F1 safety car for a Monaco GP? Definitely not. The Lamborghini Countach was the car of the 70s and 80s, and a statement of sinister speed, style, and a flagship of the wedge-car silhouette. Underneath that beautiful red body, rests a 3.9-liter V12 that could actually give the Formula One cars some good competition too.

This may look like your average nine-to-five city car but guess what? This was actually the first official F1 safety car. Making its debut at the 1993 Brazilian Grand Prix. Interestingly, after Ayrton Senna won that race, the Brazilian superfans rushed the track and surrounded his McLaren. It was this Fiat Tempra 16V that came to the rescue.

Carrying the wedge car torch into the 90s was the Lamborghini Diablo, equally fierce and stylish and perhaps one of our favorite F1 safety cars. This was the last Italian Raging Bull as a safety car, after which, the reign of Mercedes began. It used a 6.0-liter Lamborghini V12 that made 485-horsepower on track.

And finally, the Mercs roll in. Mercedes became the official F1 safety car in 1996 with this Mercedes-Benz C36 AMG. It was actually the performance-speced model of the C-Class that used a respectable 3.6-liter inline-six engine that churned out 280-horsepower. It was replaced by the Mercedes-Benz CLK 55 AMG the very next year.

I think it’s safe to say that the Mercedes-Benz AMG GT series was arguably one of the most prolific F1 safety cars of all time. Through the years, we’ve seen so many iterations of this model but if we scroll through the safety car design timeline, this is perhaps the first time things started looking ‘modern’. It was powered by a 4.0-liter twin-turbo V8 that churned out 510-horsepower.

After nearly 40 years of the safety car being in service, we finally come to this. Currently (since 2021), the Aston Martin Vantage is the official F1 safety car. The Vantage manages to look menacing yet subtle at the same time, more so, that hue of British racing green adds to its allure. Allowing it to keep up with the F1 cars is a 4.0-liter twin-turbo V8 that produces 535-horsepower.