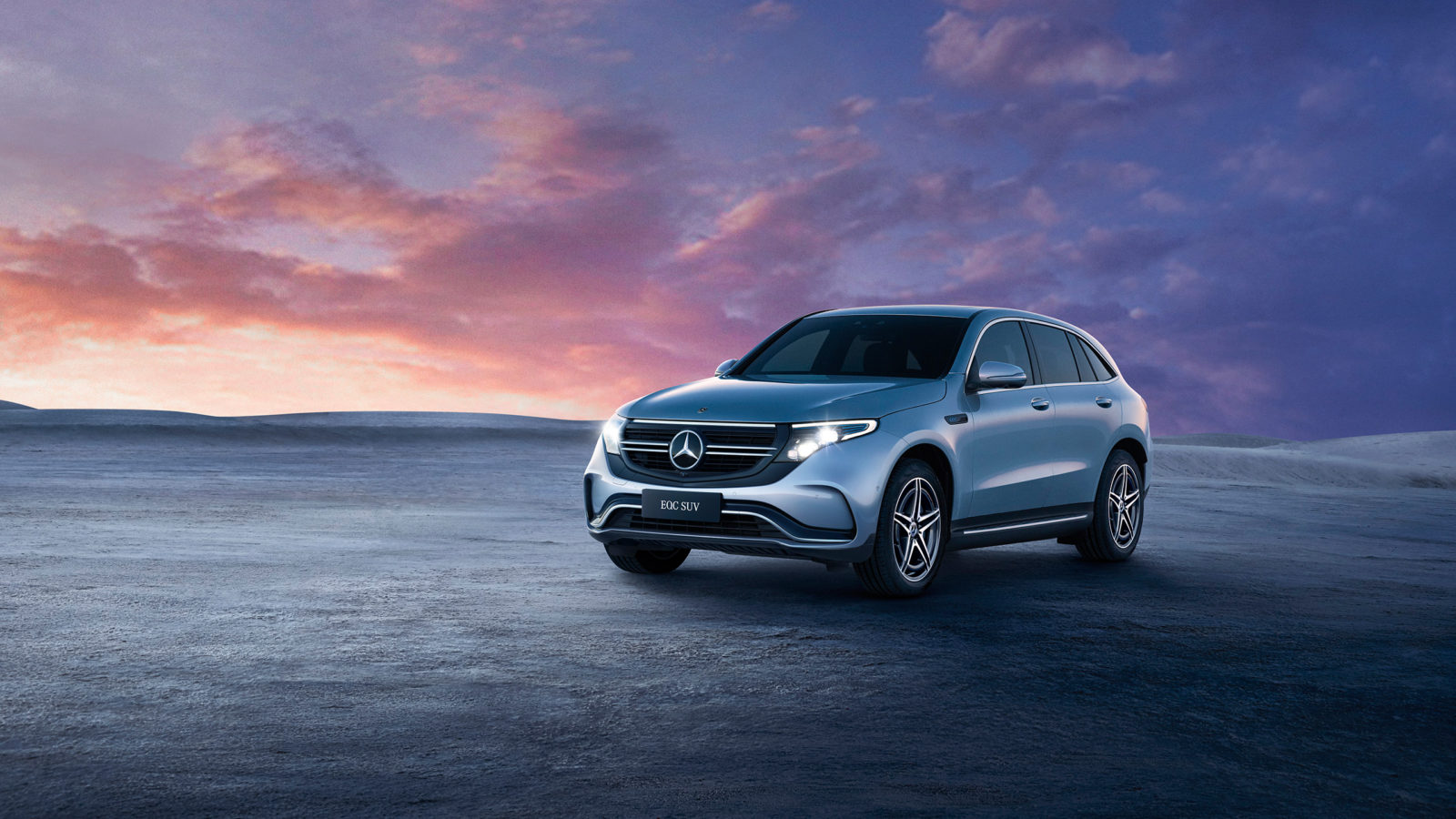 Review: Behind the wheel of India’s first luxury EV, the Mercedes-Benz EQC

Gear
Review: Behind the wheel of India’s first luxury EV, the Mercedes-Benz EQC
Share this article
Next article

Testing out India’s first luxury EV, the Mercedes-Benz EQC, we give you a first look at what it’s like to drive it in Mumbai.

While electric vehicles (EVs) have already begun to make a mark in the Indian market, albeit slowly, we had not yet seen a significant release from the major luxury players. That is till last week, when German carmaker, Mercedes-Benz, became the first ones in India to launch a luxury EV, the Mercedes-Benz EQC. This release is in keeping with the carmakers’ commitment towards sustainable mobility — it has pledged that by 2039, their entire fleet would be carbon neutral.

We were among the first few to check out this slick vehicle, with a decidedly reinterpreted aesthetic, on the roads of Mumbai, and here are some of our first impressions. 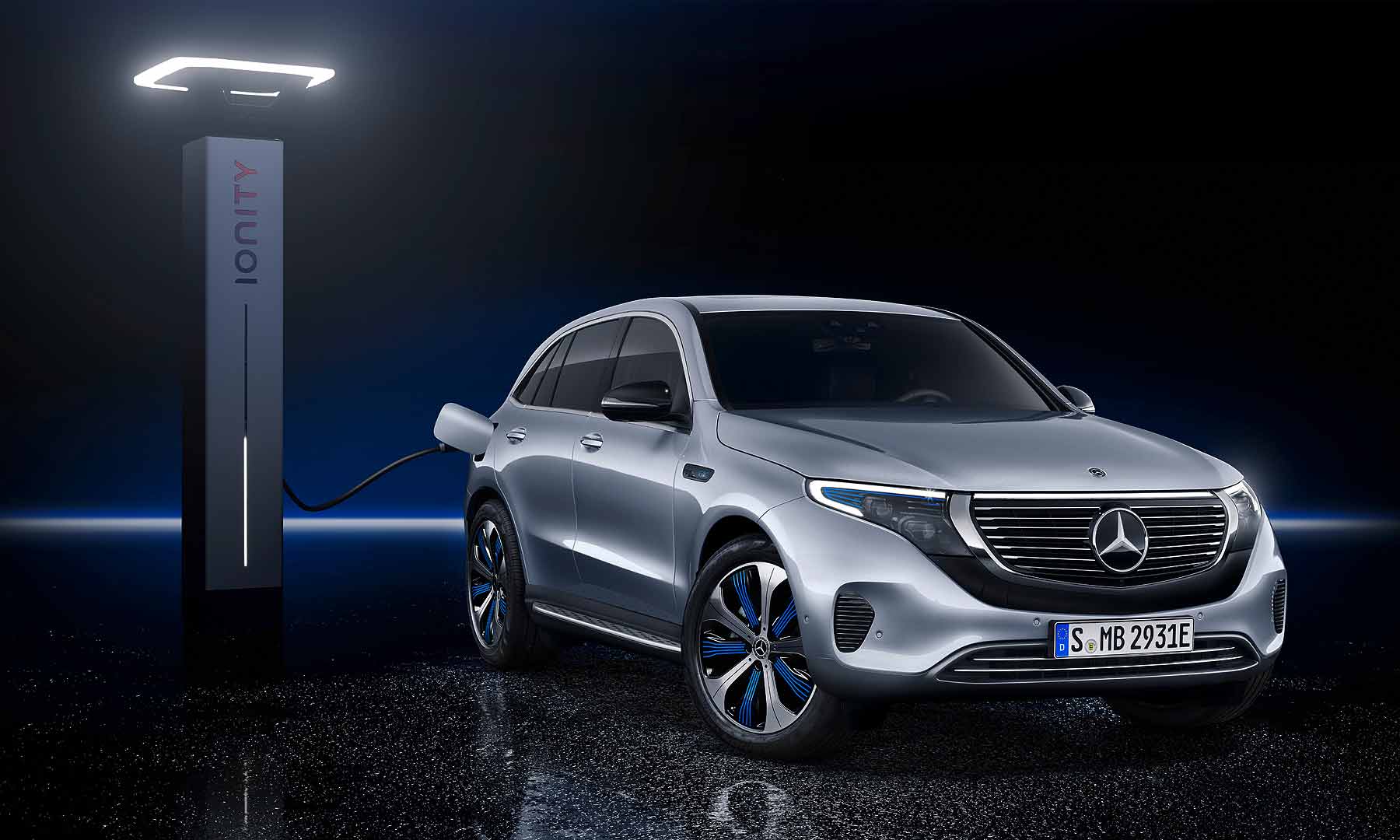 EQC is a very good looking car. Maintaining more or less the same proportions as the hugely popular GLC, in terms of looks, this car is a novelty of sorts from the German carmaker’s portfolio. The front of the car, for instance, has been redesigned to give it a standout look. The front end looks slick with the massive logo pasted on the black grille, complemented by the sharp lines of the LED lights.

I absolutely loved staring at the back of the car, as Mercedes seems to have infused it with a minimalist, almost modernist vibe. As I test drove the car, it did turn quite a few heads on the streets of Mumbai, with a lot of people complimenting the new look.

The EQC is powered by a massive flat lithium-ion battery that is placed under the floor of the car. The battery in itself weighs over 600 kgs. If you are under the impression that EVs don’t pack in the same punch as traditional ‘engined’ vehicles, think again. This EV is high on performance, boasting a maximum output of 408 hp, and promises a 0 to 100 km/hour sprint in an impressive 5.1 seconds.

One thing that struck me was just how powerful the car felt, with a slight tap on the accelerator pedal enough to push me back into my seat. It also comes with five drive modes to enhance performance depending on where you need to drive it. 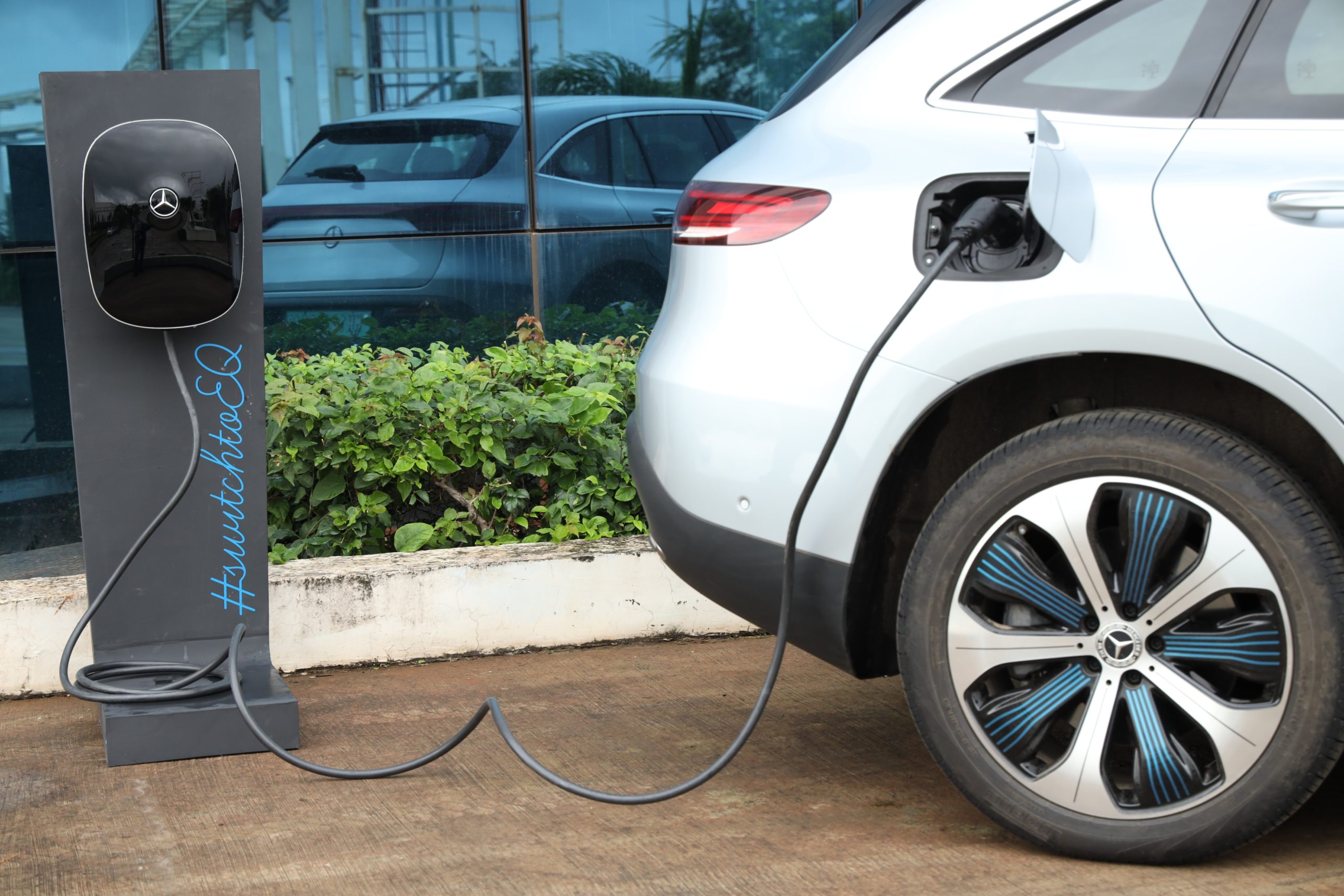 The most obvious — and inevitable — question on everyone’s minds is just how far you can drive this car on a full charge. The press brochure promises a range of over 400-km on a full charge, under optimal driving conditions. This number is, of course, variable. I test drove the vehicle on city roads and the dashboard indicator suggested just over 300-km on a 95 percent charge. You can do the math.

Gear
Drive down memory lane with these iconic Bollywood rides

With every EV comes the question: What are my charging options. There are three different options. The company provided wall box charger would take 10 hours to achieve a full charge, a DC fast charger promises to do just that in 90 minutes, while the slowest option is a standard electric wall outlet, which could take up to 20 hours to charge. 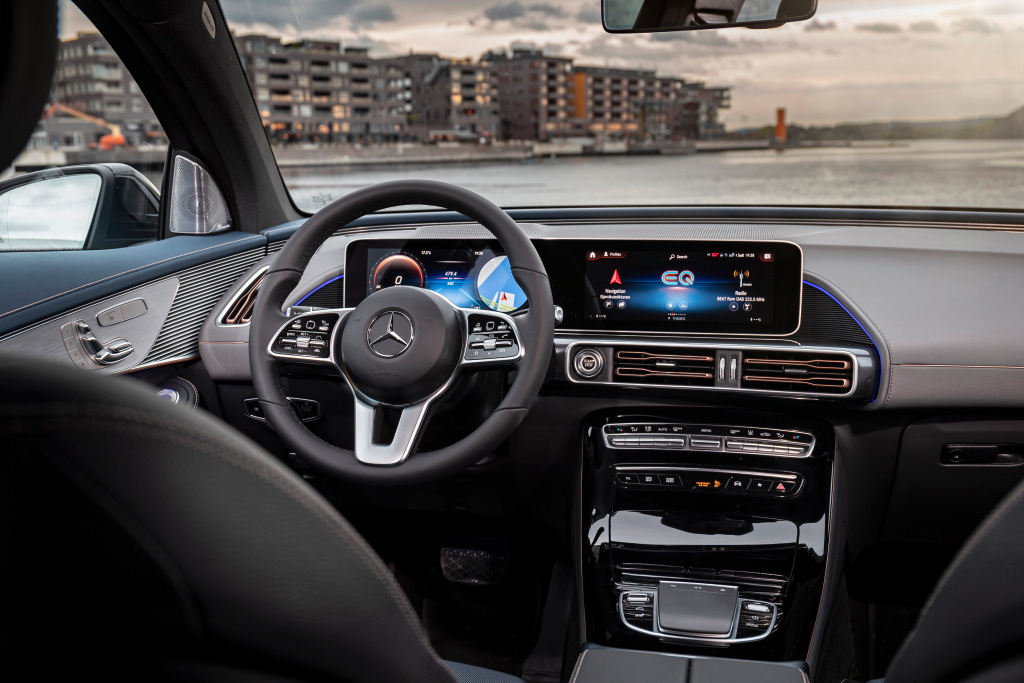 So it’s not only the outside of the EQC that is massively transformed. Once I got into the cabin, I could sense something entirely different, with a few old familiar design cues of Mercedes-Benz. The round AC vents have been replaced by angular ones, for instance. One of my favourite features is the massive flat screen for information and entertainment.

Interestingly enough, this was my first time trying the carmaker’s new MBUX (Mercedes-Benz User Experience) interface, the highlight of which was the ‘Hey Mercedes’ voice command option. I tested out the ‘Hey Mercedes’ feature to get directions, and it worked pretty seamlessly in terms of accent and voice recognition, as well as efficiency in charting my course. The MBUX can be controlled through the touchscreen, the trackpad on the central console, and the steering wheel.

Some of my favourite features in the MBUX interface included the menus for the nearest charging station as well as the different ‘ambience’ packages, which include, ambient lighting, seat massagers, and accompanying music for goals like ‘wellness’, ‘workout’, etc. 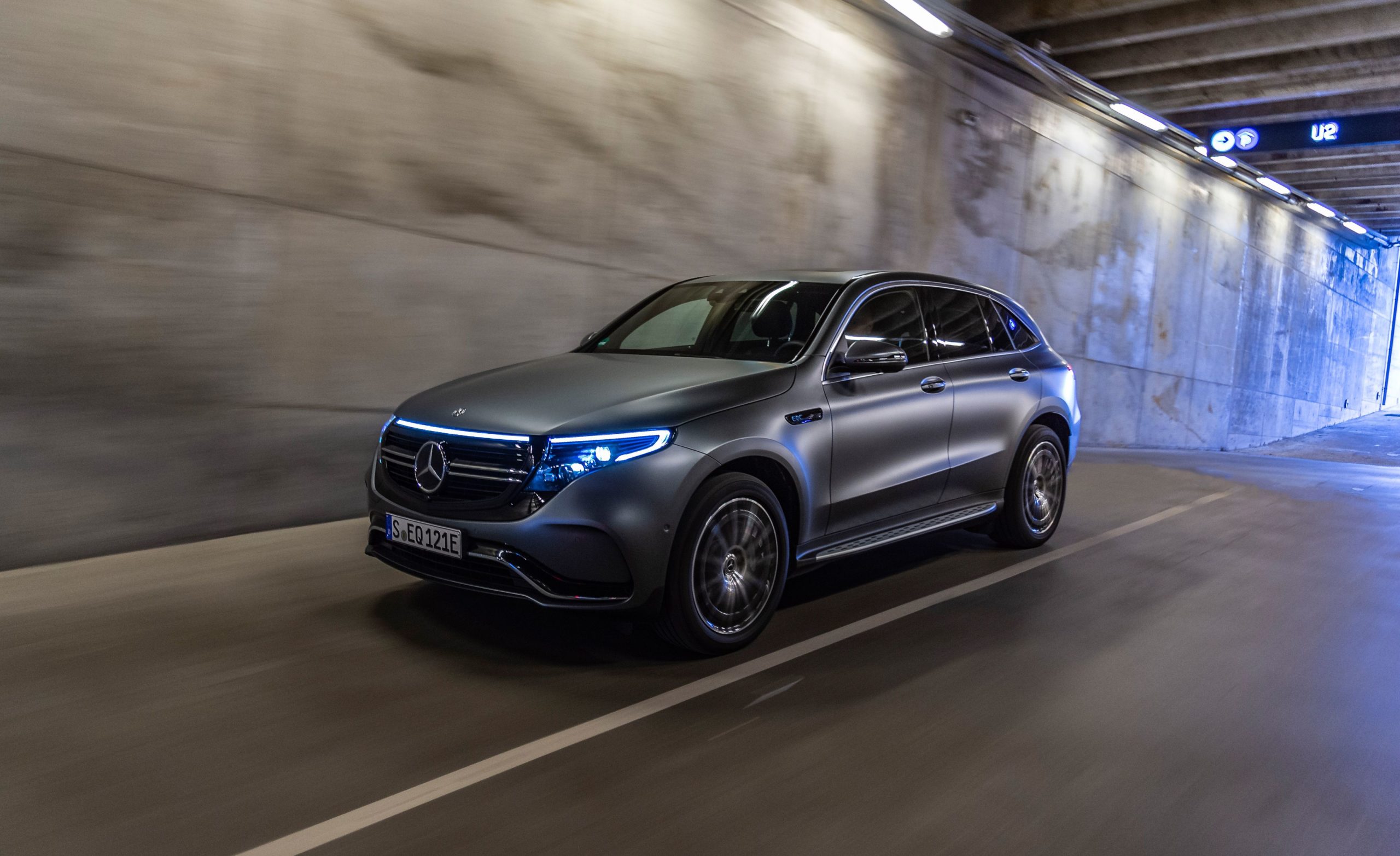 Benz fans will be happy to find some of the regular safety and security features in this model too. These include the seven airbags, Attention Assist System, Lane Keeping Assist and many more, which are standard Mercedes-Benz fare.

I was asked to download the Mercedes Me app, on my phone, which I synced with my car and this enabled me not only to carry out a key-less entry but also to pre-cool my car before actually entering the car. The app is certainly worth a mention and is ideal for discerning luxury consumers.

With luxury consumers becoming increasingly conscious of their carbon footprint and Indian drivers opening up to the idea of driving ‘electric’, the Mercedes-Benz EQC and its slick features and drive performance make the cut for me. I’m guessing that there will be takers and that this could be just the start of a massive luxury EV revolution.