Triumph Trident 660: Their most affordable power-cruiser is now in India

Gear
Triumph Trident 660: Their most affordable power-cruiser is now in India
Share this article
Next article

The Triumph Trident 660 makes its debut in India promising the flair and power of its elders but at a smaller price package. Here’s all about it.

A roadster, naked and under Rs 7 lakh, certainly new territory for Triumph. We’ve always seen the British outfit build bikes brawny and adventurous. This however, seems like a new breed, which is why it holds importance. Apart from being the most affordable ride on Triumph India’s roster, it’s also a brilliant admixture of middle-weight cruising, fancy performance and brilliant, city-friendly handling. Here’s all about what makes the Triumph Trident 660 great. One of the coolest deets about this bike is that it was designed in collaboration with Rodolfo Frascoli, the man behind the new Tiger 900. More so, Frascoli also played a role in designing the Triumph Speed Triple and the now-discontinued Tiger 1050. In terms of design, it simply looks like a slightly minimized version of the Speed Triple. The fuel tank bulges forward and compliments the round LED headlight to create a sportier look. But while the Trident might appear smaller, it seems bulkier and broad-shouldered. The attention to detail on the tank is also very impressive, two tones of grey and black detailing of Triumph’s logo paired with a thigh cap that breaks that contrast. Powering this handsome roadster, is a 660-cc inline three-cylinder engine which actually gets its architecture from the Triumph Daytona 675’s guzzler. The Trident will churn out 80-bhp at 10,250 rpm while delivering a peak torque output of 64-Nm at 6,250-rpm. More so, Triumph stated that about 90% of the torque is available through the rev range, interesting. This should make it a real power cruiser, despite the modest performance figures. If you’re feeling dynamic, the Trident 660 also offers ride-by-wire, two riding modes – road and rain along with ABS and traction control. 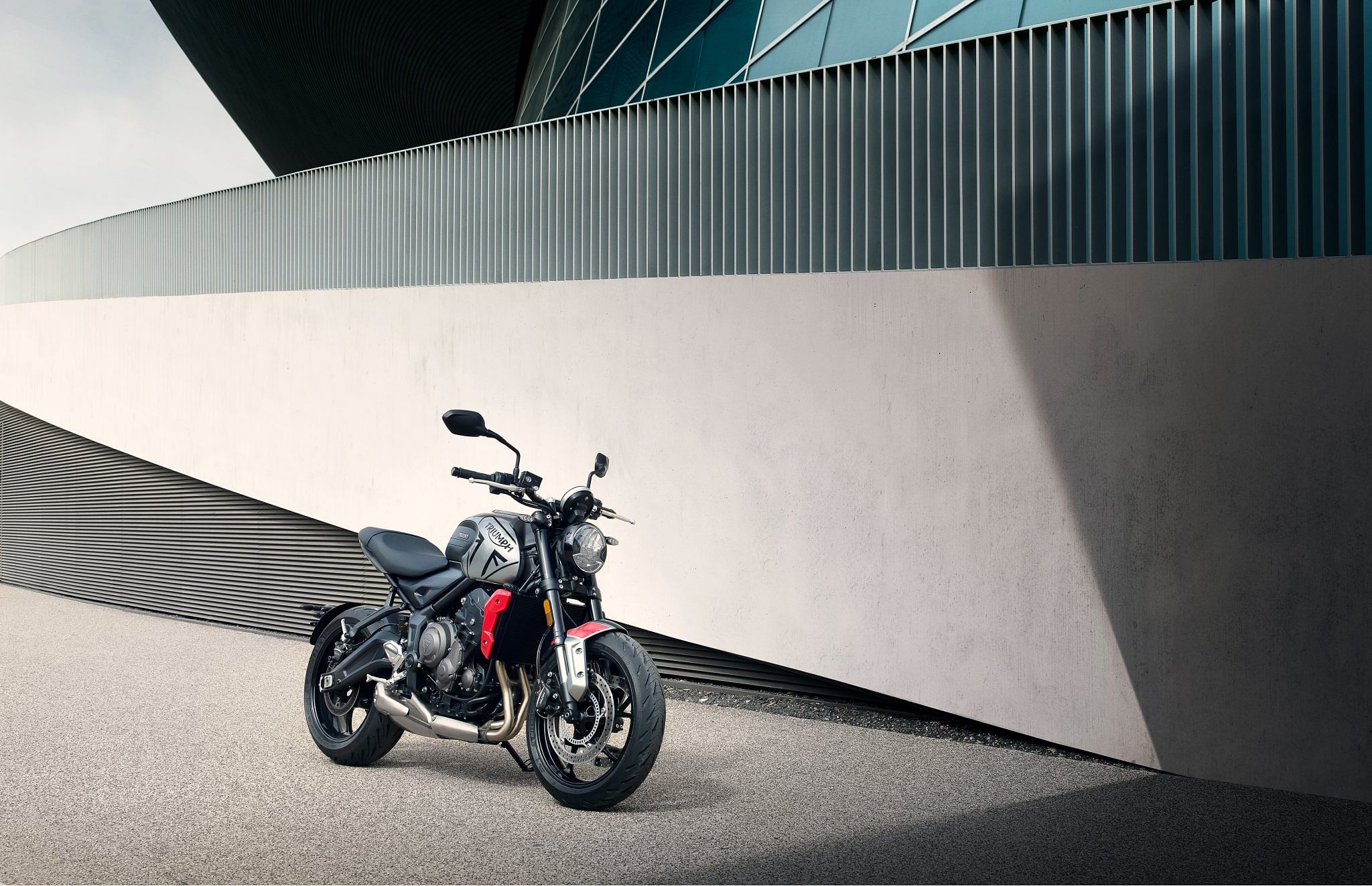 Moving onto the breaking department, we see 310-mm discs up front that come paired with two-piston Nissin calipers. The rear wheel on the other hand, gets a single disc with a single-piston Nissin caliper. The Trident 660 is grounded by 17-inch cast Aluminium wheels wrapped in Michelin Road 5 rubber. In terms of marketing competition, it shares the same racing line as the Kawasaki Z650 and the newly launched Honda CB650R. We believe that Triumph are also looking to crack into the middle-weight, entry level priced market which allows them to tap into a market of slightly younger buyers. Considering the Trident’s sporty aesthetic, it also fits there very well. The appeal is prominent – British power cruising, great handling for everyday indulgences, touring alter-ego and finally, a sub-par pricing.

The Triumph Trident 660 is currently in showrooms and slates in at a starting price of Rs 6.95 lakh, which is highly impressive given the specs on paper. Triumph now offers 16 motorcycles in India with this one being the youngest and cheapest.