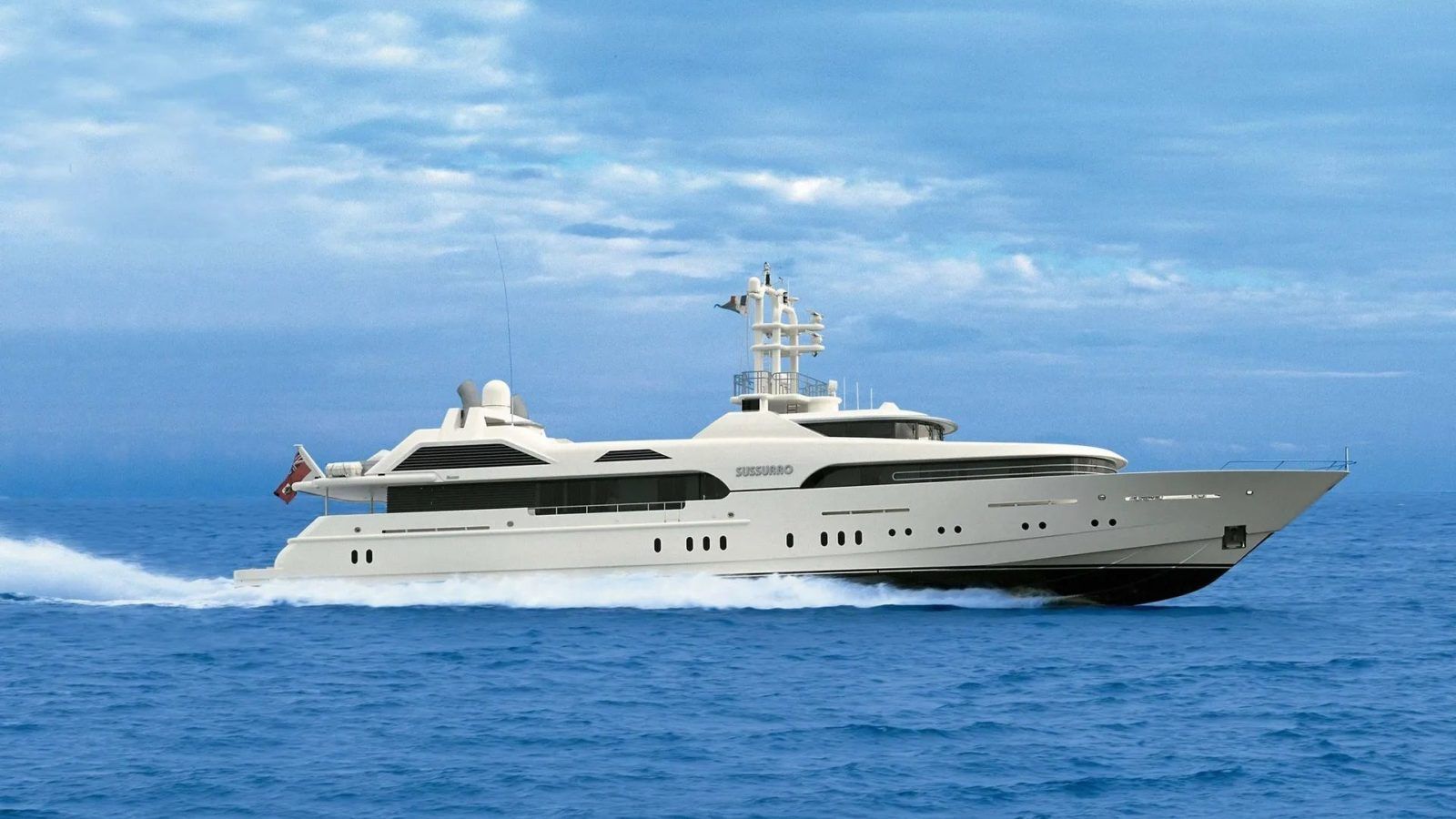 If one has to get a glimpse of what money can buy, the yachts of Roman Abramovich would perhaps be an excellent indicator. The Chelsea football club owner is renowned for his love of some of the world’s most beautiful sailing vessels whose majestic interiors can rival those of European palaces.

Roman Abramovich can buy any number of ships or yachts he wants. After all, Forbes estimates his net worth at around US$14.6 billion (as of 31 August 2021).

Besides Chelsea FC, the Russian-origin Israeli citizen has stakes in steel giant Evraz and mining company Norilsk Nickel. In 2005, Abramovich made US$13 billion by selling his 73 percent stake in the Russian oil firm, Sibneft, to Gazprom.

Abramovich was the governor of the Chukotka region in the Russian Far East from 2001 to 2013. During the period, he spent US$2.5 billion on the development of the region.

The billionaire’s fascination with gigantic luxury yachts is a reflection of the automotive toys, ranging from supercars to some of the swankiest private jets, the ultra-rich love to splurge on.

While Abramovich’s fleet will soon have a new member, Solaris, the current crown jewel among his vessels is Eclipse — one of the world’s three largest yachts. There are others that he either owns or has sold off.

The boats are examples of excellent design. They are sleek, powerful, easily manoeuvrable, well-balanced and technologically advanced.

Roman Abramovich is only 54 years old and consistently adds to his wealth from investments and ownerships. While he narrows down to his future spectacle, let’s take a look at some of the past and present gems of his private collection of superyachts. 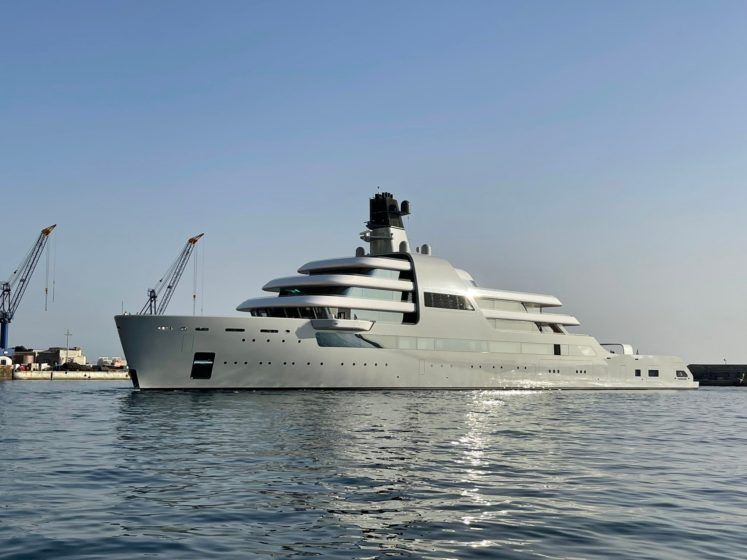 Superyacht Solaris is close to completion and will be Roman Abramovich’s new craft on the waters once it is launched. Though not much is known about the boat, the Solaris was photographed during the second of its sea trials in the North Sea and attracted media attention.

SuperYacht Times reports that the Solaris is designed by Australian interior designer Marc Newson and built by Lloyd Werft, a German shipyard. It has a helipad and outdoor beach club setup at the stern (rear of a sailing craft). It also has a swimming pool.

It has two nine megawatts Azipods, which, according to SuperYacht Times, are the most powerful ever fitted on a yacht. The Solaris has eight decks, and it can reportedly accommodate a staff of 60 and 36 passengers in its 18 super luxurious cabins. It is estimated to cost US$600 million.

Nonetheless, the Solaris, which measures around 140 metres, is not the largest yacht in Abramovich’s armada — that credit goes to Eclipse. 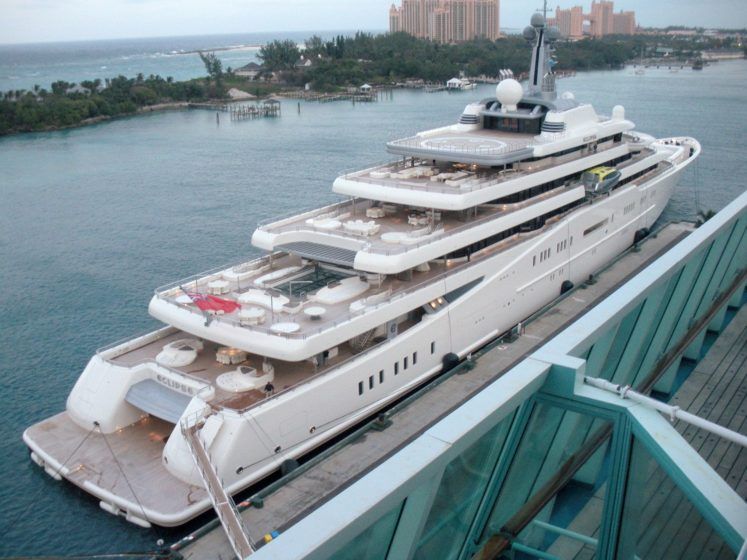 The superyacht Eclipse measures a massive 162.5 metres. Abramovich bought the ship in 2010 and is still in his possession. The most unique feature of the Eclipse is that it has a missile detection system, and the master suite has bulletproof windows.

Designed by Terry Disdale and made by German shipbuilder Blohm+Voss, it took about five years to build the Eclipse. It was the world’s biggest yacht till the 180-metre-long superyacht Azzam, which is owned by UAE President Khalifa bin Zayed Al Nahyan, took away the crown in 2013.

The Eclipse is a technological marvel. One of its two swimming pools can be used as a dance floor by bringing up the granite floor at deck level with the touch of a button. It can carry three helicopters at the same time — one each on its two helipads and one in the hangar below the foredeck. It has a submarine, which can dive to a depth of around 50 metres.

The giant vessel has nine decks with a range of luxurious services to opt from. The Eclipse features many amenities — including a cinema hall and a sauna — that one can expect in a superyacht. The Eclipse cost Roman Abramovich US$590 million at the time of purchase, and its beach house style interiors showcase the finest in Art Deco, lending it a timeless feel.

The Eclipse is powerful. It can attain a maximum speed of 21 knots and travel 6,000 nautical miles on a full tank. The yacht can house up to 36 guests in its 18 cabins and needs 70 people for operations.

It underwent a refit in 2015. Reports indicate that it is still counted among the priciest yachts in the world with a valuation ranging between US$600 million to US$1.5 billion. 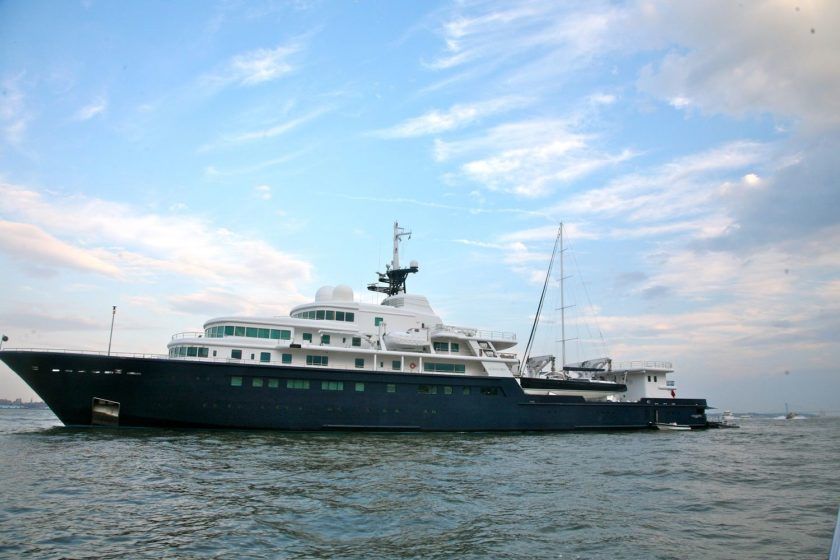 Before Eclipse became a prized possession of Roman Abramovich, it was this 112.8-metre luxury yacht which was the finest in his collection. Built in 2000 by now-bankrupt German shipbuilder Bremer Vulkan, it has 10 guest cabins which can house 20 guests. It has a crew of 35 supporting operations.

Abramovich bought the Le Grand Bleu from its previous owner US telecommunications baron John McCaw. The Chelsea FC owner then had it remodified, adding a pool measuring 5 metres. In 2006, the billionaire sold it to his friend, oil tycoon Eugene Shvidler, who is its current owner.

The Le Grand Bleu comes with its own fleet of smaller boats, a landing craft and two 11-metre sports boats. It was in the news in 2017 when some tourists were unable to see the Statue of Liberty because the superyacht blocked the view. 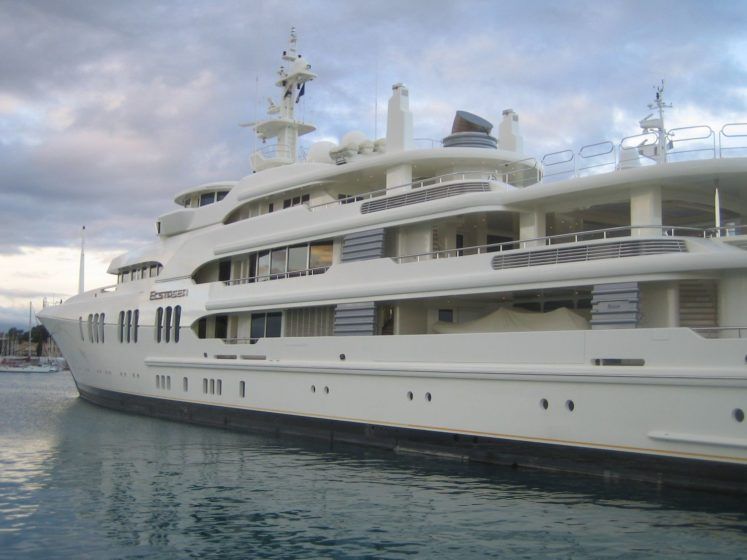 The Ecstasea was designed by De Voogt Naval Architects and built at The Feadship Royal Van Lent Shipyard in the Netherlands in 2004. According to Superyacht Times, the yacht measures 85.95 metres and has four MTU engines alongside one General Electric engine. The combined power gives the Ecstasea an incredible top speed of around 33 knots.

It has state of art rooms designed in Asian decor by Terence Disdale, and an array of luxurious amenities accentuate its plush eight cabins. The Ecstasea is designed for the stay of 15 occupants, with a supporting squad of 27 to man the boat.

It also has a helipad at the front, where the platform can be lowered and doors on either side can be closed over the helipad to turn it into a hangar.

The Ecstasea was sold by Abramovich in 2009. 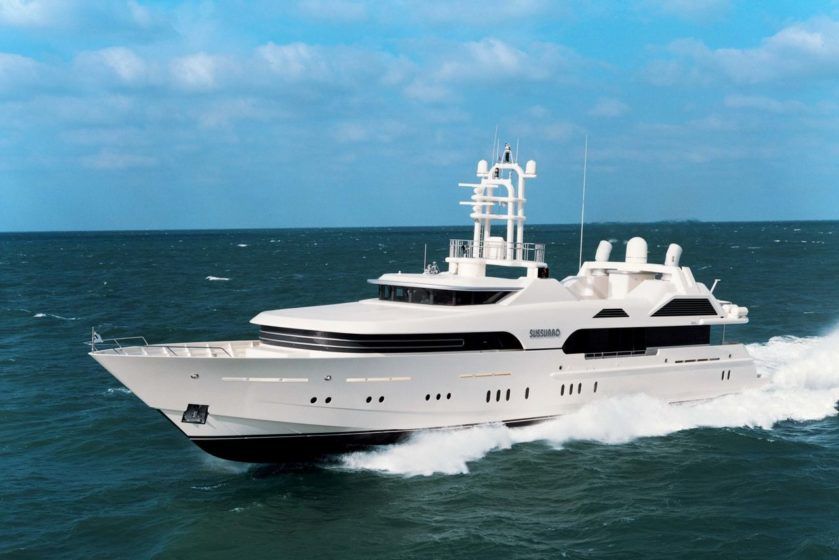 The Sussurro was designed for speed. According to its maker, Feadship, the machine, which was built in 1998, has two Paxman diesels and twin TF40 gas turbines that power three water jets. The combined 15,000 HP can take the all-aluminium craft to a top speed of 46 knots — enough to ensure that the owner can reach remote diving spots quickly.

De Voogt Naval Architects and Don Shead were responsible for its exterior design. Terence Disdale did the interiors, which look like a mix of culturally infused objects he has collected during his travels to places in Africa and Asia, such as Zulu and Bali, respectively.

Lightweight to near-weightless materials has been used to make the total weight of the boat within prescribed limits to meet the speed factor. The 162.5-metre-long Sussurro can accommodate 12 guests in its six cabins. It also has five cabins for 12 supporting staff to operate the boat.

Abramovich had bought it from its original Middle-Eastern owner. According to a November 2020 report by Boat International, Sussurro is currently valued at around US$22 million only. 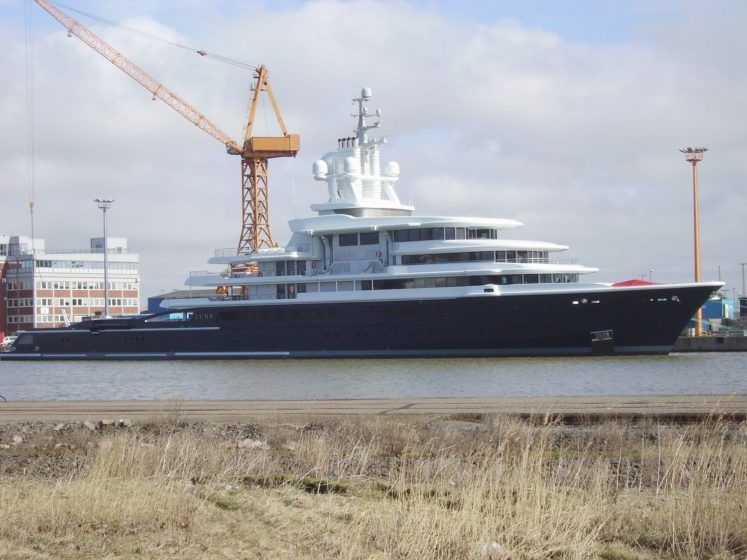 Measuring 115 metres, Luna was built at Lloyd Werft and delivered to Roman Abramovich in 2010. While its exteriors were designed by German ship designer Newcruise, the Luna’s tasteful interiors have been done by Donald Starkey.

Known as an “explorer yacht”, its steel hull can cut through ice floes. It has two helipads, a covered swimming pool, a beach club that goes down to the swim platform and designated areas for sunbathing.

The Luna has nine decks. It can accommodate a 50-member crew and take up to 18 guests in its nine staterooms. It has two diesel-electric engines that give it a top speed of around 22 knots.

When it was delivered to Abramovich, he took it for a cruise with his family around the Kristiansand Archipelago.

Azerbaijani businessman Farkhad Akhmedov bought it from Abramovich for about US$300 million in 2014. Then, it underwent a refit for an estimated US$50 million. Today, it is at the centre of the divorce case between Akhmedov and his former wife Tatiana Akhmedova.

Currently owned by billionaire and Hong Kong property tycoon Samuel Tak Lee, Pelorus was originally commissioned for a Saudi Arabian businessman who quickly sold it to Abramovich in 2003.

Pelorus has two Wärtsilä engines and can reach a top speed of 20 knots. It can house 18 guests in nine cabins and requires around 40 people for maintenance and operations.

Measuring 115 metres in length, the Pelorus was built at the Krogerwerft shipyard of German shipbuilder Lurssen. Its exterior has been designed by Tim Heywood while Disdale’s style is evident from the interiors, which exude a luxurious beach house vibe.

Heywood made the best use of the size of the vessel and built two helipads, two swimming pools, a lido and a transom that opens to form a sea-level platform. The master suite has a private deck that can’t be seen from any part of the Pelorus.

Abramovich had once lent the vessel to Chelsea FC players John Terry and Frank Lampard after the club’s English Premier League win. Additionally, Terry took his wife Toni on their honeymoon on the Pelorus in 2007.

In 2011, American film mogul David Geffen purchased the Pelorus for US$300 million. Geffen then sold it the same year for US$214 million to a royal family in the UAE.

Yacht superyacht eclipse Content Hub Chelsea Roman Abramovich Solaris Le Grand Bleu Luna Pelorus Sussurro Ecstasea
Manas Sen Gupta
Manas enjoys reading detective fiction and writing about anything that interests him. When not doing either of the two, he checks Instagram for the latest posts by travellers. Winter is his favourite season and he can happily eat a bowl of noodles any time of the day.
Travel Culture Entertainment Food
Sign up for our newsletters to have the latest stories delivered straight to your inbox every week.