All the major highlights from the 2022 Metaverse Fashion Week

The Metaverse Fashion Week (MVFW), the first of its kind four-day event, was held on Decentraland from 24-27 March 2022.

The glittering event was not just a milestone for the world of fashion but was also a cornerstone for the concept of the metaverse and everything it is going to become in the near future.

Decentraland, the host of the MVFW, is built on the Ethereum blockchain and started as a pixelated 2D grid before evolving into a 3D universe.

The MVFW reportedly had over 60 fashion brands showcasing more than 500 looks. Among other highlights were over four after parties and presence of prominent artists during the four-day event.

Among the many prominent brands and stores at the event were Selfridges, Estée Lauder, Bulova, Tommy Hilfiger, Dolce & Gabbana and Etro.

The MVFW was open to all on Decentraland and was a completely free event where visitors could buy NFTs of the fashion brands using the platform’s native decentralised cryptocurrency MANA through their digital wallets.

Exclusive digital events were also part of the MVFW. Runway events, tech demos and meets with designers were part of the VIP events. 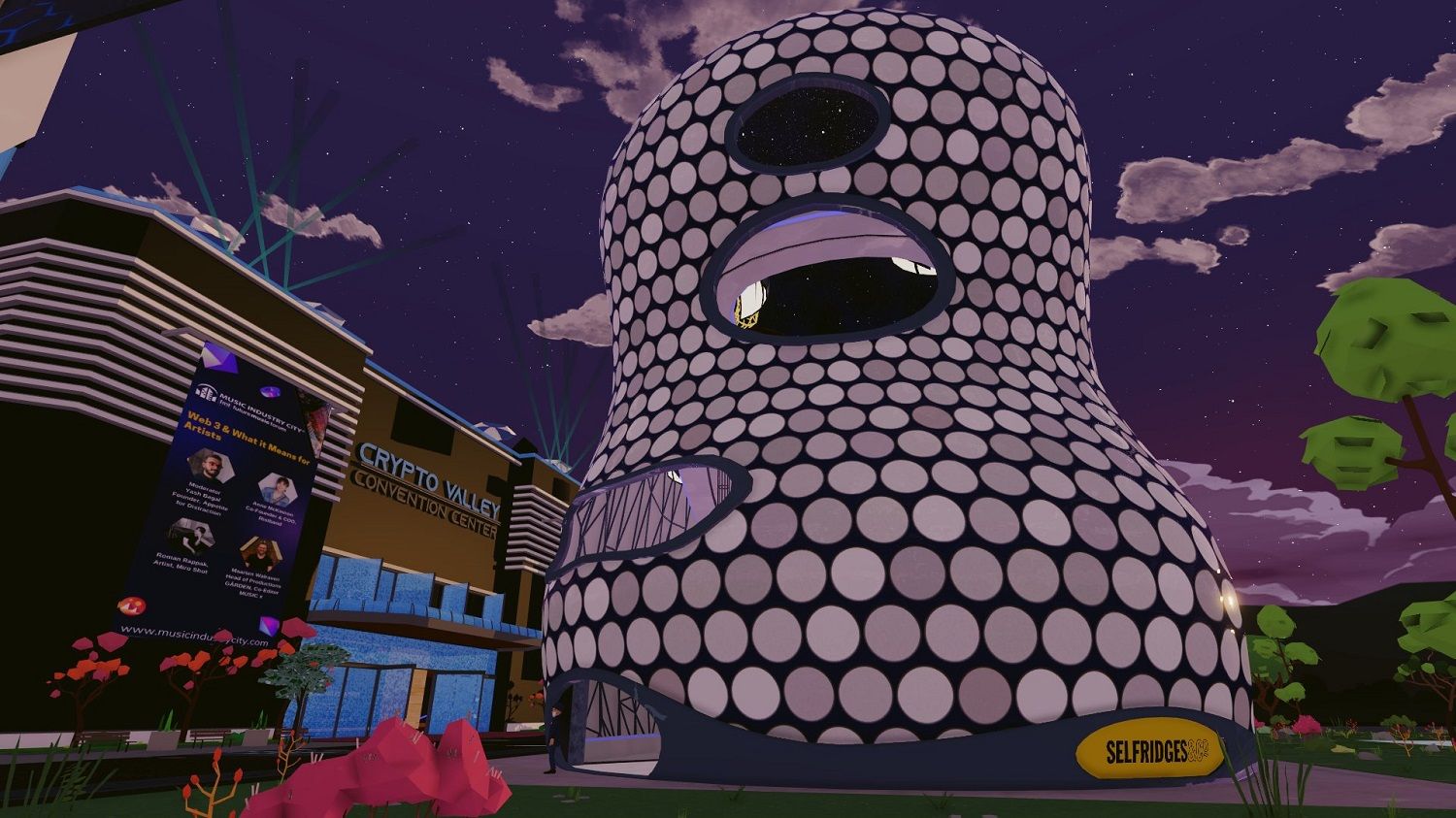 The MVFW was kicked-off with London-based retailer Selfridges opening its flagship store with an immersive experience with Paco Rabanne + Victor Vasarely collection. These are non-fungible tokens (NFTs), which can be viewed in the virtual store by anyone on Decentraland.

The launch is reportedly inspired by the retailer’s Birmingham store and offers visitors a guided tour of the past works, history and highlights through NFTs.

A limited quantity of 10,000 of the complimentary Advanced Night Repair NFTs was available for the duration of MVFW.

Users could claim one NFT wearable to give their avatars a special glowing aura by stepping virtually inside the Advanced Night Repair “Little Brown Bottle” and unlock a Proof of Attendance Protocol (POAP) badge.

Estée Lauder was the only beauty brand at Decentraland.

Watchmaker Bulova presented a reinterpreted version of its iconic Computrom wristwatch in collaboration with D-Cave — which is described as a “lifestyle metaverse marketplace”.

Besides their NFT, the watch is available for purchase for the visitors in wearable avatar version and physical version.

Available in the black-and-green colourway, the Special Edition version of the watch is available only as NFTs — limited to 1,000. It features an exhibition mineral crystal case top which showcases the circuit board within it.

According to D-CAVE, it “features a sleek black IP stainless steel case and matching bracelet with a green LED time display with dual time zone capabilities.”

Major panel discussions throughout the duration of MVFW were moderated by David Cash of CashLabs at the CashLabs gallery.

A special panel discussion was held on experiencing fashion from a virtual perspective featuring Nick Knight and Calumn Knight of Show Studio.

Panel talks on CashLabs were on topics such as digital fashion, e-commerce and the metaverse, virtual couture, the concept of sustainability within fashion, and the history and future of virtual fashion.

The CashLabs gallery was also the venue of a two-day film festival curated by SHOWstudio held throughout the day on 26 and 27 March.

Fashion brand Tommy Hilfiger showcased its spring 2022 collection virtually at the MVFW and opened a digital store for visitors to buy NFTs connected to the label. Boson Protocol helped Tommy Hilfiger build its presence in the metaverse. The label’s store could be visited within Boson Portal on Decentraland.

Among the items available for the visitors to buy NFTs of were the madras shirt for women and a unisex hoodie bearing the Hilfiger logo. Physical versions of the items could also be obtained by redeeming the NFTs.

On 25 March, Justin Banon and Victoria May of Boson Protocol joined metaverse expert Cathy Hackl, who is popularly known as the ‘Godmother of Metaverse’, and designer Tommy Hilfiger for a fireside chat discussing metaverse fashion.

An all-new Luxury District was opened by UNXD and Decentraland Foundation. This is where MVFW’s main luxury catwalk took place daily.

Drawing inspiration from Avenue Montaigne of Paris, the district features luxury fashion brands such as Dolce & Gabbana and Etro along with luxury watchmaker Franck Muller.

In the district, Etro unveiled the Liquid Paisley collection as part of the MVFW. Launched in partnership with UNXD at the brand’s boutique, the digital wearables will be airdropped to Decentraland users once they submit their wallet address, the deadline of which is 31 March.

The Luxury District is also where Decentraland introduced its first-ever NFT emotes. Users got a chance to grab them for free, based on a first-come-first-serve basis.

These NFTs were made available at a special statue — a floating young person with arms outstretched — in the district.

According to Decentraland, a user must “spam the ‘Money’ emote” at the statute till a progress bar is full. Once done, one of three different fashion-related NFT emotes shows up in the user’s emote backpack limited to one per person. All three unique emotes are tradeable on the Decentraland Marketplace.

Strutting a massive ramp amidst what appeared like a galactic discotheque, the cat-faced models posed in unique D&G clothing including a smart yellow dress featuring the brand logo all across.

Among others who had a catwalk show was Fresh Couture, which made its metaverse debut with a boutique store in Decentraland at the MVFW.

One of the biggest highlights at Metaverse Fashion Week was the presence of Sophia, the world famous humanoid robot designed and created by Hong Kong-based Hanson Robotics. Sophia was seen visiting several areas within the Decentraland world and especially around MVFW spots such as Rarible Fresh Drip Zone.

On social media, Decentraland encouraged visitors to spot Sophia anywhere on the platform and post selfies with her on Twitter with the hashtag, #findingsophiatherobot. This landed the users an opportunity to enter a special NFT giveaway.

Some Twitter users shared their meeting with the internationally renowned robot at the MVFW.

Designers such as The Fabricant, Girl Gang Label, Placebo, Artisant and others were also among those featured in the Fresh Drip Zone.

This is also where special collections from Vault Swiss watches and Miss J represented by Crypto Couture are available.

At the centre of the area is a dome-shaped Rarible store where special NFTs and curated unique pieces can be seen. Visitors can also participate in giveaways in the store.

Decentraland says that the Fresh Drip Zone place is temporary, but it is not clear if it will be dismantled after the conclusion of MVFW.

Threedium is a 3D engine that joined hands with creative production agency Craft to launch a virtual shopping mall at Decentraland during MVFW.

Interestingly, it is the Threedium 3D engine that has made the Metaverse Fashion Week possible with its unique programme which can instantly convert 2D designs into 3D models.

The Threedium mall hosts several branded boutique shops besides 3D wearables from global brands such as Dolce & Gabbana, Casablanca, DKNY and Paco Rabanne. Offerings from brands that exist solely in the virtual space, such as DeadFellaz and FangGang, were also available at the mall.

Cathy Hackl, in her avatar form, delivered a welcome speech at the mall’s inauguration.

Argentinian rapper and singer Nicki Nicole performed at an after-party at the end of the third day at MVFW 26 March.

In just over two years, Nicole has become one of the biggest names in the Latin American and Spanish music scenes.

She has been nominated for Latin Grammys and other major Argentine and Spanish music honours. Nicole has also been to Coachella and made her US TV debut with a performance on Jimmy Fallon’s The Tonight Show in 2021.

Among the other performances of Day 3 was DJ Bob Sinclair opening the night by performing on a set created by traditional Italian lifestyle brand Hogan. This event was created in collaboration with NFT platform Exclusible, which described it as the “first-ever metaverse dance competition”.

Independent artist Marc-O-Matic’s store went live at the Metaverse Fashion Week. On Twitter, the designer thanked Rarible and Metakey for the opportunity. Visitors to the store could explore unique creations such as a three-piece set dubbed Space Jockey, which looked like a futuristic space suit.

The closing show was by fashion brand Dundas World, which also showcased a series of its digital dresses at its pop-up store in the Luxury Fashion District.

A curated capsule of the brand’s latest styles were showcased at the fashion show and store via UNXD. These were available for pre-order at the official site of the brand. Bespoke styles by Peter Dundas were designed specifically for the MVFW.

Inside the store, the brand’s signature black panthers wearing diamond collars shared space with mannequins dressed in Dundas. On a screen in the store, visitors could see a real-world video broadcast featuring models in Dundas clothing.

Singer-songwriter Claire Elise Boucher, better known as Grimes, took the MVFW by storm at the conclusion of the event with an electrifying DJ set for the attendees.

The AUROBOROS X Grimes show at the MVFW featured a performance that was held in a massive set that looked like a merger of nature with the celestial. Avatars of the attendees were seen climbing a huge spiral staircase to the top of what looked like a suspended platform.

Dancing on it was Grimes’ digital avatar — a lady with two white ponytails. According to AUROBOROS, Grimes’ avatar was inspired by X-Men character Mystique and the bodysuit of Black Panther.

Etro Dolce & Gabanna Decentraland Metaverse Fashion Week
Manas Sen Gupta
Manas enjoys reading detective fiction and writing about anything that interests him. When not doing either of the two, he checks Instagram for the latest posts by travellers. Winter is his favourite season and he can happily eat a bowl of noodles any time of the day.
Travel Culture Entertainment Food
Sign up for our newsletters to have the latest stories delivered straight to your inbox every week.