Home > Gear > Aston Martins, Omegas, Jaguars, and all the gadgets and gears we spotted in ‘No Time To Die’ 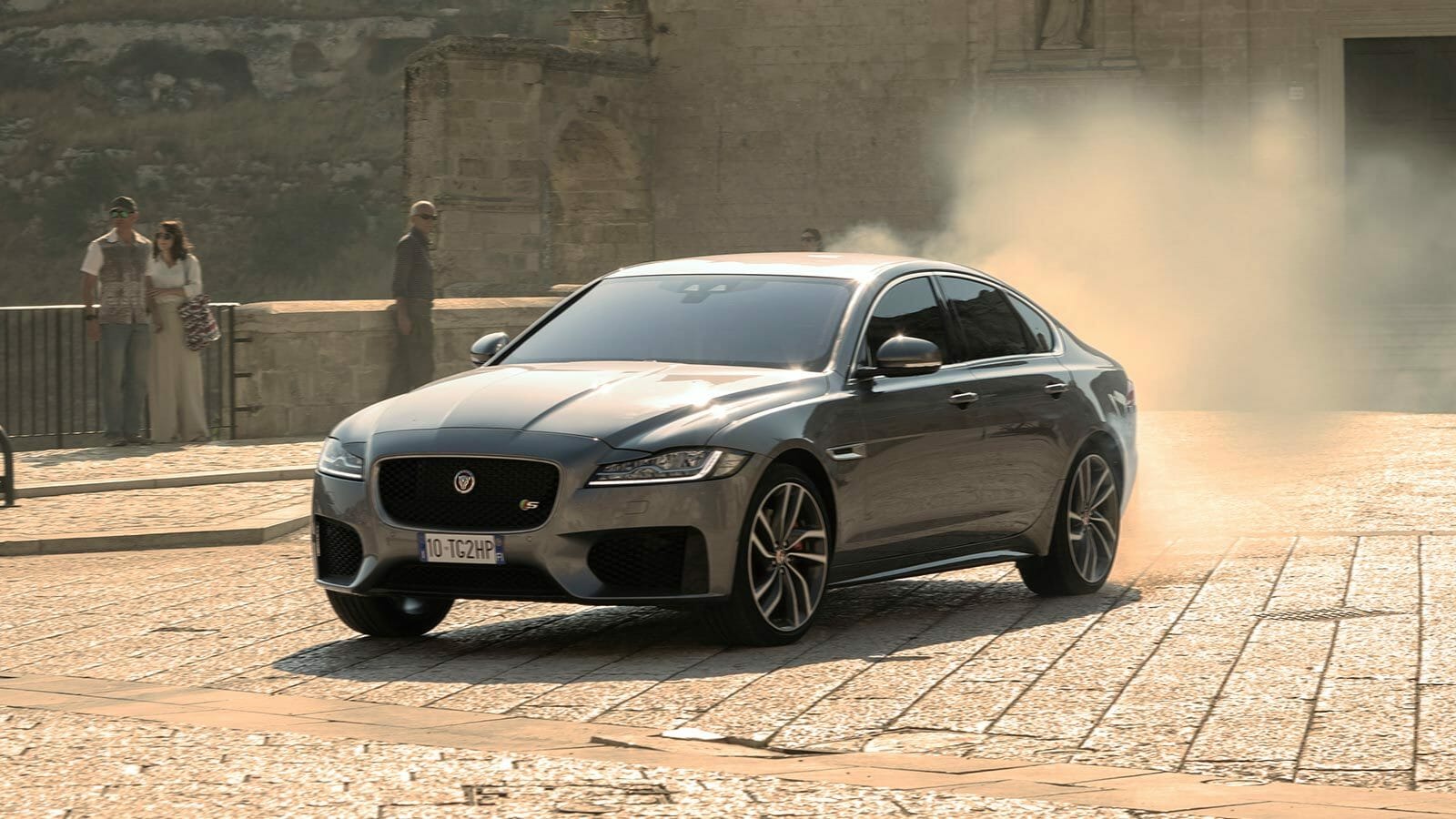 Aston Martins, Omegas, Jaguars, and all the gadgets and gears we spotted in ‘No Time To Die’

James Bond films are as famous for their action as well as for their depiction of advanced machines and technologies.

Previous James Bond films such as The Spy Who Loved Me (1977) have featured the unforgettable Lotus Esprit submarine car — the one that billionaire Elon Musk now has in his awe-inspiring collection of cars. Taking forward the legacy, the vehicles and gadgets in No Time to Die ensure that fans get to see some of the best products in the world today besides those that have created history with Bond in British cinema’s longest-running film franchise.

Culture
‘No Time To Die’: Everything we know about Daniel Craig’s new James Bond film

So, what are the new gadgets James Bond uses to fight his enemies in this film? A machine-gun-toting car, speedy bikes, Nokia phones and Omega watches.

To die-hard James Bond fans, a Bond film is incomplete without an Aston Martin. Of course, previous Bond films have featured exotic, fast and classic cars, including the 1961 Sunbeam Alpine II from Dr. No (1962), which has the honour of being among the first Bond cars in films.

But Aston Martin remains special, almost an extension of Bond’s on-screen image as a suave, smart, stealthy and strong character.

There are four Aston Martins that feature in No Time to Die. Of them, the one that has received a lot of attention is the Aston Martin DB5.

The DB5, an icon among Aston Martins, is making a return to Bond films with the 25th instalment. It was first driven on-screen by the legendary Sean Connery — the first actor to play James Bond and, for many, the best of them all — in Goldfinger (1964).

The famous photograph of Connery posing next to it on the breathtakingly beautiful Furka Pass in central Switzerland also helped the car cement itself in film history.

Fans have been able to see more than just a glimpse of the DB5 in No Time to Die, thanks to the trailers. To the delight of many, the car in the film appears to have been modified with the gadgets associated with Bond.

That explains the two machine guns that pop out of the headlamps for Craig to fire at his enemies and get them off his back during a chase sequence.

Bond cars are usually depicted as having bulletproof glass. It won’t be a surprise if the glass of the on-screen DB5, too, is able to prevent bullets from harming our favourite spy.

Besides the DB5, No Time to Die also features the Aston Martin V8 Saloon, which the carmaker says is “similar to the one first seen in 1987’s The Living Daylights”. The V8 Saloon is one of the fastest cars of its time.

Lashana Lynch, who plays new agent Nomi in No Time to Die, will be seen driving an Aston Martin DBS Superleggera. The outstanding machine is fitting for the British actress, who apparently takes over the 00 code duties of James Bond, following the latter’s retirement in the film.

DBS Superleggera is a super grand tourer. The beautifully designed and powerful machine has a 5.2 litre twin-turbo V12 engine. Its 715bhp takes the car to a top speed of 339.5 km/h. The coupé variant can go from 0 to 100 km/h in 3.4 seconds, while the volante variant does that in 3.6 seconds.

Capping them all is Aston Martin Valhalla, a yet-to-be-released sportscar, which will appear briefly in the film. It is not clear who will be seen driving this phenomenon from the British automaker (though fans hope it is James Bond), but Valhalla will be something to watch out for.

The car has a mid-engine 950PS petrol/battery electric powertrain, along with the power from a rear-mid-mounted 4.0 litre twin-turbo bespoke V8 engine.

Like Aston Martin, Swiss luxury watchmaker Omega has a long association with the fictional British MI6 agent. Omega watches are as much part of Bond gadgets as is its association to the James Bond lifestyle.

The first time James Bond wore an Omega was in the James Bond movie GoldenEye (1995), in which Pierce Brosnan played the character. Thus, Omega is celebrating 25 years with the Bond franchise, with No Time to Die.

There are three Omega watches worn in No Time to Die. Each is a gem and designed for a specific character from the film.

Daniel Craig wears the Seamaster Diver 300M 007 Edition. The Diver is designed for military use. Its bracelet and case are made from Grade 2 titanium, while the dial and bezel ring are made from aluminium.

The watch also comes with a helium escape valve, which helps wearers work for a longer duration at times such as while underwater.

Powered by Omega’s Co-Axial Master Chronometer 8806, a unique feature of the watch is its capacity to resist very strong magnetic fields. Omega says that the watch can remain unaffected even under magnetic fields of 1.5 tesla (15,000 gauss).

Lynch wears a 38mm Seamaster Aqua Terra. Her watch has a black dial and a black NATO strap. This watch also has similar anti-magnetic properties as Daniel Craig’s watch.

Its transparent case back allows the wearer to see the mechanisms of the watch. The case is made of steel.

Studded with diamonds in the hour markers and black-coloured hands on a silver dial, this watch is a classic piece of aesthetic beauty.

The German camera maker is one of the major partners of the James Bond franchise. In No Time to Die, viewers will be able to see a Leica Q2 in the London home of Q (played by Ben Wishaw) and at James Bond’s Jamaica house.

Since Q has the camera, we cannot help but wonder about the technical tinkering the genius secret service researcher may have done to it and whether Bond gets to use the gadget.

Anyway, the camera maker has launched a special edition Leica Q2 in honour of the iconic character.

The camera, which has ocean-green leather on its body, has a 007 logo and a Bond gun barrel design on the top plate and lens cap, respectively. The gun barrel design is what James Bond fans have been seeing at the start of every Bond film.

Only 250 units will be produced, and each will have an individual number. The idea is to make the camera a collector’s item for its owners.

What adds to its sophistication is the customised Globe-Trotter case which has been handcrafted by the luxury suitcase brand. Its colour is the same as that of the leather of the Leica Q2.

The camera has a 47.3-megapixel full-frame sensor. It has an OLED viewfinder with a resolution of 3.68 megapixels. The camera is capable of recording 4K videos at 3840 x 2160 pixels and boasts a frame rate of 30 or 24 frames per second.

A much-talked-about takeaway from the trailer has been a scene in which James Bond is seen jumping over a wall on a bike using an arch for a ramp. The scene was filmed in Matera, Italy, and the impressive stunt has been lauded by both fans of the franchise and action freaks.

In a promotional poster from the film shot in Matera, Daniel Craig is seen atop a Triumph Scrambler 1200. So, one has reasons to believe that the bike used in the stunt was a Triumph.

The iconic British bike maker announced its partnership with EON Productions, the maker of James Bond films, in December 2019. This is the first time that Triumph is part of a James Bond film.

No Time to Die will feature two Triumph bikes — the Tiger 900 and Scrambler 1200. The bikes featured in multiple sequences, including a chase in Norway and tough Scottish terrain.

To celebrate its association with the franchise, Triumph has launched limited-edition Tiger 900 Rally Pro bikes. Only 250 will be made, all in sapphire black matte and 007 graphics. Each will have a serial number on the handlebar besides corporate and movie symbolism.

Nokia is the official phone partner of No Time to Die, which means that 00 agents James Bond and Nomi will be seen using phones made by the Finnish telecommunication brand.

Multiple media reports in January this year said that a delay in the release of the film was also caused by sponsors such as Nokia wanting to feature their upgraded products instead of those which were used when the scenes were first filmed over two years ago.

Nokia ad campaigns around the film have prominently featured Lynch. She will be seen using a Nokia XR20. Nokia is reputed for its long-lasting and sturdy phones, and XR20 falls in the same league.

According to Nokia, the 5G-enabled XR20 comes equipped with the very tough Corning Gorilla Glass Victus screen, and its casing is MIL-STD-810H military standard. The phone is resistant to everything — scratch, drop, temperature, water — and is “kid-and-pet-resistant”.

Nokia will provide three years of OS upgrades and four years of monthly security upgrades to ensure that the XR20 remains up-to-date with the latest in software and security through 2025.

As for the camera, the Nokia XR20 comes with a dual rear 48 MP sensor and a 13 MP ultra-wide sensor camera. A unique feature is OZO spatial audio capture, which lets users cancel any noise or wind disturbance at the time of recording. OZO is also part of the phone’s playback system.

Lynch also featured in the promotions of the Nokia 8.3 5G phones at London’s Pinewood Studios, one of the places where No Time to Die has been shot. According to a December 2020 report by HMD, the company that markets Nokia-branded smartphones, the movie features the Nokia 8.3 phone.

The phone’s PureView quad camera is designed for a cinematic shooting experience, backed by ZEISS technology, on its 6.81 inches screen. Inside it is an energy-efficient Qualcomm Snapdragon 765G Modular Platform.

According to HMD and several fans, the iconic Nokia 3310 will also feature in the film. The 3310 is considered one of the most famous mobile phones of all time. Its performance cemented its reputation as an extremely reliable phone, and it is today a pop culture icon with memes and GIFs reflecting on its durability.

There are two models by Land Rover that are seen in No Time to Die.

One of them is the Land Rover New Defender 110 X. The car was reportedly tested by the film’s stunt crew. This means that the New Defender will feature in some of the thrilling sequences from the movie.

Besides New Defender, the James Bond film also has Range Rover Sport SVR from the same stable. The car is the fastest and most powerful among Land Rover cars. It features Gloss Black wheels and Carbon Fibre Exterior Pack with a body-coloured Carbon Fibre bonnet.

In scenes from Italy, fans will also get to see one of the earliest luxury SUV cars by the company — the Range Rover Classic. And while James Bond is in Jamaica, a bluish-green Land Rover Series III will also appear on screen.

The Jaguar XF was seen during filming of the scenes in Matera, chasing the Aston Martin DB5 driven by James Bond.

Jaguar says that “No Time To Die‘s henchmen demonstrate that no street is too small and no corner too tight”, indicating that it will be driven by Bond’s pursuers through the old Italian tourist city.

The XF is a magnificent machine on four wheels. The Jaguar XF R-Dynamic model fitted with a P250 RWD Automatic engine has a top speed of 250 km/h and acceleration of 0-100 km/h in 6.9 seconds.

It comes with All Surface Progress Control and All Wheel Drive to ensure that it moves swiftly without skidding off on surfaces with less friction.