Home > Living > People > Gan-Gan to Wombat: Adorable nicknames royal family members have for each other 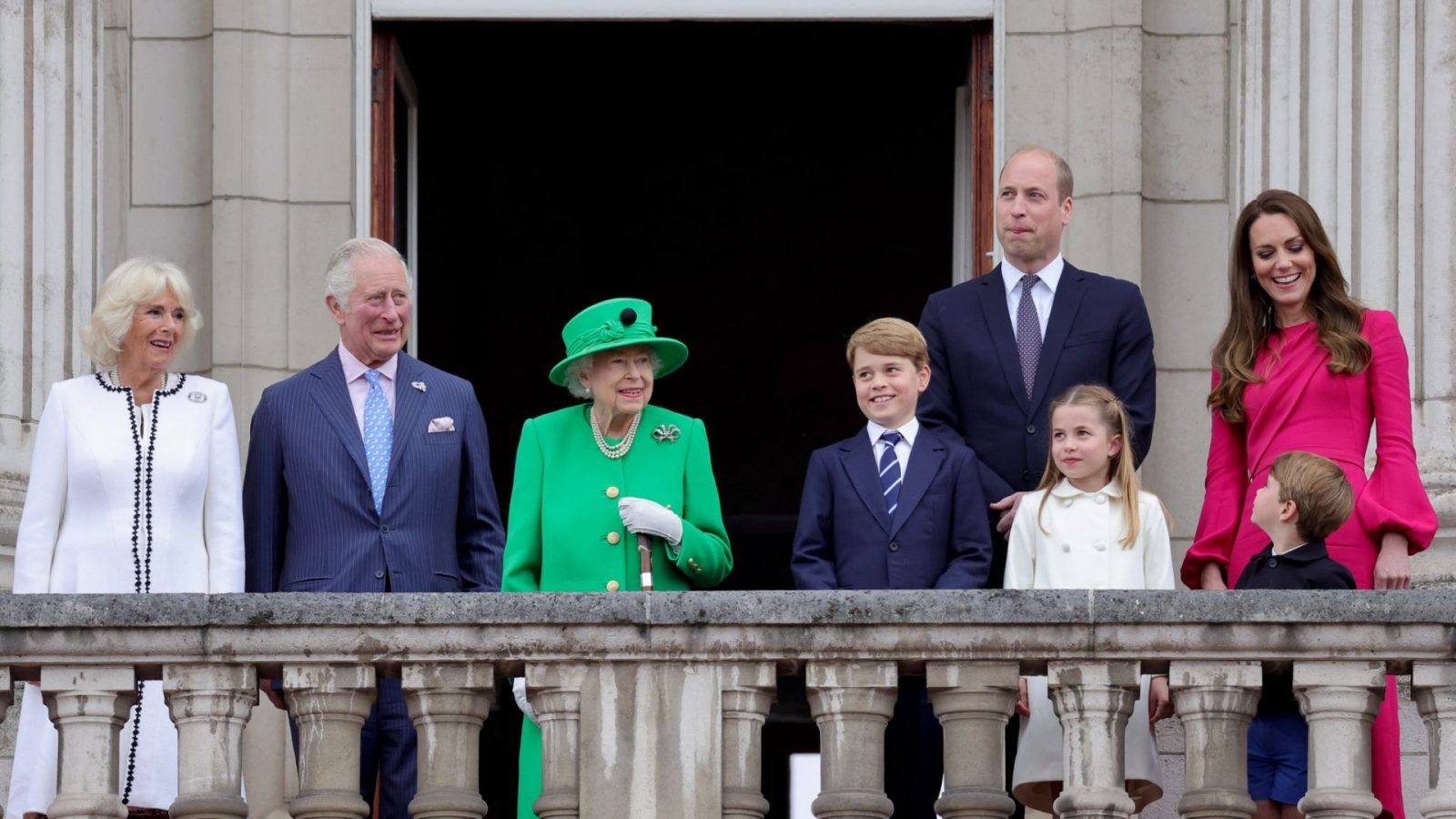 Gan-Gan to Wombat: Adorable nicknames royal family members have for each other

The epitome of elegance, sophistication, culture and regality, the Royal family is an emblem of British heritage and tradition. Every appearance of each family member, whether it is Queen Elizabeth II, Prince Charles, Prince William, Kate Middleton, Prince Harry or even Prince George, Princess Charlotte or even baby Prince Louis, they grab global attention. But, when it comes to how closely-knit a family they are, the Royal family nicknames are proof of the strong and close bond the members share.

Away from the paparazzi, the British royal family is like any other ordinary family where every member at Buckingham Palace has a nickname that not many would know.

To the world, she is Her Majesty, the Queen and Ma’am but at home, she is a mother and grandmother whom everyone loves and adores. For this, Queen Elizabeth II has some of the sweetest, rather interesting, nicknames that you probably didn’t know.

An adorable childhood nickname given to her by the Queen Mother was Lilibet. It is said that when Her Majesty was quite young, she couldn’t pronounce her own name and would call herself Lilibet. Additionally, since both the women were called Elizabeth, the sweet nickname was also used to avoid any confusion. It was later adopted by the late Prince Philip for his dear wife, and Prince Harry’s second-born daughter is also called Lilibet Diana Mountbatten-Windsor. Queen Elizabeth’s father King George VI is famously known to say, “Lilibet is my pride, Margaret is my joy.”

The Queen also had an unusual pet name from her late husband — Cabbage. It first came to be known through the 2006 film The Queen and was later confirmed by sources close to the Royal family. Royal biographer Robert Lacey also confirmed that while speaking with The Sunday Times in 2006, Prince Philip called the Queen Cabbage.

In the royal household, the Queen’s grandchildren and great-grandchildren have some sweet monikers for her as well. When he was young, Prince William struggled to pronounce words like ‘Granny’ and ‘Grandma.’ So he called her Gary. According to a Daily Mail report, “A guest who went to help asked who Gary was, assuming it must be a member of the royal household. ‘I’m Gary,’ responded Elizabeth. ‘He hasn’t learned to say Granny yet.’”

According to Cosmopolitan, while speaking to ITV in 2016, Kate Middleton revealed, “George is only two-and-a-half, and he calls her Gan-Gan.” For very close royal family members, the Queen is informally nicknamed Mama.

Second in line to the throne, Prince Charles and the late Princess Diana’s eldest son, Prince William, has some of the most endearing nicknames in Buckingham Palace.

Everyone lovingly calls the future king Will, and the Duke of Cambridge also likes it that way. But close family members have some endearing monikers for him. His late mother, Princess Diana, had one of the sweetest pet names for her firstborn — Wombat.

During a 2007 interview with NBC, Prince William explained, “It began when I was two. I’ve been rightfully told because I can’t remember back that far, but when we went to Australia with our parents, and the wombat, you know, that’s the local animal, so I just basically got called that, not because I look like a wombat, or maybe I do.”

The Duchess of Cambridge, too, has a loving nickname for her husband. During the Chelsea Flower Show in 2016, Prince William and Kate Middleton appeared together for their royal engagement and the Duchess was overheard calling him, “Babe, we’ve got those. We’ve got loads of those,” as he scanned through a Buxus plant. Prince William is also heard calling his wife Darling or Poppet and that just shows the incredible loving bond the two share.

His children, too, have some special names for their dad. Prince George calls him Pops. In 2018, during their visit to Leicester, Kate Middleton spoke to the crowd and reportedly said that William was playing football with the children and George asked, “Are you playing football tomorrow, Pops?”

A post shared by Duke and Duchess of Cambridge (@dukeandduchessofcambridge)

While penning a letter for Princess Diana for mother’s day in 2021, it was revealed on Instagram that Princess Charlotte calls her father Papa.

Prince Harry reportedly calls the Duchess of Cambridge Cath, deriving from her name Catherine. When radio presenter Scott Mills asked Kate about it, she did not confirm it, but she did not deny it either. She said, “I’m not sure, I’m not that familiar with it.”

The royal kids at Buckingham Palace are not only adorable but also have the cutest nicknames.

Third in line to the throne, Prince George’s classmates at school reportedly have a nickname for him. In a Vanity Fair report of 2019, a fellow parent at Thomas’s Battersea School, where the siblings go, revealed a few details about George — “George is really happy at school, [and] his nickname is P.G.”

The parent added, “He’s very popular and has lots of friends, and there’s very little fuss made about who he is. Either William or Kate do drop off, and they are always very friendly.”

Princess Charlotte is also quite a prominent royal figure. Kate’s nickname for her is proof of the sweet bond the mother-daughter share. The Duchess calls her Lottie.

On a 2019 trip to Northern Ireland, the Duchess of Cambridge was chatting to blogger Laura-Ann who mentioned her older son Bertie to be four at that time. Kate said, “Oh he’s the same age as Lottie,” revealed Laura-Ann to Daily Mail.

Prince Charles married Camilla in April 2005. The Duke and Duchess of Cornwall referred to each other as Fred and Gladys back in the day when the two were dating. According to a Cosmopolitan report, the names were derived from the characters of BBC radio’s The Goon Show.

Besides being the future King, Prince Charles is a much-loved grandfather to the young royals. Daily Mail says, the young Prince calls him Grandpa Wales after his official title Prince of Wales.

The Duke and Duchess of Sussex, Prince Harry and Meghan Markle may have stepped down as official working royals, but their strong bond and commitments continue to gain global attention.

In 2021, when Prince Harry set out on a bus tour of Los Angeles with The Late Night Show host James Corden, viewers got a sneak peek of the dynamics between him and his wife Meghan Markle. As Corden spoke to Meghan on Harry’s phone, she asked her husband, “Haz, how’s your tour of LA going?” and James was quick to ask, “Haz? I didn’t know we were calling you Haz now.”

A witty Prince Harry quipped, “No, well you’re not my wife, so…” Meghan also reportedly calls the Prince, H. During an interview with Tom Bradby for their documentary, Harry & Meghan: An African Journey, Meghan referred to him as H. She also lovingly calls him ‘My Love’.

Meghan Markle has some interesting nicknames as well. Prince Harry has kept it quite simple, though — during the 2018 Invictus Game reception, he was heard calling out to her as Meg. Prince Charles admires Meghan and her strong personality and the Royal family nickname that he has given her is Tungsten, referring to the hard nature of the metal.

A post shared by The Duke and Duchess of Sussex (@sussexroyal)

Prince Harry and Meghan Markle’s first born, Archie Harrison, is as cute and charming as his pet names.

Even before his birth in May 2019, royal fans have been referring to the baby as Baby Sussex. However, several adorable nicknames came up after he was born.

During his first royal engagement in September 2019, the Duke and Duchess arrived in Cape Town where they met Archbishop Tutu. Here, Meghan was heard calling her son Bubba. People reported that when she realised her son was dribbling she exclaimed, “Oh Bubba!”

Another heart-melting moment came during Archie’s first birthday. The royal couple came in support of Save The Children’s #SaveWithStories charity campaign. While reading a children’s book to him, Meghan called her little munchkin Arch.

The two sisters, daughters of Prince Andrew and Sarah Ferguson, the Duke and Duchess of York, have some sweet nicknames as well.

Wishing Princess Beatrice on her birthday, Princess Eugenie shared an old photograph from her childhood on Instagram and wrote, “You have been bossing it since before I was born… Happy Birthday to you Beabea!!”

Princess Eugenie also has some endearing Royal family nicknames, courtesy of her mother. The Duchess of York posed for some outdoor photographs for Town & Country where she stood on a swing. If you look at the engravings on the swing closely, you’ll find ‘Euge and Jack’ engraved on it. The names refer to Eugenie and her husband Jack Brooksbank. In another instance, Sarah Ferguson shared a behind-the-scenes photo on Princess Eugenie’s 30th birthday from her wedding day calling her ‘little magic dust.’