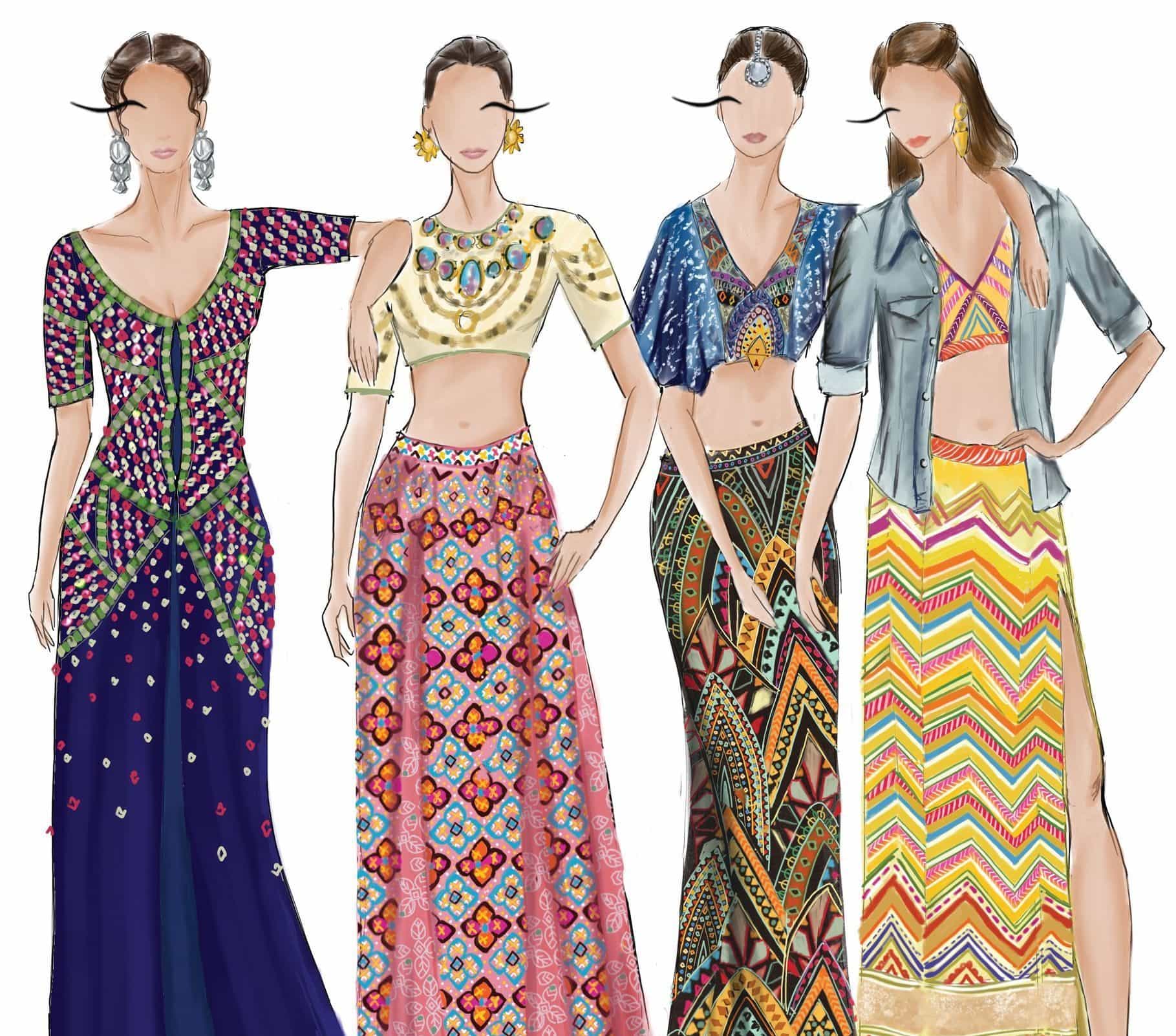 For decades now, Bollywood has set the trends for how women dress in India. Madhubala’s famous anarkali in ‘Mughal-e-Azam’ still inspires brides and the pink sharara that Kareena Kapoor Khan wore in the song ‘Bole Chudiyan’ from ‘Kabhi Khushi Kabhi Gham’ had many young women getting the outfit designed– whether it was from their local tailor or ordering it from designer Manish Malhotra himself. In Roli Books’ latest release, ‘100 Iconic Bollywood Costumes’, author and renowned journalist Sujata Assomull explores this influence of film in fashion, and takes readers through some of the most memorable costumes in Bollywood’s history. Insightful, and with stunning illustrations by Aparna Ram, we spoke to Assomull to get a deeper insight into ‘100 Iconic Bollywood Costumes’.

How has the book been conceptualised?

We start in the 50s with Indian cinema’s first movie filmed in techicolour, ‘Aan’, and look at Nadira, considered to be India’s first vamp – she brought androgyny to cinema and was very Marlene Dietrich inspired. I was lucky enough to her interview her while I worked at ‘The Indian Express’. The book ends with last year’s ‘Veere Di Wedding’ starring Sonam Kapoor Ahuja and Kareena Kapoor Khan – the film spoke of fashion inclusivity. The book looks at how the reel has influenced fashion through the years, and in a way charts the evolution of Modern Indian Fashion. It features commentary from some leading experts in the industry and also has a foreword written by Manish Malhotra. Each look has been interpreted by fashion illustrator Aparna Ram, and so it’s a visual delight.

How did you decide what costumes to feature?

It was a process. The whole team brainstormed. We spoke to a lot of senior industry professionals including film critics like and fashion experts. Ultimately, we chose costumes that we felt had an impact on fashion. So this is our 100.

There are a lot of costumes from the 60s and 70s – how easy or difficult was it to get so much information about the costumes?

It was hard but as a child of the 70s I have a good recollection of that era. I watched all those films multiple times and spoke to many people in the industry. Also Bhanu Athaiya’s book , ‘The Art of Costume Design’ was a great resource along with some old interviews of hers – her work was so prolific in this era.

Which is your favourite decade in terms of Bollywood fashion?

The 70s for sure. Zeenat Aman and Praveen Babi were just so glam you couldn’t help but be inspired by them. And then on the other end of the spectrum you have Smita Patil, who wore the sari with such grace yet had an inner sensuality.

I have always said that in India the reel matters more than the ramp in the making of a trend. How can you forget the polka-dotted, cropped blouse Dimple Kapadia flaunted so effortlessly in ‘Bobby’ or the Hermes Kelly aka Bagwati that was almost a character in itself in ‘Zindagi Na Milegi Dobara’? Fashion in film tells a story in the same way fashion on the catwalks do. And also speaks of the socio-cultural stance of that time: Sharmila Tagore wearing a printed blue swimsuit in 1967’s ‘An Evening in Paris’ was considered so risqué that Doordarshan edited it out.

How has costume design in Bollywood evolved over the decades?

For those working on set in the wardrobe and costume departments, the growing professionalisation of India’s film industry in recent years has been remarkable. In the book’s introduction, Rocky S who has worked on over 200 films since his career began in the 1990s recalls how when he started out as a costume designer – it was normal for the director ask to make him an ensemble overnight. He says there was there was no real budget; he world have to haggle over payment after the shooting was finished. Today, Bollywood productions allocate a dedicated budget for costumes and full departments for wardrobe and costume.