Runway roundup: These were the best shows at Lakme Fashion Week Summer/Resort 2019

Style
Runway roundup: These were the best shows at Lakme Fashion Week Summer/Resort 2019
Share this article
Next article

With Lakme Fashion Week wrapping up recently, we saw a number of budding designers with novel ideas and some veterans re-imagining classics. Here are a few shows that made a mark. 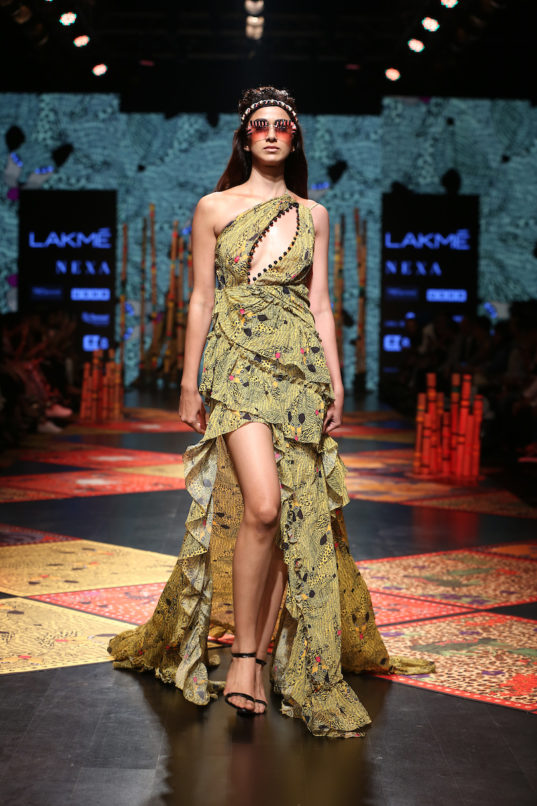 Known for their breezy silhouettes and edgy cuts, designer duo Shivan and Narresh showcased their collection titled ‘Patu Series’. A nod to India’s cultural past, the silhouettes celebrated six new prints – Panthera, Sunderbans, Iconorosh, Fagun, Urvi, and Deccan, inspired by indigenous art forms from the Bengal, Odisha, and Andhra Pradesh belt. The colour palette, comprising amber, indigo, slate, and ruby among others, featured on floor-sweeping gowns and statement swimwear, perfect for a destination wedding. There was menswear as well – robe suits, sweats, and quilted Nehru jackets paired with kurtas.

“Patu Series has been envisioned as a stimulating experiential residue of our travel sojourns across the rich geography of India, particularly Bengal and Andhra Pradesh, and its prosperous art forms,” says Shivan Bhatiya, head designer. “The elaborate pictograph and illustrative recital of mythological stories through homegrown craft has inspired the prints of the season.” 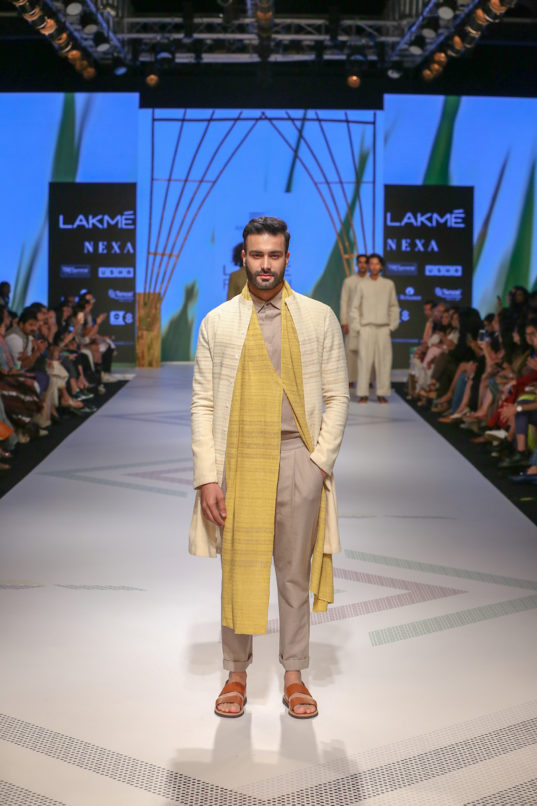 Known for making the fabric the hero, Ujjawal Dubey showcased his collection for Antar-Agni in collaboration with Raymond. Combining the beauty of handspun textiles sourced from small clusters in Rampur with neat tailoring skills created a blend of traditionalism and modern silhouettes. The artisans used traditional hand-weaving techniques to create beautiful fabrics from silk fibres like eri, muga, and matka, which were the focal point of the collection. “It has been a challenge and an amazing experience to work with textured, handspun, handwoven silks from the Assam cluster, with support of Raymond that has a strong vision and belief in such grassroot projects, and GoCoop, an organisation that helps get a platform for the clusters,” says Dubey. “The collaboration in itself is an interesting mix of various organisations and their belief systems.” 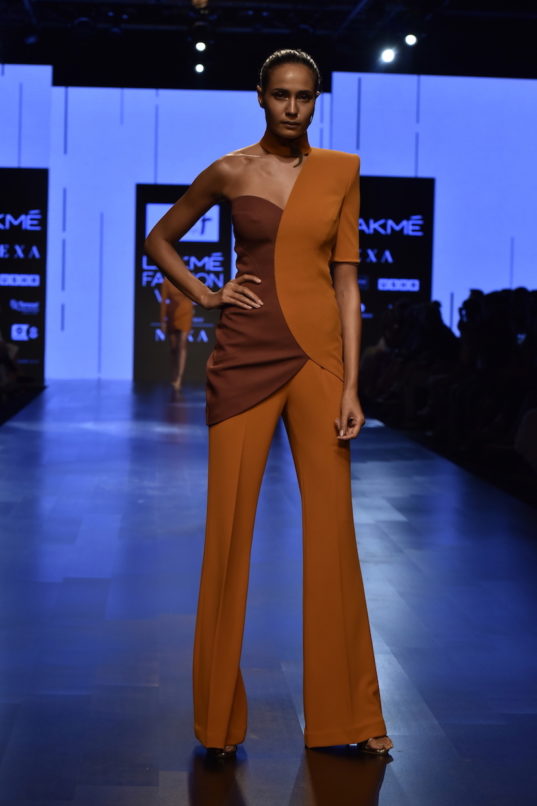 Thampi interpreted the meaning of a semicolon through his clothes, the simple comma and dot used to depict the irregularity of life. The line also aimed at portraying today’s multi-dimensional urban woman who is confident in her skin. Thampi remained loyal to his signature aesthetic and rolled out pieces depicting contrast – he juxtaposed the angular with curved panels, matte with shine textures, solid colour schemes with patterns.
Bobo Calcutta For his latest collection, Blackout/Whitewash, Ayushman Mitra juxtaposed whites and blacks against an array of striking hues. To add further appeal, were a mix of dark reds, earthy greens, and bright yellows. Mitra used his trademark prints along with intricate beaded and sequinned embroidery. Adding to the visual drama were embellished patches entwined with rich, hand-done threadwork on digital prints. Menswear included oversized shirts, high-neck cropped tops, and shorts, while womenswear focused on ponchos, floor-length overcoats, and unconventional saree drapes. 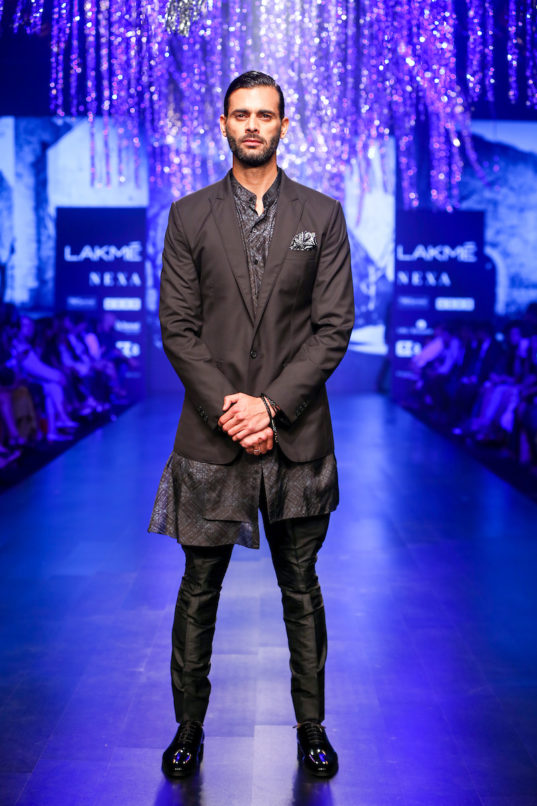 Known for his sleek, tailored menswear, Raghavendra Rathore paid homage to his classic Bandhgala in the show. He rolled out new renditions in hand-woven textiles featuring prominent use of silk and natural yarn, alongside textured sherwanis, white waistcoats, printed kurtas, and one-button, narrow-lapelled jackets with peaked lapels. The show also marked Rathore’s foray into womenswear – numerous black jackets in different lengths with the most exquisite embroidery appeared on the catwalk, along with long, floor-sweeping skirts. 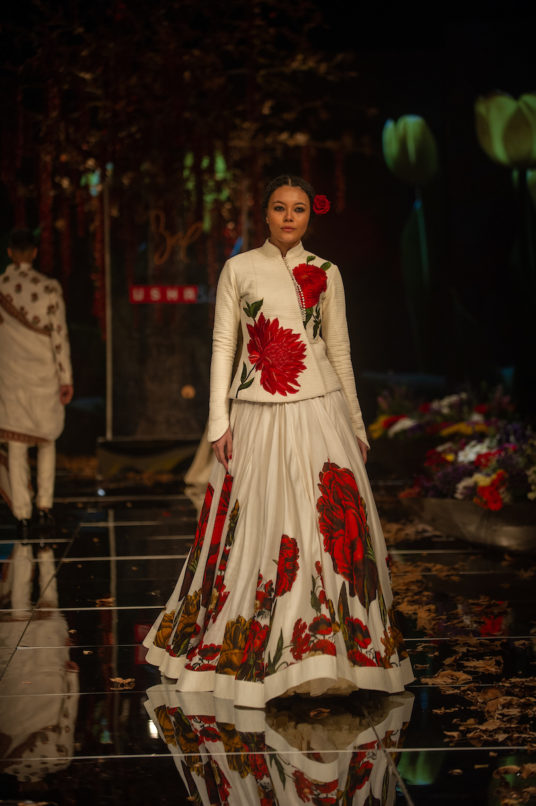 Lakme Fashion Week Best shows Rohit Bal Nikhil Thampi Bobo Calcutta Raghavendra Rathore
Anupam Dabral
Sr. Associate Editor
It was while studying fashion journalism at London College of Fashion that Anupam developed a keen interest in the anthropological aspect of the discipline; for him, fashion only makes sense when seen in the context of its environment. He is always on the hunt for great stories, and in his spare time binge-watches films/shows starring Whoopi Goldberg, Dawn French and Jennifer Saunders.
Fashion Jewellery Style

Style
Tissot’s new SuperSport Chrono is an absolute sportsman’s special
Style
Biskit: A unisex Indian fashion label focused on breaking stereotypes
Gear
Checklist of smartphone games you need to survive social distancing
Beauty & Grooming
Why having a good beauty routine before a Zoom meeting is important
Culture
Not everything is under lockdown: Add to your skillset with these online courses
Style
Self-isolation but make it fashion: This is how celebs are staying stylish
Gear
You can now experience virtual theme park rides from home
Style
Breitling limited edition: James Bond’s Top Time chronograph returns
Beauty & Grooming
#Firstperson: How I finally conquered my fear of red lipsticks
Sign up for our newsletters to have the latest stories delivered straight to your inbox every week.

Priyanka Chopra Jonas set the runway on fire at the Blenders Pride Fashion Tour finale show, ‘The Pride of India’