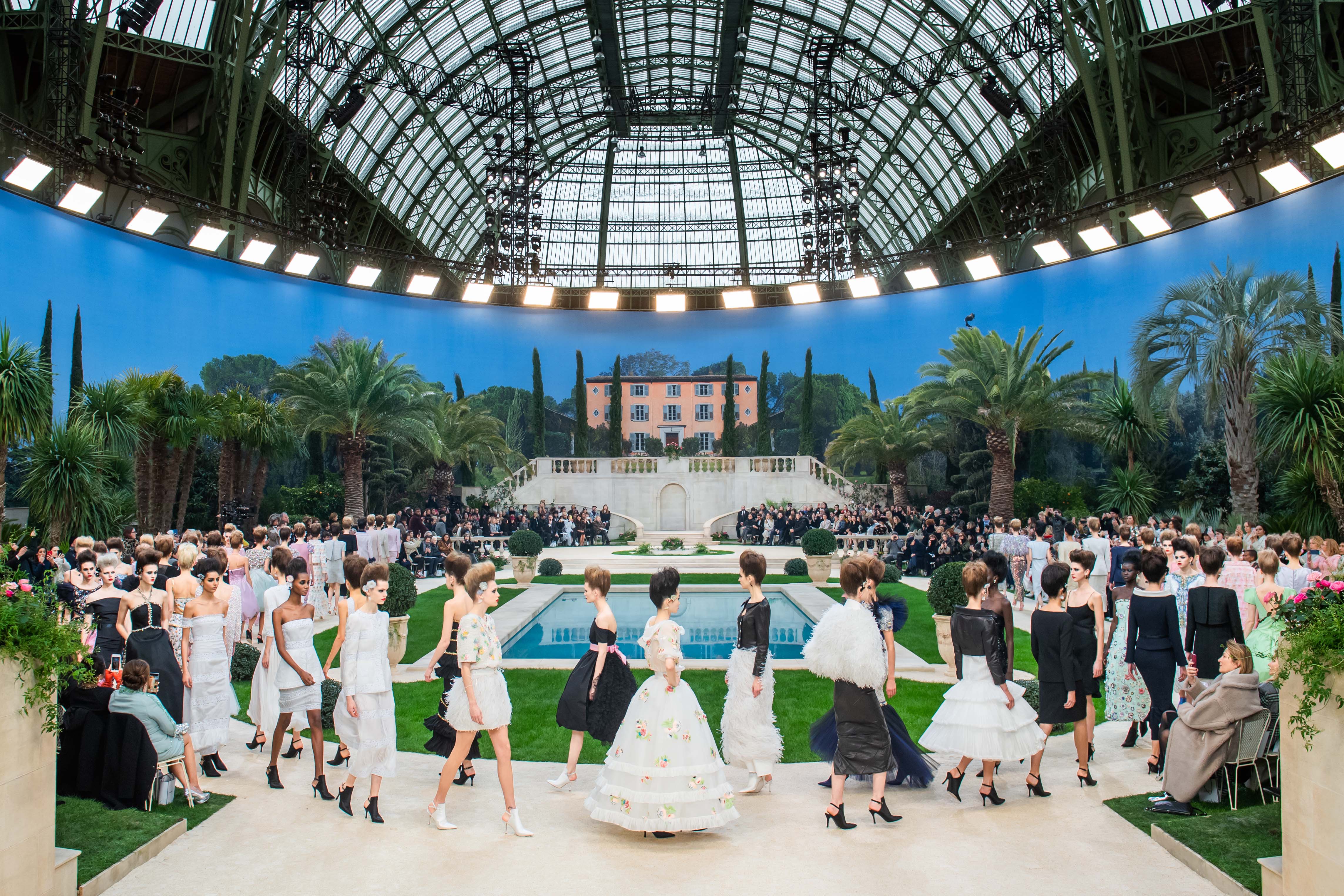 Tweed, tulle and taffeta: Day 2 at Paris Couture Week was packed with everything sleek

While Armani celebrated old-school glamour in his 86 ensemble couture show, British designer Clare Waight Keller looped in latex among her finest of runway pieces. However, the highlight was Karl Lagerfeld not taking the final bow post his tweed loaded couture presentation.

Scroll down for highlights of day 2 to know more.

When you are an 85-year-old polymath, designing multiple collections a year for more than one brand,  fatigue gets you. Karl Lagerfeld who has never been a shy recluse was absent from his latest couture show. But his master strokes manifested  through his evergreen tweed dresses and skirt suits. Staged against a backdrop resembling a charming Italian villa  with a grand pool Lagerfeld rolled out the best of Chanel specimens; well-fitted jackets and pencil skirts made in tulle, lace and chiffon. Taking hints from street style, there was a cropped biker jacket paired  with a tulle panelled skirt, pastel tweed dresses and intricately done cocktail dresses. Among all this we got to soak in the authentic Chanel couture; there were hand painted flowers embroidered together, ample amount of feathers and sequin that  brought the collection together. Among his entire set of soft-on-eye silhouettes, Lagerfeld conjured up some vintage vibes  with his signature black and white short suit, blazer dresses. Lagerfeld’s brides have ranged from Claudia Schiffer, Devon Aoki, Linda Evangelista, Alek Wek, Kendall Jenner to Sudanese – Australian model Adut Akech; and have adorned sneakers with gowns and trains with pantsuits. This time it was Model Vittoria Ceretti, walking for the finale channeling a swimwear bride, all decked up in a cutout monokini with sequins and floor-sweeping veil. To close the show, Lagerfeld ensured that his longtime studio director Virginie Viard took a bow.

Timeless  elegance – that’s how one can sum up Giorgio Armani’s latest couture  presentation. Staged in  Hotel d’Evreux in the Place Vendome, it was all about shimmer, the very signature Armani colour scheme and hints of art  deco. Sculpted suits, jackets with power shoulders, skirts flared at  the hems, sequinned jumpsuits, fringe dresses and hats were the  highlights of Armani’s couture show. Over the years, his ability to  create a perfect concoction of tulle, leather, chiffon and fur has resulted into a number of iconic red carpet moments and to following the  trail were Uma Thurman, Michelle Dockery, Dakota Fanning, Juliette  Binoche and Celine Dion.

After creating, what many are referring to as the dress of the century; Meghan Markle‘s wedding gown, Clare Waight Keller returned to the couture runway with her signature silhouettes. Over the years, Keller’s sense of sculpted silhouettes has evolved and the  opening look resonated that;  a pair of black  latex leggings  paired with an exquisitely tailored jacket. What followed were, modern  and slick blazers, flared floor-sweeping skirts, see-through gowns with  floral 3-D applique work, head-to-toe fringed dresses. Amidst all these  intricate details what stood out was Kellers take on latex. The material  was seamlessly paired with gowns and several cocktail dresses. Givenchy  might have gone though a luxe-goth phase under  Riccardo Tisci but this new wave of ‘sleek-chic’ led by Keller is steering Givenchy towards an interesting future.

Karl Lagerfeld Chanel Givenchy Giorgio Armani Haute Couture High Fashion Clare Waight Keller Givenchy
Anupam Dabral
Sr. Associate Editor
It was while studying fashion journalism at London College of Fashion that Anupam developed a keen interest in the anthropological aspect of the discipline; for him, fashion only makes sense when seen in the context of its environment. He is always on the hunt for great stories, and in his spare time binge-watches films/shows starring Whoopi Goldberg, Dawn French and Jennifer Saunders.
Fashion Jewellery Style

Gear
LSA Picks: Gamers, these are best Rockstar Games to bundle up on
Weddings
#Trending: 6 cool new ways brides can wear braids in 2020
Food & Drink
Everything you need to know about plant-based milk alternatives
Food & Drink
”It’s trifle time!”: Learn the best recipes from the ‘Friends’ cookbook
Weddings
Lehenga 2.0: Edgy lehenga inspiration for millennial brides in 2020
Travel
From Arctic to Antarctic, this cruise is on top of our post-coronavirus travel bucket list
Weddings
Opinion: Wedding designer Devika Narain on the future of the big, fat Indian wedding
Style
The most extravagant watches your favourite athletes are sporting today
Culture
One of Christopher Nolan’s films is going up on video game ‘Fortnite’
Sign up for our newsletters to have the latest stories delivered straight to your inbox every week.

Own gowns worn by Beyoncé, Jennifer Lopez, and Cardi B for charity

How fashion & beauty brands stepped up during the COVID-19 crisis