Exclusive: Anaita Shroff Adajania and Farah Khan on what makes KJO a trendsetter

This month, we are celebrating director, producer, actor and television personality Karan Johar’s metamorphosis into a fashion icon. He’s Lifestyle Asia India’s February cover star, and we have got two of his close friends, ace stylist Anaita Shroff Adajania and filmmaker and choreographer Farah Khan to share their opinion on Karan Johar’s eye-catching fashion statements.

Karan Johar and Anaita Shroff go long back. The two even did minuscule roles in the iconic Dilwale Dulhania Le Jaayenge. From being co-stars to becoming close friends to working on massive projects together, the two have had quite the journey. Anaita has seen Karan in all his phases, and here’s what she had to say about her filmmaker friend.

“Karan is the epitome of ‘standout style’. His unique penchant for marrying street style with custom-made never fails to make a statement. We go back a long way (more than we’d like to divulge) and from the days I have known him, he’s gone through a sea change transformation, (I call him) a “fashionbeasta”. And I’m saying this in the most complimentary way possible. He’s unapologetic with his desire to experiment. He’s often ahead of the curve with a pulse on picking out emerging talent and styles before they go mainstream. I think his interest and passion for fashion is almost as much as it is for a film! Fearless and ready to do anything and everything he desires – he’ll strike a pose, find his angle … pout and baaamm! He really doesn’t care what anybody else thinks because he knows he looks and feels amazing the way he wants to be, and that is what I love about my darling trendsetter Karan.” 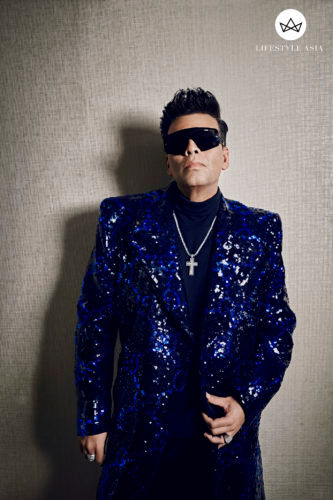 Farah Khan and Karan Johar have also been a powerful pairing. From Kuch Kuch Hota Hai to their television reality shows, they have delivered multiple blockbusters. Their latest blockbuster however is on social media. Farah and Karan’s videos of trolling each other’s clothes go viral in minutes.

So when we asked Farah to comment on her friend’s style, she laughed and said, “Let me tell you how Karan perceives his own style. He thinks he’s a fashionista and the clothes he wears are fabulous, but sometimes I think they are OTT to another level. The bling on his shoes, the bling on his clothes, the fully monogrammed looks… he becomes the House Of Gucci himself. I’m also shocked when I learn how much his clothes cost. You can buy a car for how much he spends on one outfit. Having said that, he definitely has a fun sense of fashion and it’s quite brave of him to wear what he wears. He loves fashion, he lives for it, and now he’s thin enough to get into these clothes, so why not I say!”

Rahul Gangwani has been an integral part of the media & entertainment industry for over a decade now. When not eyeing the latest in films and fashion, he loves spending time with his adorable puppy, making travel plans and looking for the newest restaurants in town.