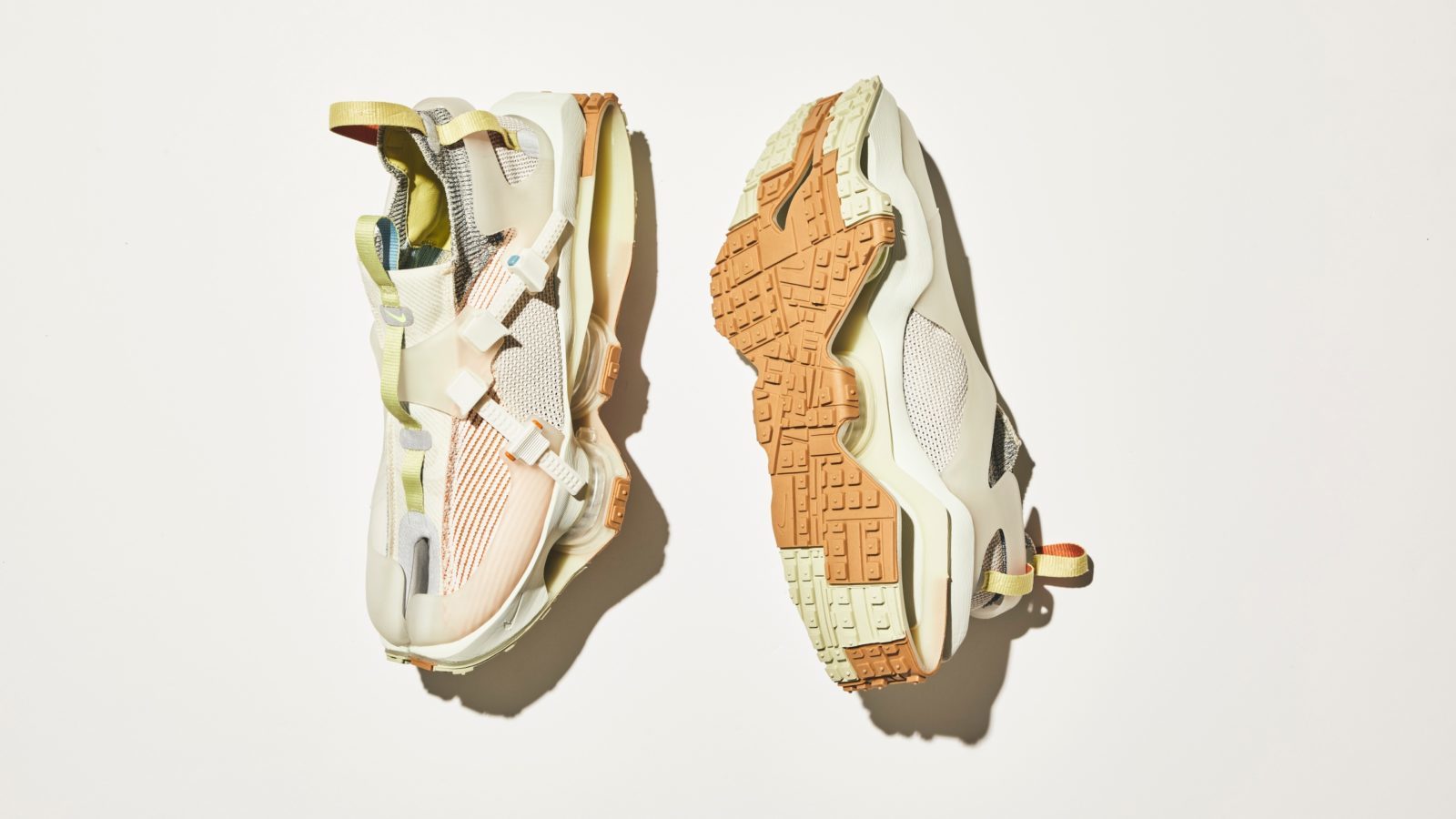 This August, we are looking at some of the best, under-the-radar sneaker drops to garner skyrocketing prices and attention.

Nike has officially climbed to the top of The Lyst Index of this year’s hottest brands, so it’s no surprise that the majority of the most hyped sneaker picks this month fall under the Nike umbrella.

Releasing its quarterly ranking on the world’s leading brands, The Lyst Index is a survey of the online shopping behaviours of more than nine million users a month. For Q2, Nike climbed two places and came out on top, reporting a 75 per cent increase in digital sales. No doubt Nike’s highly sought-after Air Jordan x Dior collaboration sneakers, released last month, would have contributed a fair share of social impressions.

More importantly, in just the span of a few months the fashion industry has been learning to quickly adapt to not only the impact of coronavirus but increasingly critical calls for social justice and racial equality since the death of George Floyd. More than ever, what you wear has been tied to what you believe in, and Nike has not just adapted but remained at the forefront of this charge. Much like other brands topping the Lyst Index this quarter that are taking similar steps, Nike has pledged US$40 million to organisations furthering social justice and continues to innovate in its ways of giving back to its communities as well as to the global environment.

For a list of this month’s hottest releases? Let’s delve in. 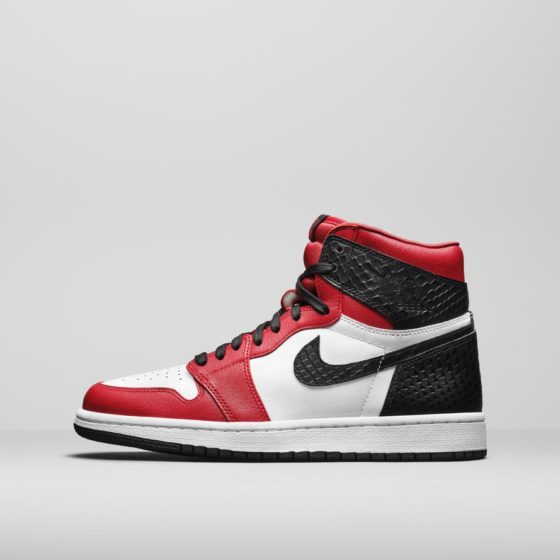 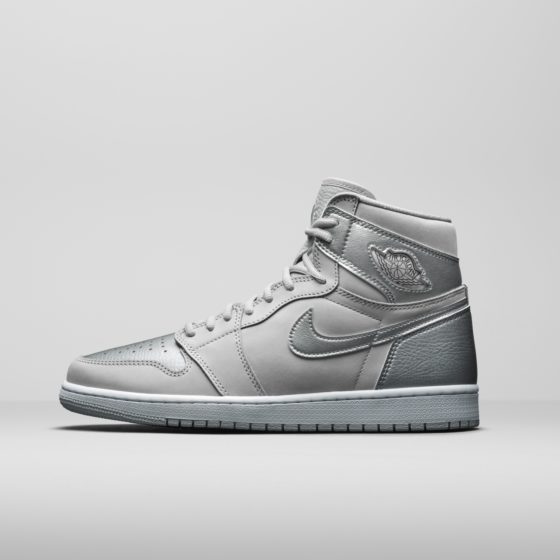 This metallic silver high-top special edition marks the return of a retro, Japan-exclusive colourway that was dropped on 1 January 2001. Nike has brought the shoe back with two different releases this summer: The first, a Japan-exclusive, was launched on 25 July, packaged in a premium silver suitcase, with an ultra-limited release numbered one to 2020. A second round is slated for general release on August 7 and won’t be packed in the suitcase, but fans who get their hands on this can still expect a number of easter eggs in the collectable design — from shoebox paper to an inner tongue label printed with dates commemorating the original shoe. 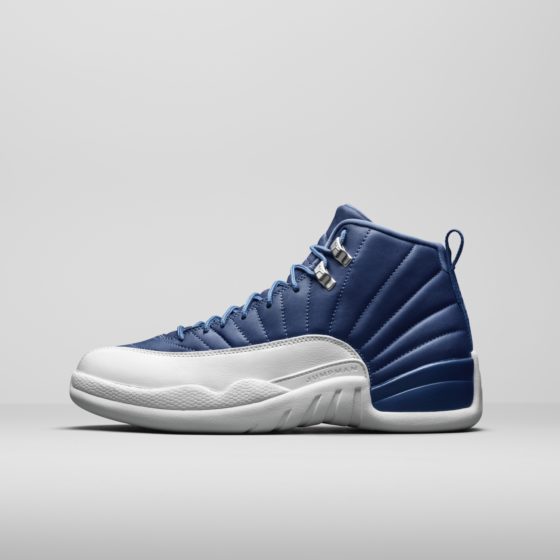 First debuted in 1997, the Air Jordan 12 is the first shoe of the line that didn’t feature outward Nike branding, including the iconic swoosh or simply ‘Nike Air’ in its insole that was included by its predecessors. Its design was also initially inspired by the Japanese ‘rising sun’ flag, and aptly, this August release harks back to its roots with the use of Japanese indigo and wabi-sabi aesthetic. The ‘Indigo’ colourway is dressed in stone blue, legend blue and obsidian, featuring an upper that will fade in time, said to a reveal a unique design underneath. The genuine leather upper has been dyed with indigo, which is among the oldest dyes to be used for textile dyeing and printing. Hence, no two pieces are alike. The shoe comes with a card that reads: “The Beauty of Imperfection, Fades to Perfection.” 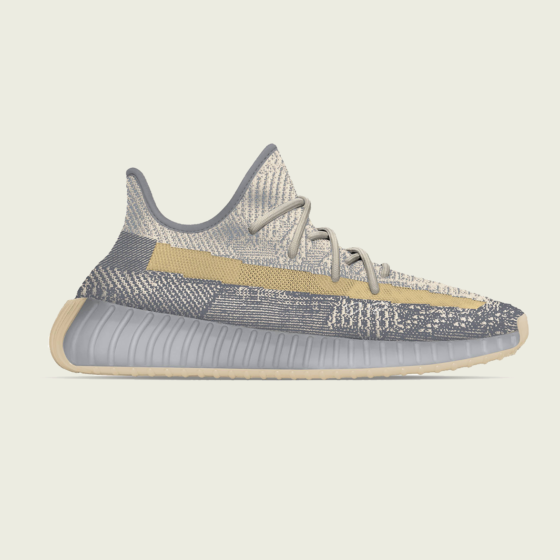 Despite the controversy garnered by founder Kanye West in the past month after he announced his participation in the 2020 US presidential race (followed by a public display of his battle with mental health) fans and supporters will agree that the Yeezy line, coupled with his original music, remain testaments to the billionaire’s success. At least, the shoe’s cult status can be owed to the Yeezy 350 silhouette which continues to improve with every release. Initially meant to come out in June this year, the ‘Israfil’ drop was officially pushed to 22 August, which has only increased the anticipation for Yeezy collectors. The tan and light grey colourway is named after the angel of music — depicted in biblical events as the angel who blows into the trumpet to signify Judgement Day. 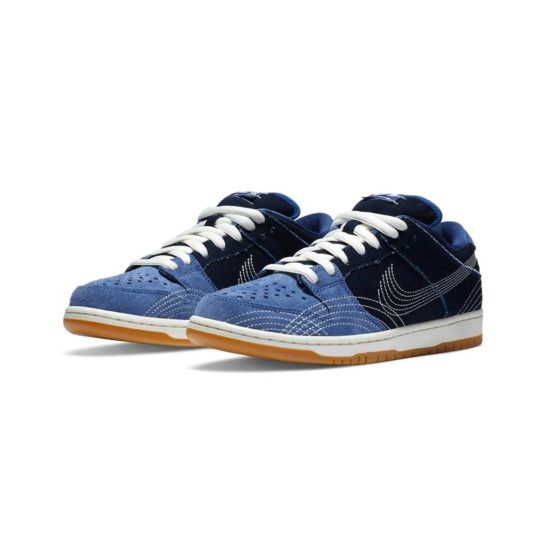 Released in Europe on 1 August, the skate shoe ‘Sashiko’ is named after an ancient Japanese embroidery technique involving ‘little stabs’ — which has been used in garments dating back to the 1600s. Together with the Kyrie S2 Hybrid and the SB Blazer Mids, the SB Dunk Lows are part of a trio pack that all feature this special Japanese sewing method. It’s currently sold out at Nike, but you can find it at various online retailers such as StockX.com. This autumn, a slightly different athletic collaboration is brought to us by Converse with the classic silhouette by World Champion badminton player Jack Purcell reinvented by prolific Chinese designer Wang Fengchen. Originally launched at London Fashion Week earlier this year, the shoe is releasing in two colourways, ‘Black’ and ‘Sea Salt,’ along with an apparel and accessories line. The shoe design draws inspiration from Wang’s Chinese heritage with her name sewn across the upper of the shoe in Chinese characters, made with layers of PU-coated nubuck leather. 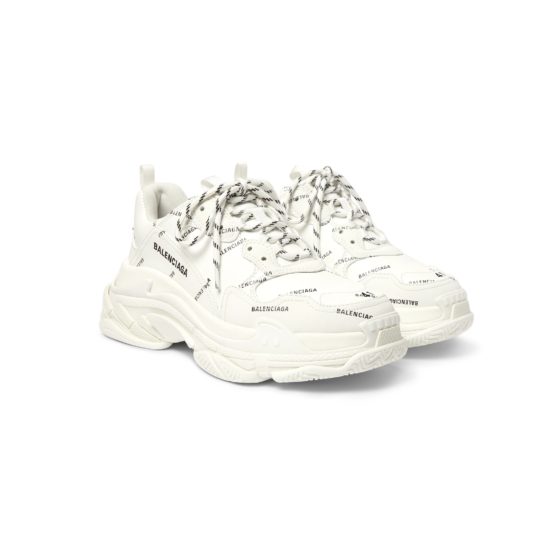 Since early 2015, the hybridisation between athletic and luxury sneakers has been an ever-growing trend, and one of the most influential styles is none other than Balenciaga’s Triple S Sneaker. Worn by celebrities, models and influencers alike, it’s no doubt chalking up to be one of the top shoe silhouettes of the decade. In a recent report by e-commerce site StockX.com, it represented 52 per cent of luxury sneaker sales in 2017. This summer, on top of new sneaker silhouettes, Balenciaga also unveiled three new colourways of its enduring Triple S sneaker, featuring an ‘All Over’ logo print in white, red and black-and-neon iterations. 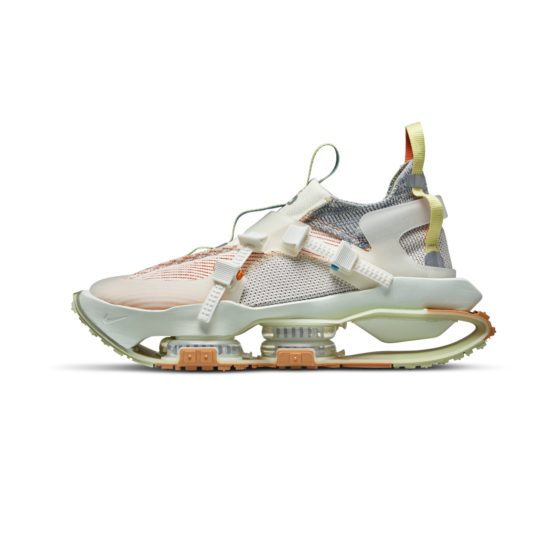 Referred to by sneakerheads as ‘The Craziest Nike Sneaker Ever’ or ‘The Concept Car,’ this futuristic shoe was designed by Nike’s innovative tech arm ISPA, which stands for ‘Improvise, Scavenge, Protect, Adapt.’ Part of a repertoire of five sneakers released this summer, the ‘Road Warrior’ is a shoe that wouldn’t look out of place in a sci-fi movie, utilising all the best technology innovations made for basketball, running, training and outdoor footwear. It features an open floating heel made to withstand marathon pavement pounding, and an upper that takes its cue from tough outdoor training shoes that offer agility, protection and breathability. Essentially the shoe is a hybrid of previous landmark creations, made to tackle any futuristic urban terrain. The collection of ISPA sneakers launched earlier in July, also came with a range of apparel that was designed with the same principles in mind. Sold out since its global release on 10 July, you can still catch the shoe on various online retailers. 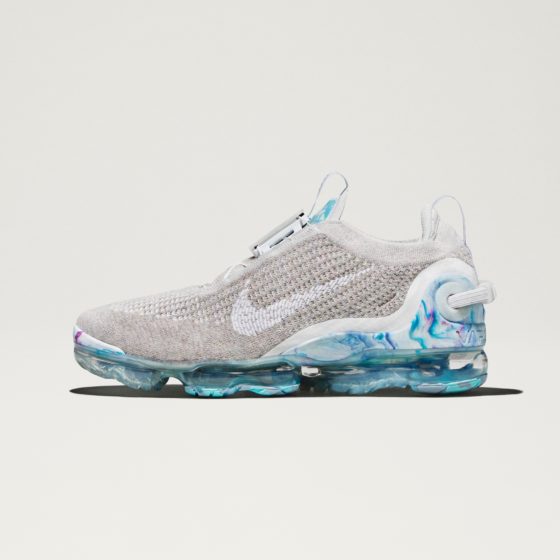 Expanding on the principles of Nike’s Space Hippie, Nike brings us the Vapormax 2020, which is made from at least 50 per cent recycled materials and continues to bring the brand’s innovations in circular design into the mainstream. Aside from a Flyknit upper, heel clip, toe tip and Air sole made out of recycled materials, the shoe also integrates Nike’s FlyEase lacing innovation, described as “a one-handed lock-and-release mechanism” that instantly secures the entire foot. The shoe debuted earlier this summer in ‘Smoke Grey’ and ‘Pure Platinum’ but two additional iterations in ‘Deep Royal Blue’ and ‘Summit White’ (shown above) will be up for grabs on August 6. 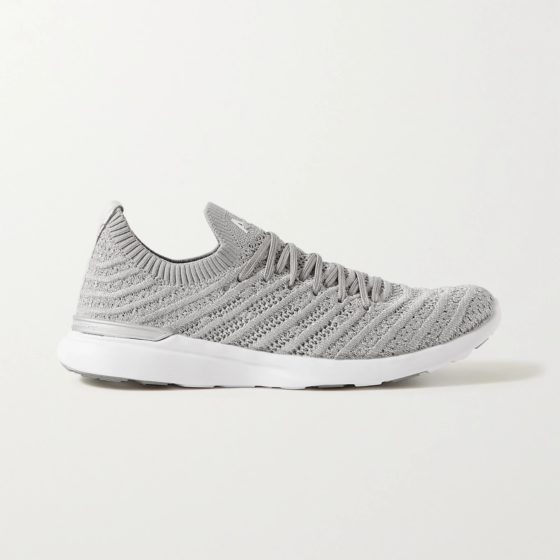 Athletic Propulsion Labs’ Concept 1 shoe was banned from the NBA in 2010 for being too effective — its ‘Load ’N Launch’ Technology was said to have provided too much of a competitive edge for its wearers. This might sound like a familiar story for Michael Jordan followers, where his OG ‘banned’ Air Jordan 1s have reached holy grail status for collectors. Since then, APL’s sneakers have quickly risen as one of the most comfortable, easy to match training shoes available. They’re popular with celebrities, worn by the likes of the Kardashians to Lady Gaga to Michael B. Jordan. Stuck at home during COVID-19 and hoping to gear up for your home workouts — or simply for regular hikes and walks around the block? These will be great as your new summer go-to’s. In addition to this grey pair on Net-A-Porter, you can also find men’s styles on Farfetch and Mr.Porter.