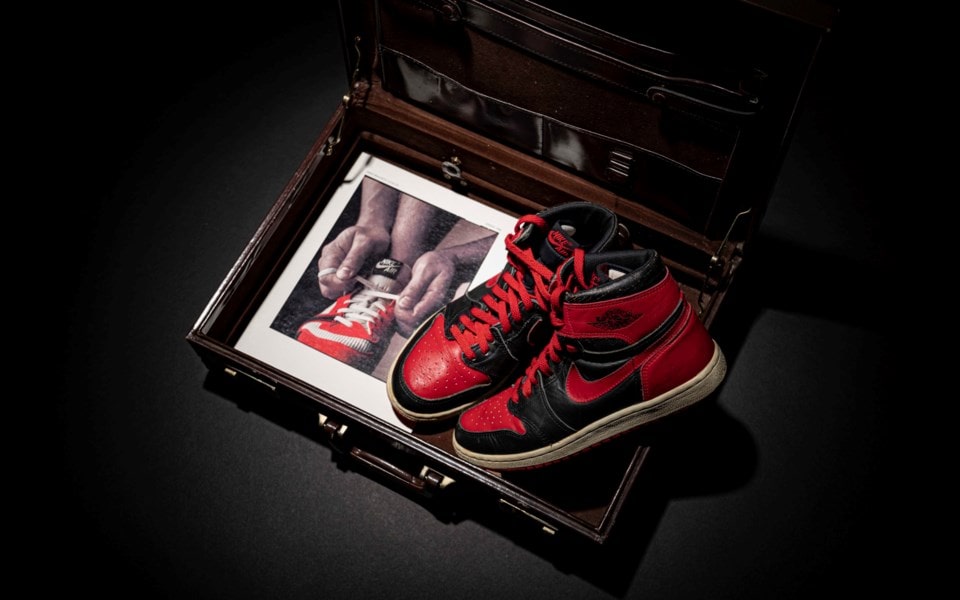 Once collected by just a handful of connoisseurs, sneakers have become genuine objets d’art in the space of a decade and are now regularly appearing in auctions. Almost a year after their first joint sneaker auction, Christie’s and Stadium Goods are back with a new event that focuses exclusively on Air Jordans, the world’s most iconic sneaker.

Entitled “Original Air Takes Flight: The Evolution and Influence of Air Jordan Sneakers”, this new sale, which the two organisers describe as “the largest sneaker auction ever held at Christie’s”, will be entirely devoted to the most coveted shoes of all time, the Air Jordans, which have largely contributed to making sneakers an object of desire.

At the end of June, the most affluent collectors — it will cost at least tens of thousands of euros to get one of the precious models — will be able to bid on rare, exclusive pairs, even prototypes, as well as sneakers worn by Michael Jordan himself and by some of his teammates and competitors during NBA games. Also included will be models worn by Team Jordan athletes, models from collaborations with artists, and even commemorative packs that should appeal to the biggest fans of the brand and the Chicago Bulls player.

The Christie’s auction itself retraces the history of the sneakers as well as the legacy of Michael Jordan, still considered one of — if not “the” — most influential sportsmen in the world. It is also about measuring the impact that Air Jordans have had for decades on sports, fashion, and more broadly on pop culture.

Among the most buzzed-about lots are exclusive pairs of sneakers worn by Michael Jordan himself such as the Air Jordan 11 Concord, the Air Jordan 12 Taxi, and the Air Jordan 13 He Got Game. There will also be models worn and signed by his teammates such as B.J Armstrong, or by some of his opponents like Charles Barkley. On another note, the sale will feature Jordan Brand collaborations with artists like Eminem and Drake, as well as coveted packs like the “Air Jordan 1 High Colette, Friends & Family Exclusive”.

Top pieces from the sale will be on display at Christie’s New York until June 9, while the sale itself will begin on June 22 with bidding through June 30. Note that nearly US$1 million (Rs 73,000,000) was brought in by the first auction in 2020.

For several years now, the sneaker resale market has been booming with models estimated at prices that boggle the mind. Recently, a pair of Nike Air Yeezy 1, worn by Kanye West, was sold for $1.8 million by Sotheby’s. An absolute record, which far exceeds the previous one held by Nike Air Jordan 1s, auctioned for $615,000 at the sale organised by Christie’s in the summer of 2020. More details about “Original Air Takes Flight: The Evolution and Influence of Air Jordan Sneakers” here.

Step up your menswear game with these cool, homegrown labels

Designers are using sugarcane in sneakers as a sustainable alternative