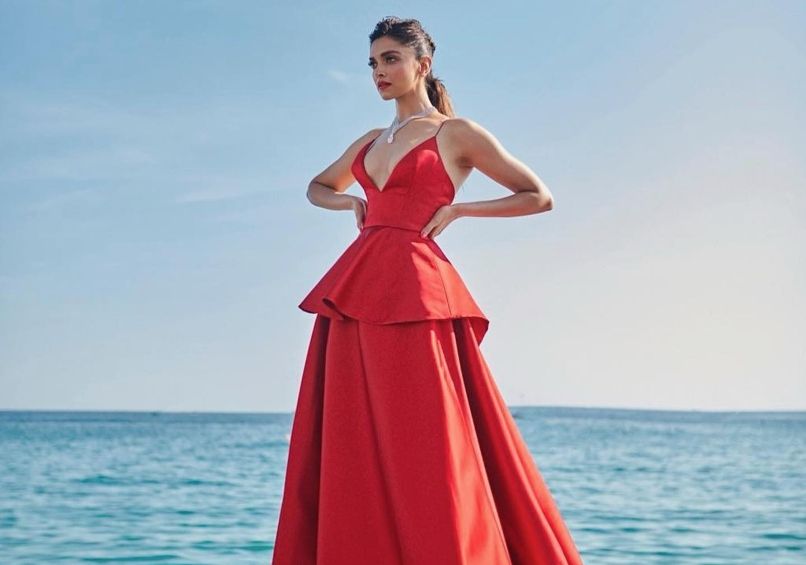 After making appearances at Cannes 2022 in Sabyasachi’s retro ensembles and ArdAzAei black pantsuit set, Deepika Padukone kicked off the Day 3 of the film festival in Louis Vuitton crimson gown. Styled by Shaleena Nathani, the actress’ outfit look straight out of heaven. She charmed everyone in the solid coloured silhouette with a statement neckpiece. And tied her hair up in pony tail.

Deepika took to even took to her official social media handle to share a few glimpses of her OOTD. In her caption, she tagged Louis Vuitton, Nicolas Ghesquiere, Cartier and Cannes Film Festival’s official page.

Prior to her gorgeous red attire, The Gehraiyaan actress exuded boss babe vibes in ArdAzAei black pantsuit set. Her overall look comprised of a pair of high-waist black trousers and a blazer which opened into a flared hem. Take a look at her pictures.

Ever since the opening ceremony of the 75th Cannes Film Festival, Deepika is slaying in one look after the other. She even walked the red carpet in a vintage Sabyasachi Bengal Tiger couture. The actress’ striped sari embellished with sequins was a part of  the iconic Aakash Tara collection by the ace designer.

She dropped a few pictures while posing in the drape and wrote, “The sari is a story I will never stop telling. No matter where we are in the world, it has its place” said Sabyasachi Mukherjee…and I couldn’t agree more!”

While, we are eagerly waiting for the actress’ next look, catch a glimpse of her appearances at Cannes 2022 so far.

Over the years, Deepika has been a regular attendee of the Cannes Film Festival representing beauty brand L’Oreal. But this time, she is attending the event as a jury member. She is one of the eight people including Rebecca Hall, Noomi Rapace, Asghar Farhadi, Joachim Trier, Ladj Ly, Jeff Nichols and Jasmine Trinca, who will elect the winner of the awards.

Apart from her, a number of Indian celebrities are set to walk the red carpet at the 75th Cannes Film Festival. Popular faces from India like R Madhavan, AR Rahman, Nawazuddin Siddiqui, and Pooja Hegde, among others will be seen at the event.

Cannes Film Festival Deepika Padukone Deepika padukone fashion Deepika Padukone Cannes Cannes 2022
Sanyukta Baijal
Apart from scrunched up paper with recycled aspirations, Sanyukta is also a writer. When not reading or scribbling, she loves playing copious amounts of video games and watch tons of films.
Sign up for our newsletters to have the latest stories delivered straight to your inbox every week.