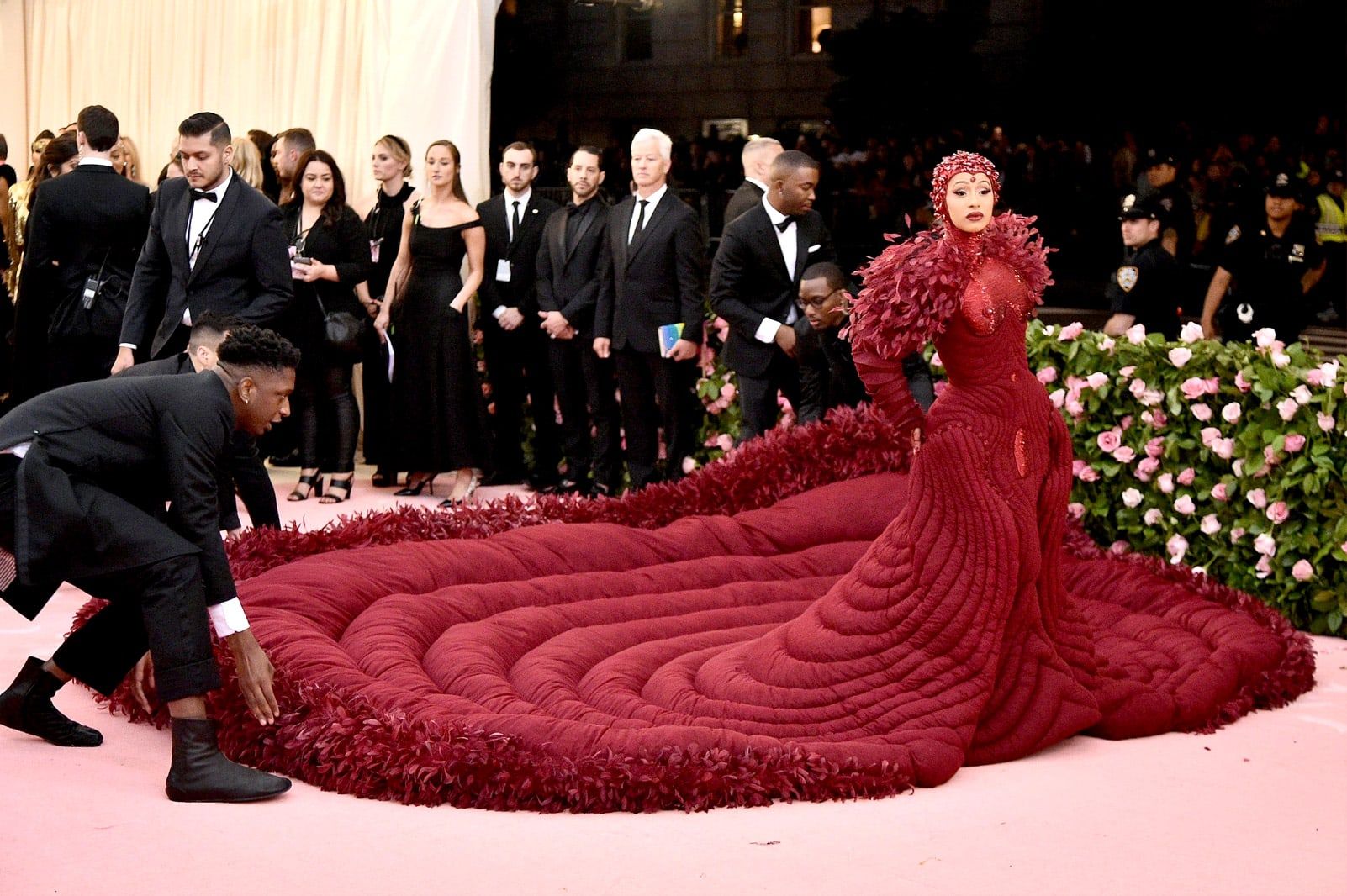 How can we ever forget Lady Gaga’s grand Grammy entrance of 2011? London-based designer Hussein Chalayan and the House of Mugler got together to create that memorable look which resulted in Gaga taking over the red carpet carried by a mini-army of men. Met Ball 2019 saw some similar moments. Of course, there was pomp and show and nothing was off the inspiration wheel for designers. ‘Camp‘ being the cue, Moschino rolled out a chandelier for Katy Perry, our very own Deepika Padukone was seen in a Barbie-esq Zac Posen couture gown, and Kim Kardashian pulled out a vintage Mugler piece. But this Met saw more than fashion; it was about theatrics, live performances on the red carpet, and multiple costume changes.

Billy Porter is a true theatre artist and he loops his craft in even when taking over the red carpet. In the past we have seen him shutting it all down in a custom Christian Siriano number, but this time he closely worked with New York-based The Blonds to create his heavily embellished jumpsuit, the wide-spanning gold wings, and the jewellery.

Reminds us of many a mehndi brides making an entrance…. Is that too Camp? This sure is. #BillyPorter #MetGala2019 #NewYork #Fashion

It was, however, his entrance that became a talking point. He was carried to the red carpet by six men, all appearing to be a part of his costume-act. The entrance also conjured up the memories of Madonna’s 2013 Superbowl entry, which was similarly inspired by Egyptian mythology. Porter’s look was inspired by Diana Ross in the 1975 movie ‘Mahogany’.

Posing confidently in Brandon Maxwell, Lady Gaga gave us not one but four costume changes. In a live performance, which started from 84th and Madison and lasted to steps of the Metropolitan Museum of Art, Gaga was accompanied by five dancers.

First she wore a massive ball gown, followed by a black dress, after which came a pink column number, and finally the big reveal was Gaga in crystal bra and matching underwear.

The act seemed to be a tribute the Hollywood and Broadway classic Marry Poppins.

Cardi B in Thom Browne

When your Met Ball costume needs a 10 person entourage, it means you’ve made it. Last year, Cardi B wore a larger-than-life white Moschino ensemble, but it was this year that the rapper pushed the boundaries and how. There are trains and then there was Cardi B’s massive quilted and feathered one by Thom Browne; at hand were a bunch of assistants helping Ms B pose. Reminded us of Rihanna’s yolk yellow train created by Guo Pei.

The man in the mask #EzraMiller is the epitome of camp on the #MetGala red carpet. #MetCamp

This grand entrance may not have had an army of shirtless men but the impact was the same. The star of ‘Fantastic Beasts: The Crimes of Grindelwald’, Ezra Miller took to the red carpet with a face mask in his hand and eyes painted on his face, walking the Met Ball stairs like a veteran.

A glowing @zendaya Cinderella floats up the red carpet. (But she lost a glass slipper along the way!) #MetCamp #MetGala #Zendaya

It did not come as a surprise that Zendaya opted for an outfit by Tommy Hilfiger, but it wasn’t just a costume. It was a work of art, fusing fashion and technology. Hilfiger worked with a team of engineers to ensure that the glowing gown stole the show at the Met – a perfect Cinderella moment for Zendaya.

Lady Gaga Red Carpet Fashion Cardi B Billy Porter Met Ball 2019 Lady Gaga fashion
Anupam Dabral
Sr. Associate Editor
It was while studying fashion journalism at London College of Fashion that Anupam developed a keen interest in the anthropological aspect of the discipline; for him, fashion only makes sense when seen in the context of its environment. He is always on the hunt for great stories, and in his spare time binge-watches films/shows starring Whoopi Goldberg, Dawn French and Jennifer Saunders.
Fashion Jewellery Style
Sign up for our newsletters to have the latest stories delivered straight to your inbox every week.