Home > Style > Fashion > A tale of two cities: The lowdown on the Marrakech-inspired Dior Cruise 2020 collection 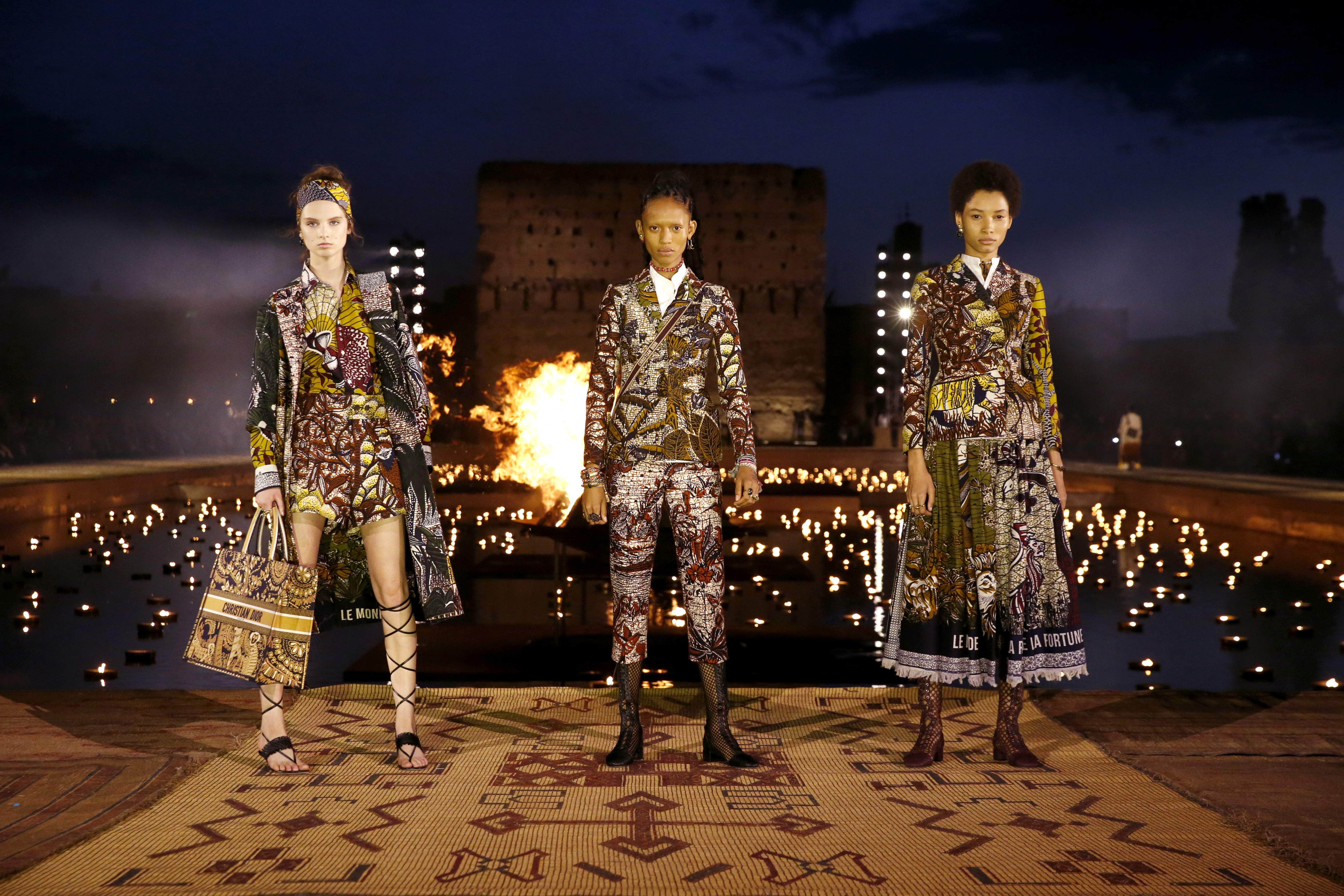 A tale of two cities: The lowdown on the Marrakech-inspired Dior Cruise 2020 collection

Style
A tale of two cities: The lowdown on the Marrakech-inspired Dior Cruise 2020 collection
Share this article
Next article

Held in Marrakech, Morocco, the Dior Cruise 2020 show was more than just a spectacle. Among the larger than life sets and music, the undertone was clear – today fashion is all about celebrating culture instead of appropriating it. The storied Parisian house and Marrakech have shared history. From the Marrakech-inspired 1951 white tulle dress and coat with silver embroidery created by Christian Dior, to repetitive references of the city in the eclectic showcases of John Galliano, to Yves Saint Laurent’s Marrakech Coat that he designed for Dior in 1960, creative directors have time and again expressed their appreciation for the city. And the latest one to do so is Maria Grazia Chiuri.

Art and culture have always been a mainstay in her collections, and Chiuri has ensured that fashion is understood in its context. Marrakech came as a vibrant source of inspiration. Cultures world over fuel imagination, and design helps overcome any differences bringing artists, poets, writers and eternal adventurers together. Chiuri’s latest offering proved the same.

“Culture teaches us to live together, teaches us that we’re not alone in the world, that other people have different traditions and ways of living that are just as valid as our own” This quote by Tahar Ben Jelloun, a celebrated Moroccan writer, served as inspiration for Chiuri.

Here is everything you need to know about the exquisite showcase

1. Chiuri consulted with French anthropologist Anne Grosfilley on the collection. To create the authentic Mediterranean vibe, wax print fabric, which is signature of the region, was experimented with. Grosfilley studied its complex origins and evolution – how it journeyed from Europe and Asia, extending into Africa. Chiuri, in order to fit the fabric into her collection, collaborated with Uniwax factory and Studio (in Ivory Coast). A special edition of the fabric (toile du jouy) with Dior codes reintegrated in the weaves was created with motifs of landscapes and tarot cards.

2. Chiuri further translated these prints onto suits, pleated skirts, and trousers made in ecru silk, silk gauze, and shantung in the hues of sand, indigo and rustic, burnt red.

3. The collection was a collaborative effort. Besides collaborating with Uniwax, Chiuri also looped in Pathe Ouedraogo, popularly known as Pathé’O, an African designer who is celebrated for his shirts in vibrant prints. He even designed for the late Nelson Mandela, and through Dior’s latest showcase he once again paid tribute to the late African leader by creating a special shirt.

4. British designer Grace Wales Bonner, who references Africa often in her work, and African-American artist Mickalene Thomas, created their version of a New Look classic, the Bar Jacket for the show. Thomas had also collaborated with the House of Dior on the 2018 edition of Dior Lady Art. Dior’s official milliner Stephen Jones along with a team comprising of Martine Henry and Daniella Osemadewa created immaculately draped headpieces.

5. For the scenography, Chiuri collaborated with Sumano, an association that aims to revive the traditional women’s crafts of Moroccan tribes, notably painting on pottery, the art of weaving and vegetable dyeing.

Actress and businesswoman @JessicaAlba has been spotted amongst the #DiorCruise 2020 show’s guests. In a Autumn-Winter 2019-2020 ‘toile de Jouy’ printed tulle jumpsuit and skirt designed by #MariaGraziaChiuri, she discovered the meaningful creations by our Creative Director – a celebrations of cultures’ similitudes in a quest of a worldwide common ground, from Europe to Africa passing through Asia.⁣ #StarsinDior⁣

6. Staged at the historic El Badi Palace in Marrakech, it show comprised of 114 looks. The ambiance was elevated by the soundtrack of traditional Jajouka musicians and British electronic band The Orb. The front row was lit with Oscar winner Lupita Nyong’o, Jessica Alba, Karlie Kloss, Shailene Woodley, and several other Dior loyalists. The after-party saw Diana Ross performing.

Built in the 16th century, El Badi Palace, the setting for the #DiorCruise 2020 show by #MariaGraziaChiuri in Marrakesh, is considered a jewel of Islamic architecture. Restored to its original splendor, the site boasts over 300 richly decorated rooms, a vast courtyard, central pool, and lush gardens. Stay tuned for more teasers on the event on our Instagram Live! #DiorCommonGround © @Raphael_Dautigny

7. The show was a tribute to YSL’s designs of the 60s, which referenced Marrakech. There were ankle-length coats, knife-pleated skirts, silk jacquards, safari suits with eclectic forest prints, dresses with glass beads. To add a bit of drama, there was even a denim jumpsuit. Floor-grazing pleated skirts with jackets and shirts, ankle-length dresses and fringed jackets with North African mythical prints paid tribute to the region’s colourful arts.

Luxury Diana Ross Maria Grazia Chiuri Dior Cruise 2020 Dior Cruise 2020 Marrakech Marrakech travel Cruise shows
Anupam Dabral
Sr. Associate Editor
It was while studying fashion journalism at London College of Fashion that Anupam developed a keen interest in the anthropological aspect of the discipline; for him, fashion only makes sense when seen in the context of its environment. He is always on the hunt for great stories, and in his spare time binge-watches films/shows starring Whoopi Goldberg, Dawn French and Jennifer Saunders.
Fashion Jewellery Style
Sign up for our newsletters to have the latest stories delivered straight to your inbox every week.