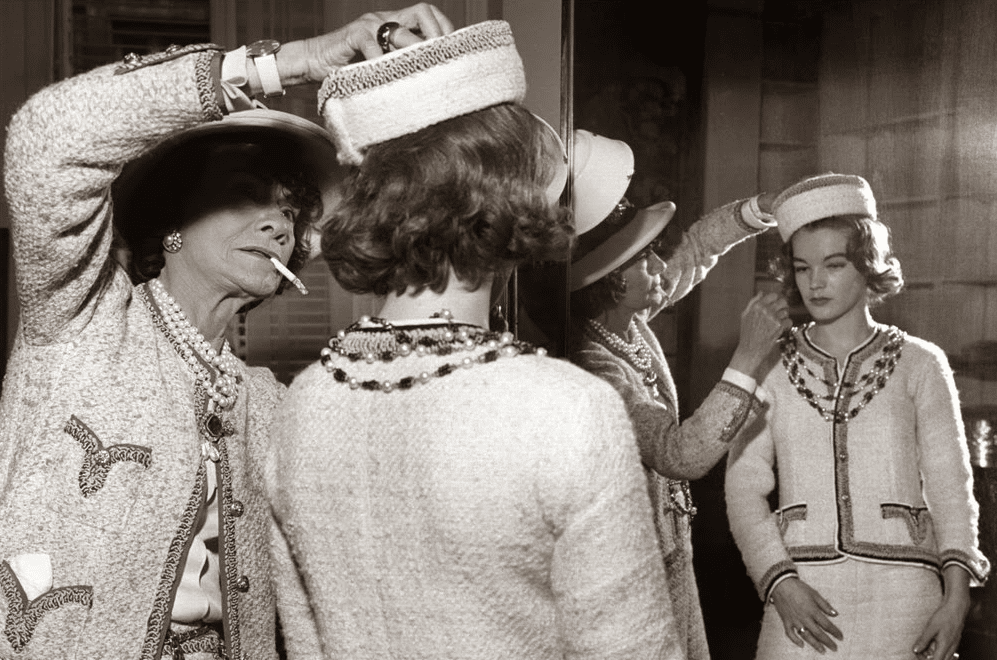 The Chanel jacket is beyond iconic, and how do we categorise that? It’s a distinctive piece of clothing that revolutionised the way women dressed themselves post the 40s code of conduct. The Chanel jacket was first designed in 1954 by Gabrielle ‘Coco’ Chanel to free women from the constraint of the wasp-waisted cinched-in silhouettes. At that time, she was 71.

“It enables women to move with ease, to not feel like they’re in a costume. I’m not changing the attitude of mannerism. This time, it’s very different because human body is always on the move,” described Coco of the idea behind the iconic jacket.

In the 50s and 60s, the Chanel jacket became a status symbol of the British aristocracy as well as for fashion icons like Jacqueline Kennedy. In fact, Jackie O wore her pink Chanel suit during JFK’s presidency and during his assassination. The suit has since become one of the most referenced and revisited pieces in her closet. Back in the 50s, fashion was flamboyant and exuberant with froufrou, bow collars, and bateau necklines. The jacket was mainly influenced by Christian Dior’s 1947 “New Look”.

As for Coco, the fashion world was in dire need for change. She adopted elegance, movements, minimalism, and straight cuts in her new design – introducing a whole new silhouette that would eventually change the way women would dress.

Coco brought a sense of hope along with her utilitarian style during a time when fashion was restricted to conventional looks. This iconic jacket challenged the traditional approach to women’s fashion and gave birth to multiple possibilities. The straight jacket that was inspired by menswear provided absolute freedom of movement — something that was unheard of during that time.

The Chanel jacket takes up to 130 hours of craftsmanship and no fewer than 30 measurements. Adjusted and sculpted – built, dismantled and rebuilt – each jacket is an assembly of 18 separate pieces that are threaded meticulously by hand because only by hand (according to Coco) do you stay true to the spirit of haute couture.

There are four real pockets, braid in matching or contrasting tones depending on the orders of each customer. The trims and buttons are created specifically for each design. Every button is stamped with the symbol of the house, and Coco ordered that each button must come with a buttonhole.

Style
Layering rules for fall 2019: How to wear, what to buy and how to style your winter wear

Coco also brought tweed from Scotland as the base of the jacket. Traditionally used for upper-class country clothing, the fabric became associated with leisurely pursuits of the elite. Coco, who was in a relationship with the Duke of Westminster then, fell in love with the material after borrowing her beau’s sportswear. She was drawn to the sophistication of the fabric and enlisted a Scottish factory to produce her iconic tweed fabrics since the late 1920s.

Similar to the Chanel suit that was designed in 1925, Coco structured her jacket to fit more like a cardigan and less restrictive than any other fashion available to women at the time.

“The Chanel jacket is a man’s jacket, which has become typically feminine. It has definitely come to symbolise a certain nonchalant feminine elegance that is timeless, and for all times,” said Karl Lagerfeld, creative director of Chanel since 1983.

When Lagerfeld took over, the 80s was defined as an era of extremes. Excess was the order of the day. Lagerfeld began playing with the iconic jacket – paired with matching skirts, mismatched with jeans, structured with different fabrics and pastel colours, or in the classic black-and-white palette.

“There are things in fashion that never go out of style – jeans, white shirt and a Chanel jacket,” stated Lagerfeld. The versatile structure lends itself to all metamorphosis and adapts to all daring creations. Lagerfeld is also known for his extravagant point of view. But 60 years after its creation, the Chanel jacket remains the cornerstone of contemporary fashion and has been endlessly reinvented by Lagerfeld in each of his collections.