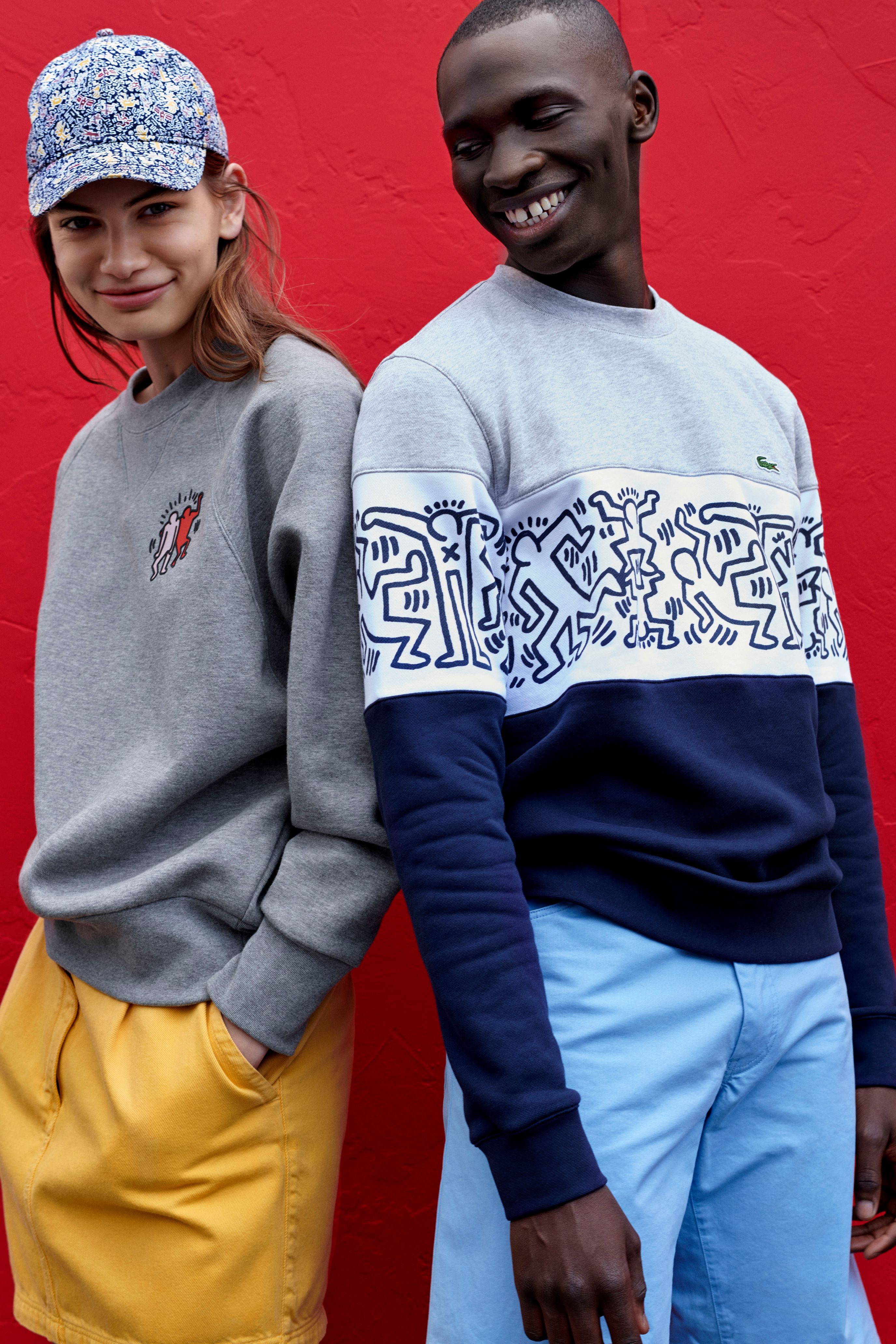 It was the 1980’s when New York’s East Village being the cultural melting pot became a canvas for a number of artists. But the one artist who singularly has left his impressions is Keith Haring. Celebrated for his distinct pop-graffiti aesthetic featuring a variety of imagery centered within a bold outline, Haring’s art became a medium of social reflection. On sifting through his work one realises his bravado that embraces themes such as drug abuse, nuclear holocaust and exploitation,  that were often treated as taboo.

Enamoured by the works of Pierre Alechinsky his interest in art piqued To pursue his passion Haring moved to New York in the 1970s and embraced the growing graffiti culture.

French, luxury sportswear company, Lacoste is paying tribute to the late artist in it’s the latest collection. What made Haring standout among his contemporaries such as Andy Warhol, Kenny Scharf, and Jean-Michel Basquiat was his simplicity of work; eccentric caricatures of babies, barking dogs, flying saucers, hearts done in bright colours and outlined in black depicted his energy, zest for life and spontaneity.

And it this vibe that Lacoste has tried to capture through it’s latest one of offerings. The collection comprises of polo shirts, T-shirts, shirts, sweatshirts, dresses and swimsuits featuring the iconic Haris pictograms. There are pieces for transitional weather as well like edgy bomber jackets with linings featuring Haris’ artwork.

A reversible tote and pair of sneakers complete the collection. The equally legendary “Barking Dog” and “Heart” drawings are displayed on a T-shirt or discretely applied on the collar of a polo shirt or the back of a tennis shoe.

The colourful collection is available at www.lacoste.com and in a selection of Lacoste stores.

Lacoste Luxury Fashion Fashion Collaboration KEITH HARING X LACOSTE
Anupam Dabral
Sr. Associate Editor
It was while studying fashion journalism at London College of Fashion that Anupam developed a keen interest in the anthropological aspect of the discipline; for him, fashion only makes sense when seen in the context of its environment. He is always on the hunt for great stories, and in his spare time binge-watches films/shows starring Whoopi Goldberg, Dawn French and Jennifer Saunders.
Fashion Jewellery Style

Beauty & Grooming
Salons have opened up. Here’s what you should know about their safety measures
Gear
Quick-and-easy hidden WhatsApp features you’re missing out on
Weddings
Bridal maang tikka designs that you need to pin on your mood board
Gear
After the big Chinese ban, India launches its own social app, Elyments
Culture
After a two-year wait ‘Breathe’ Season 2 releases this week. Here’s what to expect
Food & Drink
Superfoods 101: Best foods for glowing skin you need to stock right now
Beauty & Grooming
Makeup for Indian men: What’s the deal and products to buy
Your Money
Contrary to popular belief, investments aren’t better off in the hands of men
Gear
Digital edge: 7 best lifestyle apps for the busy woman
Sign up for our newsletters to have the latest stories delivered straight to your inbox every week.

Attend your first-ever Haute Couture Week this year in pyjamas

A phone is an essential investment we all make and