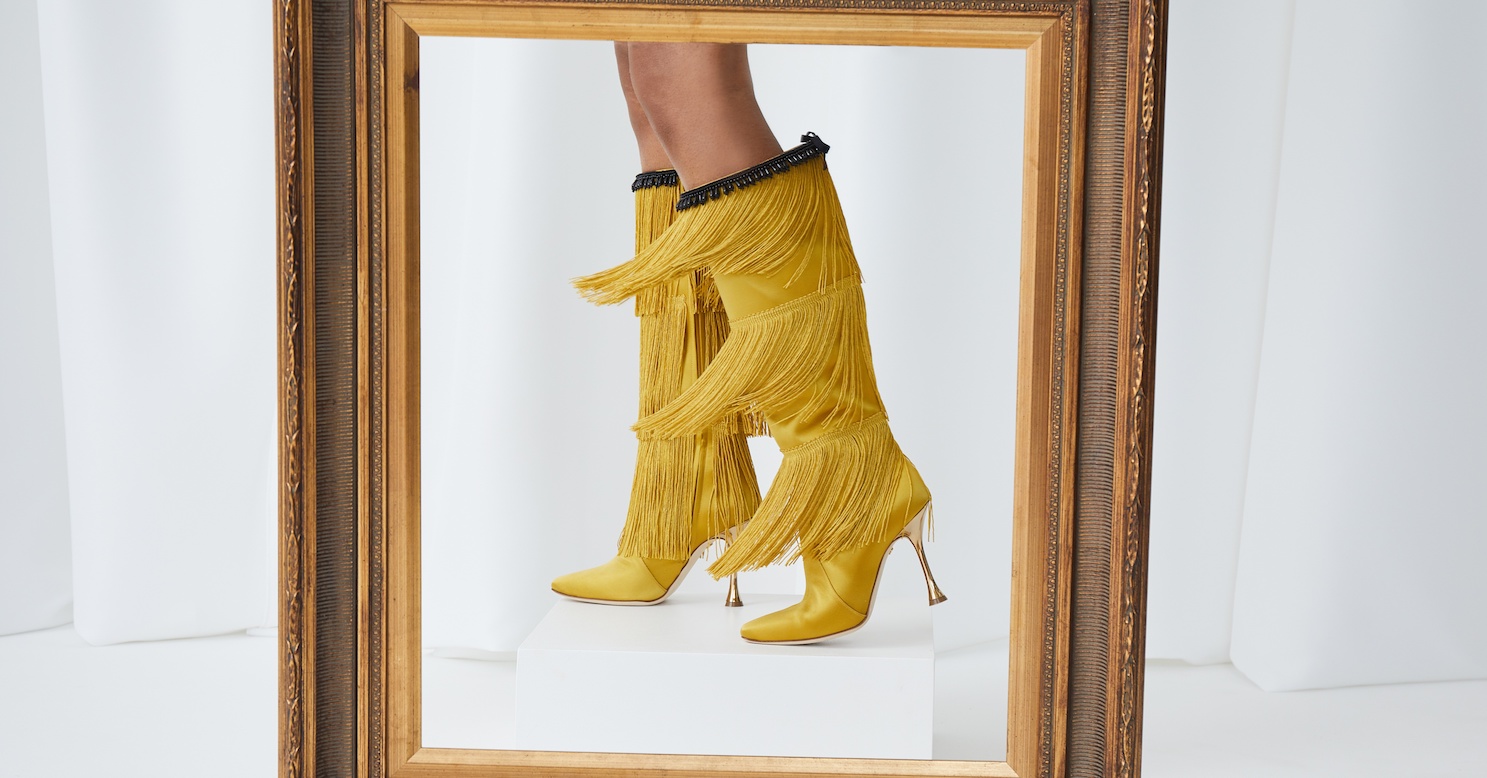 Since starting his namesake brand in 1971 (at the behest of the legendary fashion editor Diana Vreeland, no less), the Spanish-born designer has enchanted the world with shoes: shoes whose craftsmanship paralleled their comfort, shoes with charm and character, shoes that lived in women’s fantasies.

From the beginning, Manolo Blahnik has worked his magic from his Old Church Street boutique in London, which, despite its humble size, lured stars that were larger than life (think David Bowie, Princess Diana, Bianca Jagger, Paloma Picasso, and more.) He continues to be based there, even though he just opened a sprawling store in New York’s Upper East Side that elevates his shoes to sculptural works of art.

After 50 years in the business, Blahnik’s hard-earned reputation as a master of his craft endures. In 2019, his company acquired the renowned Italian shoe factory, Calzaturificio Re Marcello, which has been producing shoes for luxury brands for decades. Now, the atelier’s highly-skilled craftsmen create exclusively for Blahnik. The designer himself regularly oversees the work in the factory, ensuring that every pair is made to the best quality and stays true to his vision.

Blahnik is also famous for shunning trends, saying, “I design all the shoes myself, and I wouldn’t have it otherwise. I don’t want to be influenced. Sometimes I’m successful, sometimes I’m not, but it’s my product, my idea, and I follow it to the end.”

Mostly, he has been successful. Just last month, his heels were spotted on Rihanna, with whom he collaborated in 2016. That same year, Manolo Blahnik x Vetements conquered Paris Fashion Week; a pair of hot-pink thigh-high boots from that collection was recently worn by Kim Kardashian for her SNL appearance.

Her sister Kourtney, also a longtime fan of the brand, has kept its shoes a part of her wardrobe even as her style started leaning towards gothic glamour. She wore Manolos with a leather dress at the MTV VMAs, shedding the shoes’ more formal connotations. Younger style stars like Caro Daur, Aimee Song and Jamie Xie have also demonstrated the versatility of the shoes, incorporating them into laid-back, everyday looks and trendy outfits.

On top of finding fans in fashion’s biggest tastemakers, Blahnik’s company is still an independent, family-run enterprise — a true accomplishment in a time when fashion brands are being gobbled up by billion-dollar conglomerates left and right.

In other words, Manolo Blahnik has a lot to celebrate. And he has done so with all the pomp and grandeur you would expect through his new Gold capsule collection. It features 19 designs, ranging from signature shoes like the Hangisi and the BBLA to brand-new silhouettes, that dazzle in their divine hue.

“It’s been 50 years of learning the craft to make the most beautiful things I can and five decades of work into one extraordinary collection,” said the designer. (Those five decades have also been elegantly captured in Manolo Blahnik’s new virtual museum, which you can visit here.)

Be it for their magnificence, or their significance to Blahnik’s career, the shoes in the Gold collection are must-haves for any serious Manolo Blahnik collector. You can now find them at the Manolo Blahnik Marina Bay Sands boutique, along with the brand’s Autumn 2021 offerings. Below, we spotlight some of our favourite shoes from the collection. The precisely curved toe, the sparkling crystal buckle, the stiletto heel — these are the features that define Manolo Blahnik’s most iconic shoe. The Hangisi was introduced as part of his Spring/Summer 2008 collection, and later cemented into fashion history when Sex and the City‘s Carrie Bradshaw was proposed to with a blue pair. The shoes remain a bridal favourite; it was even spotted on Lady Gaga in a wedding scene from her upcoming film, House of Gucci. Who wouldn’t want to make memories with this new version, glowing with golden leather and mesh, as well as Swarovski citrine crystals? 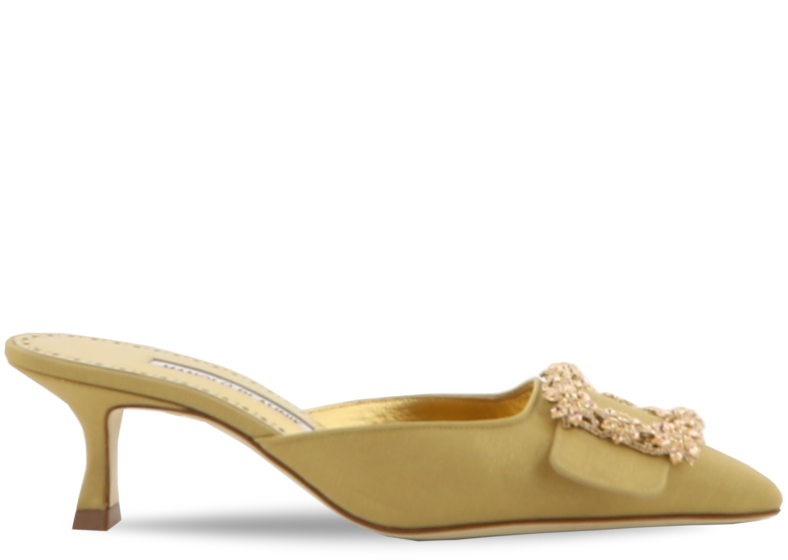 The Maysale is another beloved buckled shoe by Blahnik. The style was first created for Isaac Mizrahi’s 1991 fashion show. The shoe designer even made a pair for Marge Simpson, three decades before Balenciaga’s buzzy collaboration with The Simpsons. Now, the famous mules boast a flaxen flourish thanks to its yellow grosgain upper and the Swarovski citrine crystals on its pilgrim buckle. 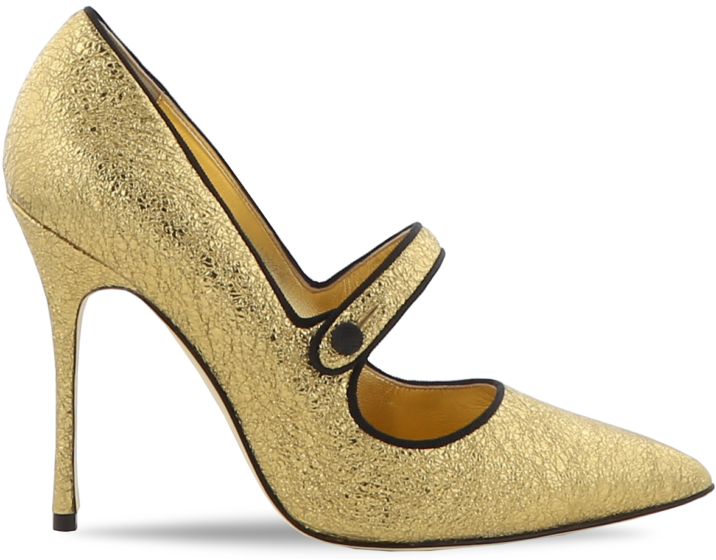 Leave it to Manolo Blahnik to make Mary Janes look sexy. Described as “an urban shoe myth” by Carrie Bradshaw, the Campari heels were first introduced in 1994. “I had gone through a bit of a baroque period in the early Nineties and wanted something to counter that, so I went minimalist,” explained the designer. Indeed, the allure of the Campari, and its successor Camparinew, lies in its gorgeous silhouette, glossy polish and grosgrain trim. The 50th anniversary edition of the shoes are even more special, coming in a cracked gold foil finish much like that of a fancy sweet wrapper. 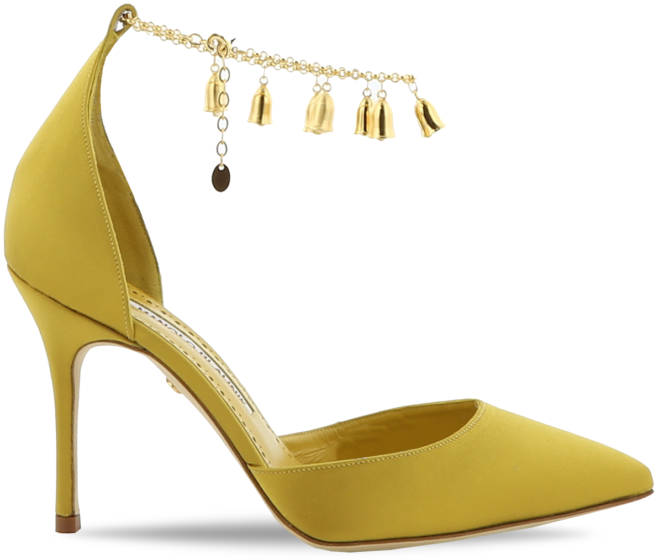 “Campanilla” is Spanish for “bell”, a symbol that holds a special significance to Manolo Blahnik. It was part of a charm bracelet worn by his mother during his childhood. For his golden jubilee collection, the designer has recreated the nostalgic sensation of hearing its tinkle by embellishing the anklet chains of the satin Campanilla sandals with tiny bells. 50 years after sketching the shoe with its ankle entwined by ivy and cherries that so enchanted Diana Vreeland, fashion’s favourite shoemaker has clearly lost none of his whimsy. 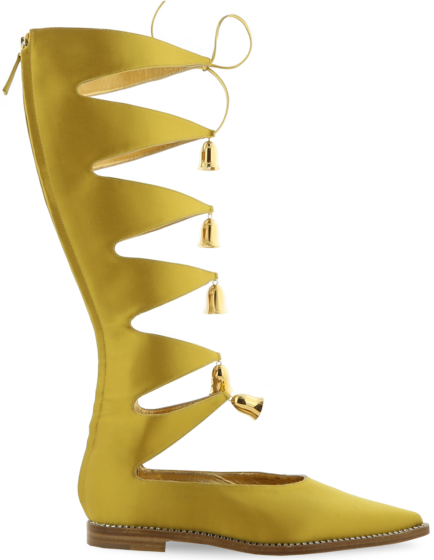 The bells motif can also be found on Blahnik’s favourite style of the collection: the Rayuela boots. The shoes are marked by their cut-out detailing, the crystal trim around the soles, and of course the bells that dangle down the front. Toeing the line between playfulness with elegance, these are shoes that only the Spanish designer could dream up.