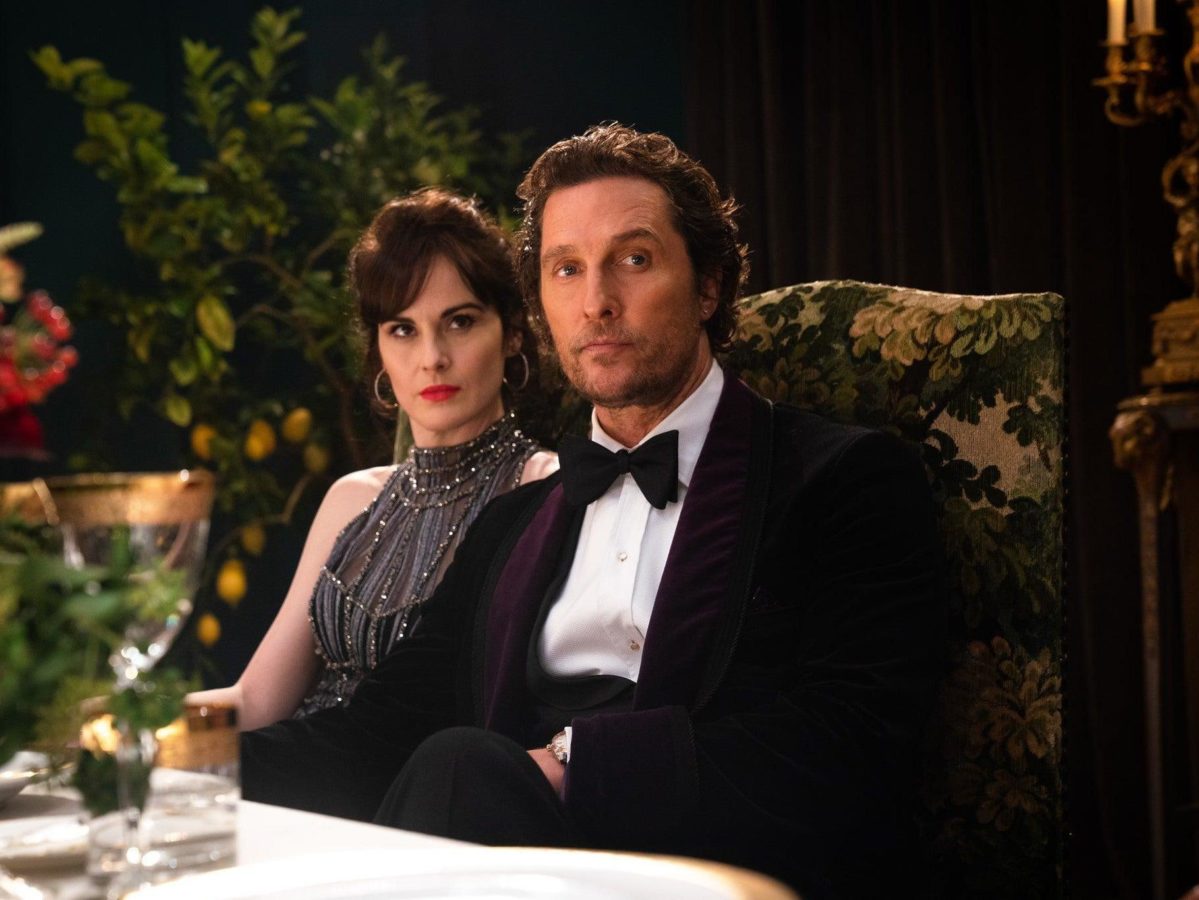 In the very first sequence of The Gentlemen, Guy Ritchie sets a tone of unpredictability and suave for the entire movie. Fading into the nervous growl of Mickey Pearson’s (Matthew McConaughey) Mercedes GLC as he takes a seat in a posh brewery, only for someone to take a take a bullet to the head 25 seconds later, ruining his perfect glass of beer with a splash of gangster blood.

I’ve highlighted scene not for a visual directory but simply for Mickey Pearson’s appearance instead. The moment he walked through the door wearing his signature burgundy suit and buttoned-up polo tee, I knew that fashion was being taken as seriously as the script. Painting today’s signature silhouettes, this one scene shows us how stylish a gangster encounter can get, unfolding sartorial sophistication and a discerning taste in menswear.

Gangster movies like The Godfather, Scarface or The Irishman interpreted gangster style as old-school retro with a pinch of classic silhouettes. Talk about big lapels, off-beat suit colours, a host of pinstripes, and punctuated gold accessories. But Guy Ritchie takes all of that and gives it a twist like no other. Each character creates a new blueprint for the specific style he imbibes – there’s the suave gangster, the Chinatown cliche, the athleisure lover, and that leather-clad polo-neck fan – all of them coexist beautifully in one frame without outdoing one another. Apart from Mickey Pearson being a cannabis kingpin in England, it’s fair to say that he’s quite a discerning dresser. He truly embraces the classics of menswear and all its elements. However, the spectrum of menswear here has been pinned and mapped, with each character having an exclusive signature style and we decoded all of them. The protagonist Pearson has evolved from a university bag-man to a kingpin. His signature combo is tartan woolen suits over monotone polos. He did this in burgundy, navy, and a mix-match of pastel pink too. When it comes to accessorising, he’s gone minimal with just a bold watch. Surprisingly, we never really got a good look at what kind of footwear Mickey was into but we’d expect him to boast a pair of oxford brogues or suede leathers. In gangster flicks, there’s only one way the protagonist would be eligible to contest the antagonist. He has to match his calibre in all fields – street clout, money, ammunition, and style. While Mickey is knee deep in formalwear, the Chinatown gangster struts in fields of European styled winter layering and more flamboyant jackets.

Take a look at this picture here, a brown leather jacket with a fur collar worn over a black turtleneck. It’s almost effortless and a great example of investing in classics. To accessorise, he wears gold watches to match the metals on his neck and fingers. He might be a drug lord but this outfit works on a fashion show’s front row seat as well as a great travel look. It’s safe to say that Fletcher is a true mastermind but his overspill is simply comedic gold. When it comes to style, he does go lot younger than his age. While so, it’s usually leather jackets and turtlenecks. But it’s actually his eye-wear that’s a signature statement. The see-through lens was popularised by Robert Downey Jr., which is also a great trend for older gentlemen. Ray is the coolest business casual figure we’ve seen in a while. His use of cardigans, tie-bar, tall collars, and more suited his Oxford-yet-gangster silhouette perfectly. Be it a houndstooth jacket with stripes or a play between tartan and tattersal, Ray is all the inspiration you need when it comes to pattern mixing, which is the blueprint of business casual silhouettes. While experimenting, just know that it can be a real minefield, but the sartorial pay off is worth it. Embracing the art of street style and athleisure showed us a very fun side of gangsters, thanks to Colin Farrell. He plays the supporting role of Coach, who as the name suggests coaches a youth of thugs. This is the flamboyant end of the style spectrum. While they all keep up with English athelisure codes of bomber jackets, joggers, and classic adidas sneakers, they have retro accent in their dressing. It isn’t modern athleisure at all, it’s retro sportwear that doubles up as high fashion statements.

In terms of story, The Gentleman may not score an Oscar for suspense but it is a true museum of menswear. And while Matthew McConaughey might be at the forefront of the film, his gang and partners in this narcotic fun are equally responsible for making this film a sleeper mastercraft in style. It’s a comedy action entertainer that revolves around Mickey Pearson and his monopoly on the cannabis market in the U.K.

Somehow, this movie has no wrong answers in terms of style. While business casual is a major theme, Charlie Hunnam has been the man acing that silhouette. Whereas on the other end of the spectrum, Colin Farrell is making gangsters cool with loud notes of athleisure and sporting a pair Stan Smiths.

The Gentlemen released on 24th January and is currently in select cinemas.