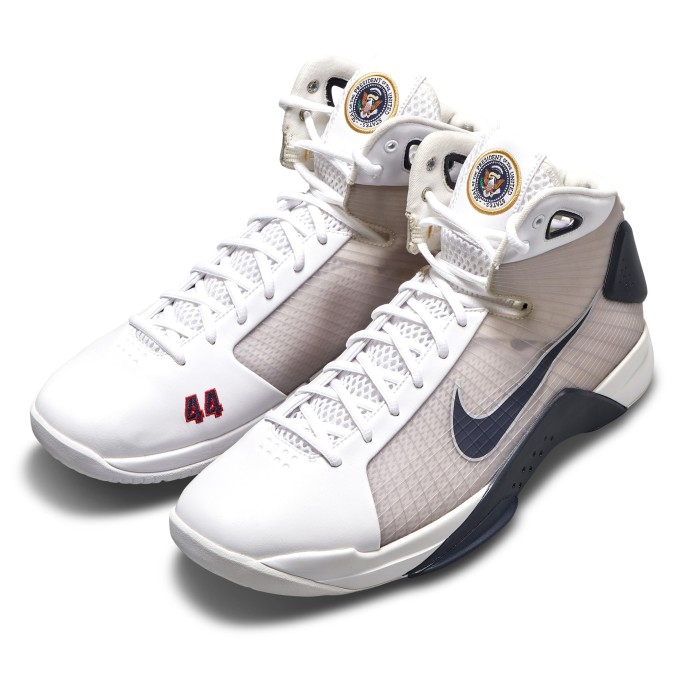 Barack Obama’s Nike Hyperdunks are up for auction

Are you will to pay US$25,000 for a pair of Nike Hyperdunks sneakers? You might when you find out they were specially designed for Barack Obama. This month, auction house Sotheby’s will sell a pair of sneakers designed exclusively for the 44th President of the United States, a particularly rare pair that could attract much attention from collectors.

This pair of Nike Hyperdunk sneakers, in US size 12.5, is inspired by the pair worn by Team USA basketball players at the 2008 Beijing Summer Olympic Games. They are printed with various patriotic symbols, including the Presidential Seal and bald eagles with the date 1776, referencing the year of the United States Declaration of Independence. The inner side of the sneakers also features the number 44, nodding to Barack Obama’s place in history as the 44th US President.

Sotheby’s takes the homage even further by auctioning this very special pair of Nike Hyperdunks Friday, February 12 at 16:44 (EST). The date is highly symbolic, since it happens to be President’s Day, a public holiday commemorating former US Presidents.

The sneakers are estimated at US$ 25,000, although bids could take the price even higher. According to Sotheby’s, these Nike Hyperdunks are considered one of only two pairs in existence, with this pair serving as Nike’s confirmation sample to check the quality of the shoe before producing the pair given to Barack Obama. Still, it’s difficult to imagine them reaching the record sum of $615,000 fetched in a Christie’s auction in August by a pair of Air Jordan 1 Chicago sneakers worn by Michael Jordan early in his career.

The market for collectors’ sneakers has been all the rage in recent months, so much so that auction houses don’t think twice about proposing exceptional pairs to draw new collectors into their ecosystems. Sotheby’s caused a sensation in December by announcing the sale of a pair of unique sneakers designed by the sportswear brand Adidas and the German porcelain maker Meissen. Although not designed to be worn, these sneakers were estimated at “US$1 to $1,000,000” —  a bold move which maybe didn’t quite pay off, since the sneakers finally sold for US$126,000.