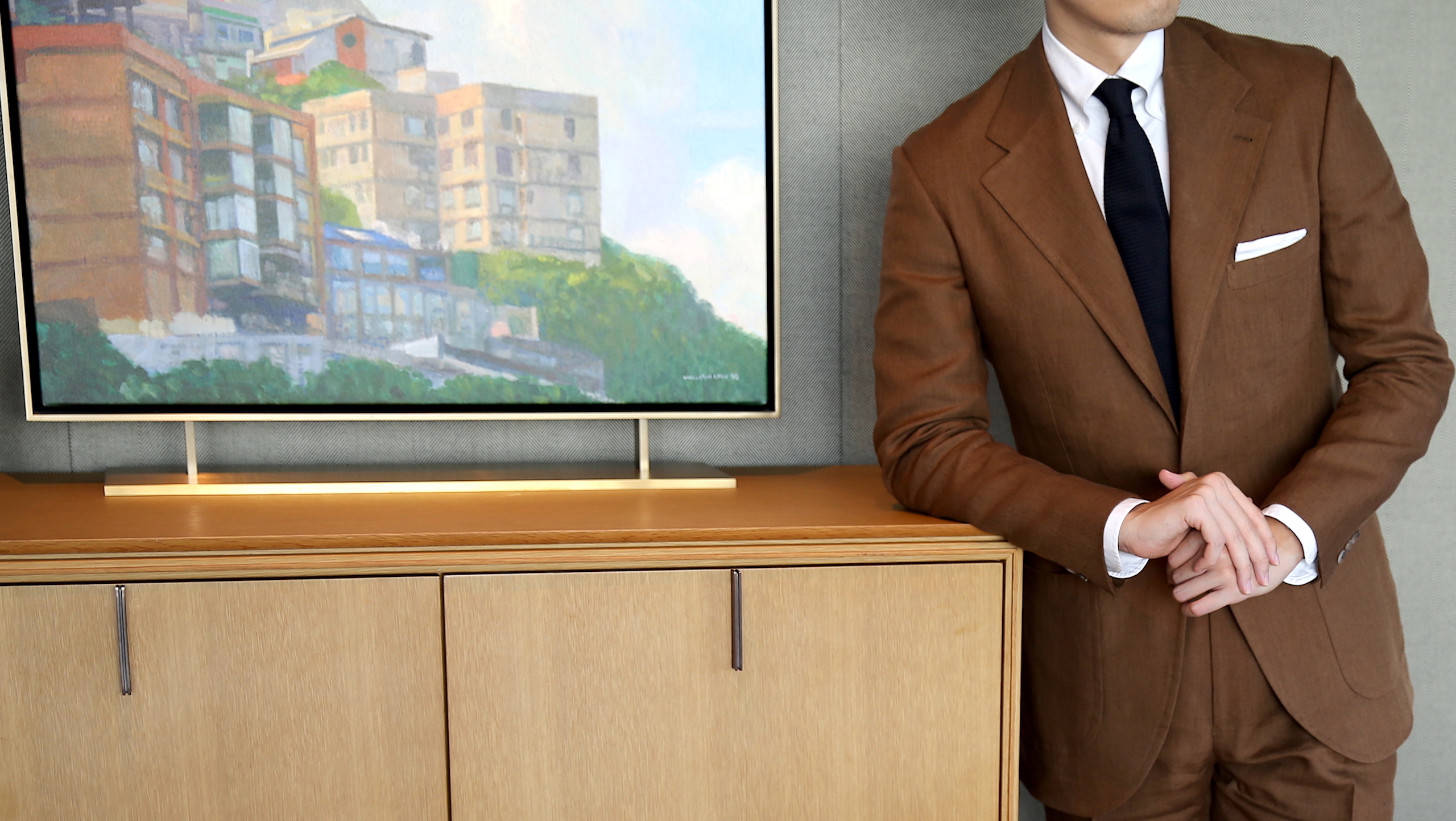 Regular readers will recall last August when we spoke to Buzz Tang about then-nascent tailoring brand The Anthology. From the outset, we were intrigued by the handsome, finely-made garments emanating from his workshop; but for those who are just joining us, the whole enterprise pretty much breaks down as follows. Established in 2018, The Anthology is the brainchild of two Hongkongers: Buzz Tang, the aforementioned London-based designer; and local financier-turned-tailor Andy Chong.
Like many of the Hong Kong tailoring brands which have sprung up over the past few years, The Anthology conducts multiple fittings for clients from a conveniently located showroom in Central (it doesn’t hurt that theirs is next door to Rōnin). Most of the actual work — the cutting, sewing, and finishing — takes place off-site, at a workshop in Mainland China, under Andy and Buzz’s supervision. Tailoring geeks know nowadays this sort of arrangement is the norm, though I’m happy to confirm that The Anthology is among the few local tailors who are really nailing this set-up — evident in the two-piece suit they delivered to me late this summer.

As with our previous reviews, I asked Buzz and Andy to make something which would be ‘characteristic’ of their brand. The result is a well-made suit that (mostly) flatters me, and that handily illustrates the importance of having a coherent, fleshed-out house style. Considering the average pricepoint (suits start at HK$11,000) I’d heartily recommend The Anthology to anyone interested in the kind of custom clothing that offers value, and more importantly, possesses a strong sense of identity. The making process at The Anthology is generally consistent with what you’d expect from one of Hong Kong’s better tailors. Notwithstanding exceptional circumstances, Buzz and Andy aim to turn around a client’s first suit over three fittings — with the middle stage being the most crucial. That’s also where the biggest deviation from Western bespoke occurs: as the second fitting is conducted using a mockup made from ‘trial’ cloth, rather than the ‘baste’ that’s so common in British bespoke.

Naturally, your level of concern around this detail boils down to how actively you participate in the bespoke process. I personally didn’t find the use of a ‘trial’ (i.e. a full suit, made to my pattern, in disposable 200g cloth) off-putting, but for men who have trouble visualising what the final product will look like, there may be some cause for concern. Andy explained they ultimately do this for the convenience of their tailors, since the highly malleable nature of trial cloth means it’s better suited to addressing significant issues of fit. (Similarly, if individual panels of a basted garment are already made using the finished fabric, this puts restraints on the kinds of changes tailors can make.) The Anthology house style is an amalgam of Florentine and British influences, cut with extended shoulders, a low gorge and a good amount of drape. For a client's first pair of trousers, Buzz and Andy recommend a full pleat, higher rise and (as you can see) a generous, classically proportioned leg opening.
I began to understand the wisdom of Andy’s approach during our second fitting. Even then, the results were pretty good but the use of a trial cloth enabled us to decisively address certain underlying issues that went undetected initially: A 2mm pad was inserted into one shoulder in order to account for my dropped left arm; the rear of the trousers raised to balance out my forward-pitched posture; and the jacket’s backpiece elongated in response to misaligned shoulder blades. (Andy didn’t catch the latter issue when I was first measured up due to my irregularly straight posture. Pro tip: when fitting for bespoke, always assume your normal posture.)

As previously mentioned, Buzz and Andy have spent a good deal of energy fine-tuning their ‘look’; and the resulting suits occupy a niche somewhere between office attire and casual tailored clothing. In the image below you can clearly see their default jacketing style mixes a soft silhouette with certain dramatic qualities. Both the shoulder and lapel are on the wider side (by modern standards) with the latter slung low and square upon the chest. The collar too is quite large — simultaneously drawing the eye down the lapel and across the length of the shoulder. Foreparts meanwhile (i.e the two forward-facing parts of the jacket, below where it buttons) are rounded and open. It’s important to stress that the results of my fittings were, almost inevitably, improved by the aforementioned ‘house style’. As somebody with wide yet decidedly uneven shoulders (15cm from point to point), the jacket worked to smooth out my posture, creating the illusion of a clean undulating line. This in turn — with the aid of some very subtle draping — conveyed the impression of a narrower, more athletic torso without sacrificing anything in the way of comfort. (The waist of the jacket is still full enough to accommodate knitwear underneath.)

You get a visceral sense of how skilled The Anthology’s cutters are by looking at the shoulder and lapel, but this expertise is often expressed in other subtler, no less beautiful ways. Previously I mentioned how rounded the foreparts were, and this is another aspect I think The Anthology need to be commended for: the brand’s jackets certainly don’t have the exaggerated ‘flair’ of the more costume-y Neapolitan makers, but there’s just enough shape and movement in the skirt that you wind up with something (particularly in linen) that’s just casual enough to wear as a sportcoat. Never a bad thing.

To wit, I haven’t really broached the subject of the trousers and that’s because, speaking frankly, these don’t require too much of an explanation. They’re an impressive piece of sartorial architecture — and are most certainly not for everybody. What I mean by this is that, per Buzz and Andy’s specifications, they’re on the high-waisted side — sitting almost flush with the navel. It’s a style which has seen something of a revival in fashion circles lately, but (amongst sartorial cognoscenti) has always been regarded as being comfortable and conducive to a fuller cutting style. Given that I have a bit of a paunchy midriff, trousers with a higher rise are something I’ve gravitated towards for many years now. Still, men who spend a lot of time on the AbDominator can request a medium rise, though it’s worth committing (at least for your first suit) to the aesthetic propounded by Buzz and Andy. A genuine sense of style is, after all, the element they’ve worked hardest to infuse into their product. Can we say the same about the competition?

2-piece suit commissioned in W Bill ‘tobacco’ linen (HK$11,780). For similar pieces, contact or make an appointment with The Anthology via Instagram.