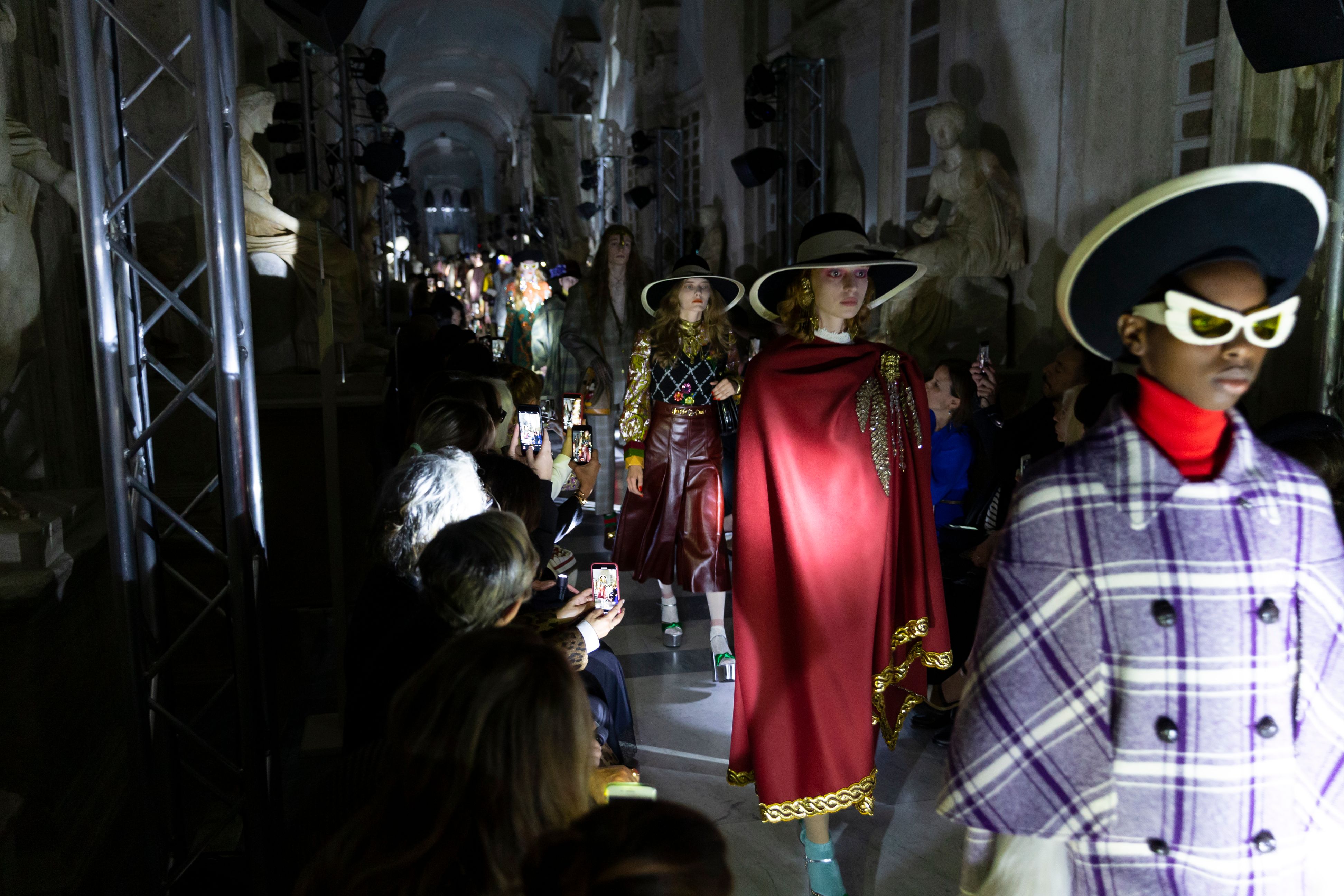 Stunning headgear & stacked cuffs: All the accessories from the Gucci Cruise 2020 show

Style
Stunning headgear & stacked cuffs: All the accessories from the Gucci Cruise 2020 show
Share this article
Next article
Alessandro Michele’s ability to initiate a dialogue with his creations makes him one of the most thoughtful designers from our times. With the underlying themes of self expression, inclusivity and individuality, Michele once again showcased a power-packed collection, this time in the historic Capitoline Museums, Rome. Culling out historical references and melding them with this vibrant sensibilties has remained his signature since he took over the creative realms of Gucci in 2015. His latest show, well-crafted to exude Gucci’s eclectic Italian essence reflected on the political climate of the 70’s and today. Freedom of choice being the focal theme, Michele rolled out a medley of tailored pantsuits, knitwear, crinkled maxi dresses and T-shirts.
What stood out was the use of slogans such as “My body, my choice” on blazers and the date “May 22, 1978” signifying the date when abortion was legalised in Italy. To further enunciate the point there were pieces embroidered with the image of female reproductive organs, signalling at the freedom women should have when it comes to their bodies, focussing on the current political scenario. The collection represents everything he stands for – freedom of expression alongside equality and individual choice.
However among a magpie of cultural references what stood out were his accessories. Needless to say, Michele’s past collections have been replete with accesories paying tribute to various subcultures and periods of history. From spiked necklaces and masks reimageing the idea of BDSM, to exaggerated bows lined with beads, knee pads with brocade stockings, crystal covered rib cages, hats resembling Tibetian monastries, Russian headscarves and more.
However one of the most potent manifestations of Michele’s belief in self expression was seen at his Autumn/Winter 2018 show, where models ditched handbags for replicas of severed heads and dragons. Jewellery has always been an inseperable part of Michele’s creative canvas; imagine models in tiaras, multiple rings and pieces of body jewellery.
In 2006 when he was named as the Leather Goods Design Director under the creative direction of Frida Giannini, it was the love and understanding of handbags that manifested in his confident experiments with different shapes and textures. To be honest, his latest accessory showcase wasn’t any different but was filled with the same passion – there were varied versions of the classic Bamboo bag, body jewellery for men and uniquely-shaped geometric shades. However, the opening look of the show once again pinned Michele’s status as a showman; it was a tribal-inspired head gear, followed by sequinned hats and beanies, stacked cuffs, velvet loafers in striking hues and much more. What stood out for us were the boxy handbags, neckpieces for men worn over tees and colour-blocked sneakers.
All Images: Courtesy Gucci
Gucci alessandro michele Gucci Cruise 2020 Alessandro Michele handbags Gucci show
Anupam Dabral
Sr. Associate Editor
It was while studying fashion journalism at London College of Fashion that Anupam developed a keen interest in the anthropological aspect of the discipline; for him, fashion only makes sense when seen in the context of its environment. He is always on the hunt for great stories, and in his spare time binge-watches films/shows starring Whoopi Goldberg, Dawn French and Jennifer Saunders.
Fashion Jewellery Style
Sign up for our newsletters to have the latest stories delivered straight to your inbox every week.