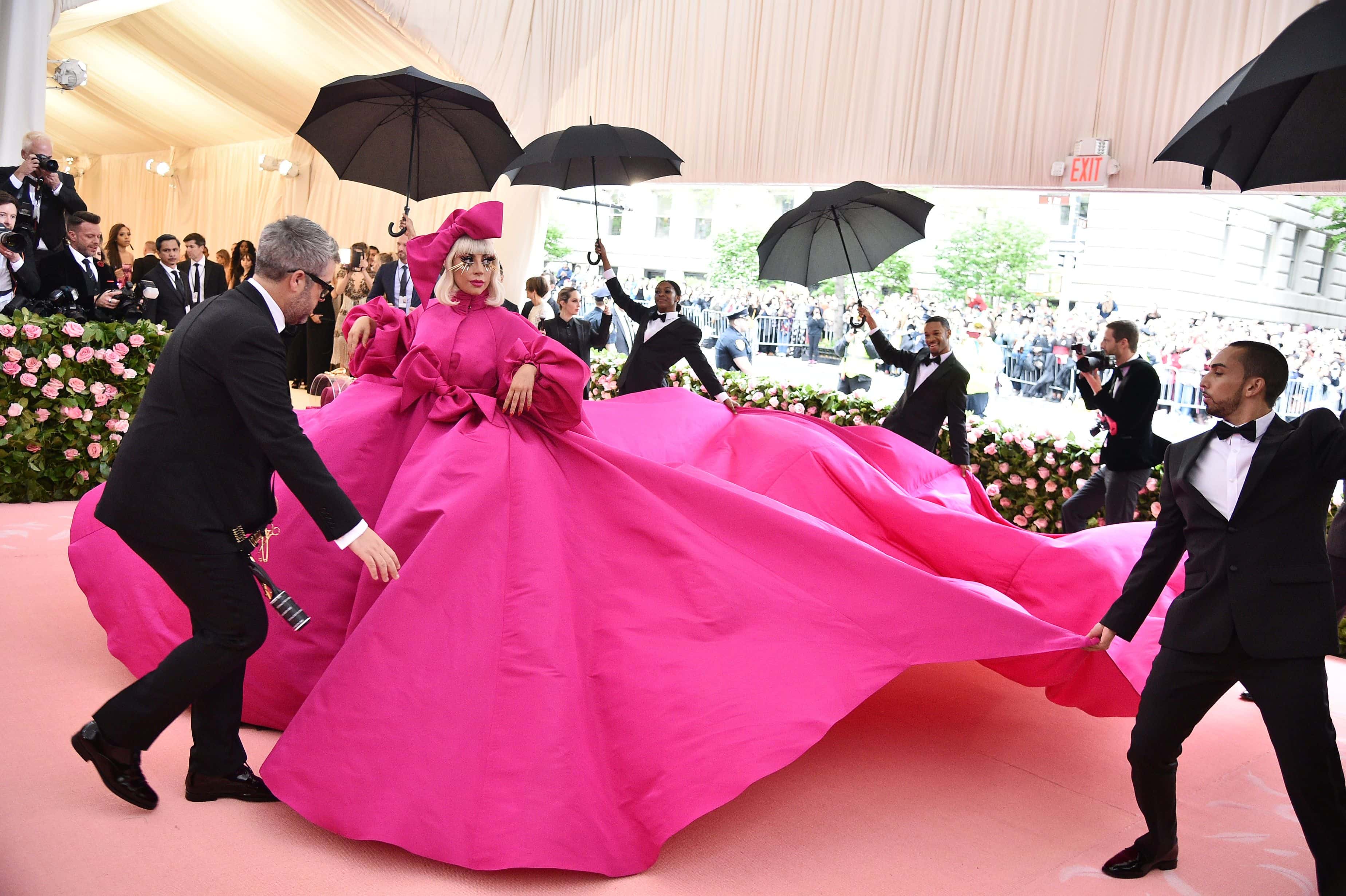 Following the announcement of the year’s theme for the Met Gala ‘Camp: Notes on Fashion’, we were genuinely on the edge to see how designers reinterpreted the same. And a few hours ago we got to witness some of the biggest celebrities adorning the most dramatic creations by the likes of Versace, Prada, Moschino and more. From show-stopping entrances and floor-grazing gowns to multiple costume changes, this year’s Met Gala 2019 saw fashion truly meld with theatrics. Co-chaired by Lady Gaga, Alessandro Michele, Harry Styles, and Serena Williams, fashion’s most important red carpet was packed with sartorial finesse.

Here is a lowdown on looks that stood out for us from the Met Gala 2019.

Drama is second nature to Gaga and when it’s the Met, why compromise on it? She chose her preferred New York-based designer Brandon Maxwell, and led the way with not just one look but four (a pink gown with a bow, a black strapless gown, a pink slip dress and lingerie with bling-y tights) Maxwell looks.

Billy Porter in The Blonds

After the Oscars and Golden Globes, Billy Porter has registered as a contender for being a red carpet favourite – he slipped into a Christian Siriano two-piece (a ball gown and a blazer) for the Academy Awards. At the Met Gala 2019, he adorned the look of the Egyptian Sun God. The look, created by The Blonds, was essentially a body suit, headgear, and golden wings dripping with drama.

Calling them the first family of fashion won’t be an exaggeration. Kim Kardashian-West stuck to her usual bracket of hues and chose a nude Mugler’s creation. Kylie, on the other hand, went all out in a lavender feathered Versace, and her supermodel Kendall followed in an orange version.

Music royalty Celine Dion, who has taken to slipping into some of the best couture pieces lately, took to the red carpet in a 22-pound, hand-stitched fringe bodysuit, T-bar heels, and a feathered headpiece. No, she is not gearing up for a stage performance – this was her version of the camp for the Met Gala 2019.

Last year at the Met, Gigi Hadid opted for a Versace gown inspired by the sliced glass panels of a church window. This year, her look was a Michael Kors white + metal bodysuit, paired with a cape, platform boots, and of course, a headdress.

Priyanka Chopra and Nick Jonas know how to pull their act together, not just in a music album but on the red carpet as well. It is rumoured that it was the Met Gala where both of them were introduced to each other, and here they are again, clad in custom Dior posing for shutterbugs. While Priyanka opted for an ombre, feathered Dior gown, Nick went for an embellished white suit for the same label.

Severed heads as accessories? Leave it to Gucci’s creative director and co-chair for the Met, Alessandro Michele to loop them in. Over the years, Jared has slipped into Michele’s creations, being his eternal muse. Recently, he was even seen in a lipstick campaign for Gucci. For the Met Gala 2019, Leto opted for a red satin dress, with body jewellery holding a replica of his own head.

Katy Perry was seen shining some light in not a chandelier inspired but an actual chandelier, courtesy Moschino. She changed into an appetising cheeseburger dress later.

Cardi B in Thom Browne

Rapper Cardi B brought the pink carpet to a halt in a custom red feathered gown with an extra large train, all courtesy visionary designer Thom Browne. From the head-dress to the quilting, everything spoke of attention to details.

For her third Met Gala, Deepika Padukone went all Disney on the pink carpet. Opting for a multi-layered Zac Posen gown, the piece was a work of art and technology. The New York-based designer put together 400, 3D printed embroidery pieces to create Padukone’s look.

Red Carpet Fashion Met Ball Deepika Padukone at the Met Priyanka Chopra the the met Kim Kardashian West at the Met
Anupam Dabral
Sr. Associate Editor
It was while studying fashion journalism at London College of Fashion that Anupam developed a keen interest in the anthropological aspect of the discipline; for him, fashion only makes sense when seen in the context of its environment. He is always on the hunt for great stories, and in his spare time binge-watches films/shows starring Whoopi Goldberg, Dawn French and Jennifer Saunders.
Fashion Jewellery Style
Sign up for our newsletters to have the latest stories delivered straight to your inbox every week.