Kanika Ranka Adani of The Studio Project on her serendipitous foray into the world of sneaker and handbag customization and personalizing for Bollywood celebrities.

Kanika Ranka Adani’s foray into the world of sneaker and handbag customization was a matter of chance. An unplanned, unimaginable move that happened that started as a passion project and snowballed into a business. “I was painting a pair of shoes for a friend’s birthday as a present and I did a really cool piece with graffiti and famous characters and made this really funky pair of shoes which she absolutely loved. She posted the picture of the shoes on her Snapchat and Instagram, I reposted it and I think it really kind of took off from there,” recalls Kanika Ranka Adani. With a natural gift in the arts, Kanika soon became a much-sought-after solution for those looking to cover up the botch-ups in their priced possessions or wanting one-of-a-kind creations.

While it might seem like a daunting task, hand-painted sneakers and handbags aren’t a rarity internationally. Stars like Kim Kardashian have flaunted their personalized creation with elan. “This concept existed internationally in a small niche way, but never really in India and after people saw it, I think everyone was really craving something that made them stand out and made them unique. Having that luxury bag no longer made you really stand out in the crowd or made you feel you have something one of a kind as it is very easily accessible now with travel,” points out Kanika. The success of The Studio Project has been primarily because of word-of-mouth recommendations and that organic growth has led to her personalizing accessories for some of the biggest names in Bollywood.

Taking the sneaker and handbag customization service a notch higher, Kanika has also collaborated with brands like Ferragamo, Charles & Keith, etc to set up personalization booths at events. “Post the pandemic, brands are really looking for ways to re-bring the interaction, to bring touch and feel to products, new launches, and no better way than having a live in-store activation. While it was daunting at first to have people kind of watch what I do from start to finish because when I work, it is great for me to break out of my comfort zone, to really learn to paint while I have people spectating and I guess people enjoy the process with me that’s what I take it as now.” Intrigued how sneaker and handbag customization we talk to the artist behind The Studio Project about what it takes to brush up on a Birkin. 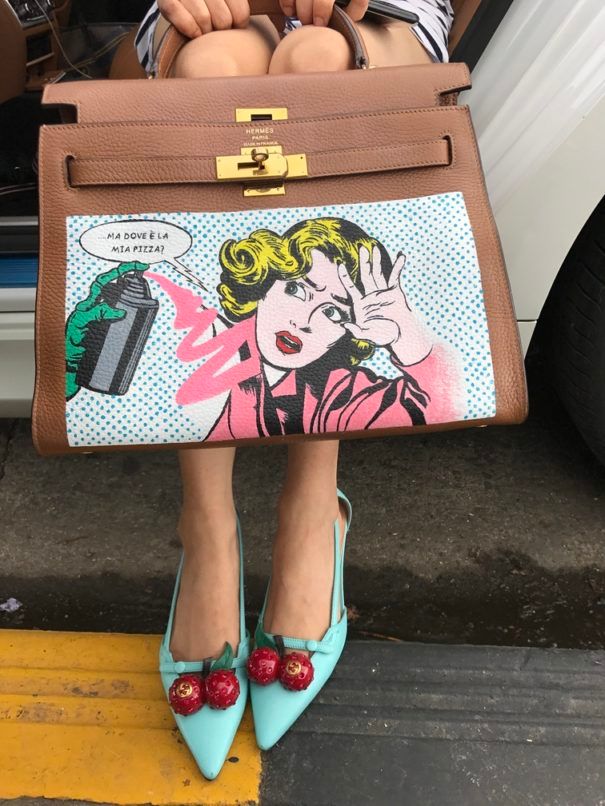 What, according to you, is the USP of The Studio Project?

I think my USP now compared to the other individuals and businesses, that are doing this in India, is my eye for detail. I’m extremely particular about the finishing of the product. If I have shown a client a digital layout of what’s something going to look like, I make sure it’s going to look that way. My best friend is a triple 0 number brush, it’s an extremely fine thin brush to make sure that I get all of the details in, as each line even if it’s straight it’s neat looks perfect and flawless. I think that something people really admire and have given me feedback on is that each piece turns out exactly like how I showed them it would be and I make sure that the finishing and quality of work are up to my very high standard of detail finish.

What was the first luxury piece you painted? Is it nerve-wracking to paint on expensive, luxury products?

The first product I painted, actually was my third project in total when I just began. It was my third project and it was a Goyard pouch, it was definitely nerve-wracking because it’s something that is very expensive and if you mess up, you have to reimburse the client and my hand was still getting used to painting on products that weren’t flat, which had their own texture, which had their own finishing. The shoes, espadrilles, passport covers, were all non-branded and they were like fold leather and inexpensive so it was a lot easier. But the fact that I got this Goyyard pouch very early on, first of all, made me feel that okay a client trusted my finishing, my work, and my painting from the little they saw enough to give me an expensive product to paint on.

It made me realize there was definitely a market for it because someone wanted it immediately irrespective of my inexperience if I may say so because it was my own third project in total, but it was exhilarating, it gave me a push and I feel like it made me get out of my comfort zone. It made me really research and understand the materials, do a whole bunch of sampling and testing before I actually paint my first stroke on that Goyyard pouch and I’m glad my client trusted me with it and I think it was a game-changing move in my business.

What is the most memorable piece you’ve created?

There are a bunch of memorable pieces, I think a lot of the pieces have a lot of interaction with the clients and a lot of storytelling from their end that makes it so much more exciting to get to convert their stories, ideas, and dreams into painted reality, what I like to call it. One of my most memorable is a painting in Hermès Kelly which I did in my pretty early days. It was a huge thing, the entire front of the bag, we blocked out, painted, and did a piece of pop art, talking about the client’s love for pizza, which is something that I resonate with so much because I am a die-hard pizza fan too. So that is definitely a memorable piece, it was one of my favorites because it turned out so well, I was obviously nervous since it was my first Hermès bag that I did back then. But the fact that I was able to overcome my fear of painting it, I stared at it for a week before I started, I had everything in place with the materials, testing the sampling with everything but just being able to take that step and do my first Hermès and it turned out wonderfully the client is very happy and obviously talking about pizza made it special.

Is there a cool or unique piece you’ve customized for a celebrity client?

I have created a couple of pieces for Nita Ambani and Sonam Kapoor. I did a cool piece for Samantha, where I painted a portrait of her puppy on her LV stroller bag and the hashtag was #ChroniclesOfHash, which is the name of her dog.  Another one was where I did something really cute for Sonam Kapoor, she wanted to gift Shahrukh Khan some trunks, so I did graffiti art on those which were really cool to paint on, which was not a luxury product but more gifting chunks. So, I painted a jacket for Ayushman Khurana, for the promotion of one of his movies, which was this multi-colored rainbow piece and I absolutely loved it and he rocked amazingly.

Sneakers Handbags Customisation hermes birkin bag
Akshita Nahar Jain
Sr Associate Editor
Akshita Nahar Jain has worked with various publications, including Elle, Harper’s Bazaar Bride, and Time Out Delhi, and written extensively on fashion and lifestyle. A sucker for alliteration and stylish sitcoms, she enjoys scrolling the web for less travelled destinations.
Sign up for our newsletters to have the latest stories delivered straight to your inbox every week.