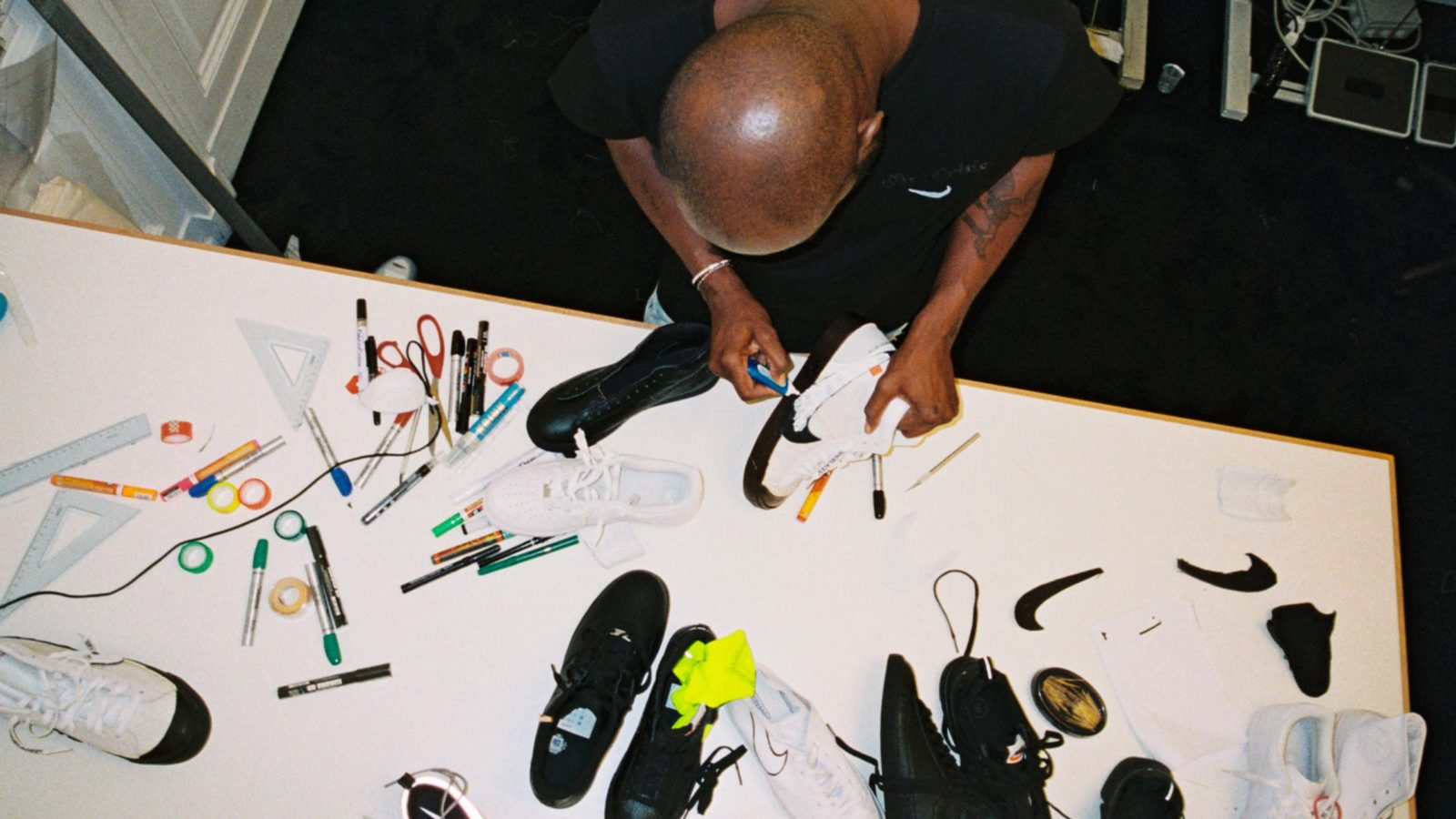 “My own personal thing is I’m not a sneakerhead,” said Virgil Abloh in a 2017 lecture at Harvard. “I just wear the same shoes for a really long time, and then I just go on to another. But I understand the sort of passion for them.”

It’s not an over-exaggeration to say nobody else has changed the sneaker game quite like Virgil Abloh.

At the helm of Off-White, the creative polymath ignited a frenzy over sneakers that the world hadn’t seen since the days when Michael Jordan was still a basketball player. Just like the superstar athletes of the ’80s and hip-hop stars of the ’90s, Abloh birthed a new generation of sneaker collectors through his collaborations with Nike, taking names like “Air Force 1” and “Air Jordans” into the mainstream vernacular.

There wasn’t a single sneaker design by Abloh that didn’t get everyone talking, regardless of whether it was a hit or a miss — and they were mostly hits, as evidenced by the rising demand for his limited-edition shoes in the days since his passing. Below, we look back on some memorable moments from the Louis Vuitton designer’s vast legacy of footwear releases. 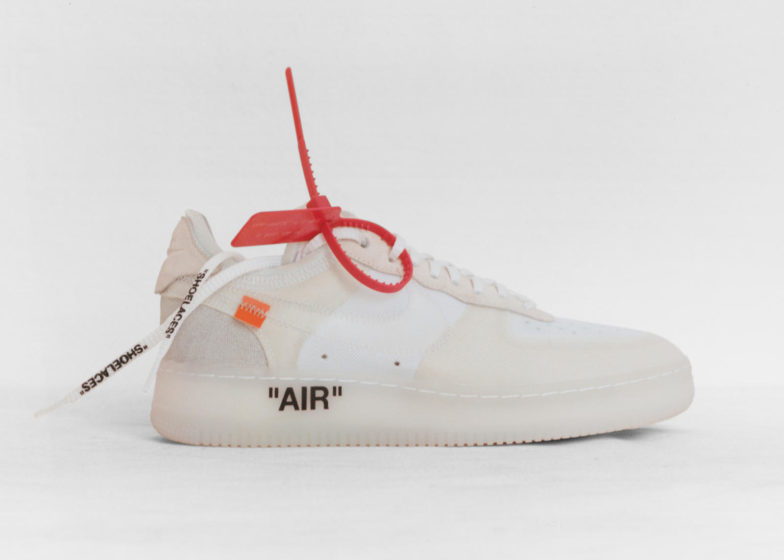 Virgil Abloh’s influence on modern-day sneaker culture can be traced back to The Ten, his first collaboration with Nike. As part of the project, Abloh reworked 10 classic Nike silhouettes — starting with the Air Force 1. On his first meeting with the sportswear giant in 2017, Abloh retooled a triple-black pair, exposing the foam inside the tongue and scribbling on the shoes with a marker. He and his Off-White design team would debut the custom shoes at Design Miami to launch Off-White Furniture. For The Ten, Abloh used the same deconstructionist approach, creating a translucent pair of AF1s that were noticeably labelled with “AIR” along the midsoles. 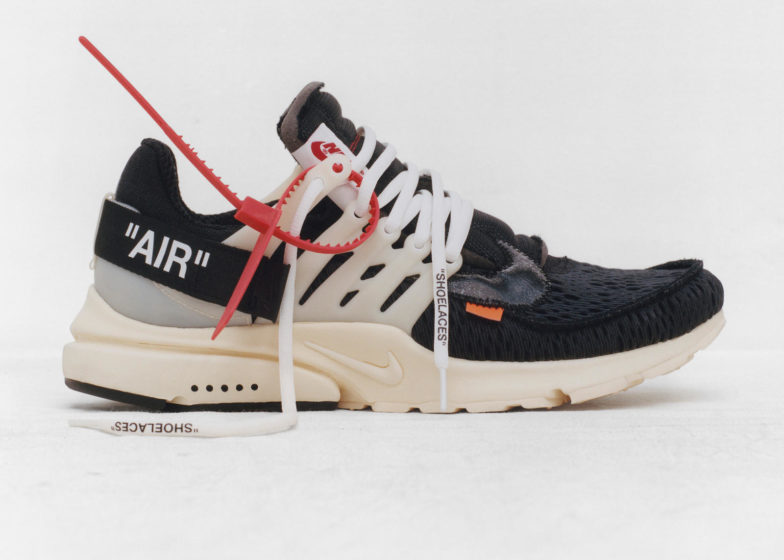 Many seasoned sneakerheads consider this, not the much-hyped AJ1s, to be the pinnacle of The Ten. Abloh took a seriously underrated silhouette by legendary Nike designer Tinker Hatfield and transformed it into something that looks modern, even today. In fact, you can credit the recent revival of Air Presto shoes to Abloh’s 2017 design, which were wearable, well-designed and essentially said, “If you know, you know.” And nobody captured that better than musician Frank Ocean, who wore these Nikes during the Panorama Music Festival in 2017. 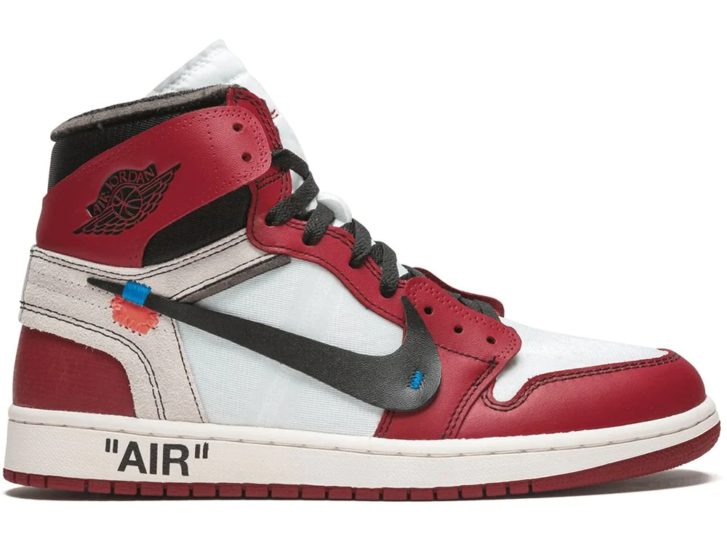 The Air Jordan 1 was already a big deal on its own, with so much of its significance tied to the sports legend Michael Jordan. In 2017, Virgil Abloh made it even bigger when he reworked the basketball shoes for The Ten. Abloh took an X-Acto knife to their soles, smacked an “AIR” label over them and added his signature zip-tie to the laces — all in a single sitting. Their impact, though, was phenomenal: the shoes sold out instantly and were snapped up by celebrities like Beyoncé, Drake and even Michael Jordan himself. And they are still very much in demand, with prices surging to over US$7,000 (Approx. HK$54,540) on resale platforms over the last few days. If there were a single pair of sneakers that could define Abloh’s career, these kicks are it. 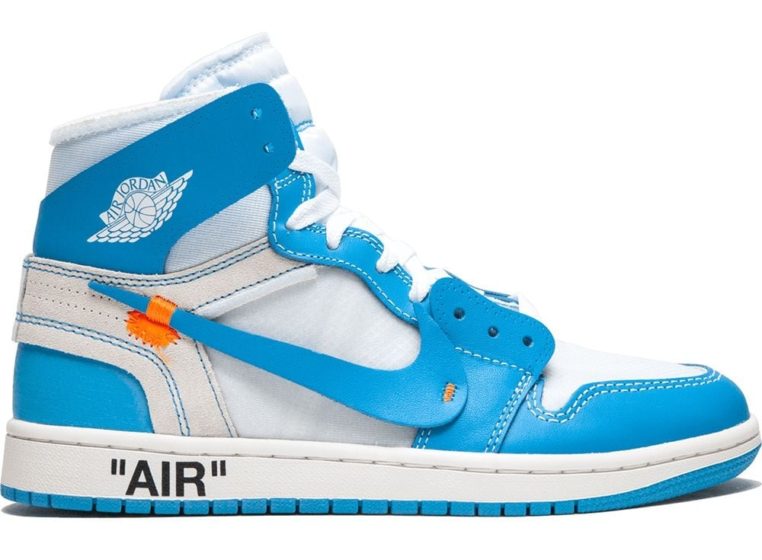 Abloh’s Air Jordans are the most sought-after styles from his collaborations with Nike, and from the Jordan Brand in general. His third interpretation of the shoes, launched in 2018, was an instant hit. The pair came in the striking University Blue colourway — a nod to the University of North Carolina, the college that Michael Jordan attended — which Abloh contrasted with orange stitching and a red zip-tie. Being more accessible than his coveted AJ1 “Chicago” pair, these shoes allowed even more people to ride the wave of his hype. 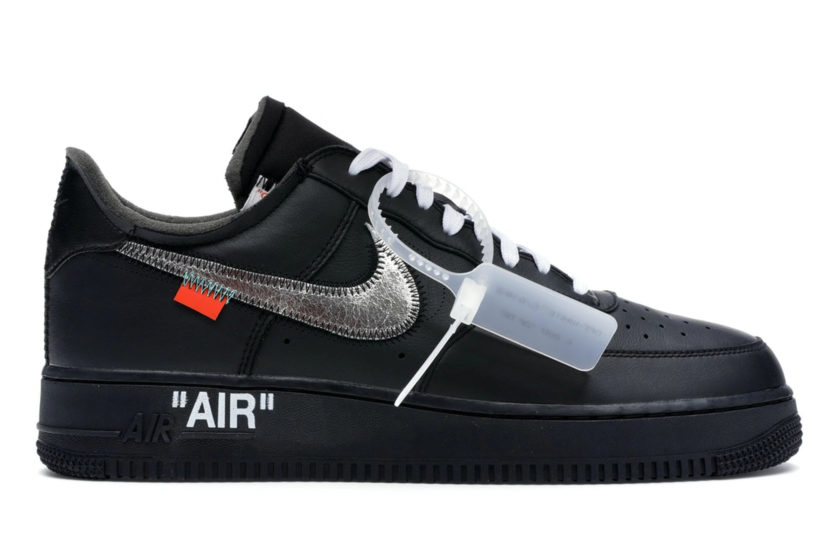 “[Sneakers] are on the same level as a sculpture of David or the Mona Lisa,” said Abloh in a press release for his The Ten series. The Museum of Modern Art (MoMA) clearly agreed, because two years later the New York art institution invited him to create a limited-edition sneaker for its exhibition, Items: Is Fashion Modern? These all-black AF1s were offered through the MoMA Design Store, including a pair of custom socks and tickets to the exhibit. Because of their rarity, they were soon resold for as high as US$15,000 (approx. HK$116,873). The shoes also marked a full-circle moment for Abloh, who always compared himself to an artist. 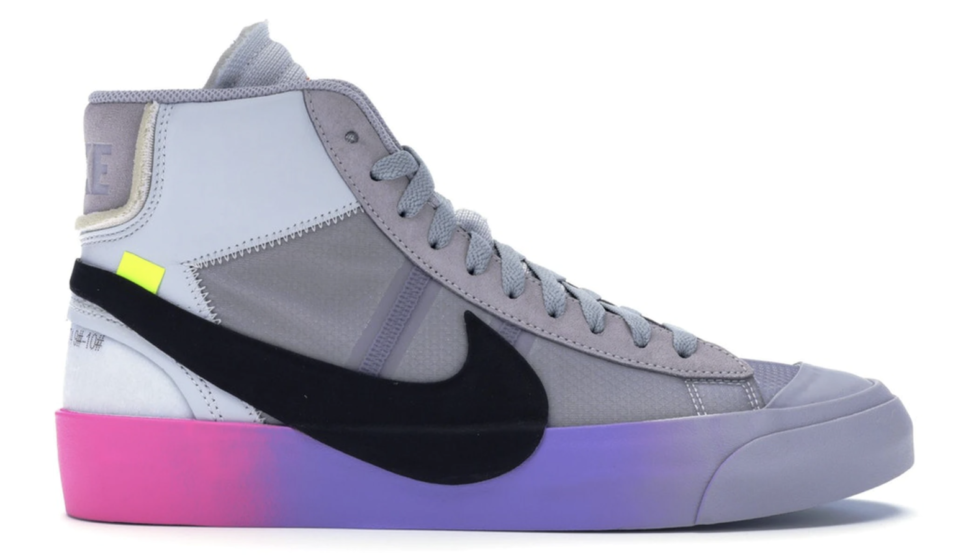 Abloh’s “Queen” collection for tennis champion Serena Williams is one for the history books. Besides sportswear, like the tutu dress that Williams wore to the 2018 US Open, Abloh created three sneakers for the athlete, including this distinctive pair of Blazer Mids. The shoes featured an oversized black Swoosh, neon accents inspired by the tennis ball, and a midsole in a pink and purple gradient. At the time, Abloh had already begun using colourful gradients as a symbol of diversity in his menswear collections for Louis Vuitton, with the most memorable example being his debut Paris fashion show in 2018. 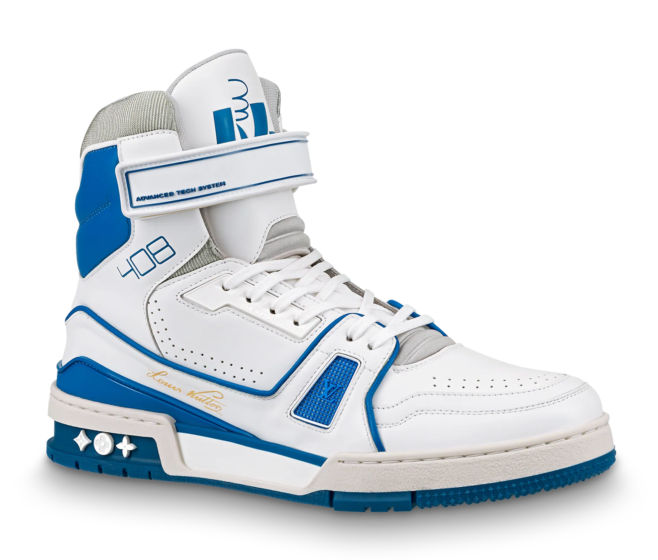 Virgil Abloh ushered in a new era of luxury fashion at his debut Louis Vuitton show, where he unveiled the Louis Vuitton 408 Trainer. To create the first sneakers for the French luxury brand, he took cues from vintage basketball shoes such as the Air Jordan 3 and the AVIA 880. He added Louis Vuitton branding through the monogram flowers on the outsole, the signature script on the side and a “408” label that referenced the label’s date of birth. Each shoe required over six hours and 106 different pieces to be made by the hands of Italian artisans. That level of craftsmanship and their association with both LV and Abloh, justified the shoes being priced in the thousands. 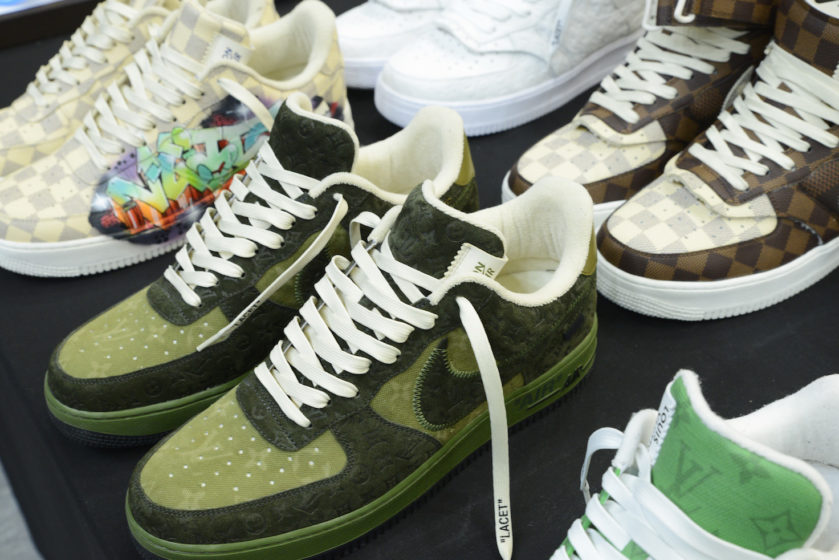 For his last Louis Vuitton collection, Abloh included a collaboration with Nike. He remixed the latter’s Air Force 1 sneakers in 21 new colourways, incorporating both his go-to air quotes, as well as Louis Vuitton’s monogram and Damier checkerboard pattern. The collaboration is the first of its kind, comparable to the French luxury brand’s record-breaking tie-up with Supreme in 2017. Following Abloh’s passing, the Louis Vuitton x Nike Air Force 1 collection will no doubt become an even bigger deal when it finally launches next year.