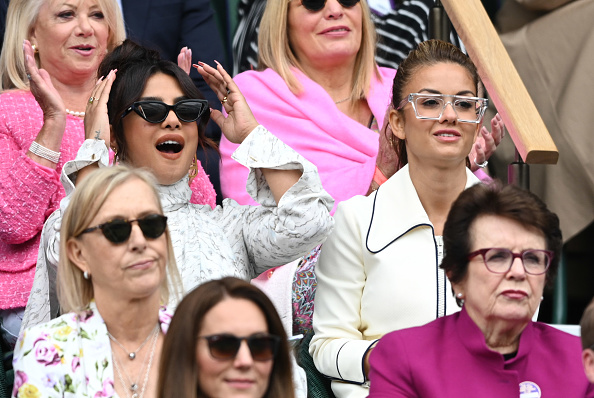 You’ve been served with stylish Wimbledon 2021 looks that are a total win-win!

Style
You’ve been served with stylish Wimbledon 2021 looks that are a total win-win!
Share this article
Next article

If you missed seeing Deepika, Sonam and Aishwarya dazzle on the red carpet at Cannes, then here’s your shot at getting your fashion fix. As sporting events open up to the public, the Wimbledon Tennis Championships 2021 at the All England Lawn Tennis and Croquet Club drew a lot of attention, buzz, and celebrity spotting. We shortlist our favourite looks on and off the court.

PCJ’s second sighting at the Wimbledon was in a Ralph Lauren snakeskin silk blouse and pants styled with The Ricky Bag.

Priyanka Chopra Jonas saw the match with her old buddy, Natasha Poonawalla, the wife of Adar Poonawalla – the CEO of India’s largest vaccine maker Serum Institute of India. Natasha, known for her eclectic sartorial choices, was dressed to the nines in a Gucci two piece suit with sheering collar. Both of whom sat in the Royal Box right behind Kate Middleton.

Previously, Kate Middleton was also spotted in an emerald green Emilia Wickstead dress with white with her favourite white Gianvito Rossi pumps as a nod to the tournaments’ rich history.

When it comes to eye candy off the court, many of the Wimbledon attendees also doubled up to cheer on England at Wembley to cheer for England vs Italy’s historic final. Hollywood star Tom Cruise was spotted at Wembley along with footballer David Beckham.

Astutely dresses as always, David Beckham was spotted in a Ralph Lauren Purple Label cream silk and linen double-breasted blazer with navy wool trousers, a silk tie, and a striped dress shirt from the brand.